WASHINGTON — Two F-35As, accompanied by about 20 supporting airmen, arrived at Ämari Air Base, Estonia, on Tuesday for familiarization training in the region, according to a U.S. Air Forces in Europe statement.

"The deployment has been planned for some time, has no relations to current events, and was conducted in close coordination with Estonian allies," the statement said. A USAFE spokeswoman confirmed to Defense News that, under current plans, the deployed F-35s will not take part in Baltic-based NATO air-policing missions.

On Monday, the Estonian public broadcaster ERR reported that an undisclosed number of F-35As were heading to the Estonian air base and, after landing, would be in the country for "several weeks" to conduct training flights with aircraft from the U.S. and allied militaries.

A spokesman for the Air Force had previously declined to confirm the deployment or F-35s' movements to Defense News until after the jets landed. 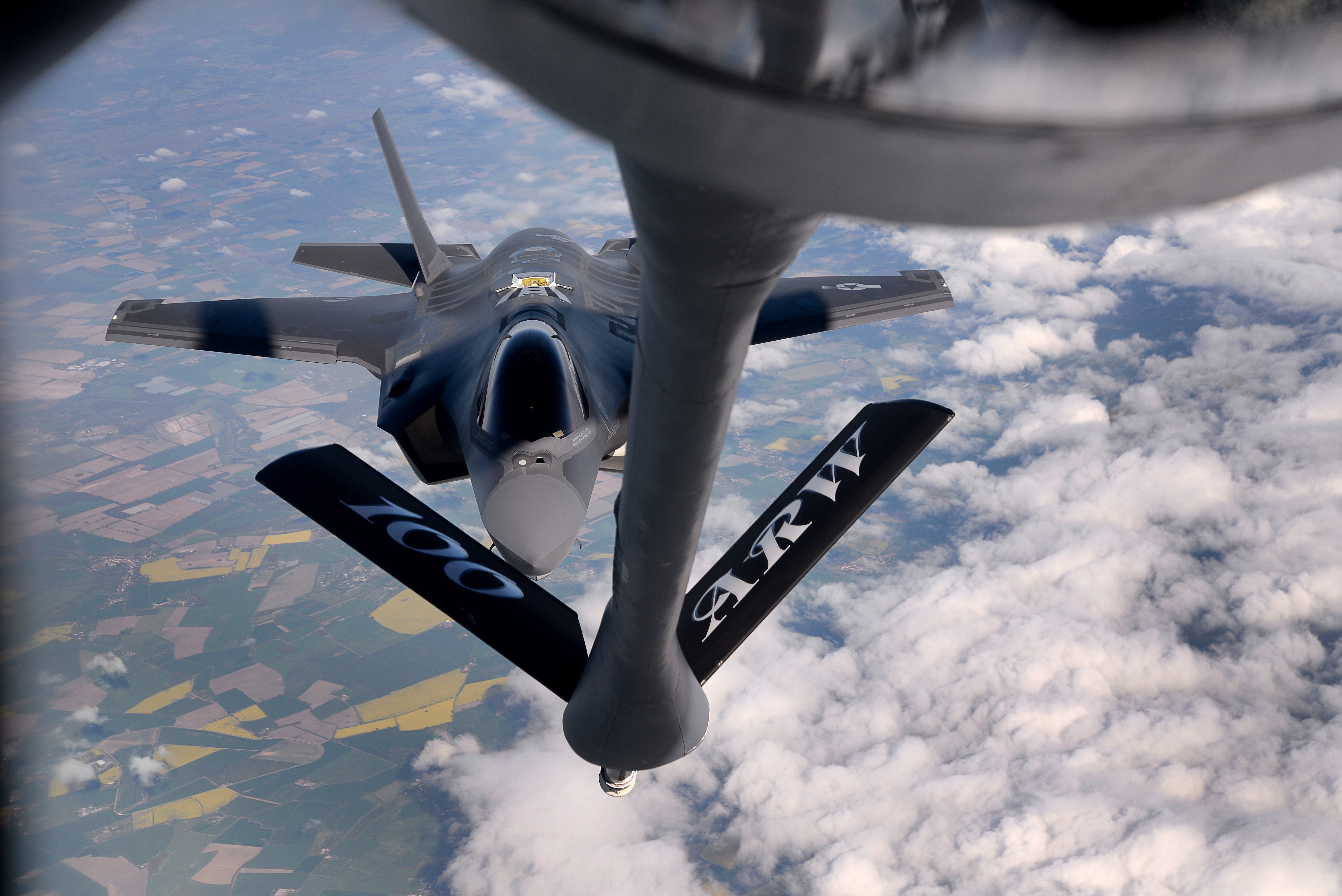 A U.S. Air Force F-35 Lightning II from Hill Air Force Base, Utah, is refueled by a 100th Air Refueling Wing KC-135 Stratotanker during a flight to Estonia on April 25, 2017. The F-35s are participating in their first-ever flying training deployment to Europe.
Photo Credit: Senior Airman Christine Groening/U.S. Air Force
The Air Force’s version of the joint strike fighter is in the throes of its first international training deployment. Eight F-35As from the active-duty 34th Fighter Squadron and Reserve 466th Fighter Squadron have deployed from Hill Air Force Base in Utah to RAF Lakenheath in England since April 15.

The F-35’s trip to Europe is being conducted under the auspices of the European Reassurance Initiative — the Defense Department’s buzzword for a series of exercises and training opportunities with NATO allies meant to signal strength to Russia and improve interoperability.

The F-35’s trip to Estonia came as a surprise to the public, and possibly to Russia as well.

In a conference call last week with reporters, Air Force officials disclosed that the "A" model’s first European deployment would take place predominantly in the United Kingdom, with exercises over U.K. airspace. However, officials noted that the service also planned several "out and back" flights to other NATO nations that would help familiarize pilots with the region.

Ämari Air Base is located in Harjumaa, a county in northwestern Estonia and about a three-hour drive from the Russian border. The base has hosted squadrons of aircraft from NATO countries as well as F-22s, which visited the base in 2015 while conducting patrols of the Baltic states’ airspace.

Last week, Air Force officials said there were no plans for the aircraft to be involved in Baltic air-policing missions meant to safeguard the skies above Estonia, Lithuania and Latvia. However, the service has always maintained that the joint strike fighter is operational and could be called into combat or other operations if needed.

The DoD has made several major demonstrations of air power over the past month, including Tomahawk strikes in Syria and the use of the Massive Ordnance Air Blast for the first time in Afghanistan. The movement of F-35s to the Baltic nations would also doubtlessly be seen as a message to Russia about the U.S. military’s strength during a time when the countries’ relationship appears to be eroding.

Valerie Insinna was Defense News' air warfare reporter. Beforehand, she worked the Navy and congressional beats for Defense Daily, which followed almost three years as a staff writer for National Defense Magazine. Prior to that, she worked as an editorial assistant for the Tokyo Shimbun’s Washington bureau.

After finishing up at Black Flag, the Australian Wedgetail flew to Tyndall Air Force Base to take part in an air-to-air live fire evaluation event.

The 1960s-era design continues to transform.

A small, yet nimble and heavily used light-attack helicopter that carries small teams of special operators into battle has a problem.