Meet the Army's Soldier and NCO of the Year

Spc. Robert Miller and Sgt. 1st Class Joshua Moeller on Monday were named the Army’s 2016 Soldier of the Year and Noncommissioned Officer of the Year, respectively.

The soldiers were selected after this year’s Best Warrior Competition, which kicked off Sept. 26 at Fort A.P. Hill, Virginia.

The winners were named during a special luncheon at the Association of the United States Army’s annual meeting in Washington, D.C.

"I was in total disbelief," Miller said about hearing his name called. "When I looked around at the other guys I was competing against, I thought there was no way. It was just unreal."

Moeller said he felt shock and relief when his name was called.

"There were some really strong competitors. You’re talking about the 10 best NCOs and 10 best soldiers in the entire Army," he said. "The margins for error there are minuscule at best."

Both men were gratified that months of preparation had paid off.

"It’s been a long time and a lot of rounds downrange," Moeller said.

Also honored during the lunch was retired Lt. Gen. David Grange Jr., who is this year’s honorary Sergeant Major of the Army.

The honorary SMA title was born when Sergeant Major of the Army Dan Dailey wanted to honor an individual who had demonstrated lifelong support and commitment to the NCO corps, the Army, soldiers and their families.

The title is bestowed once a year and only with the approval of three acting or former SMAs.

"I’m overwhelmed," Grange said Monday. "I’ve had many great things happen to me in this great Army of ours, but this has got to take the cake. It’s a wonderful honor, and I am truly overwhelmed."

Grange, a legend in the Army Ranger community, served as an enlisted man for seven years before receiving his commission. A member of the Ranger Hall of Fame, Grange is a veteran of 20 campaigns in three wars as an infantryman.

He served as a parachute infantryman in Europe, participating in the Rome-Arno, Southern France, Rhineland, Ardennes and Central Europe campaigns of World War II. As an officer, Grange served in Korea and three times in Vietnam. 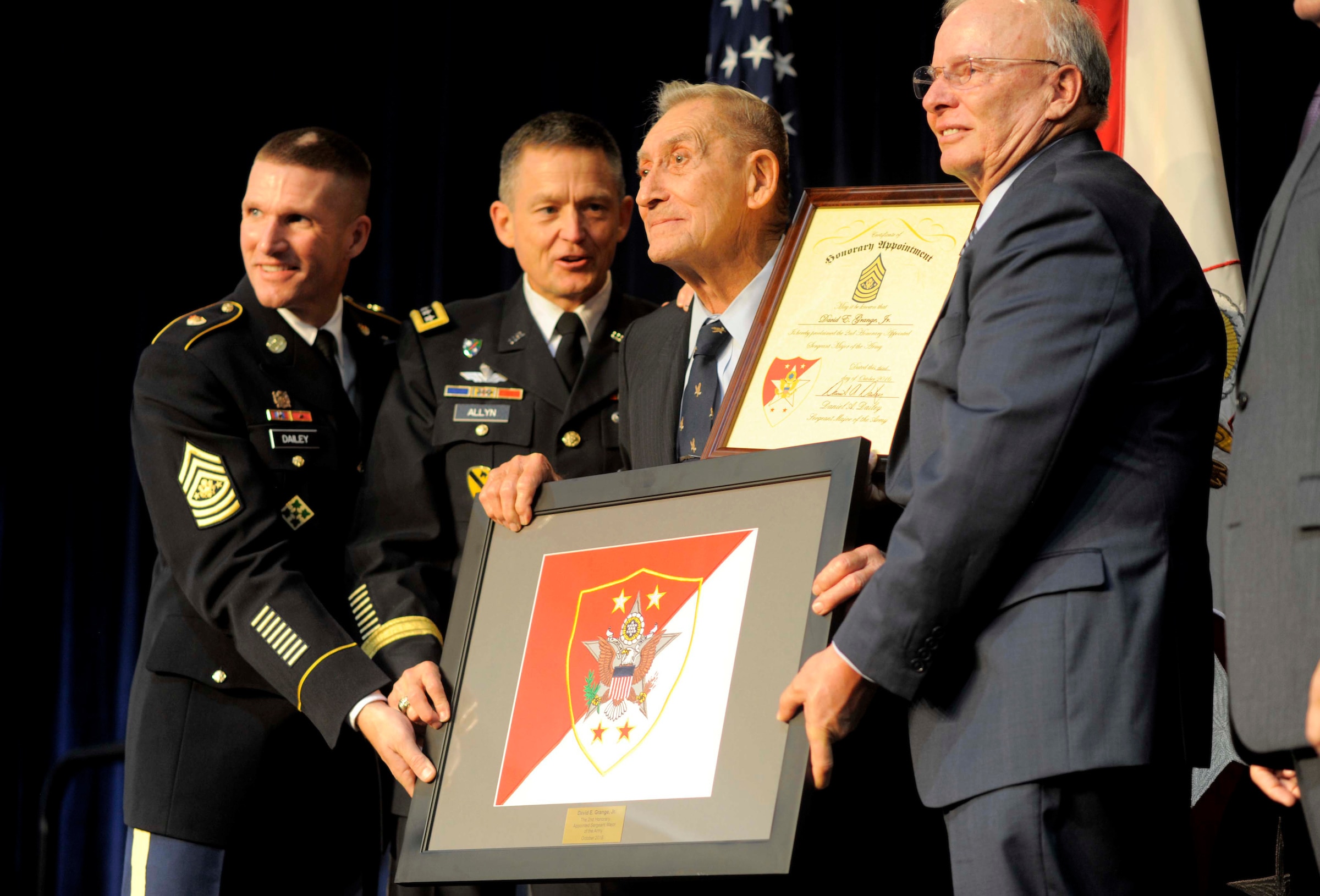 Army. Retired Lt. Gen. David Grange was honored as the 2016 honorary Sgt. Maj. of the US Army on Monday, Oct. 3, 2016.
This year’s Soldier and NCO of the Year edged out 18 other competitors during the grueling Best Warrior Competition. The soldiers, representing 10 commands from across the Army, earned their spots in the Army-level competition after mastering a series of benchmarks throughout the year at their respective units and commands.

Both Miller and Moeller said the 12-mile road march was one of the toughest events of the week.

"We got rained on from before it started until it finished," Miller said. "Every step you took, you felt like you were stepping in a puddle."

But the competitors banded together, with at least six of them marching the last six miles together.

"It was the healthiest competition I’ve ever been a part of," Miller said.

They also both encouraged other soldiers to try out.

"Ultimately, we’re all here to fight and win America’s wars, that’s the reason we wear the uniform," Moeller said. "If we’re chasing excellence every day, that’s going to benefit the Army as a whole. And at the end of the competition, whether you win or you lose, you come out a better soldier."

The soldiers and NCOs who competed in the Best Warrior Competition represent "the very best that America’s Army has to offer," said Army Vice Chief of Staff Gen. Dan Allyn, who spoke during the luncheon.

"This competition provides a venue for soldiers and noncommissioned officers to demonstrate excellence, to distinguish themselves, and exemplify to all of us through their courage, commitment and character what it means to be trained and ready, and what it means to be a trusted professional," Allyn said. "When I hear your stories, your plans and your goals, it further reinforces what makes our Army great. The Army must remain ready because, frankly, our nation depends upon it."

This is the second Best Warrior Competition since Dailey revamped the program, promising tougher, more realistic and battle-focused events.

"Everything you do in the Army should reinforce what a soldier needs to be able to achieve on the battlefield in order to win, even in competition," Dailey has said. "So the focus on shooting, moving and communicating, and soldier skills, the intent of it is to find the best soldier."

The demand for soldiers at home and around the world "illuminates why we must remain trained and ready for the missions at hand while concurrently preparing for the challenges that await us in the days, weeks, months and years to come," he said.

The growing and diverse requirements around the world "demand leaders of character, men and women who are experts in their warrior tasks, who are mentally and physically prepared for the rigors of combat," Allyn said.

Allyn also called on the soldiers and NCOs in the room to help the Army prepare for the future.

"We need you to apply the hard-won lessons from 15 years in the crucible of combat as you train our next generation," he said. "Our Army needs your candid, thoughtful feedback as we continue to grow and adapt the future force."

Lt. Gen. John Shaw said this week there’s a growing need for on-demand launch capabilities that can be leveraged to replace or augment satellites.

Housing allowances are increasing for some localities, but is it fair?

With so many platforms online, how will tomorrow’s Army share data?