The cycle, it seems, repeats itself every few months.

Spooked by Russian President Vladimir Putin’s steady modernization of his military forces, Western military personnel and security experts routinely sound the alarm on Kremlin procurements. Particularly following Moscow’s adventures in eastern Ukraine, two questions persist: What might Russia do with its increasingly capable hardware, and how will NATO members respond?

The most recent episode played out in the British Parliament. On July 5, the House of Commons’ Defence Committee issued a report claiming that London’s armed forces find themselves increasingly outgunned by the Russian military, which they claimed to be making massive strides in asymmetric combat capabilities — such as electronic warfare and area denial.

But asymmetric capabilities — which also focus heavily on cyberwarfare — are just a piece of the puzzle. Significant attention is being paid to Russian conventional and nuclear rearmament.

Click here for our full coverage of the Defense News Top 100, including our interactive list of companies

According to experts cited in the report, Russia has the ability to mobilize more than 40,000 troops in three days. It is a capability developed by Moscow’s professed fears of NATO encirclement. Those fears were relied on heavily to justify its actions in Ukraine. The irony of Russia’s moves is that it has reinvigorated NATO’s collective security efforts, which lagged after the Cold War.

In response to Russian procurements and buildup, NATO has created a 13,000-man rapid response force, and the United States has led the charge on pre-deploying heavy armor to Eastern Europe to shore up what is perceived to be a weak spot in the alliance defense structure. The Russia-NATO Founding Act envisioned minimal deployments in the region.

But the British House of Commons remains unconvinced that the new NATO task force is large enough, and fast enough: "[It] has only just been formed and we are not yet convinced that it can guarantee to deploy the necessary forces within the required time-frame."

Across the Atlantic, military leaders in Washington are making similar noises. The biggest concern appears to be the Russian Navy, which has received major attention under Putin’s modernization program. Of particular concern are Russia’s Borei- and Yasen-class nuclear-powered submarines, and the threat they pose to US surface fleets.

"The Russians are building a number of stealthy hybrid diesel-electric submarines and deploying them around the theatre," US Adm. James Foggo told The National Interest in June. "They’re a concern for us and they’re highly capable — and they’re a very agile tool of the Russian military."

Foggo argued that the US needs to focus its efforts on countering Russia’s new submarines, which he classified as part of a growing area-denial/anti-access bubble in the Baltic Sea. Similar defense arrangements are popping up in the Black Sea, and in the Mediterranean.

"At sea, anti-submarine warfare is the top priority," said Michael Kofman, a Russian military expert at the CNA think tank. In terms of countering other elements of Russia’s growing area-denial capabilities, Western priorities are shifting toward long-range standoff weapons that would allow for operation from outside of Russia’s air defense ranges.

"There is also a focus on drones and penetration aids, adaptations to electronic warfare, and counter-drone technologies of various stripes," Kofman said.

The main thrust of Russia’s modernization effort is its Navy — particularly the submarine fleet — and nuclear forces. While the economic crisis has forced the Defence Ministry to curtail procurement forecasts for the new T-15 Armata main battle tank, as well as the new Sukhoi T-50 (PAK FA) stealth fighter jet, submarine production and nuclear delivery systems march on.

The Kremlin originally envisioned procuring up to 2,300 Armata tanks by 2020; the Defence Ministry last year said the tank ended up being cheaper than anticipated. Updated procurement forecasts for the tank remain unknown. The picture is clearer with regard to the T-50 fighter jet. Originally, some 52 Sukhoi stealth jets were to join the Russian Air Force by 2020, but last year the number was trimmed to just 12. Meanwhile, the Air Force will lean on the stopgap Su-35 upgrade to the classic Flanker series of aircraft. 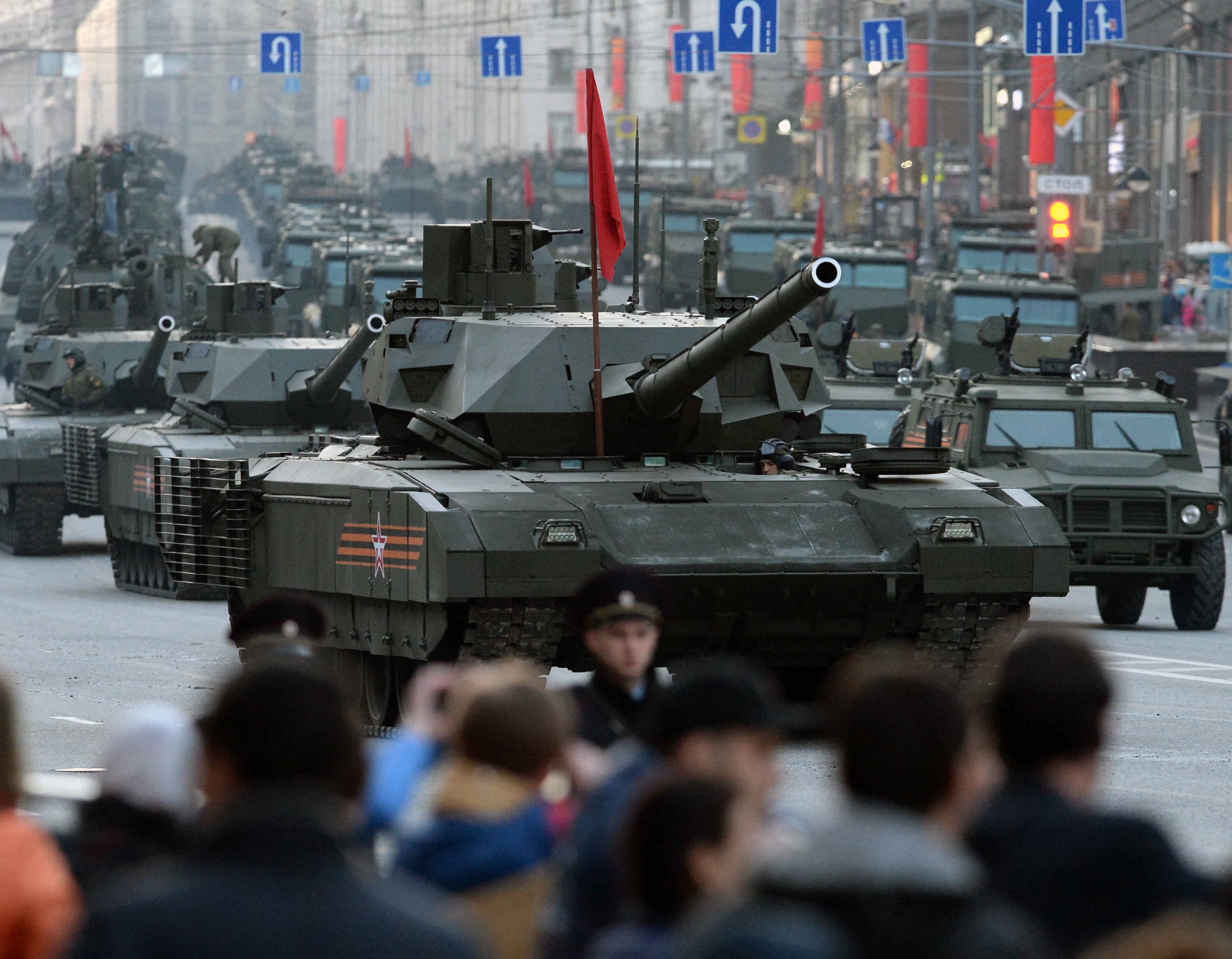 A T-14 tank with the Armata Universal Combat Platform during a rehearsal of the military parade to mark the 70th anniversary of Victory in the 1941-1945 Great Patriotic War, May 4, 2015 in Moscow, Russia.
Photo Credit: Host photo agency/RIA Novosti via Getty Images
While economic crisis has hindered some procurement plans, it has yet to reverse the trend of Russian military modernization. It remains to be seen if Russia will meet its procurement forecasts by 2020, however. Data from IHS suggest that Russia would have needed to begin increasing its military budget by an annual rate of 10 percent in 2016 to meet its goals, but spending remained flat at near-2015 levels.

At worst, this means that Russia will continue to be able to afford operating at its current levels. Its operations in Syria have demonstrated several new air-based combat capabilities and precision cruise-missile strike technologies, which the West will certainly react to in the long run. It has already demonstrated in Ukraine its skills at multidimensional warfare. But its intentions remain opaque.

Considering the Western security mindset is to assume the worst, Russia’s actions against a perceived Western threat will continue to drive the development of Western procurement and defense arrangements oriented toward Moscow. The list continues beyond area penetration and anti-submarine techniques.

"Western countries are seeking to increase firepower for armored vehicles and main battle tanks," Kofman said. "Going down to the squad level, its mostly about anti-tank guided missiles. For ground forces, people are looking for 30mm battle modules that also pack ATGMs."

Russian developments will even serve as a boon for programs like the F-35 and other fifth-generation aircraft, "since Russian air defenses largely put fourth-generation air forces out of business," he added.

Considering that these procurements will in turn be used by Moscow to justify its high-budget procurement policies amid its deep economic crisis, the story is likely to continue. 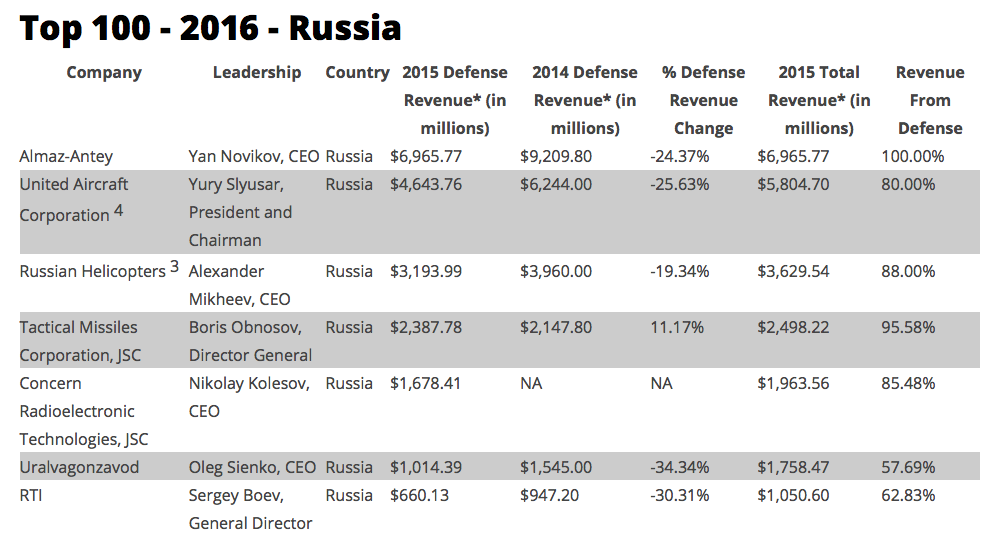 Riding the wave: Defense revenues rise despite a dark 2020

Defense revenues of the top 100 defense companies in the world climbed for a fifth straight year, a sign that fiscal 2020 was good for the industry in spite of the coronavirus pandemic and its impact on the global economy.

The list is here: Find out how global defense companies performed in FY20

Japan is continuing to push its defense-industrial base to grow as the country slowly builds up its self-defense forces to counter China’s growing military. Here are the companies benefiting from the government programs.

The German ‘new space’ industry is booming. So why isn’t Berlin buying in?

The government has articulated the importance of space, but has yet to put many actual euros behind the statement, according to analysts.

The task of converting a defense industry "sharpened to ensure defense and security" is a difficult one, but Russia's president is determined to implement evolution.

What makes the Switchblade drone lethal in Ukraine?