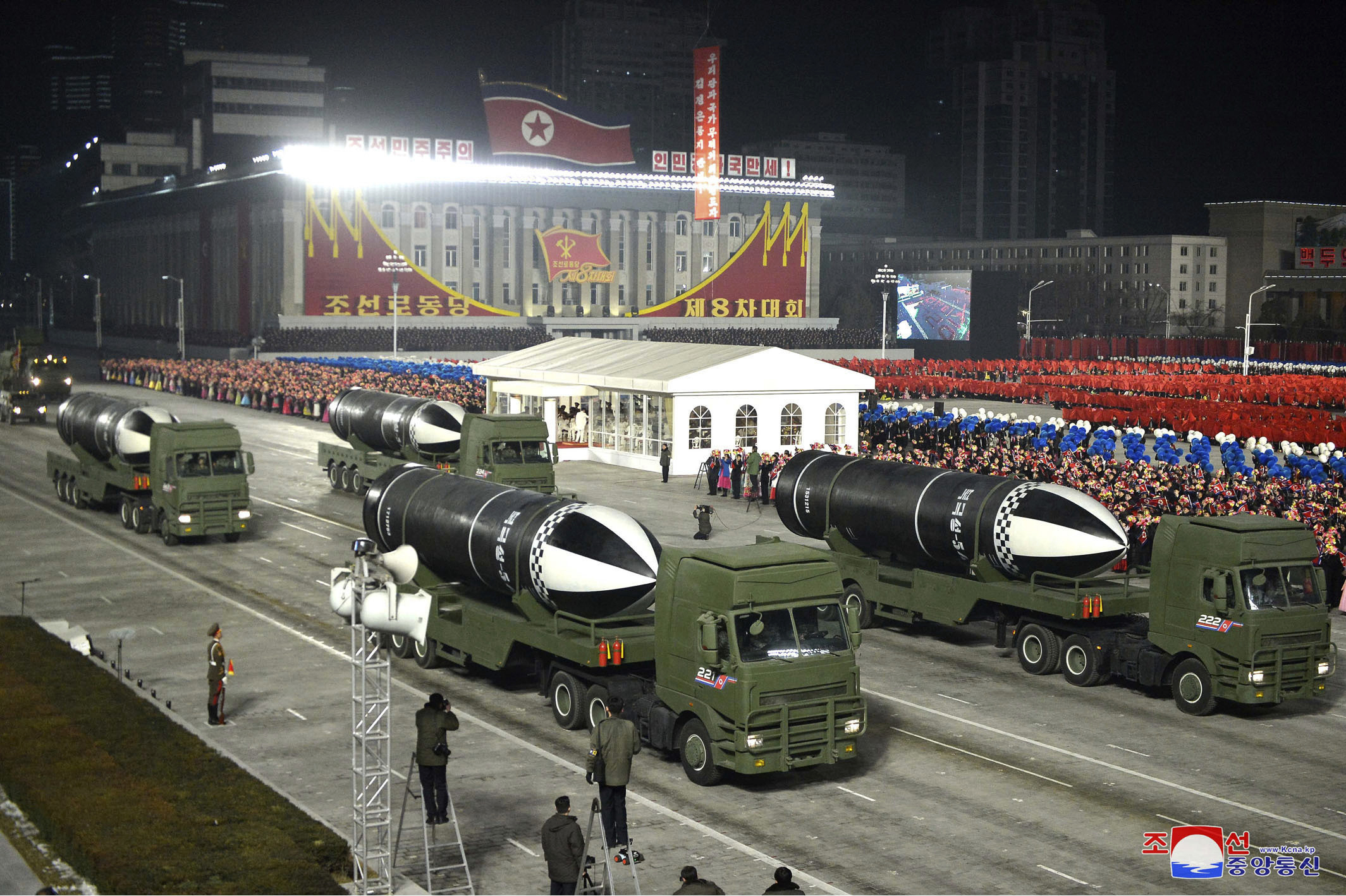 Missiles are on display during a military parade marking North Korea's ruling party congress, at Kim Il Sung Square in Pyongyang on Jan. 14, 2021. Independent journalists were not given access to cover the event depicted in this image distributed by the North Korean government. The content of this image is as provided and cannot be independently verified. (Korean Central News Agency/Korea News Service via AP)
2 of 13 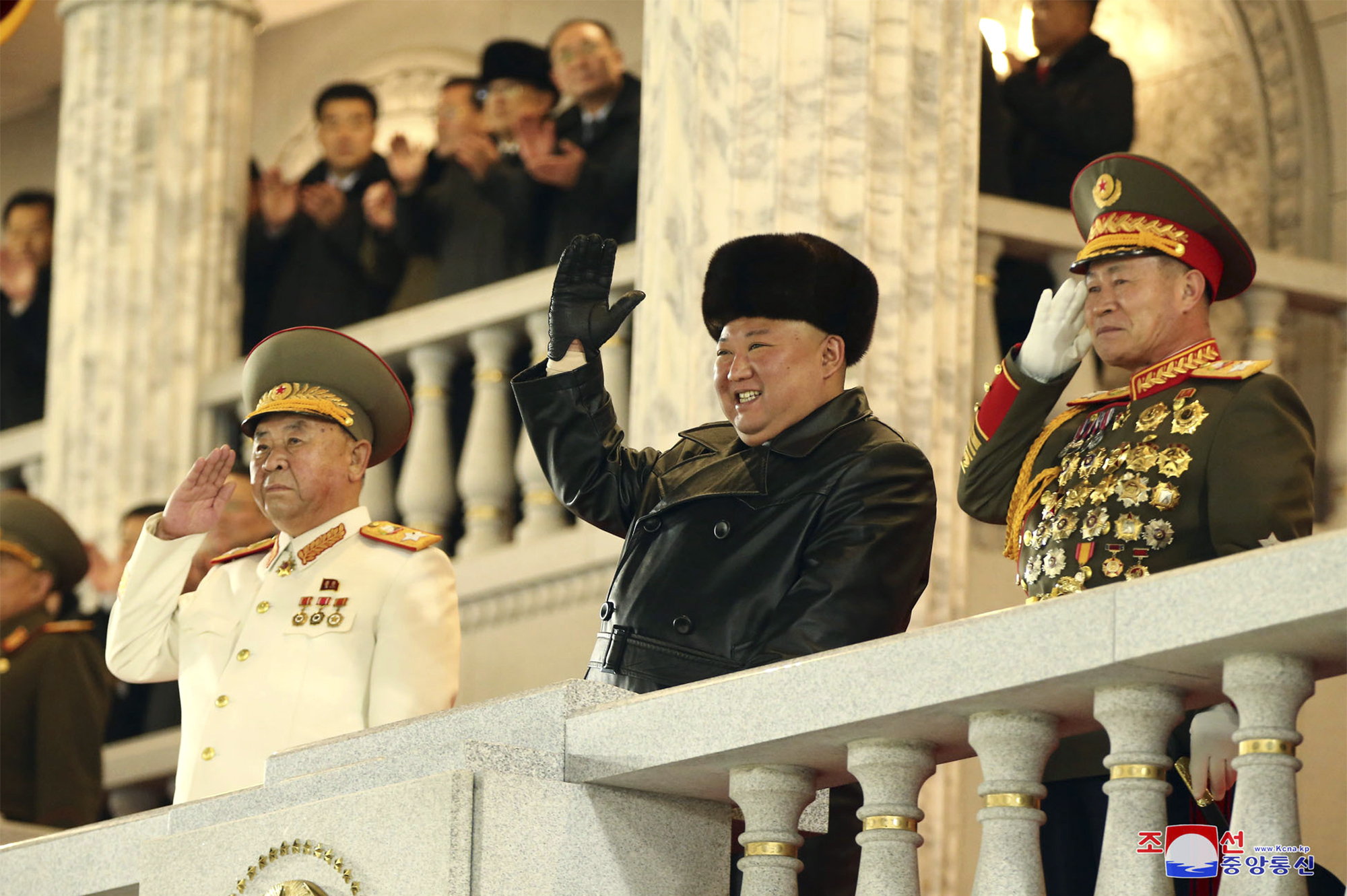 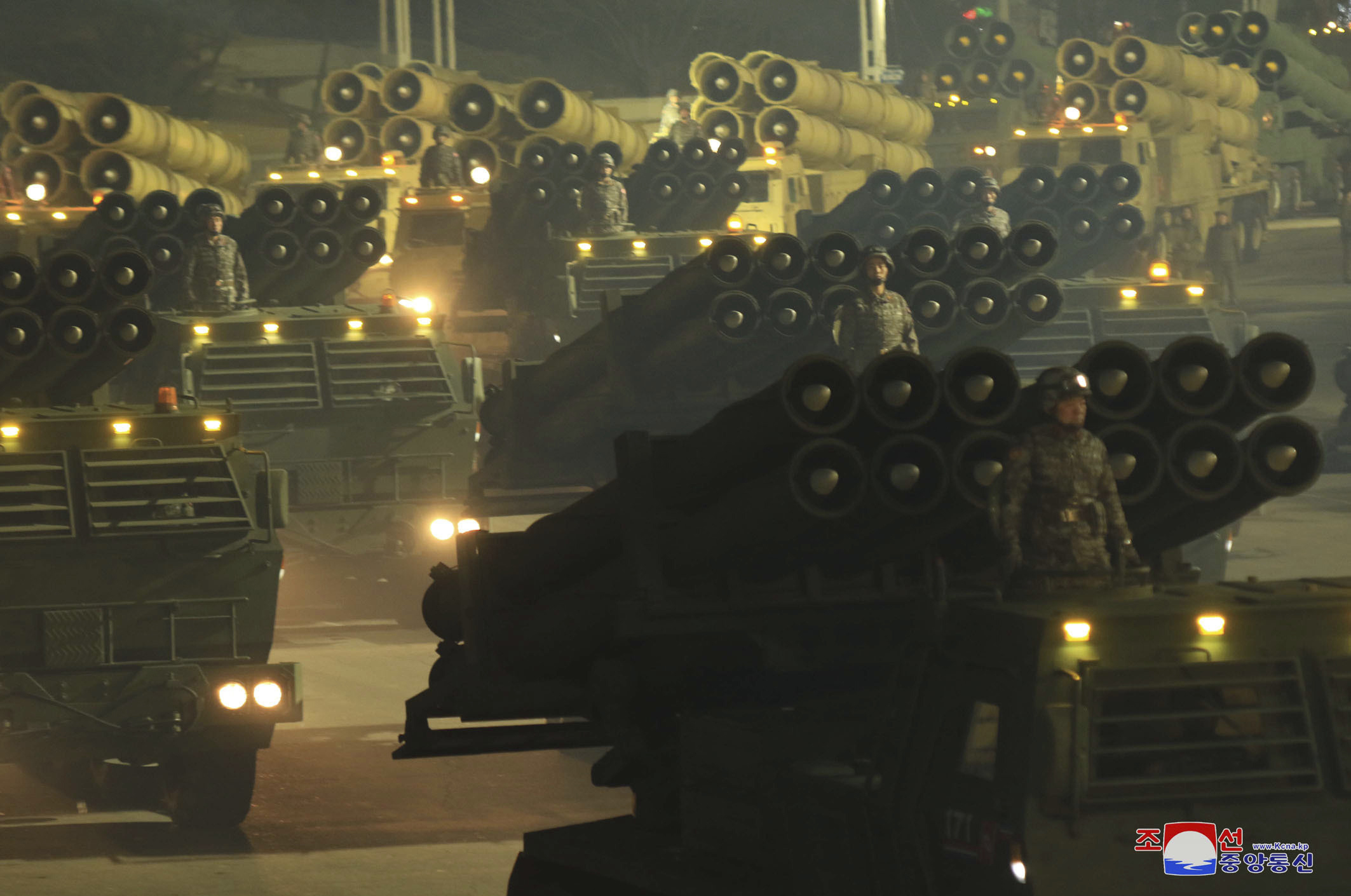 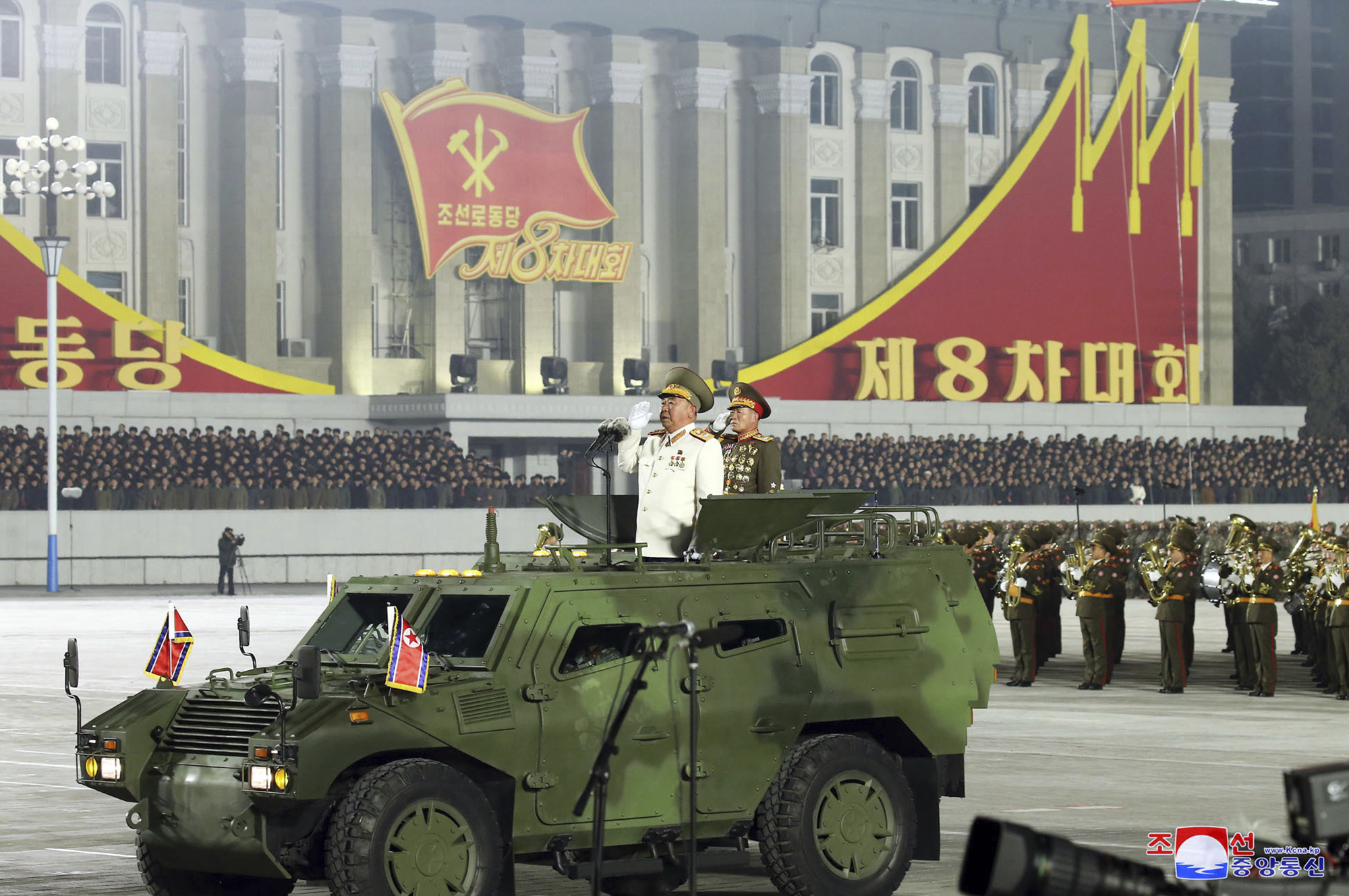 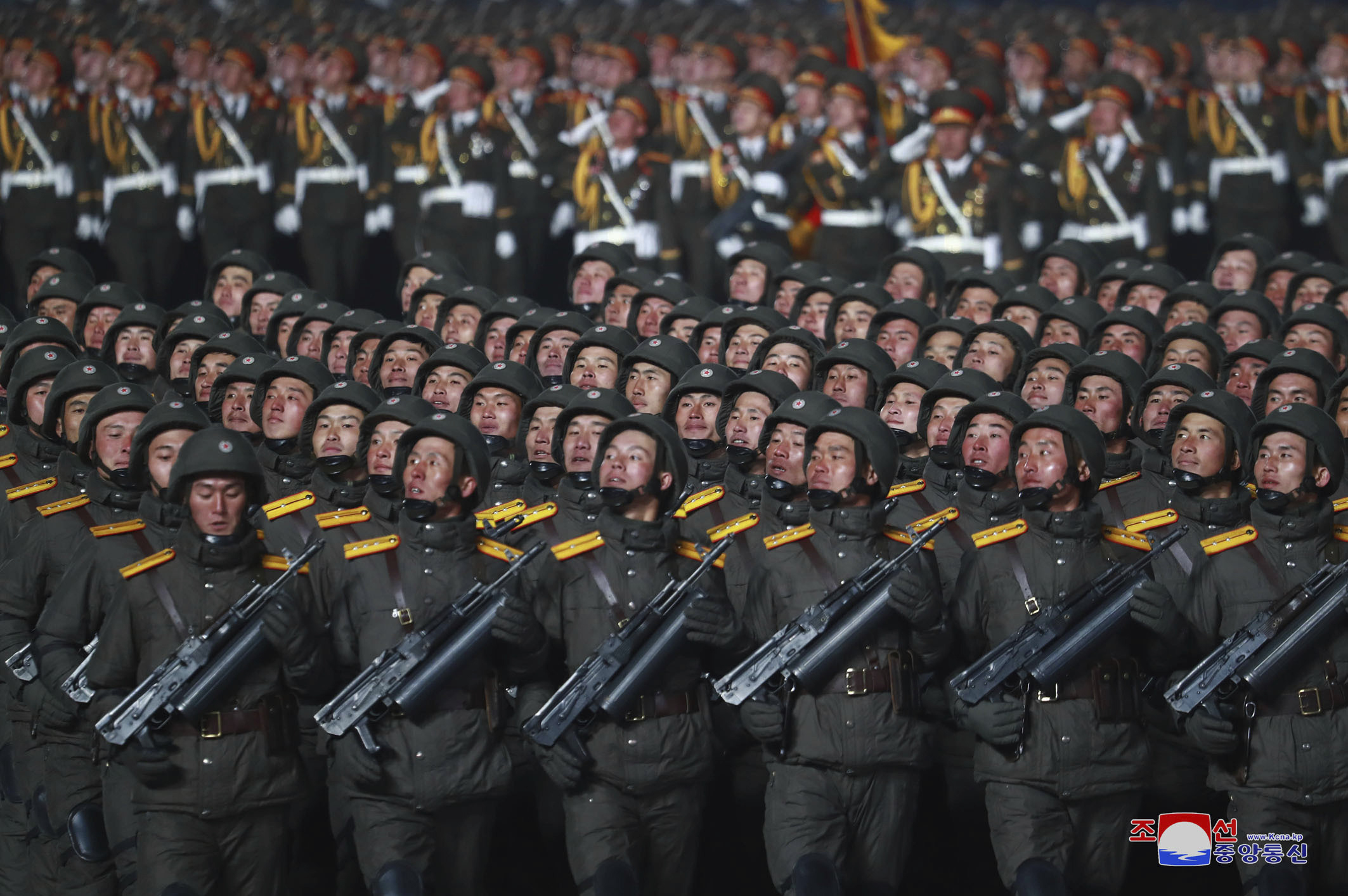 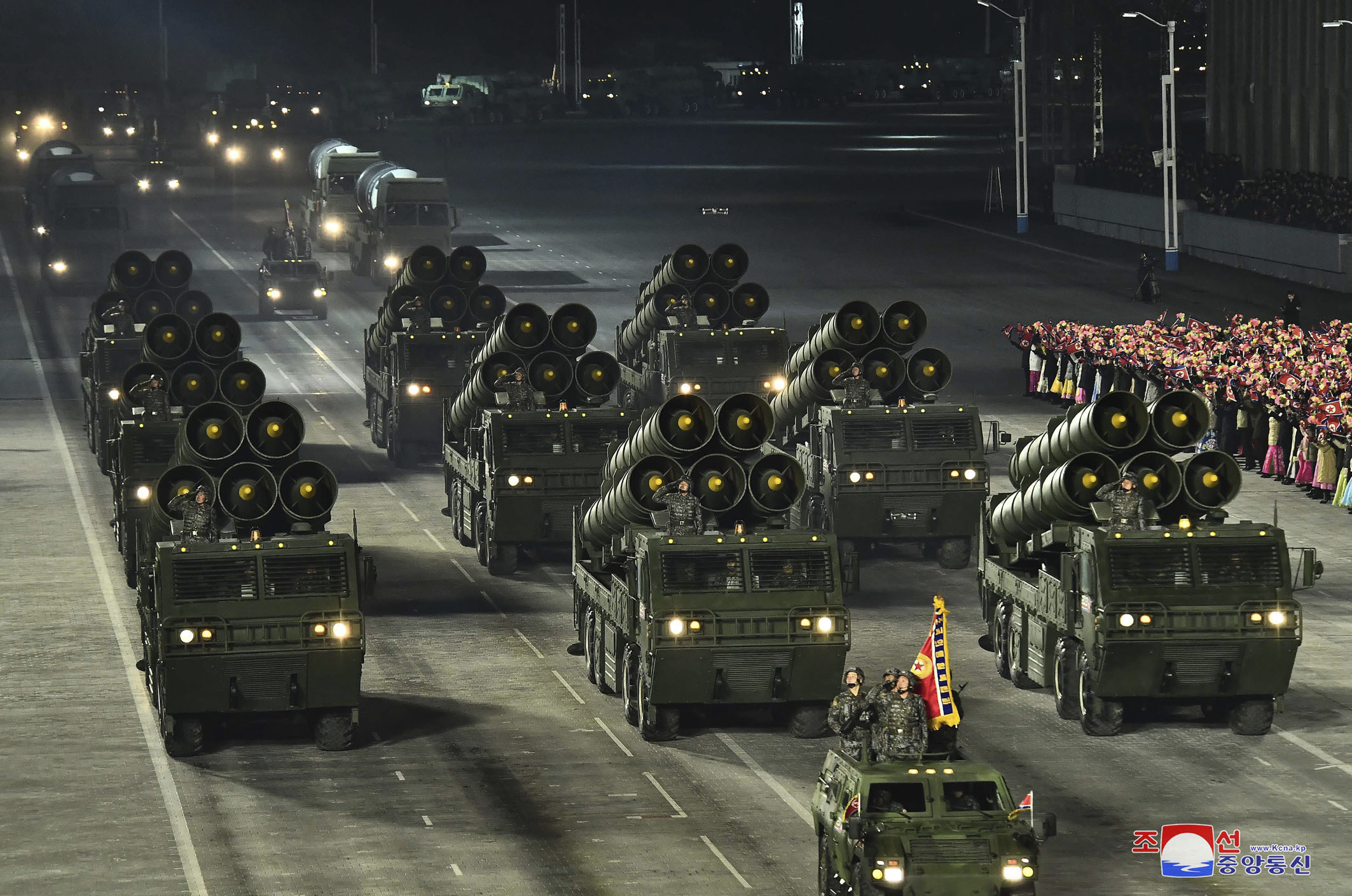 North Korea showed off weapons during a Jan. 14, 2021, parade in the capital. (Korean Central News Agency/Korea News Service via AP)
7 of 13 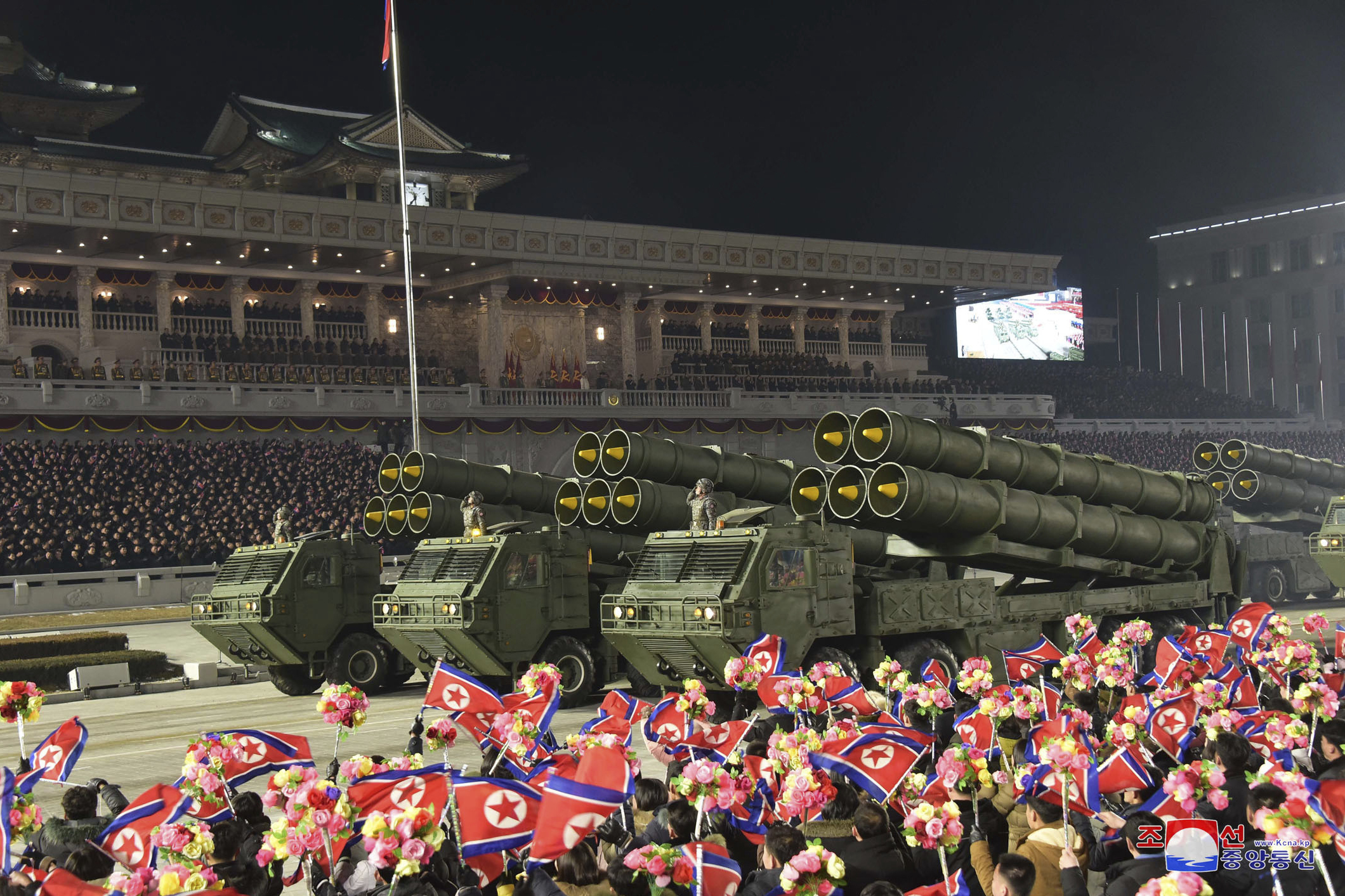 North Korea rolled out developmental ballistic missiles designed to be launched from submarines and other military hardware in a parade that punctuated leader Kim Jong Un’s defiant calls to expand his nuclear weapons program. (Korean Central News Agency/Korea News Service via AP)
8 of 13 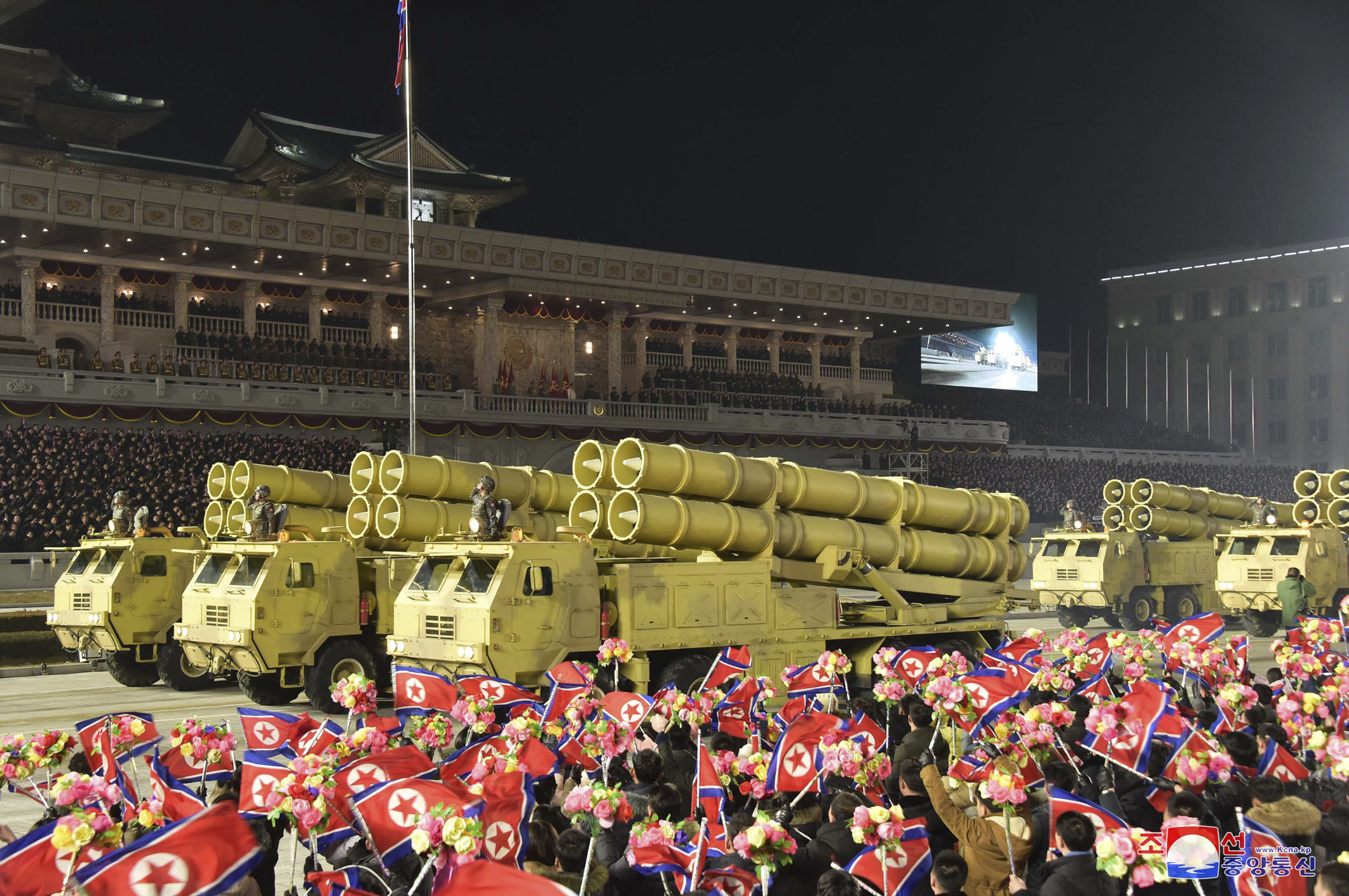 Independent journalists were not given access to cover the event depicted in these images distributed by the North Korean government. (Korean Central News Agency/Korea News Service via AP)
9 of 13 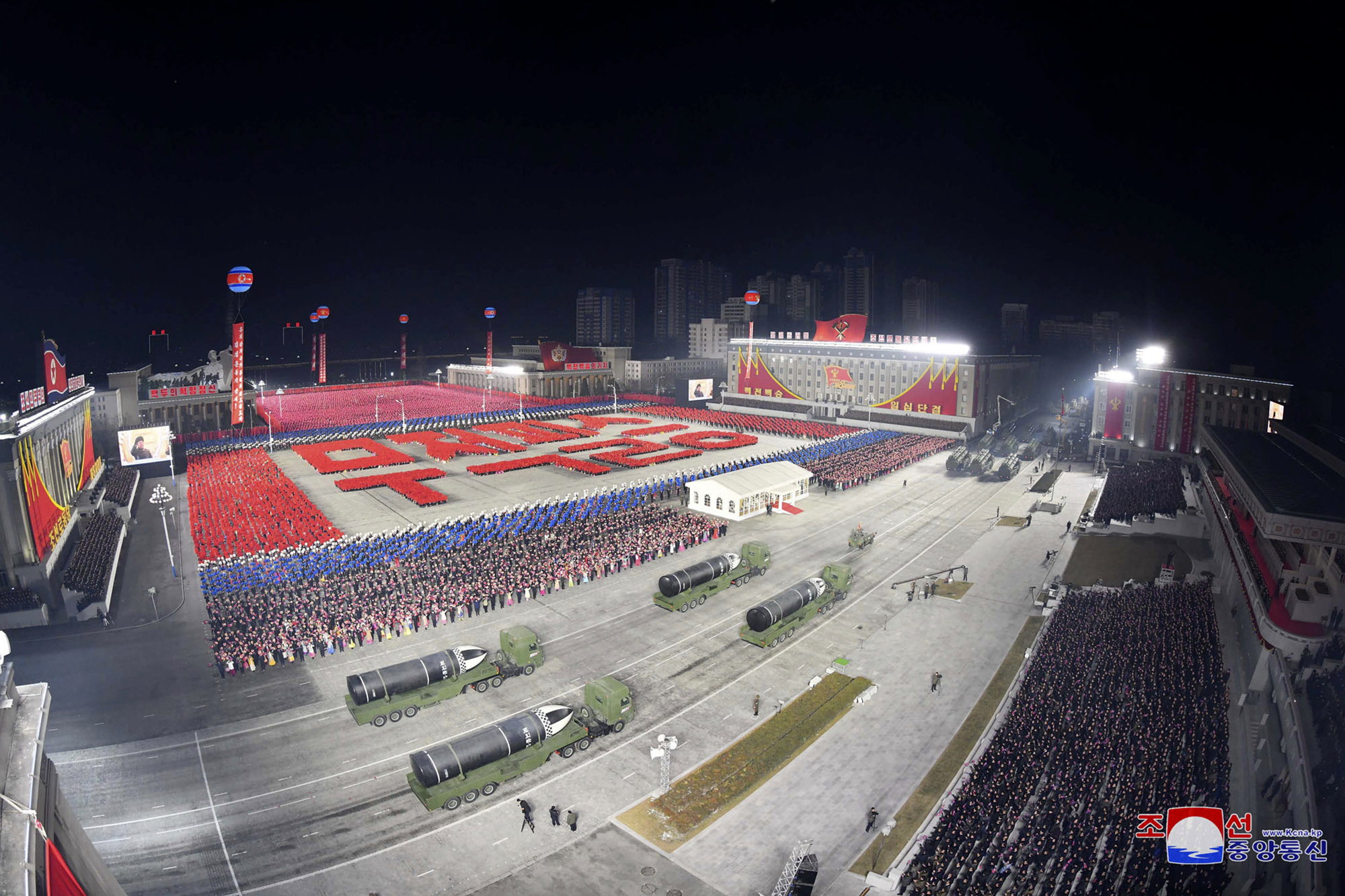 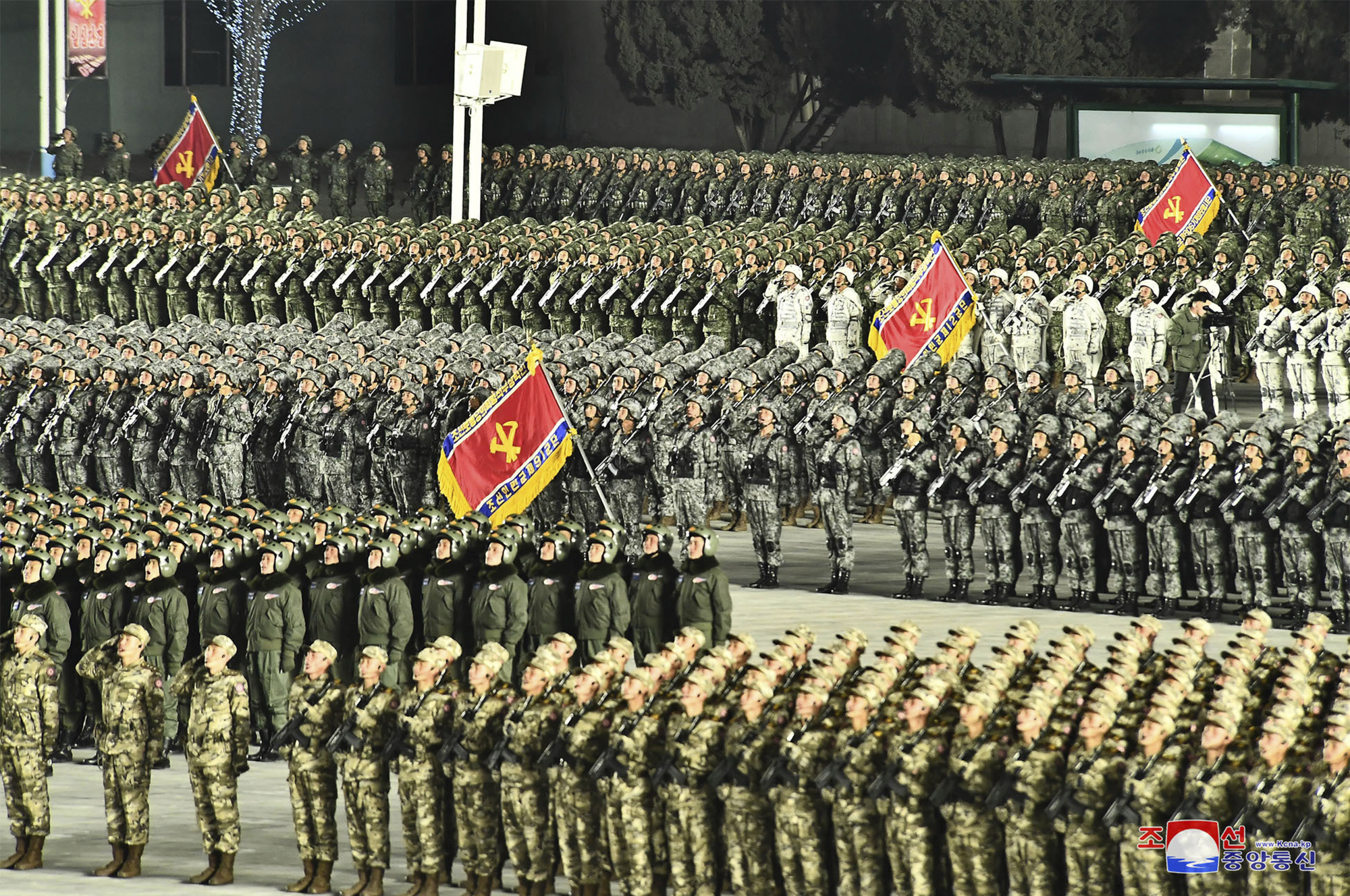 Reports and video from state media suggested that North Korea's leader did not make a speech during the parade. (Korean Central News Agency/Korea News Service via AP)
11 of 13 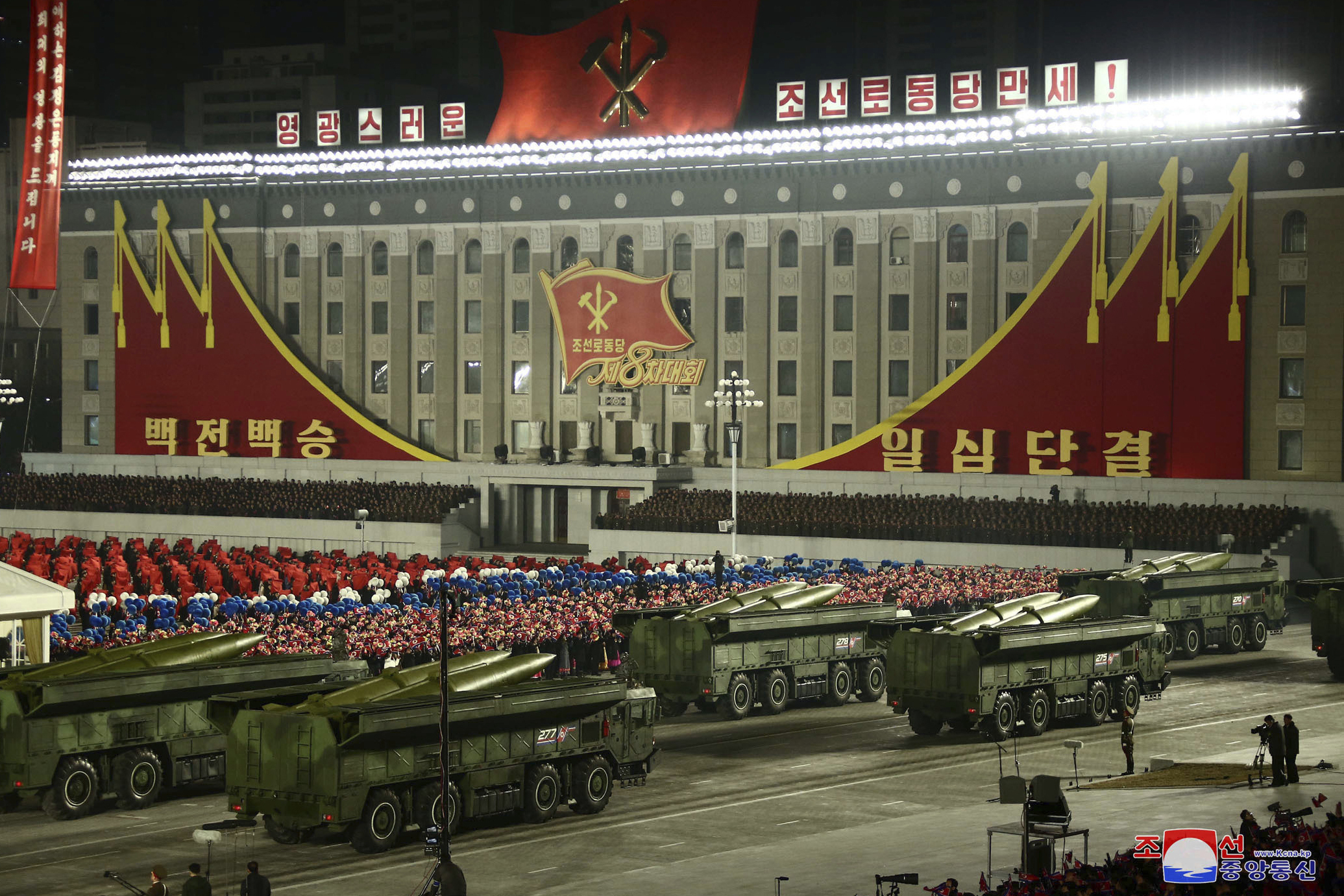 Photos and video released by state media didn’t appear to include weapons that could be definitively identified as intercontinental ballistic missiles. (Korean Central News Agency/Korea News Service via AP)
12 of 13 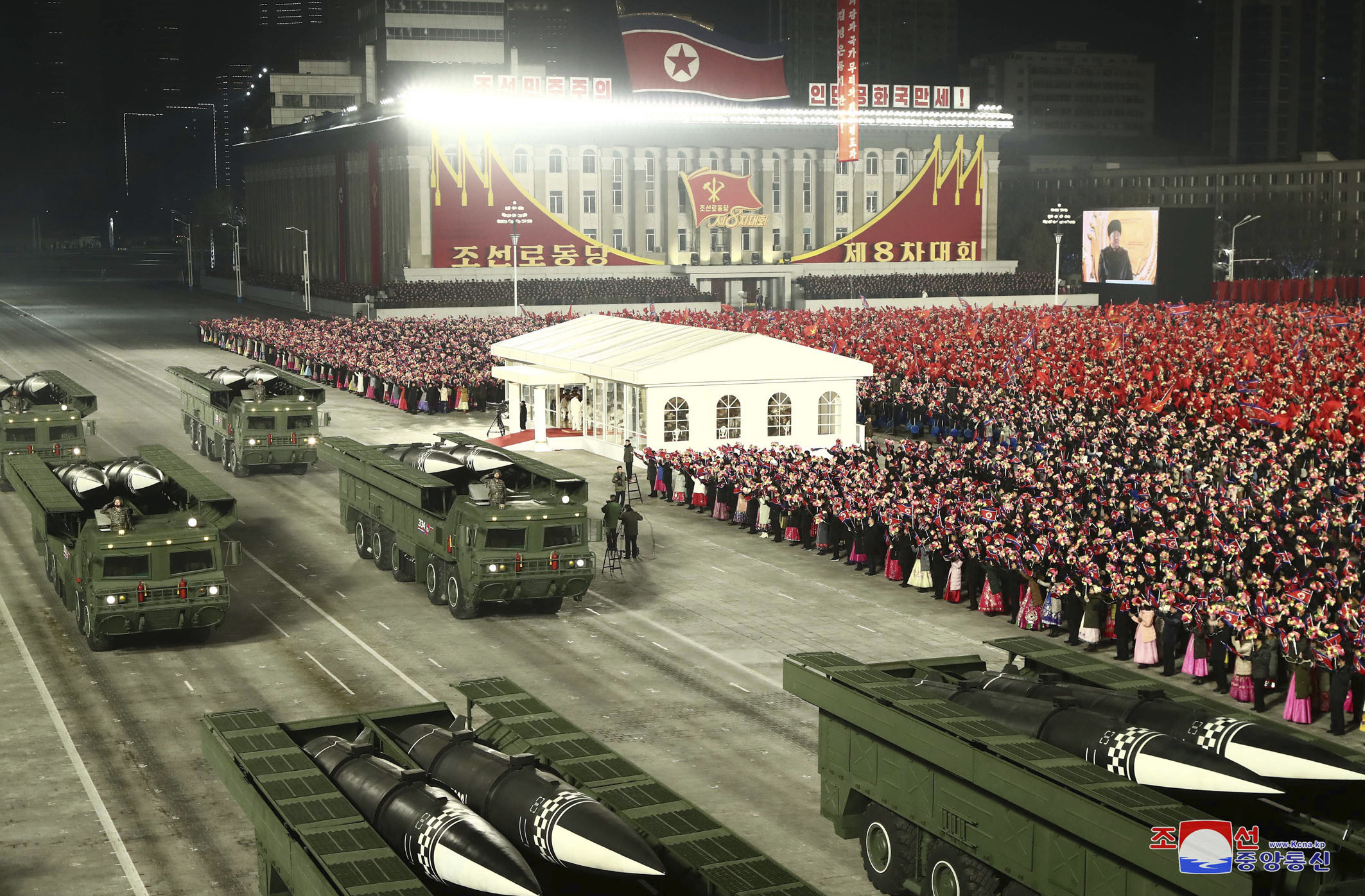 Missiles are seen on trucks during a military parade in Pyongyang, North Korea, on Jan. 14, 2021. (Korean Central News Agency/Korea News Service via AP)
13 of 13 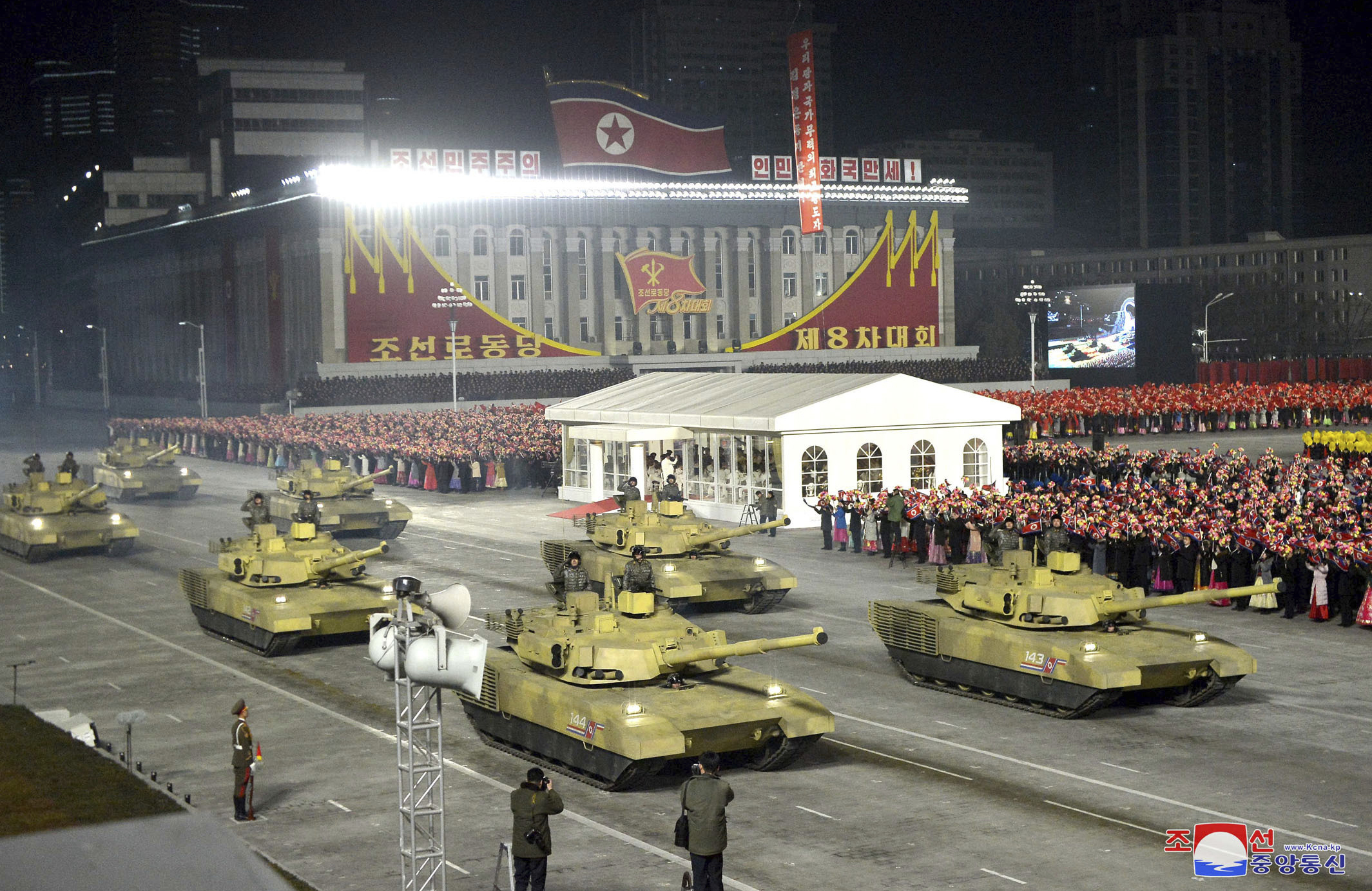 Kim presided over Thursday’s parade, which took place at night under powerful floodlights, the second time the country has done so. State media said he took center stage at the parade celebrating a major ruling party meeting in which he vowed maximum efforts to bolster the nuclear and missile program that threatens Asian rivals and the American homeland to counter what he described as U.S. hostility.

During an eight-day Workers’ Party congress that ended Tuesday, Kim also revealed plans to salvage the nation’s economy, hit by U.S.-led sanctions over his nuclear ambitions, pandemic-related border closures and natural disasters that wiped out crops.

The economic setbacks have left Kim with nothing to show for his ambitious diplomacy with President Donald Trump, which derailed over disagreements about sanctions relief in exchange for North Korean denuclearization steps, and pushed Kim to what is clearly the toughest moment of his nine-year rule.

Kim’s comments are likely intended to pressure the incoming U.S. government of Joe Biden, who has previously called the North Korean leader a “thug” and accused Trump of chasing spectacle rather than meaningful curbs on the North’s nuclear capabilities. Kim has not ruled out talks, but said the fate of bilateral relations depends on whether Washington abandons its hostile policy toward North Korea.

What was on display?

The parade featured the debut of a number weapons systems, primarily a number of what appears to be a new two-stage submarine-launched ballistic missile. Markings painted on the missile at the parade indicate that this new weapon is called the Pugguksong-5 and has a distinctly different warhead section from the Pugguksong-3 tested by North Korea in 2019 and the Pugguksong-4 displayed at the massive October 2020 parade.

Another notable debutant at the parade was a road-mobile, solid-fuel, short-range ballistic missile, or SRBM. The as-yet unnamed system mounted a pair of missiles on a wheeled five-axle transporter-erector-launcher, or TEL, and appeared to be a larger version of the KN-24 SRBM previously unveiled.

The new missile is also longer than the North Korean KN-23 SRBM, whose design is outwardly similar to the Russian Iskander missile. The KN-23 has been tested up to a range of 430 miles, and is also mounted in pairs, albeit on a shorter, four-axle version of the new missile’s TEL.

This North Korean parade was also notable for the missiles systems that did not make an appearance, which include the longer-ranged intermediate-range and intercontinental ballistic missiles that were present at earlier parades.

North Korean state TV on Friday aired edited footage of the parade, showing thousands of civilians and troops roaring and fireworks exploding overhead as Kim stepped out of a building and took his spot at a podium in Kim Il Sung Square, named after his grandfather and the country’s founder.

Reports and video from state media suggested that Kim did not make a speech during the parade.

His defense minister, Kim Jong Gwan, said in a speech that North Korea’s military would “preemptively marshal our greatest might to thoroughly punish hostiles forces” if they threaten the North’s safety.

Military aircraft flew in formation across the dark sky, using what appeared to be flares to form the symbol of the Workers’ Party — a hammer, brush and sickle.

What does the parade represent?

North Korea has been developing submarine-launched ballistic missile systems for years. Acquiring an operational system would alarm its rivals and neighbors because missiles fired from under water are harder to detect in advance.

Still, Kim Dong-yub, an analyst at Seoul’s Institute for Far Eastern Studies and a former military official who participated in inter-Korean military talks, said the North’s presumably new submarine-launched missiles could possibly be engineering mockups that require further development before they are ready to be tested and deployed.

While Kim Jong Un vowed during the congress to develop nuclear-powered submarines capable of firing nuclear-armed ballistic missiles, it would take “considerable time” for North Korea to overcome financial and technological difficulties and produce such systems, the analyst said.

Leif-Eric Easley, a professor at Ewha University in Seoul, said the way North Korea featured the submarine-launched missiles in the parade suggests that a test related to them could be North Korea’s first provocation for the Biden administration.

South Korea’s Joint Chiefs of Staff said in a statement that it is studying the weapons displayed by North Korea but didn’t immediately release a detailed assessment.

The move toward the development of tactical nuclear weapons by North Korea was not surprising, according to Ankit Panda, the Stanton senior fellow with the Nuclear Policy Program at the Carnegie Endowment for International Peace, although he cautioned the country might resume nuclear testing.

Any such move would almost certainly attract international condemnation and could plunge the Korean Peninsula into a new crisis. North Korea previously offered a moratorium on ICBMs and nuclear testing in 2018. It has since said it is no longer bound by this unilateral decision but has yet to resume tests.

Nuclear-powered submarines were just one of many advanced military assets on Kim’s wish list during the congress, which also included longer-range ICBMs that could potentially target the U.S. mainland more reliably, new tactical nuclear weapons and warheads, spy satellites and hypersonic weapons.

It’s unclear whether North Korea is fully capable of developing such systems. While the country is believed to have accumulated at least dozens of nuclear weapons, outside estimates of the exact status of its nuclear and missile program vary widely.

Benefits for hypertension a top priority in vets committee

Sen. Jon Tester, the new chairman of the Senate Veterans' Affairs Committee, talks about one his lead priorities for legislation in the coming session.