KIRTLAND AFB, New Mexico – A vehicle roars out of the back of an MC-130 at high speed, while nearby a man moves around in a virtual-reality headset. Above, winches are lowered and raised on a platform adorned with a Christmas tree. And at the center of it sits a former taco truck, now equipped with a really, really big gun.

It’s not a fever dream of an Air Force maintainer, although it’s not far off. It’s the reality of Kirtland Air Force Base's "Monster Garage," a key and innovative part of training airmen from the US Air Force Special Operation Command (AFSOC).

During a visit to Kirtland in September, reporters accompanying Secretary of Defense Ash Carter got to tour the Garage in person, getting a hands-on look at the designs that Col. Shelley Rodriguez, Commander of the 58th Operations Group, uses to help train over 2,000 airmen at Kirtland each year.

Find all our coverage of the 2016 I/ITSEC conference here!

Weeks after the visit, Rodriguez and Lt. Col. Joe Augustine, Commander of the 58th Training Squadron, told Defense News that increasing the use of simulation for training is a key part of how they plan to train airmen going forward.

As simulation and training technologies have improved, the Pentagon has been explicit in a desire to move more training from live flights to ground-based options. The benefits are obvious: reduced risk to pilots while cutting down on the costs of flying aircraft. As a bonus, trainers can program in a number of situations that would be expensive or impossible to create with a live aircraft.

The Monster Garage takes it a step farther, with a team of fabrication experts who have come up with a number of low-cost, ground-based training solutions. Picture the custom garage guys from shows such as "Pimp My Ride," complete with black polo shirts adorned with the Monster Garage logo, except instead of adding pool tables to cars they are playing with discarded airplanes that otherwise would end up in the scrap heap.

Rodriguez estimates the Garage saves roughly $57 million each year by providing training alternatives to the tried-and-true method of getting into an aircraft, taking it up, and training live.

The 58th Operations Group trains special operations, combat search and rescue and airlift aircrews in the UH-1H/N, HH-60G, MH-53J/M, HC-130N/P, MC-130P, MC-130H and CV-22 aircraft, and all those platforms are well represented in the Monster Garage.

So what makes up the core of the Monster Garage? Here are just a few of the designs on the floor of the facility:

Load Master Fuselage Trainer- The trainer, built by Lockheed Martin, helps train HC/MC-130 operators to quickly load and unload their aircraft. Essentially, the trainer is a mocked up back of a C-130 with a ramp attached, where loadmasters can simulate having to make a quick unload under enemy fire. During the visit to Kirtland, reporters watched the back ramp drop and a ground vehicle come roaring out the back at full speed.

It runs 15-18 hours a day, five days a week, with roughly 30-40 vehicles coming out the back every day. And that could expand, with Rodriguez saying they were considering opening the trainer up 24 hours a day in order to meet demand.

MC130 Fuselage Trainer – The Monster Garage’s fabrication team showed its value with this design, a retired MC-130E Combat Talon airframe that was on its way to be retired. The fabricators intercepted it and set to work redesigning it into a MC-130H Combat Talon II trainer. The work included stripping off the wings, clipping the propellers, and removing and then reinstalling dozens of feet of wiring inside the plane.

According to an Air Force press release from 2014, a military contractor wanted $15 million to make an equivalent piece of technology. Instead, the Monster Garage people managed to create one for roughly $250,000. Airmen now train about 10-15 hours a day on the system, primarily with training for tie down on the landing gear or loading and offloading vehicles. 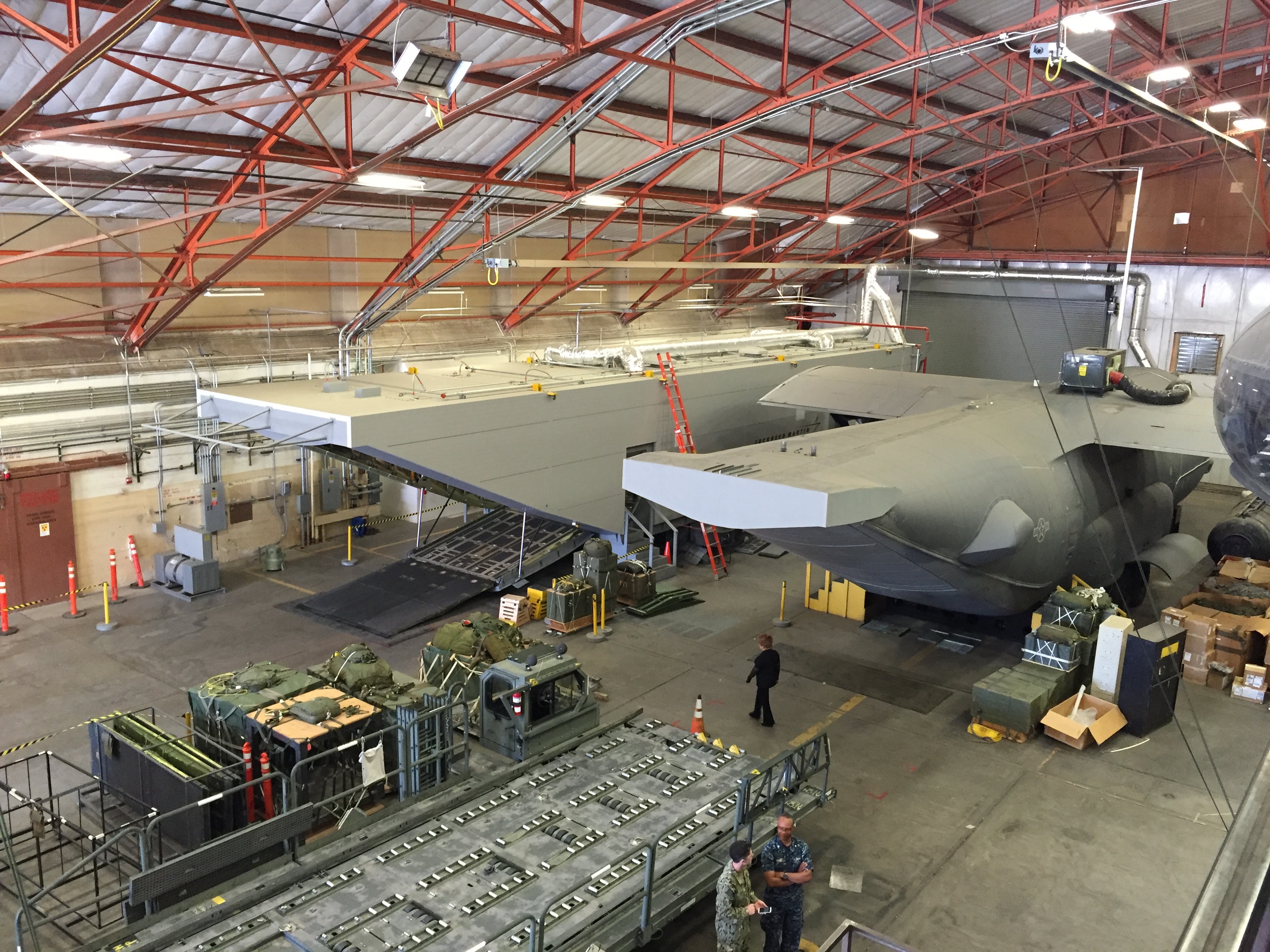 On the left, the Load Master Fuselage Trainer; on the right, the MC-130 Fuselage Trainer.
Photo Credit: Aaron Mehta/Staff
The War Wagon – Technically the "Live Fire Trainer," this converted taco truck goes by the War Wagon nickname around the Garage. The design is almost comically simple – either a GAU2 minigun or M240B machine gun sticks out of the window of a small trailer – but it has netted huge results, according to Rodriguez.

The setup lets airmen train on the weapons used for the HH-60G and UH-1n without the cost of having to fly one of the helicopters down to a weapons range, spend a few hours flying around, and then returning. Instead, airmen can just haul the wagon down to a local range on the base, set up, and get their practice in without ever having to take a Huey into the air.

The War Wagon "gives us flexibility we have not had before," Rodriguez said. "The thing has been phenomenal."

Augustine notes that the universal mount used on the War Wagon could also hold the .50 caliber GAU-18 – but only if they decided to increase the structure of the Wagon, which wouldn’t be able to survive for long with the heavier weapon.

UH-1N and HH-60 Static Trainers – Looming over the Monster Garage is a tall tower, equipped on either side with old UH-1N and HH-60 platforms. These are used to train airmen who will be participating in rescue operations how to raise and lower litters loaded up with roughly 180-pound dummies. While they are doing that, trainers can simulate weather conditions to keep the training airmen on their toes.

Behind one of the aircraft sits a permanently placed Christmas tree, something Augustine says is actually a vital training tool.

"The students need to be able to manage that hoist in the presence of tall trees, because historically they struggle with that particular nuance of the training program," he explained. So the tree serves as a stand-in for a whole forest that could be too close to the back of a helicopter.

At the same time, pilots can’t get too locked in on that tree, so the Garage set up a small commercial webcam inside the trainer cockpit, letting instructors see if their trainees are too focused on watching either the tree of the winch and ignoring the other. 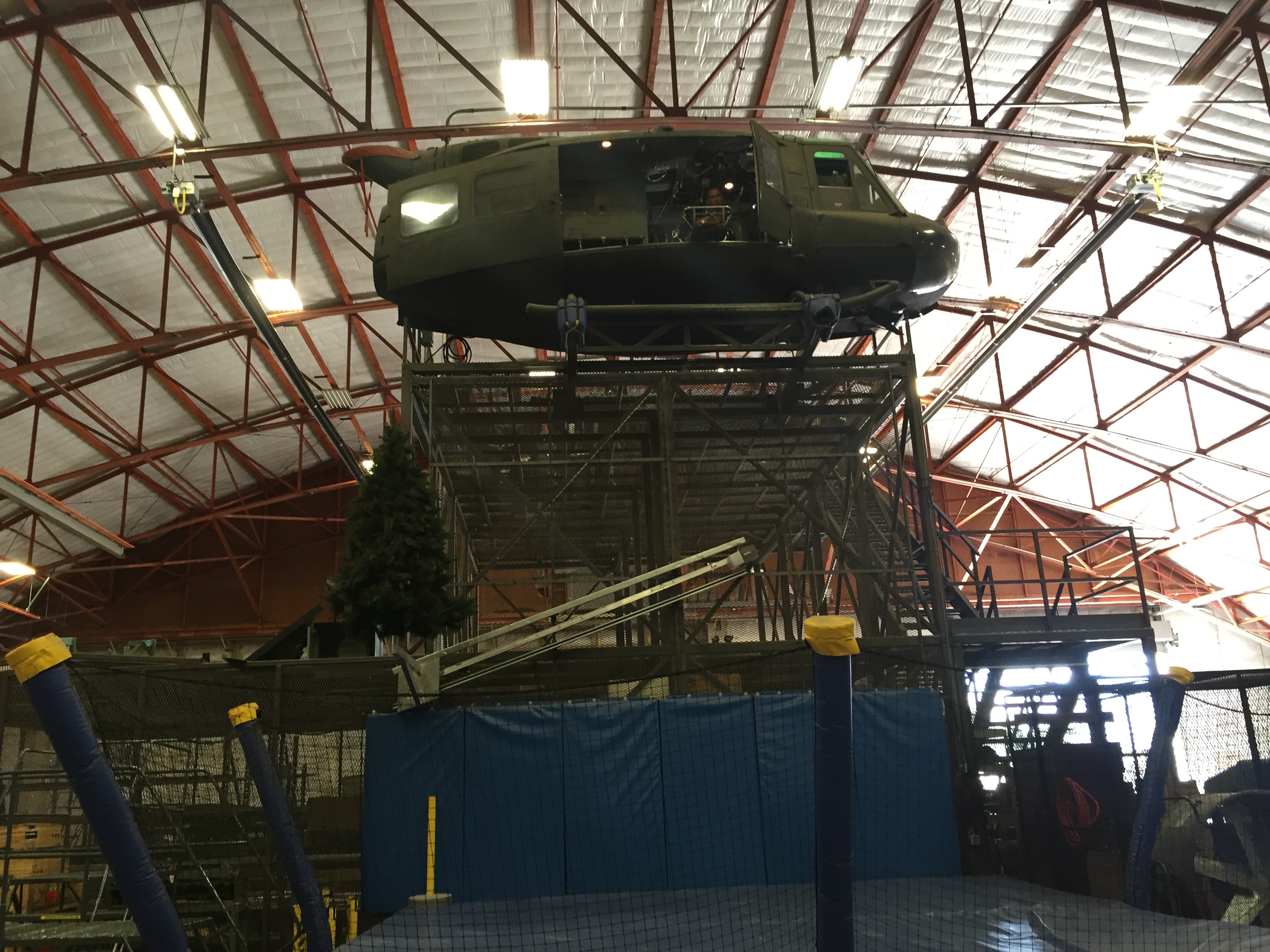 The Monster Garage set up a Christmas tree under its Huey trainer, in order to remind pilots to keep an eye on their tail.
Photo Credit: Aaron Mehta/Staff
CV-22 Trainer and Virtual Reality— Primarily used for maintainers, who can do detailed training down to borescopes of the engine, the CV-22 trainer also lets special mission personnel learn the preflight systems. The Monster Garage team has begun playing with simulated environments to help pilots practice what they would need to do to get up and running under a variety of situations.

What’s more exciting about the CV-22 trainer is what could come in the realm of virtual reality. During the reporter visit in September, a virtual-reality trainer was set up with goggles and two controllers. The maintainers put the goggles on and can move around a shockingly accurate CV-22 simulation, opening panels to explore wiring.

Right now, the use of virtual reality is more a "proof of concept" than a working system, said Augustine. But both he and Rodriguez expressed hope that the service would find ways to fund virtual-reality systems in the coming years.

Rodriguez was particularly excited at the potential in such systems, especially as commercial companies such as Samsung are pushing mass-market virtual reality sets for less than $100 this Christmas season. She sees a future where every student is handed a VR system on their first day of training and it becomes a key part of their homework.

"When a student wants to study and can’t figure out what he saw on an aircraft, instead of having to walk down to the flight line, he can just pull the system up in his room and go back through an aircraft preflight while in his dorm room," she said. "That’s kind of phenomenal. If you can get something like a tablet device where you could put some of the training on there and combine that with virtual reality, the possibilities are endless."

And if it works for training, Rodriguez notes, it could also work for pre-mission briefings. Imagine a scenario where US forces are going to launch a mission against a target. Hours before the flight, an unmanned system could go and scout the area, beaming those pictures back to base where operators can strap on VR headsets and run through the mission, with near real-time data, before loading up.

"It’s almost mind blowing how much this could impact operations," she said.
About Aaron Mehta

Aaron Mehta was deputy editor and senior Pentagon correspondent for Defense News, covering policy, strategy and acquisition at the highest levels of the Defense Department and its international partners.

Marines say live training is the gold standard for infantry — but they're increasingly seeing where that needs to be supplemented with synthetic training opportunities.

Lockheed Martin spent its own money developing this LITE trainer over the last 18 months after hearing signals from F-35 customers that they needed more training capacity for less cost.

With T-7 on the way, why is ACC eyeing a new trainer?

While the Air Force has a new trainer designed to teach new pilots how to fly in 5th generation fighter aircraft, the T-7A Red Hawk, Air Combat Command has started exploring the possibility of another Advanced Tactical Trainer.

The Navy wants to create better pilots for less cost, relying on simulators for more basic-level training and preserving the expensive live-flight hours for high-end tactics.

Guardsmen who refuse vaccination will not be able to participate in any drills or federal training, which could jeopardize their ability to stay in the military.

Retired Generals push back on plan to redesign how Marines fight

The Army's plan to increase its power | MilTech