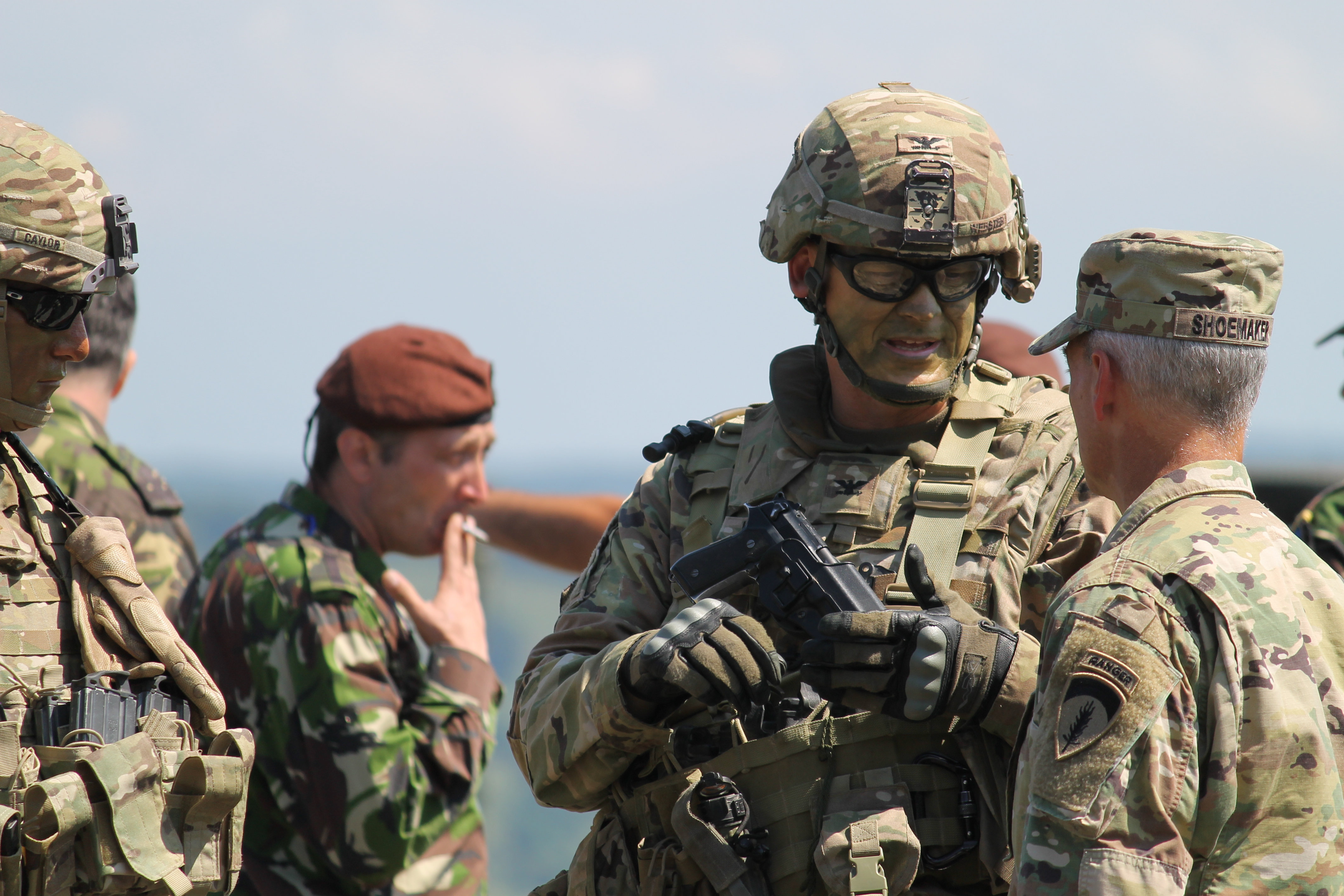 Col. Kelly Webster, the commander of the 1st Cavalry Division Artillery/DIVARTY out of Fort Hood, Texas, and Col. Jeff Shoemaker, director of U.S. Army Europe’s exercise program, discuss plans at the range where Saber Guardian’s Combined-Arms Live-Fire Exercise, or CALFEX, would take place on July 15. Webster’s division was in charge of mission command for the exercise with the goal of suppressing enemy air-defense and artillery assets to provide room for friendly maneuver forces to advance. His Tactical Operating Command was nestled along the treeline at the top of the range located on a hill, but was moved every few days to teach mobility — an important tactic expected to be employed when operating against near-peer adversaries. (Jen Judson/Staff)
2 of 22 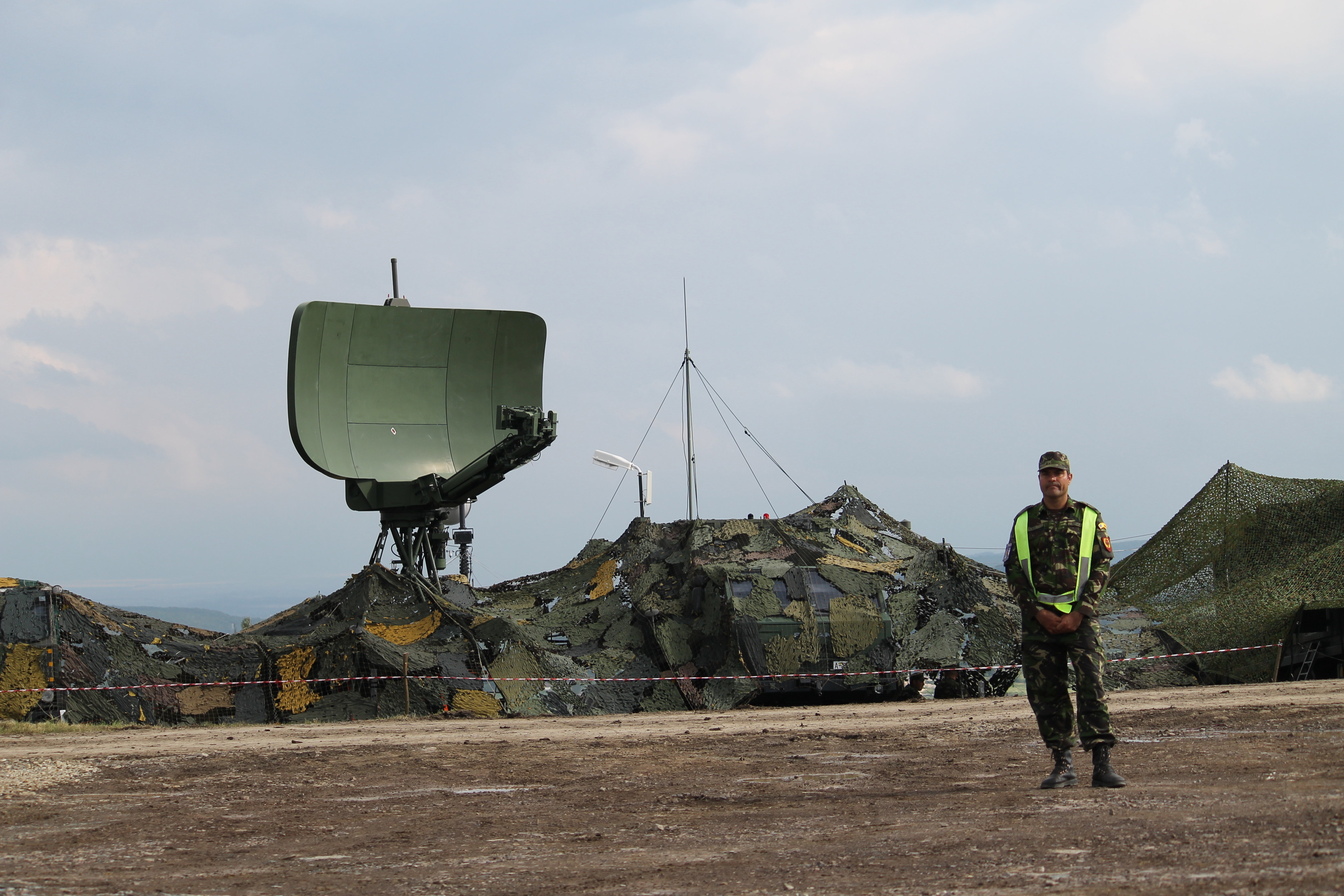 A Romanian radar scans the area searching for the enemy’s position during CALFEX. It was able to detect the enemy during the complex exercise to include identifying enemy main armored vehicles headed toward defensive lines. (Jen Judson/Staff)
3 of 22 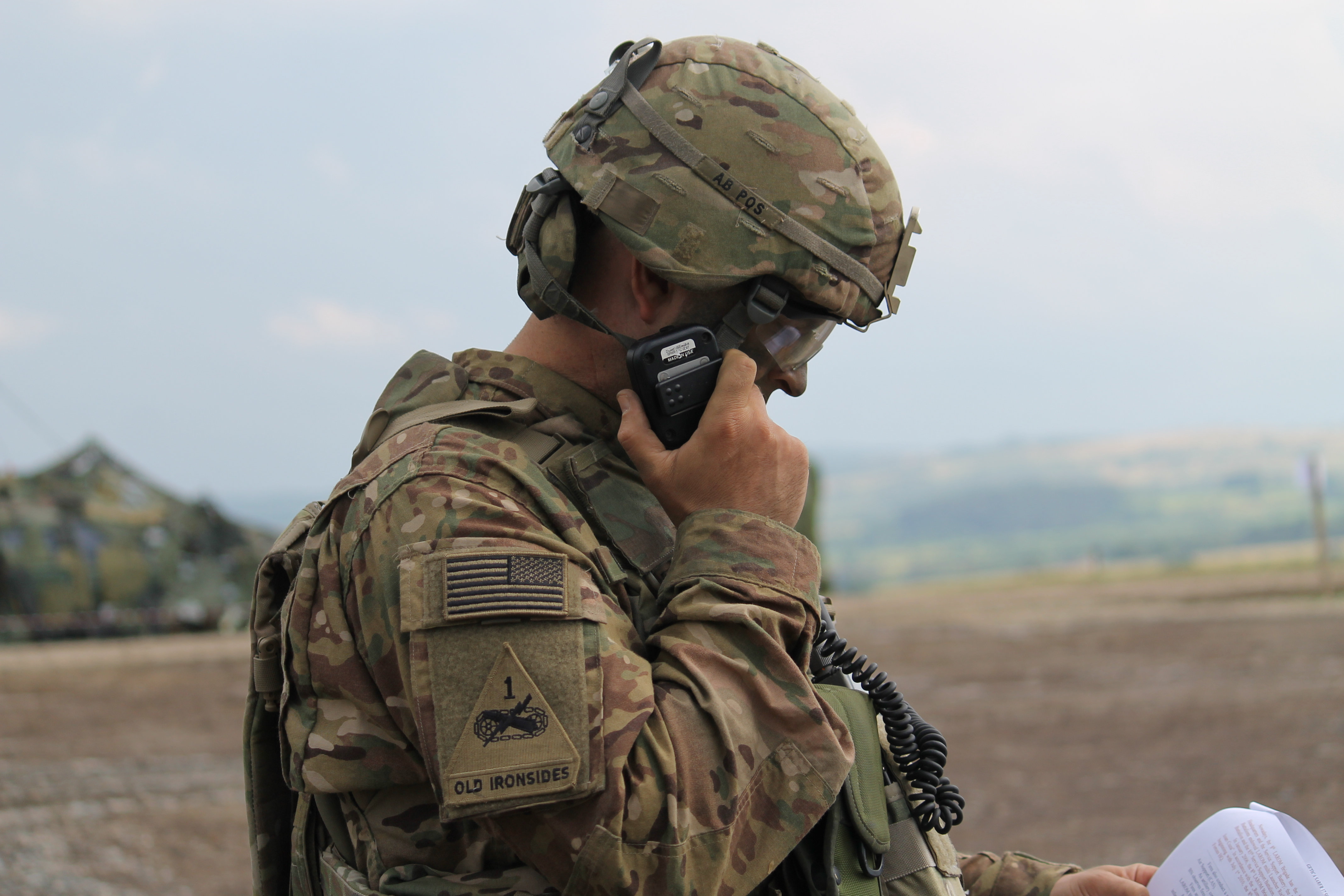 A U.S. Army soldier works behind the scenes at a rehearsal for the main event to communicate the order of the exercise to units involved. The intricate exercise includes a task force consisting of Romanian, Croatian, Armenian, Montenegrin, Ukrainian and U.S. mechanized infantry. It also includes Romanian and U.S. aviation, field artillery and air defense, as well as Romanian fighter jets. (Jen Judson/Staff)
4 of 22 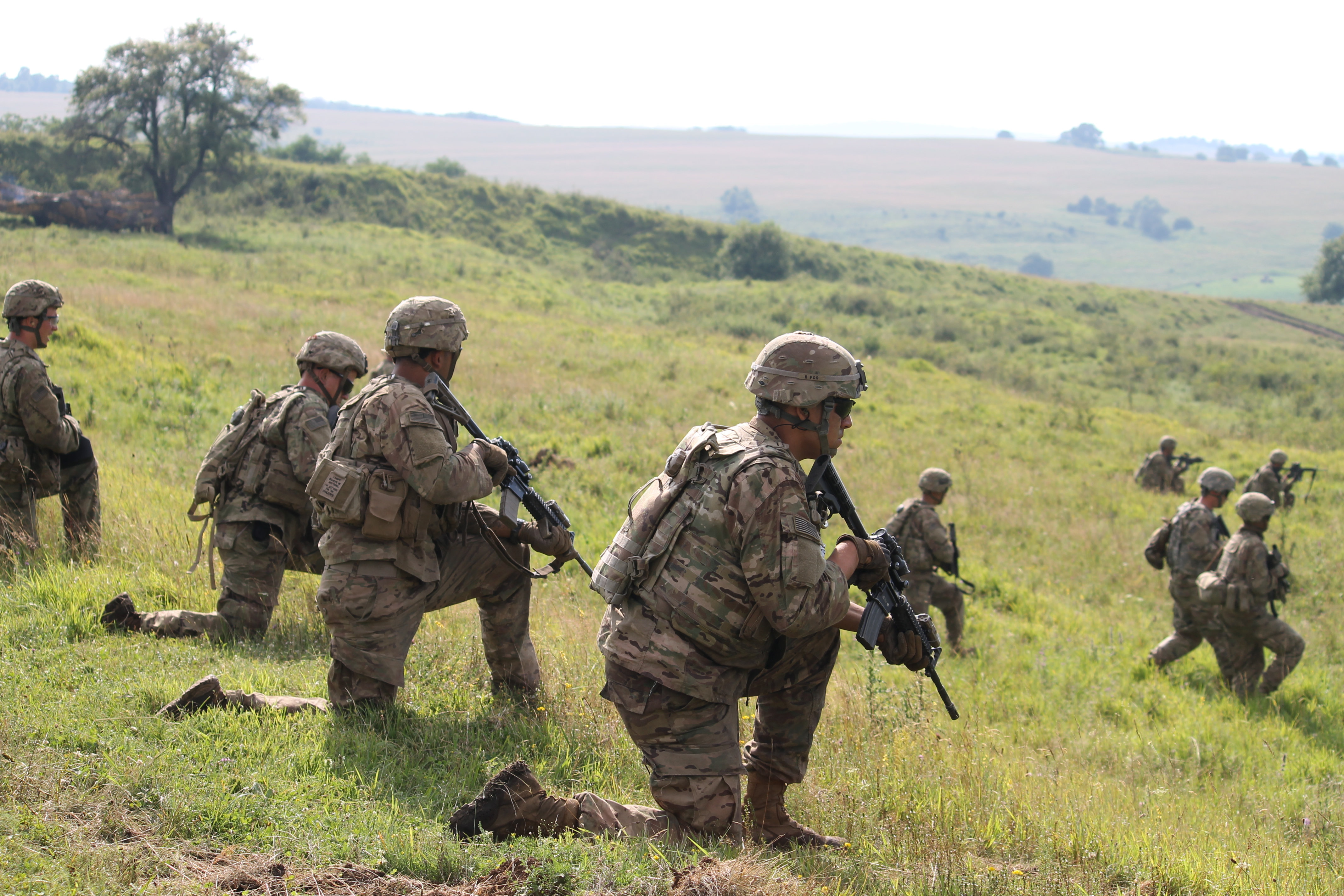 Friendly infantry consisting of U.S. and Croatian companies with a Montenegrin platoon slip into position on the battlefield, establishing strong points midway down the hill across from the enemy positioned up the opposite hill. (Jen Judson/Staff)
5 of 22 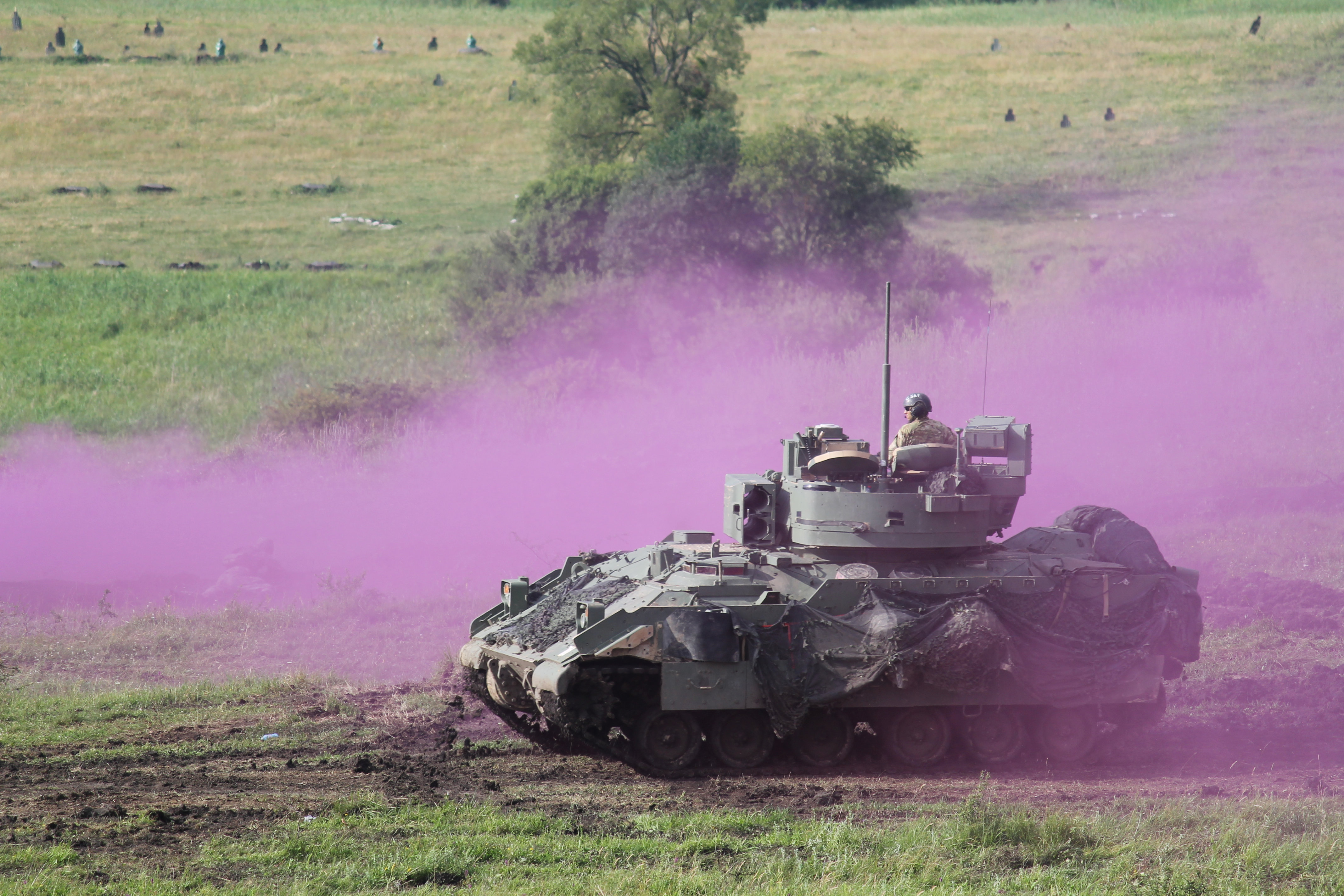 A Bradley Fighting Vehicle moves into fighting position amid the purple haze of a smoke obscurant meant to conceal friendly infantry moving toward battle positions. (Jen Judson/Staff)
6 of 22 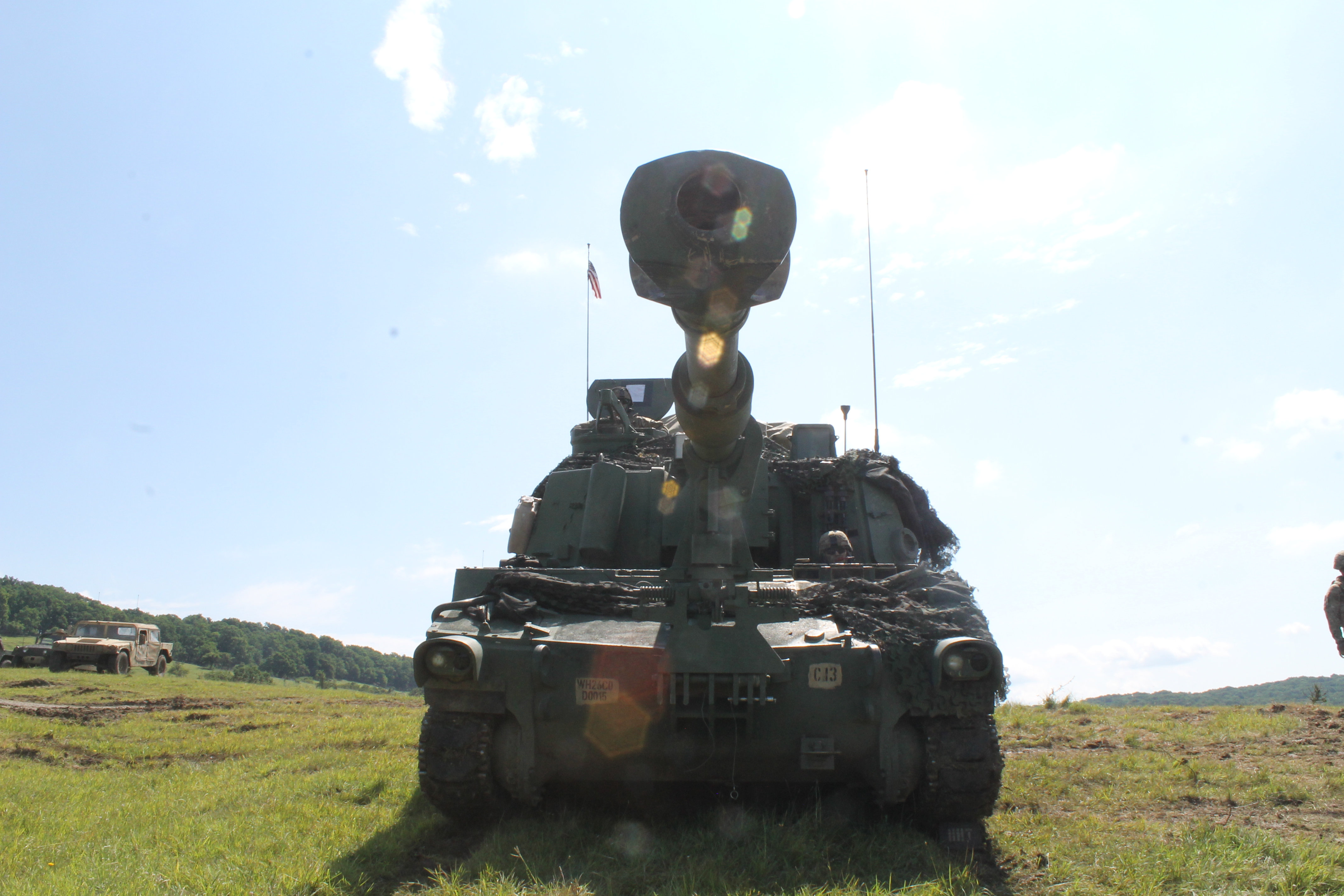 A Paladin howitzer sits atop a hillside waiting for the Super Bowl of live-fire exercises. The Paladin platoons eagerly awaited the big event for a chance to unleash major firepower. A total of 18 Paladins lined the hills of the exercise, firing from the location. The Army’s Paladins were joined by Romanian 125mm guns. Because the Paladins are more mobile, they required less camouflage than the 125mm guns that are stationary. Paladin operators said it was a great opportunity to work with the Romanians and learn how to operate in difficult, hilly, forested and often muddy terrain with large vehicles. (Jen Judson/Staff)
7 of 22 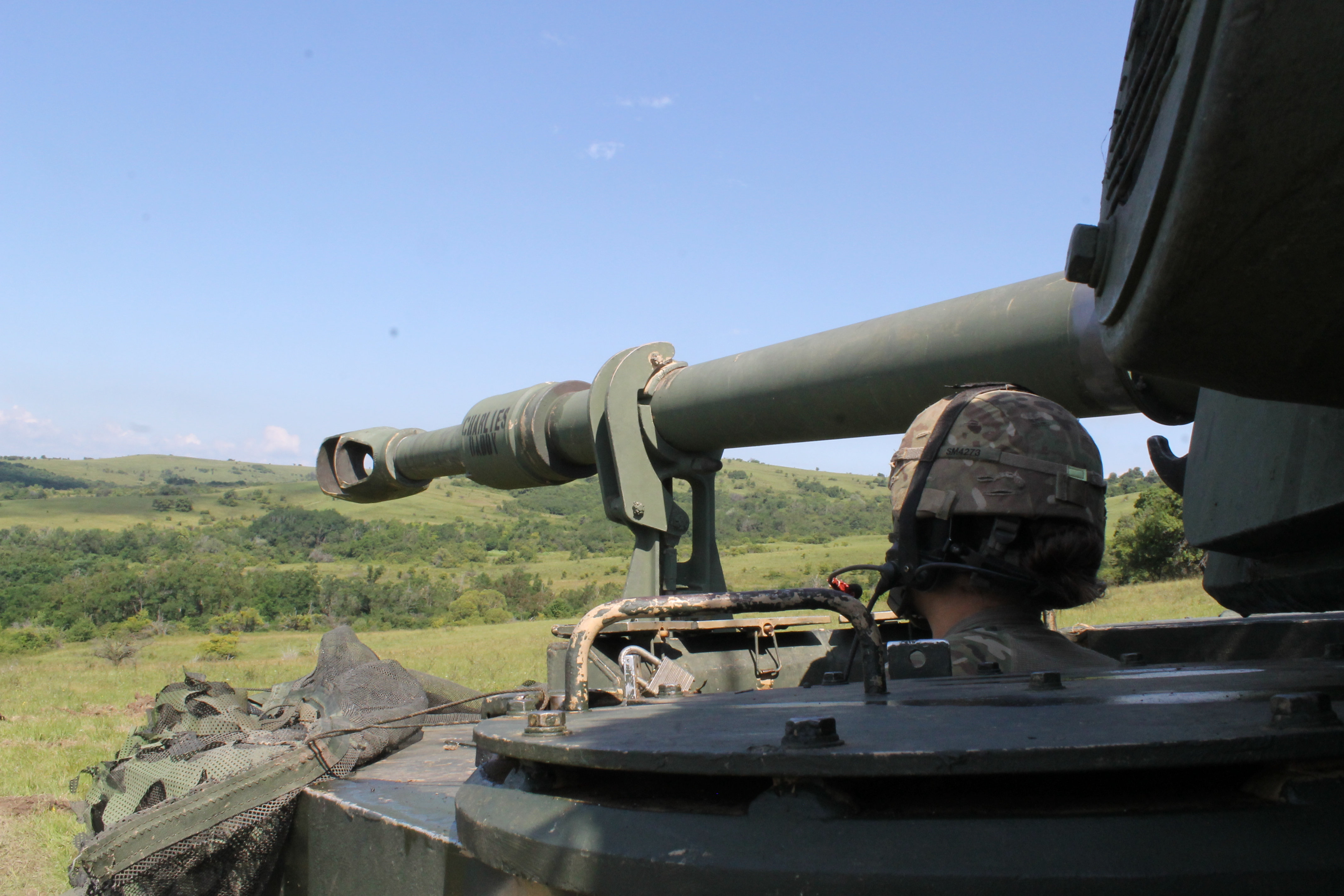 The driver of a Paladin looks out over the hillside where the howitzers took position for the exercise. The Paladin’s range was demonstrated during the live-fire event in an effort to suppress enemy assets to allow freedom of movement of infantry soldiers, Bradleys and M1 Abrams tanks to move in and assault the enemy. The High Mobility Artillery Rocket System and the Multiple Launch Rocket System joined in the salvo of fire power from distant hillsides overlooking the battle space. (Jen Judson/Staff)
8 of 22 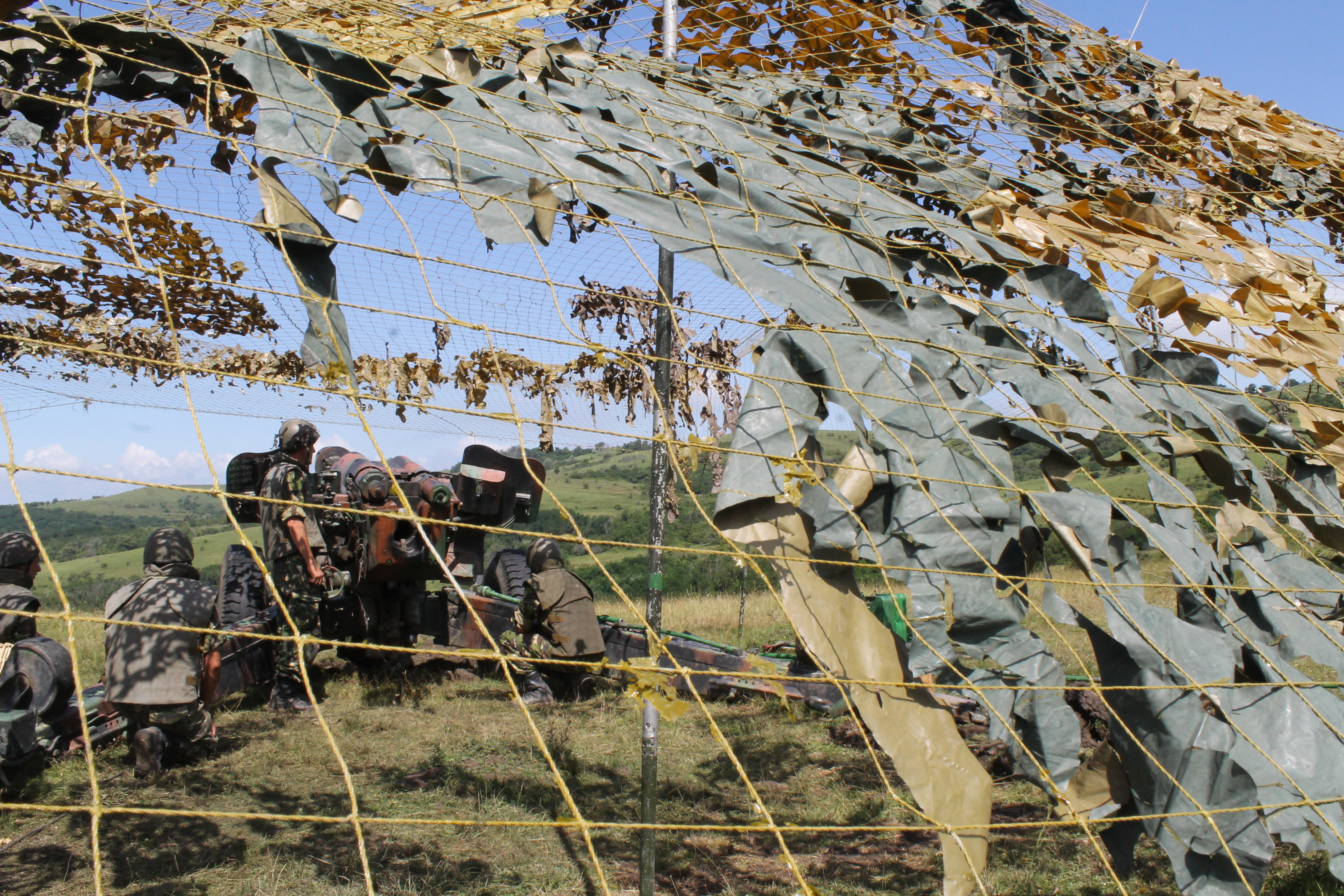 Romanian 125mm guns joined the Paladins on the hill underneath a shroud of extra camouflage, and while the U.S. and Romanian systems worked independently, the units from both countries learned a great deal from each other after spending several days living on a hillside together. (Jen Judson/Staff)
9 of 22 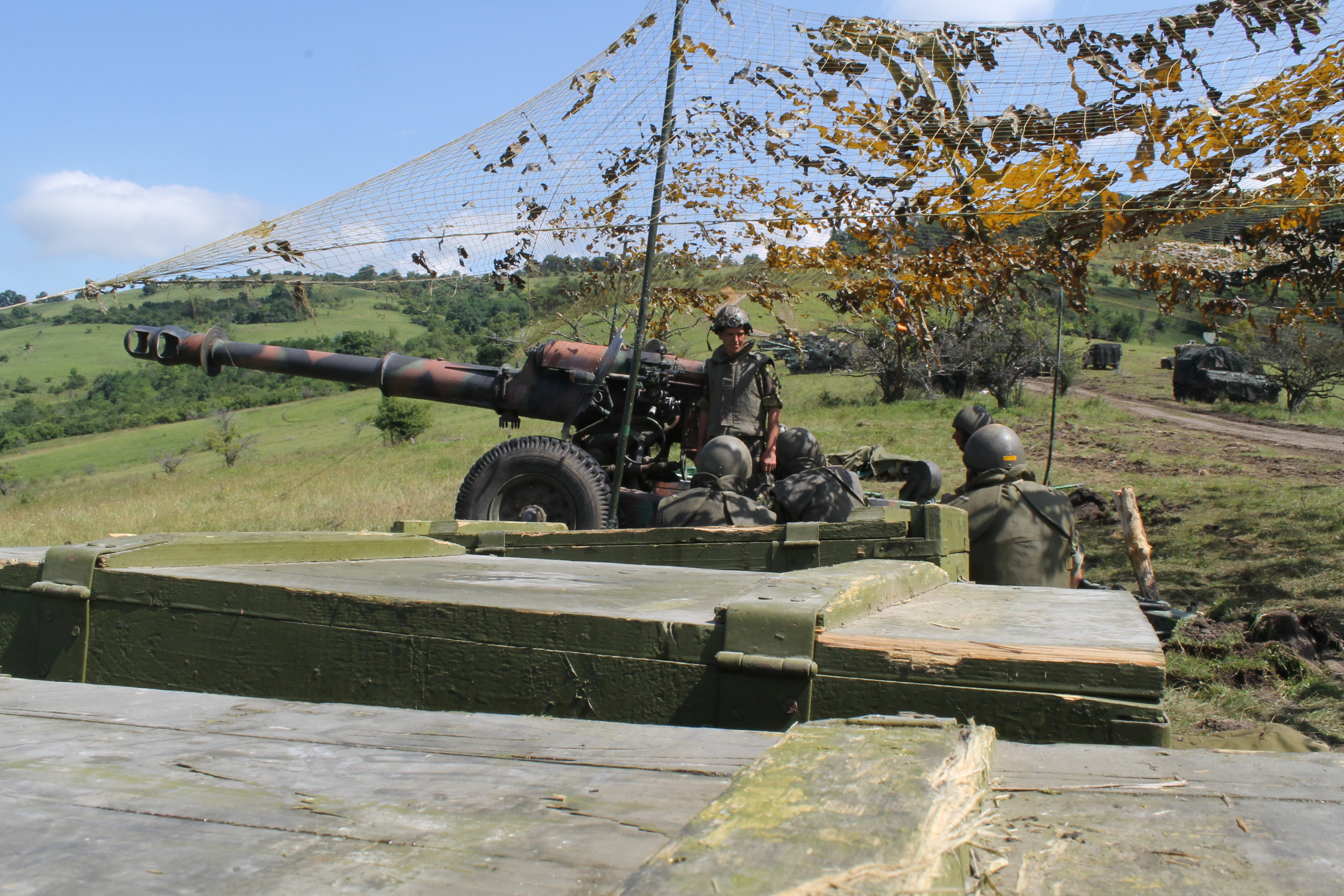 A Romanian unit prepares for CALFEX where it would fire its 125mm gun. U.S. Army Capt. Brett Tinder, a Paladin battery commander, said the gun was an “awesome” weapon and learned a lot from the units employing the towed system and more importantly how to fire such weapons in a wooded, hilly environment as opposed to how Paladin has been employed for the last 15 years of counterinsurgency operations. Lt. Col. Daniel Condruz, the Romanian 285th Field Artillery Battalion commander, said he was learning how the brigade’s tactical operating command fire-support element coordinated operations among the assets. (Jen Judson/Staff)
10 of 22 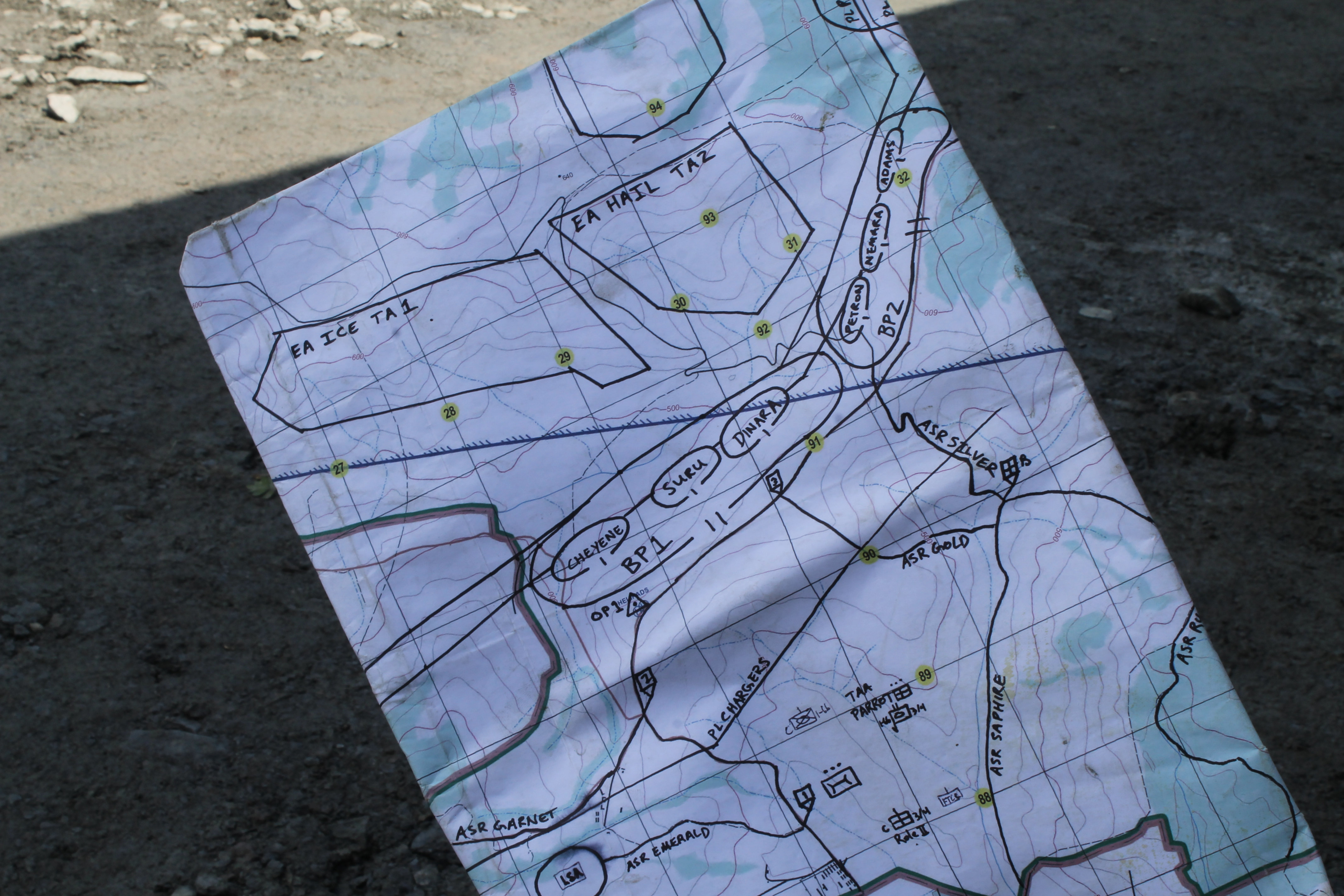 A map of enemy and friendly positions planned for the exercise on the terrain at the Joint National Training Center in Cincu, Romania. The exercise was based on a fictional scenario where European countries are attacked by the enemy with the intention to gain control over economic activities in the Black Sea region. (Jen Judson/Staff)
11 of 22 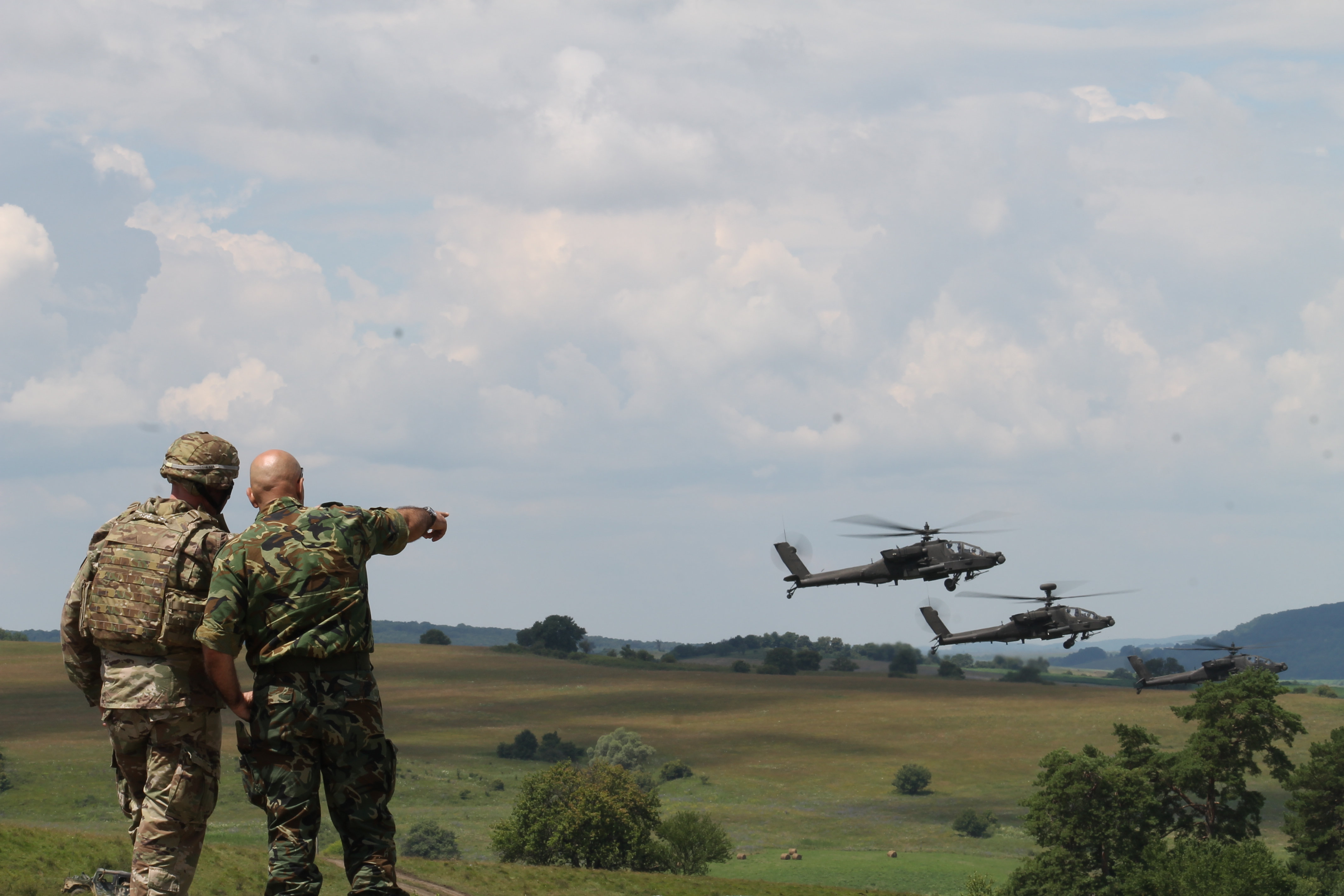 A Romanian soldier and a U.S. soldier observe a rehearsal of the exercise a few days prior to the big event. AH-64 Delta-model attack helicopters slipped into view along a ridge of trees off the side of the range. During the exercise they provided fire support to push back and suppress the enemy. (Jen Judson/Staff)
12 of 22 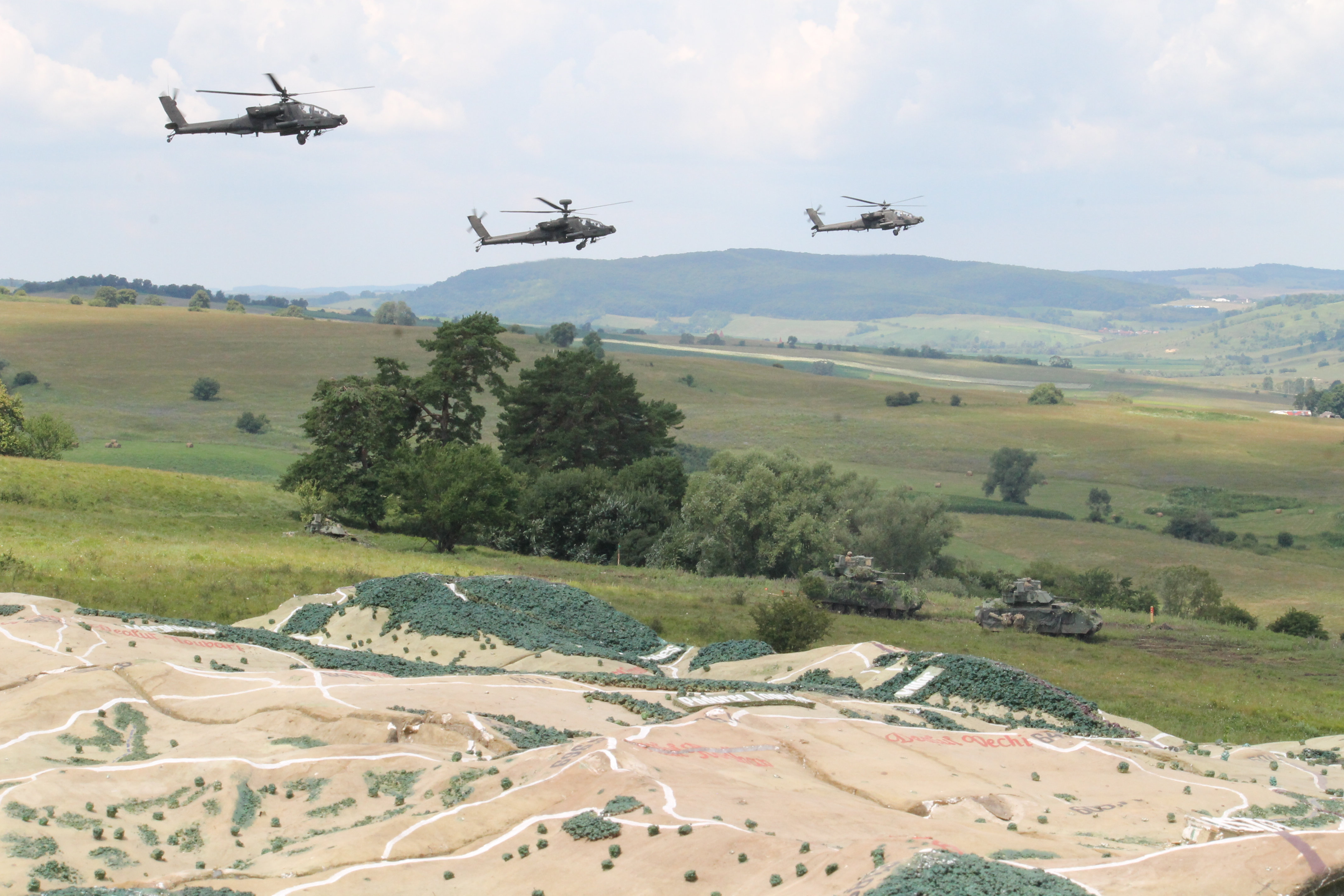 U.S. Apaches fly over the range and a 3-D rendering of the battlefield terrain depicting planned operations. (Jen Judson/Staff)
13 of 22 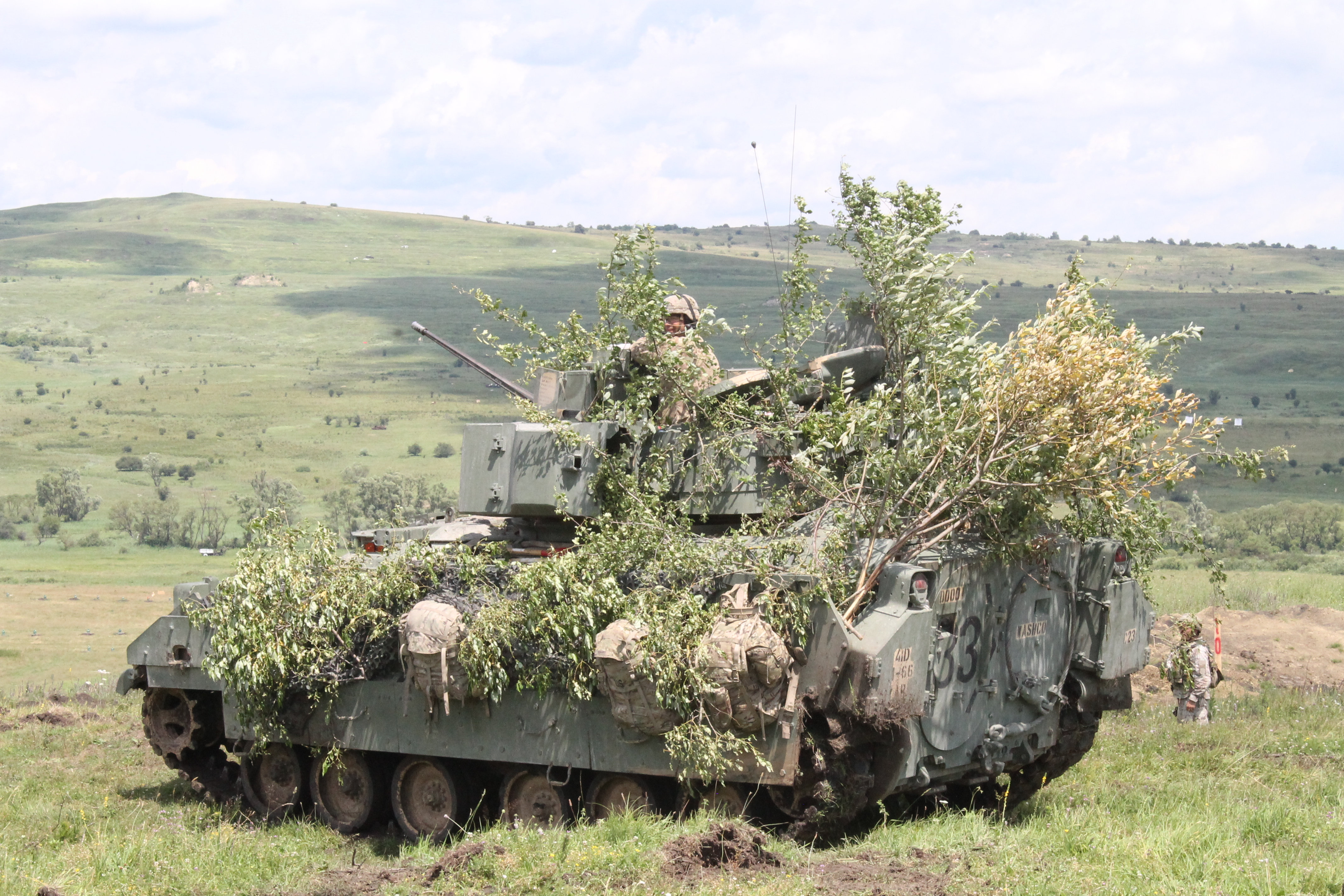 A Bradley Fighting Vehicle displays camouflage using local fauna in order to blend into the surroundings. U.S. Army Europe head Lt. Gen. Ben Hodges, along with mandating soldiers involved in the exercise, wear tactical uniforms, face camouflage, and come prepared and ready to fight as if they would in a real-world operation. Vehicles had to step up the camouflage game, too. The effort shows it’s not just about changing the paint from sand color to forest green. (Jen Judson/Staff)
14 of 22 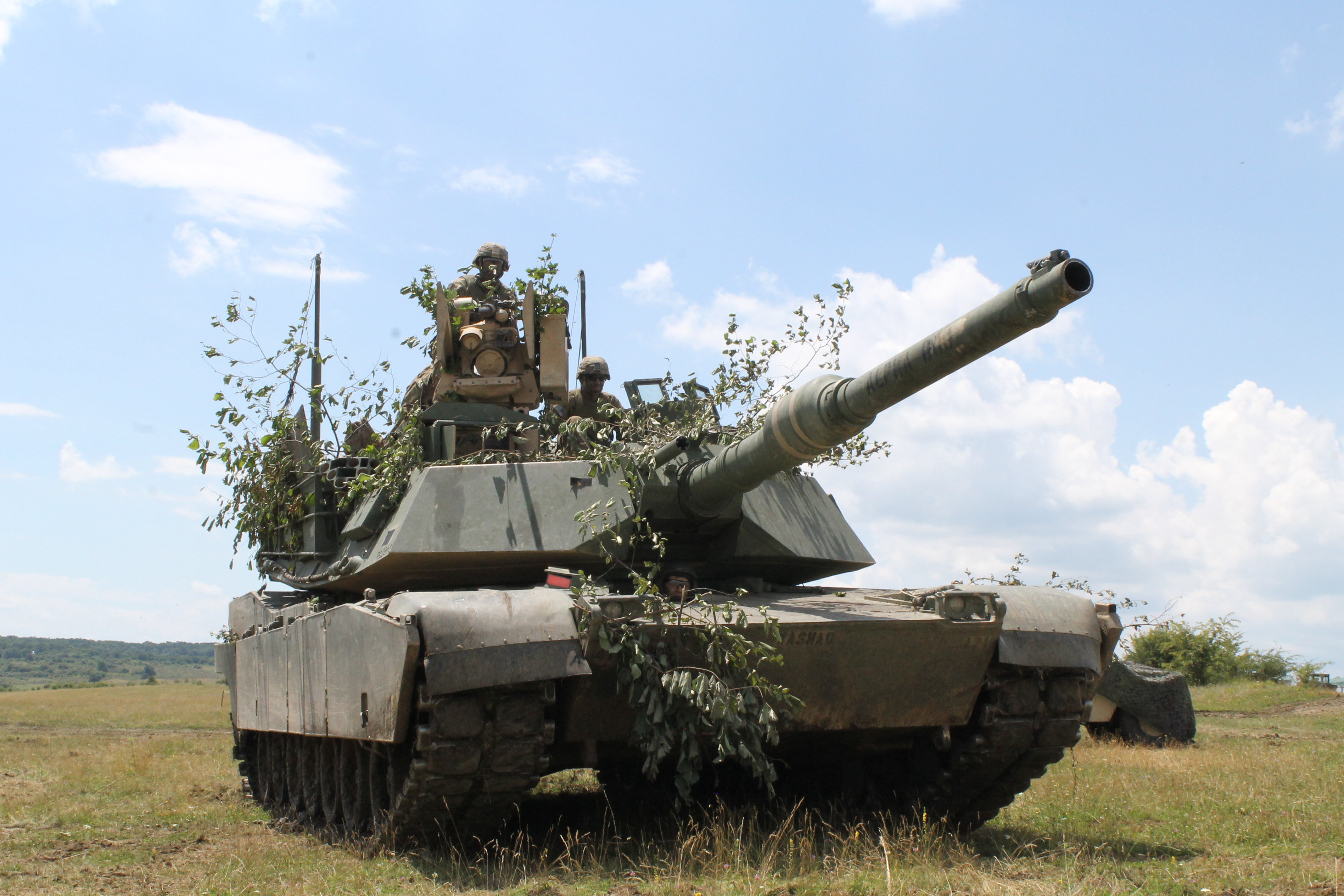 An M1 Abrams tank led by 1st Lt. Marcus Craig, platoon leader of the 2nd Platoon Alpha Company of the 116th Cavalry Brigade, rehearsed participation in CALFEX a few days prior to the main event. The tanks, in the exercise, are called in as enemy reserve forces attempt to breach defensive lines. (Jen Judson/Staff)
15 of 22 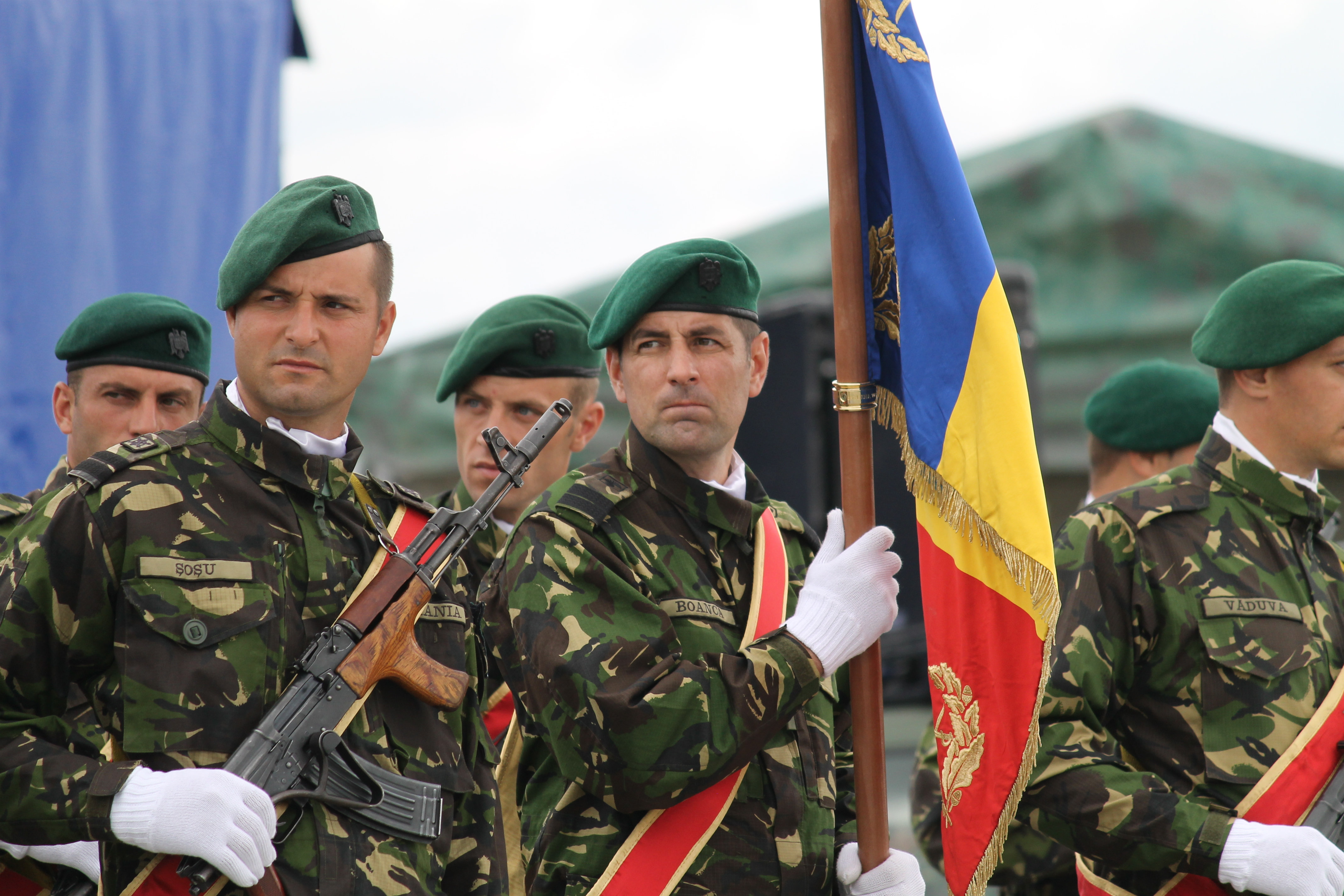 Romanian soldiers wait to greet Romanian President Klaus Iohannis ahead of CALFEX on July 15. The presence of the president at the exercise shows the importance of the operation to Romania and also the importance of the Romanian military to its country as it prepares for any sign of Russian aggression along its Black Sea border. (Jen Judson/Staff)
16 of 22 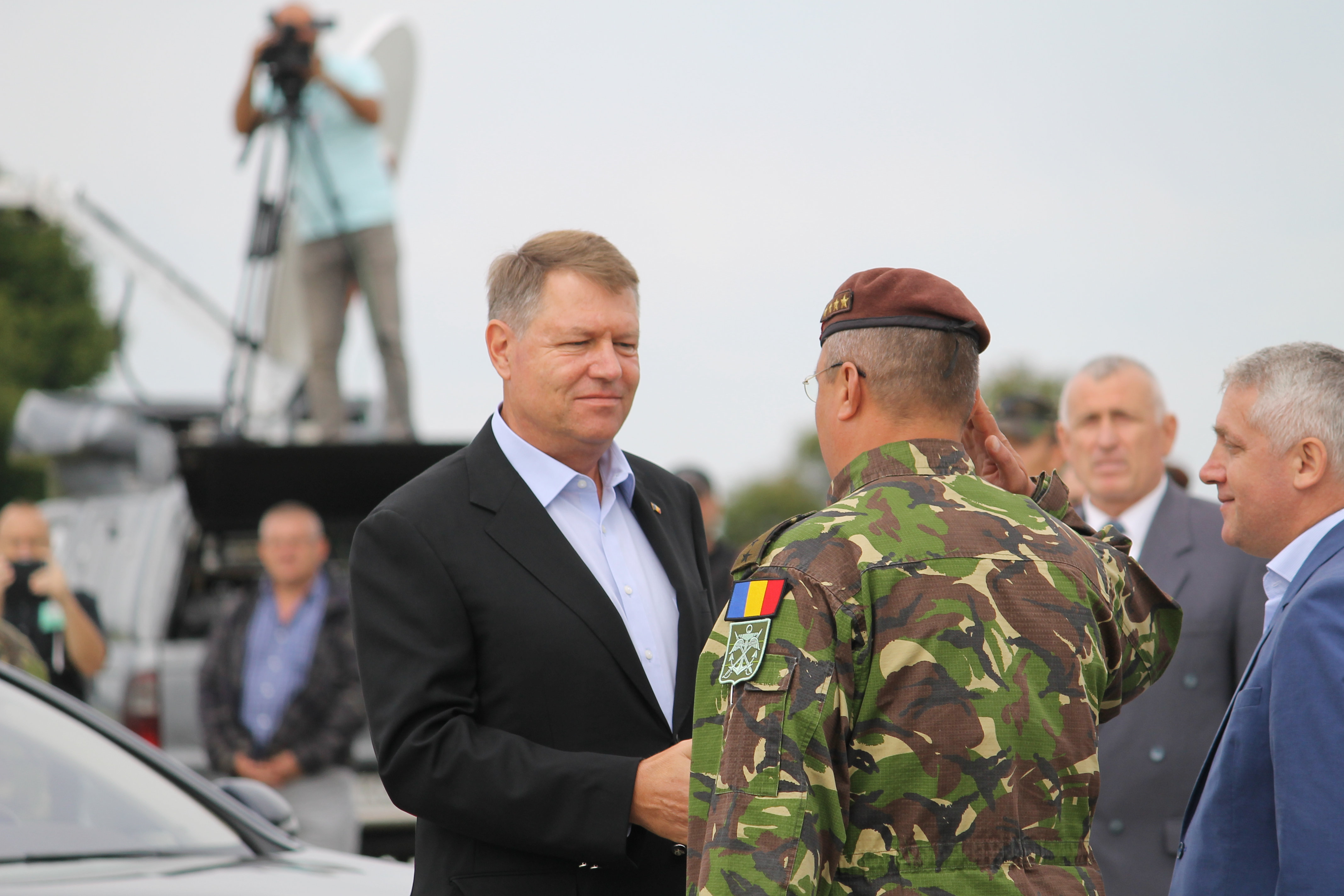 Romanian President Klaus Iohannis, left, shakes the hand of Romanian Chief of Defence Lt. Gen. Nicolae Ciuca at the start of the CALFEX exercise at the Joint National Training Center in Cincu, Romania. (Jen Judson/Staff)
17 of 22 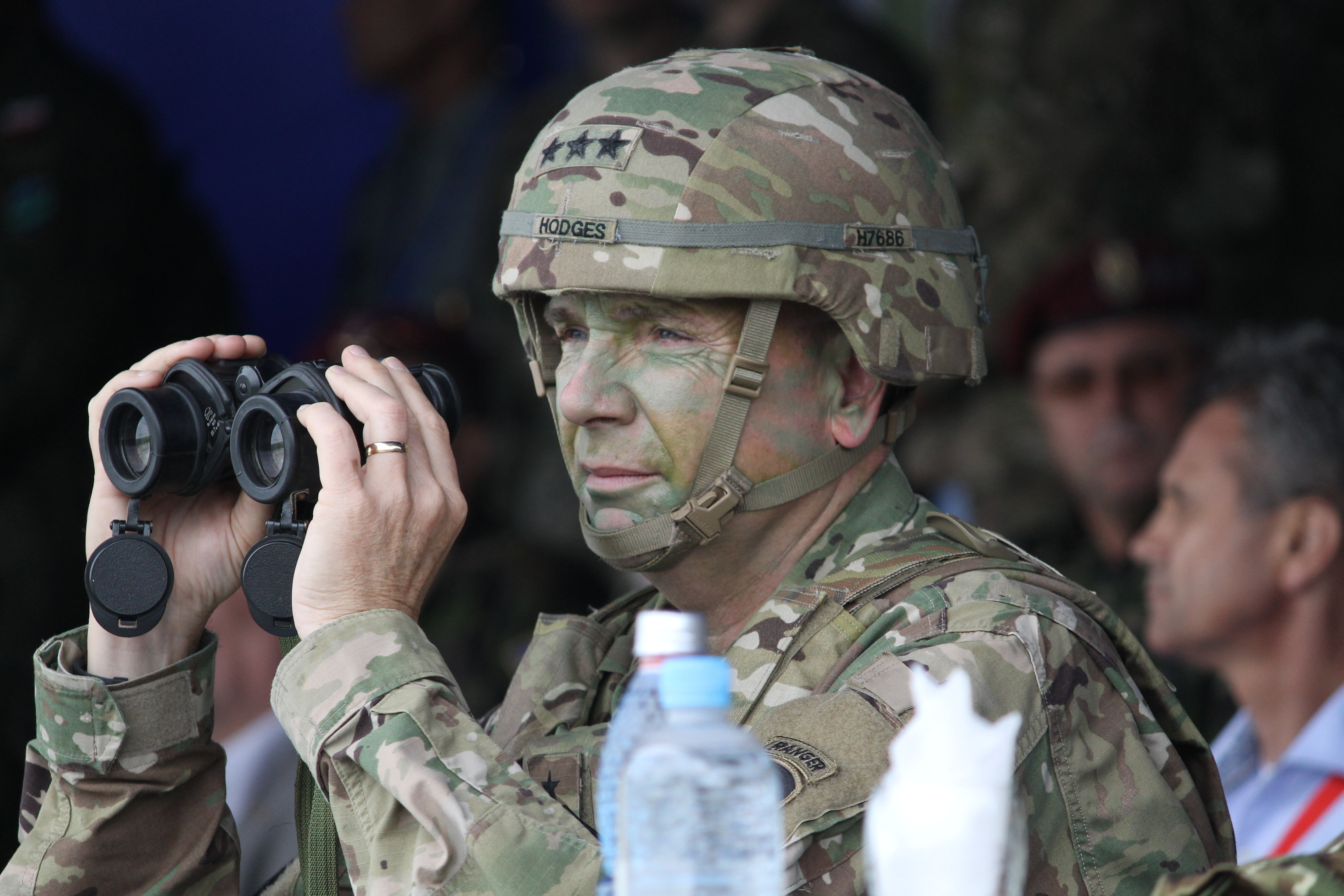 Lt. Gen. Ben Hodges, U.S. Army Europe commander, takes a look out over the live-fire range ahead of the hourlong exercise. Hodges said exercises like CALFEX as part of Saber Guardian are meant to deter Russia aggression by showing strength and unity among NATO and partner nations in Europe. Hodges is slated to retire from the Army in September this year. (Jen Judson/Staff)
18 of 22 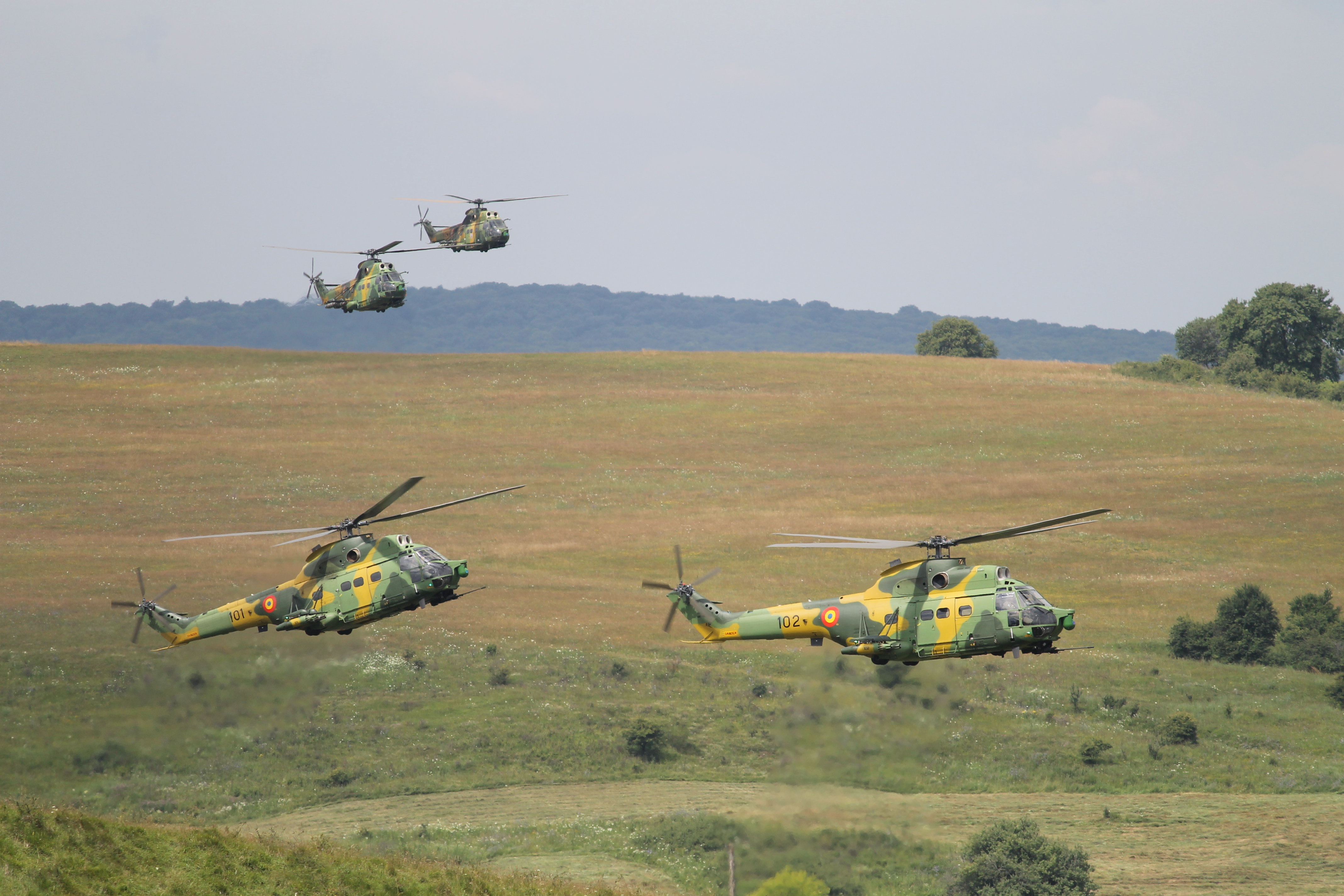 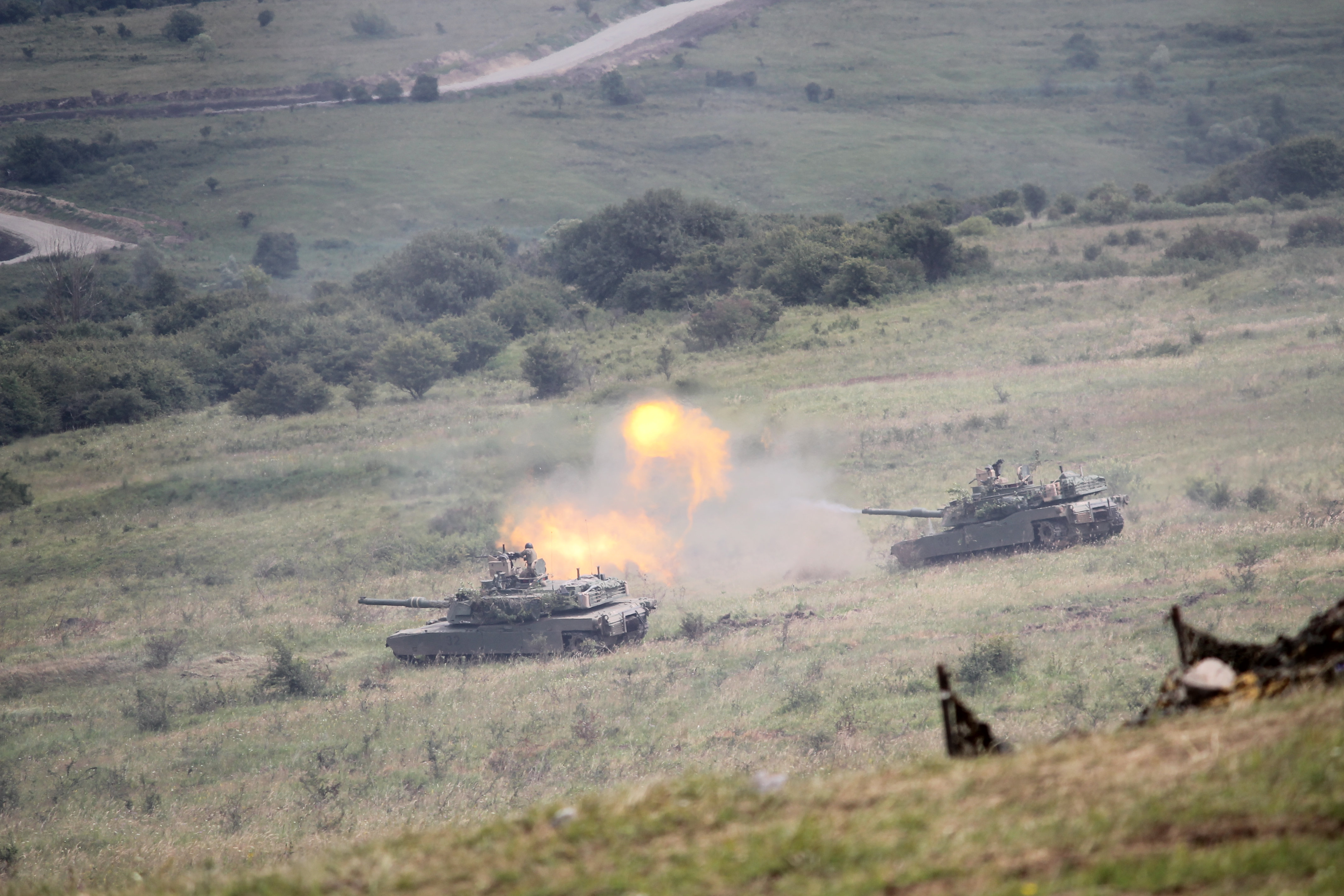 A tank fires on the enemy as it’s forced to commit to its reserves. The multinational task force Iron Guardian’s commander positioned almost all weapon systems on the battlefield to deliver a large volley of fire power at once on the enemy target, completely obliterating the enemy’s reserves in the process. (Jen Judson/Staff)
20 of 22 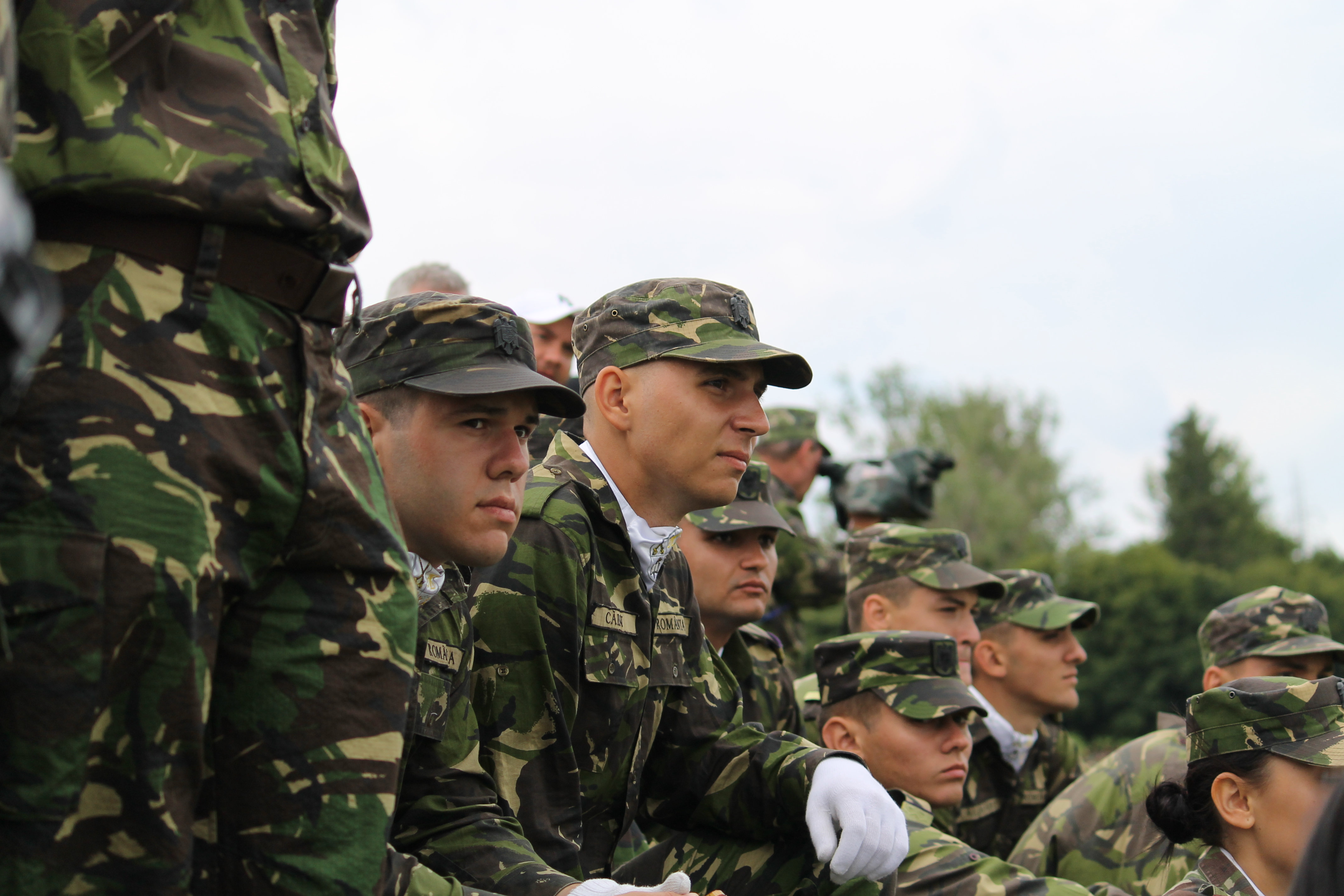 Romanian soldiers observed the massive display of force at their Joint National Training Center in Cincu. The center is being improved exponentially through efforts related to Saber Guardian and will be a center where all NATO partners and other allied nations can train. (Jen Judson/Staff)
21 of 22 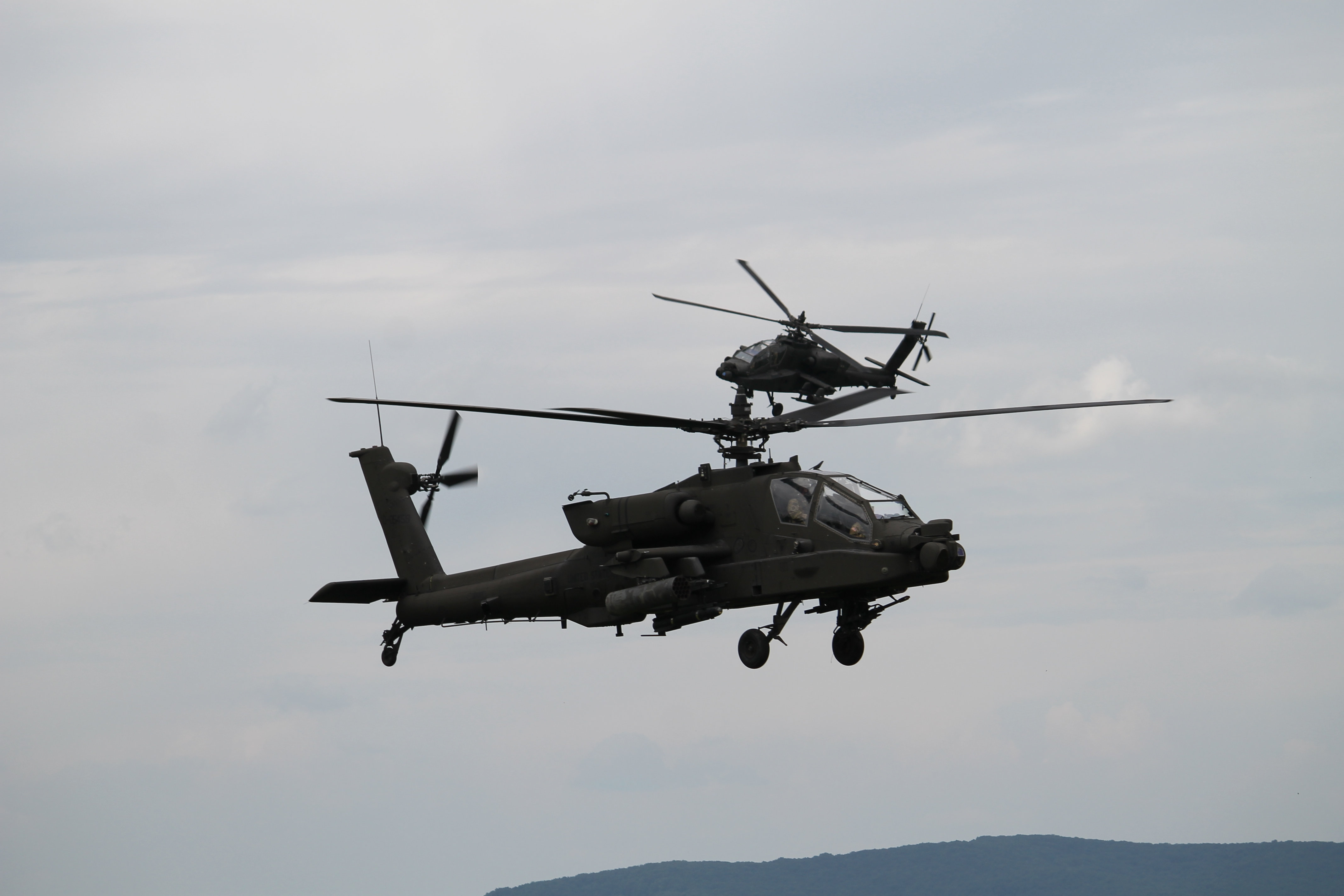 AH-64 Apaches fly out of the training range at the conclusion of CALFEX. (Jen Judson/Staff)
22 of 22 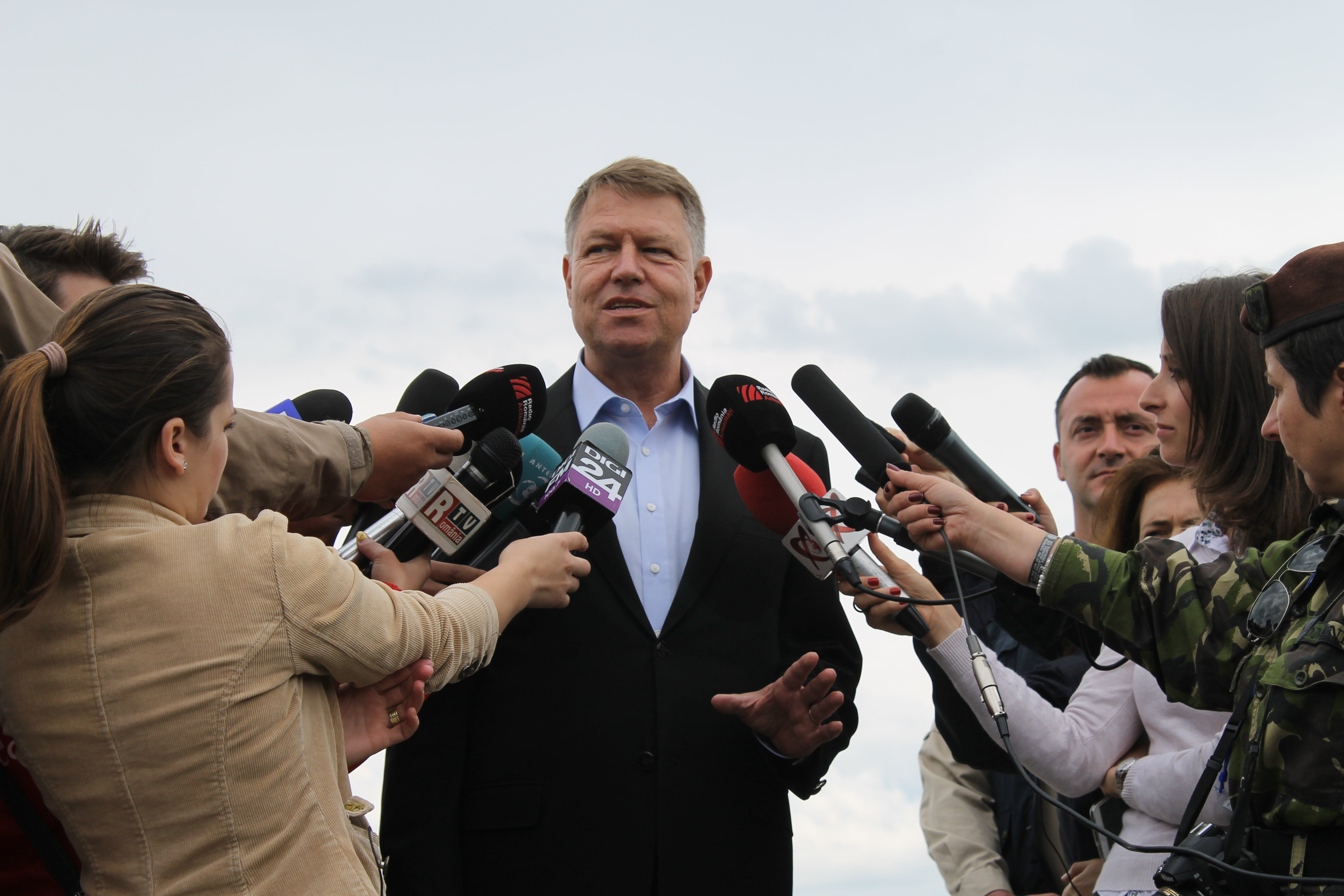 Romanian President Klaus Iohannis briefs the Romanian press about the importance of the exercise; Romania’s role in overall deterrence against Russia; and how it plans to meet the 2 percent of gross domestic product for defense spending as part of a NATO pact. Lt. Gen. Ben Hodges, the U.S. Army Europe commander, told the press he believed Romania would hit its 2 percent target this year, seven years ahead of the deadline. Romania, most recently, has expressed the desire to buy Patriot air-and-missile defense systems from the United States, and the U.S. State Department cleared this potential deal, which awaits congressional approval. (Jen Judson/Staff)
About Jen Judson