China and Russia can increasingly hold overseas U.S. bases at risk. To adapt, the Air Force must evolve from its dependence on well-established airfields, or risk yielding an operational edge.

The Air Force is especially vulnerable to these threats because of its reliance on prepared airfields. While the service can overcome some disadvantages with long-range bombers, a war in which missiles knock out American air bases and prevent the ability to launch and recover short-range fighter jets is unlikely to end well.

To meet this challenge, the Air Force has developed Agile Combat Employment, or ACE.

ACE is an operational concept that leverages networks of well-established and austere air bases, multi-capable airmen, pre-positioned equipment, and airlift to rapidly deploy, disperse and maneuver combat capability throughout a theater. Paired with aircraft fueling, arming and limited maintenance activities, ACE expands the number of bases from which air forces can generate combat sorties.

This severely complicates an adversary’s targeting calculus, as air forces could “pick up” — as Gen. Charles Q. Brown Jr., the Air Force chief of staff, puts it — and move operations at any time.

The Air Force unveiled its shift to ACE in 2017. Since then, through cross-major command initiatives and coordination, ACE has evolved to produce multidisciplinary support personnel, expanded to recurrent use in exercises and served as a foundation to further interoperability.

ACE has also progressed to include other airframes: Bombers were recently incorporated with the standing up of bomber task forces, or BTF. While BTFs have operated from well-established airfields with sizable logistics tails thus far, the Air Force envisions them becoming more expeditionary in the future.

While efforts to date are laudable, more must be done to quickly mature the war-fighting concept, as the threats posed by China and Russia are manifest today. This sense of urgency is reinforced by Gen. Brown’s call for the service to “accelerate change.”

First, access to ally and partner nation airfields must be expanded. If American air forces are constrained to U.S. main operating bases within the Indo-Pacific region and Europe, the ability to “pick up” and move at a time, and to a place, of the combatant command’s choosing is markedly diminished. In turn, capability in theater risks becoming static. Such forces are easy targets for Beijing or Moscow.

Both regional commands are making strides to alleviate this concern: Agreements and infrastructure improvements in the Western Pacific and Eastern Europe serve as examples. However, considering the waves of missiles one might expect at the start of a high-end fight, pursuit of additional operating locations is warranted.

US Air Force tests ‘base in a box’ in Poland 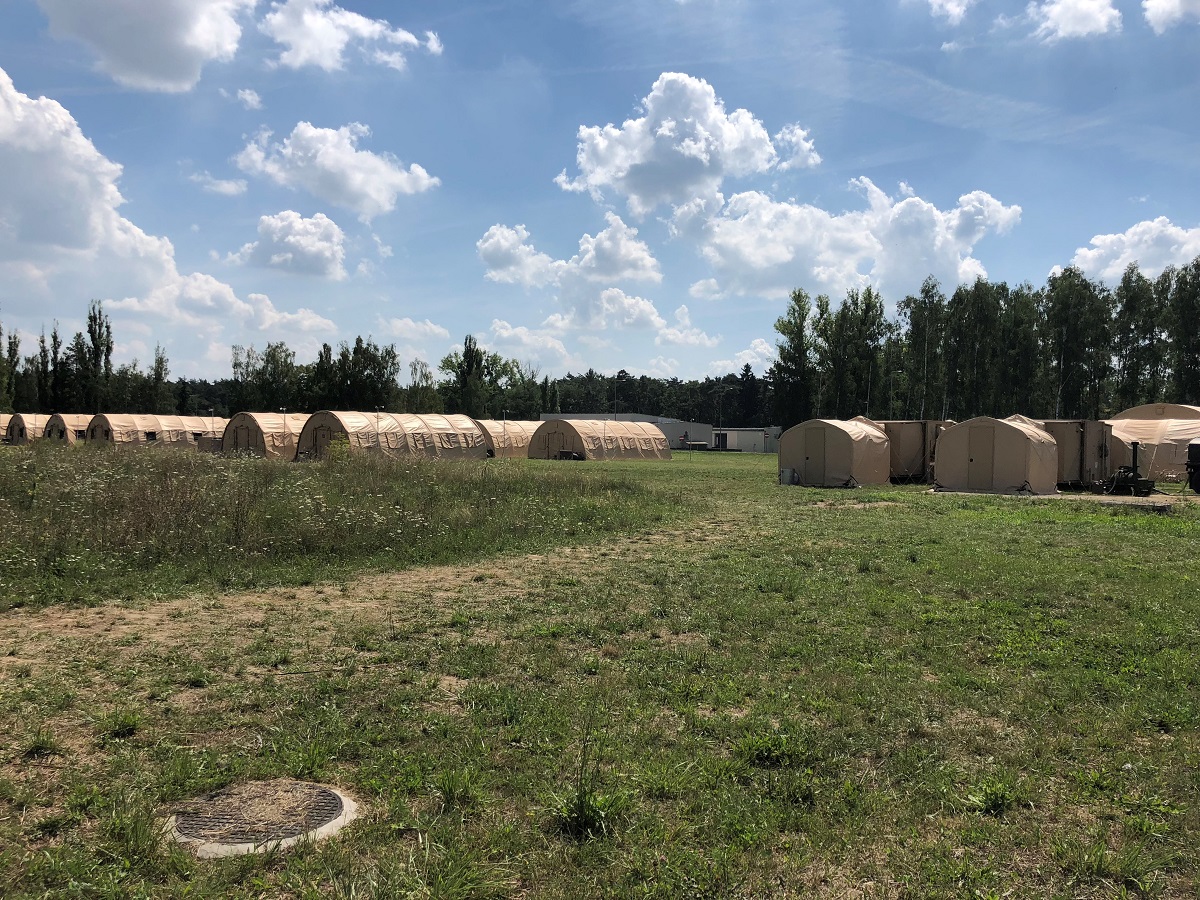 About 60 airmen from 14 different active, Reserve and Air National Guard units set up this tent city at Poland’s 31st Air Base during a July exercise meant to test a smaller, prototype version of the U.S. Air Force's deployable air base system, or DABS, construct. This camp is about one-fifth the scale of an actual DABS, exercise organizers say. (Valerie Insinna/Staff)
2 of 10 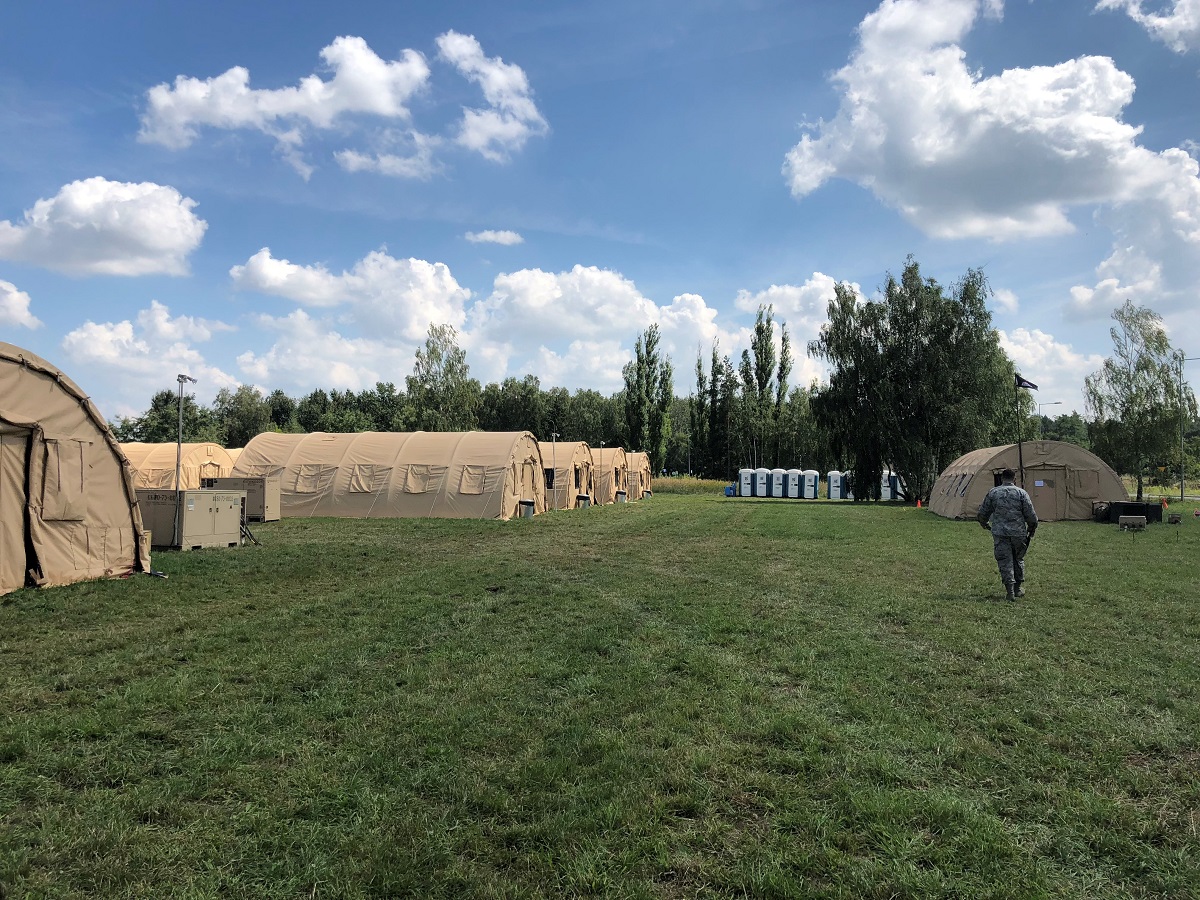 The first-ever DABS proof of concept officially kicked off July 16, when vehicles and supplies started arriving at Poland's 31st Air Base. This photo shows 12 tents used for living quarters, left, with the headquarters of the 1st Combat Communications Squadron, which provided classified and unclassified radio and internet, right. (Valerie Insinna/Staff)
3 of 10 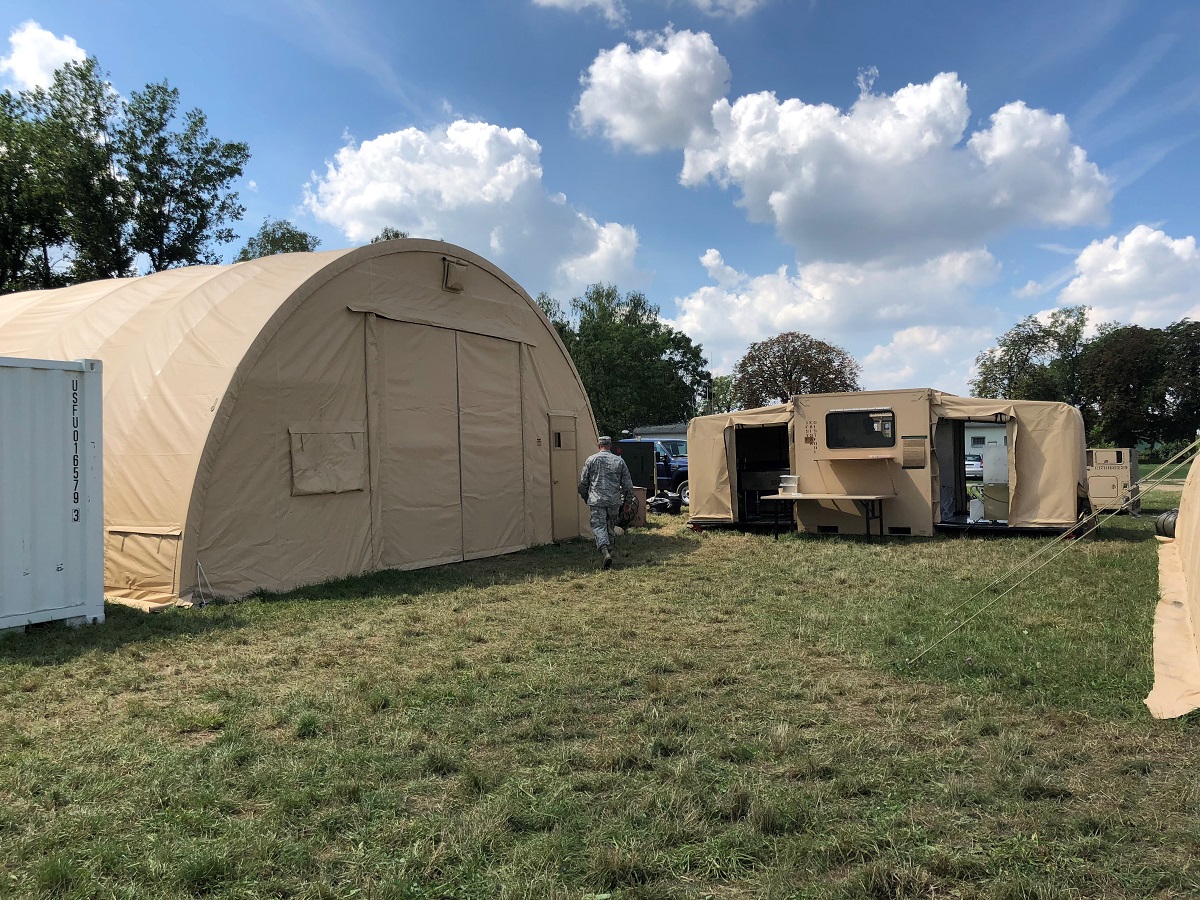 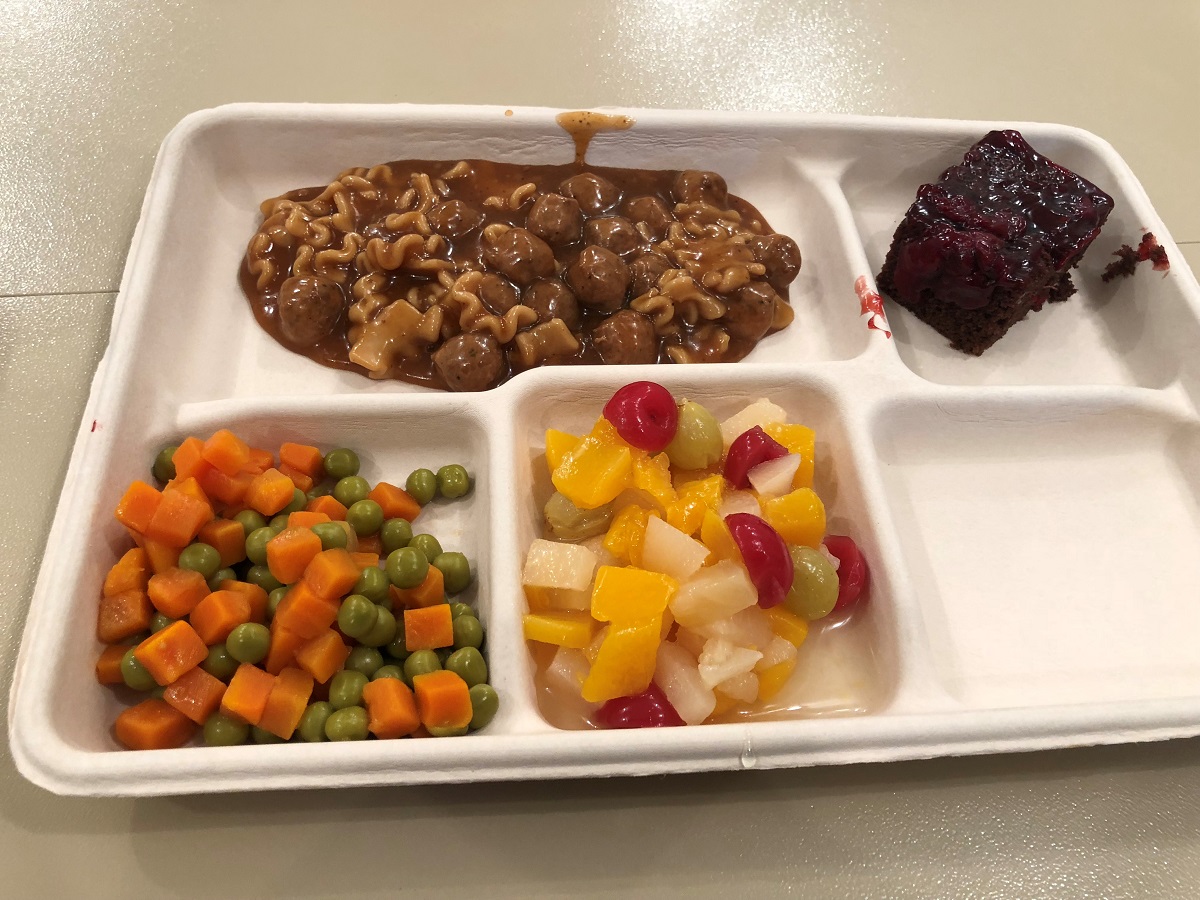 A typical hot lunch of noodles and gravy, fruit cocktail, vegetables, and chocolate cake. The meals were prepared and served by airmen from the 200th RED HORSE Squadron DET 1, Ohio Air National Guard. (Valerie Insinna/Staff)
5 of 10 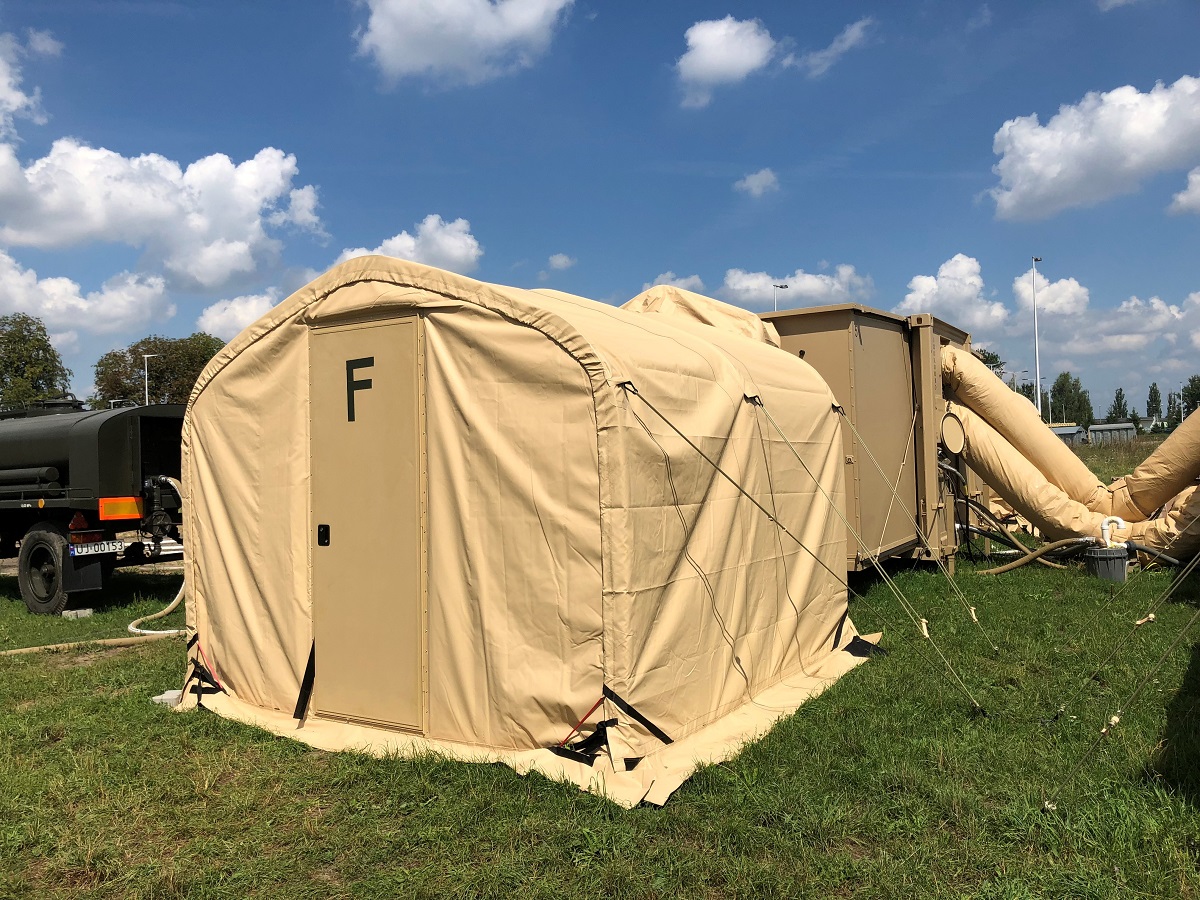 One of the shower facilities available to U.S. Air Force personnel during the DABS proof of concept, which ran from July 16 to Aug. 14, 2018, at Poland’s 31st Air Base. (Valerie Insinna/Staff)
6 of 10 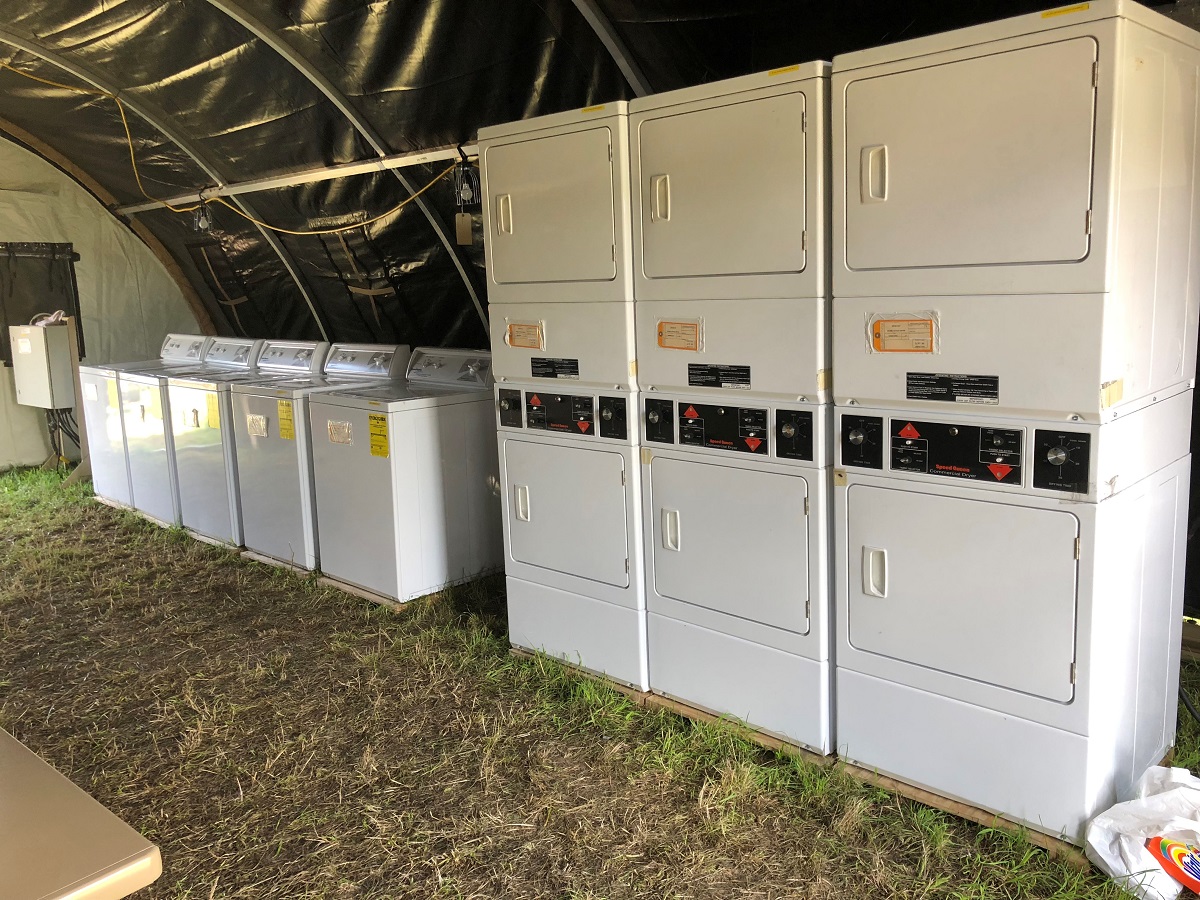 Over the course of the exercise, 87 trucks, two C-130J aircraft and a train moved the equivalent of 321 pallets of equipment into Krzesiny, Poland, by July 31. These washing machines were among that sent via C-130 to the 31st Air Base. (Valerie Insinna/Staff)
7 of 10 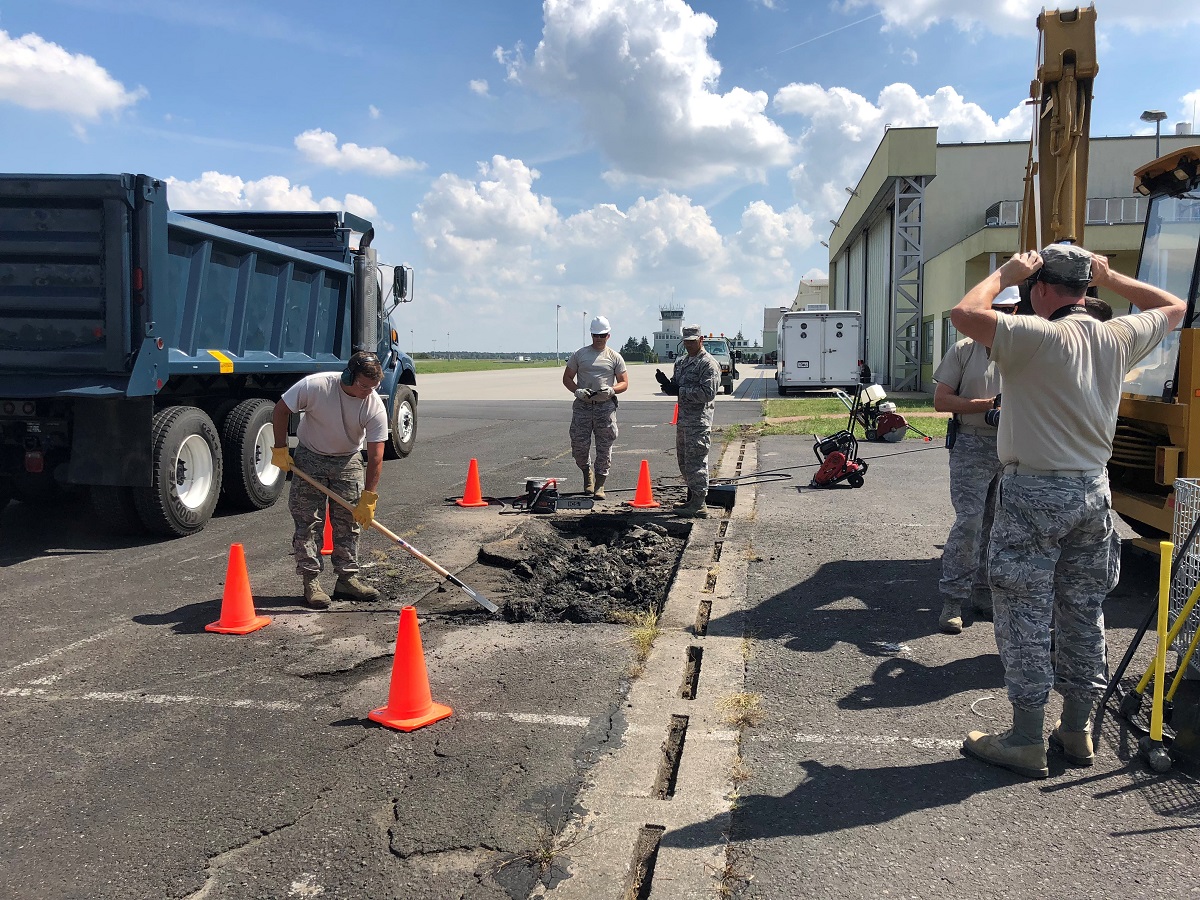 On July 31, several U.S. Air Force civil engineers were tapped to perform airfield work for the Polish armed forces. The troops participating in the DABS exercise used a kit of materiel needed for rapid airfield repairs, such as concrete and asphalt, a variety of saws, and other tools. (Valerie Insinna/Staff)
8 of 10 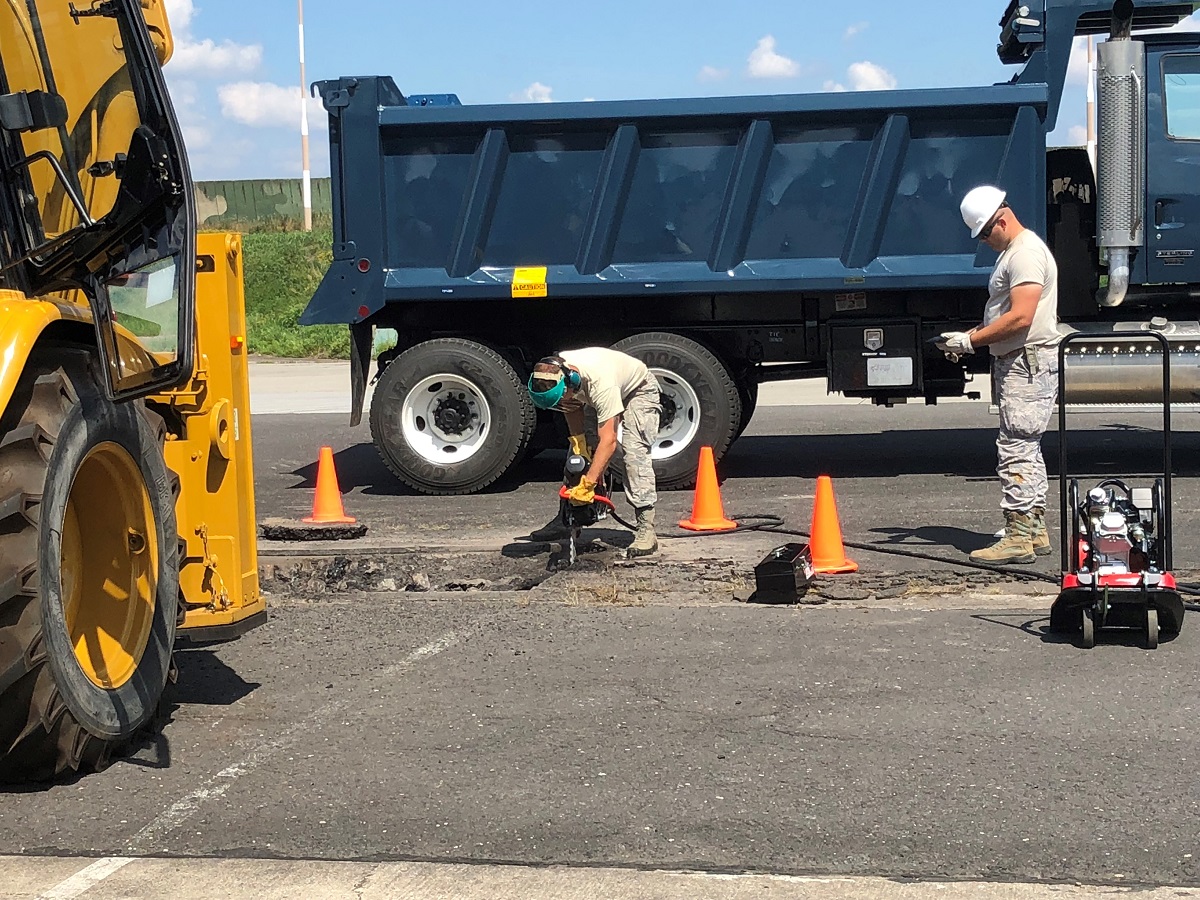 An airman uses a chainsaw to remove damaged concrete before a team of civil engineers fills a sinkhole on a maintenance apron on July 31 at the 31st Air Base near Krzesiny, Poland. (Valerie Insinna/Staff)
9 of 10 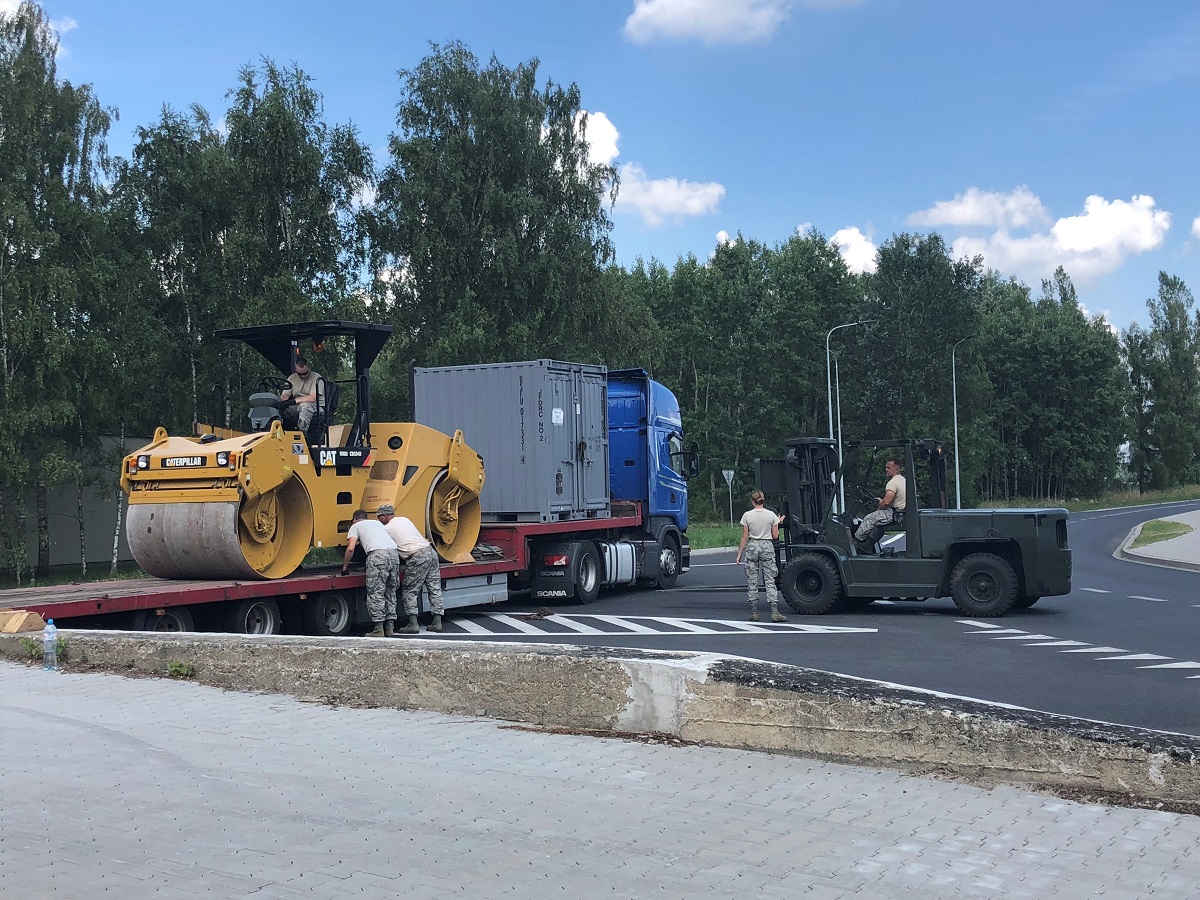 U.S. Air Force personnel, temporarily deployed to the 31st Air Base in Krzesiny, Poland, unload vehicles and shipping containers full of equipment on July 31. The DABS exercise held in July and August will help the service evaluate how quickly it can move materiel onto a partner nation's base. (Valerie Insinna/Staff)
10 of 10 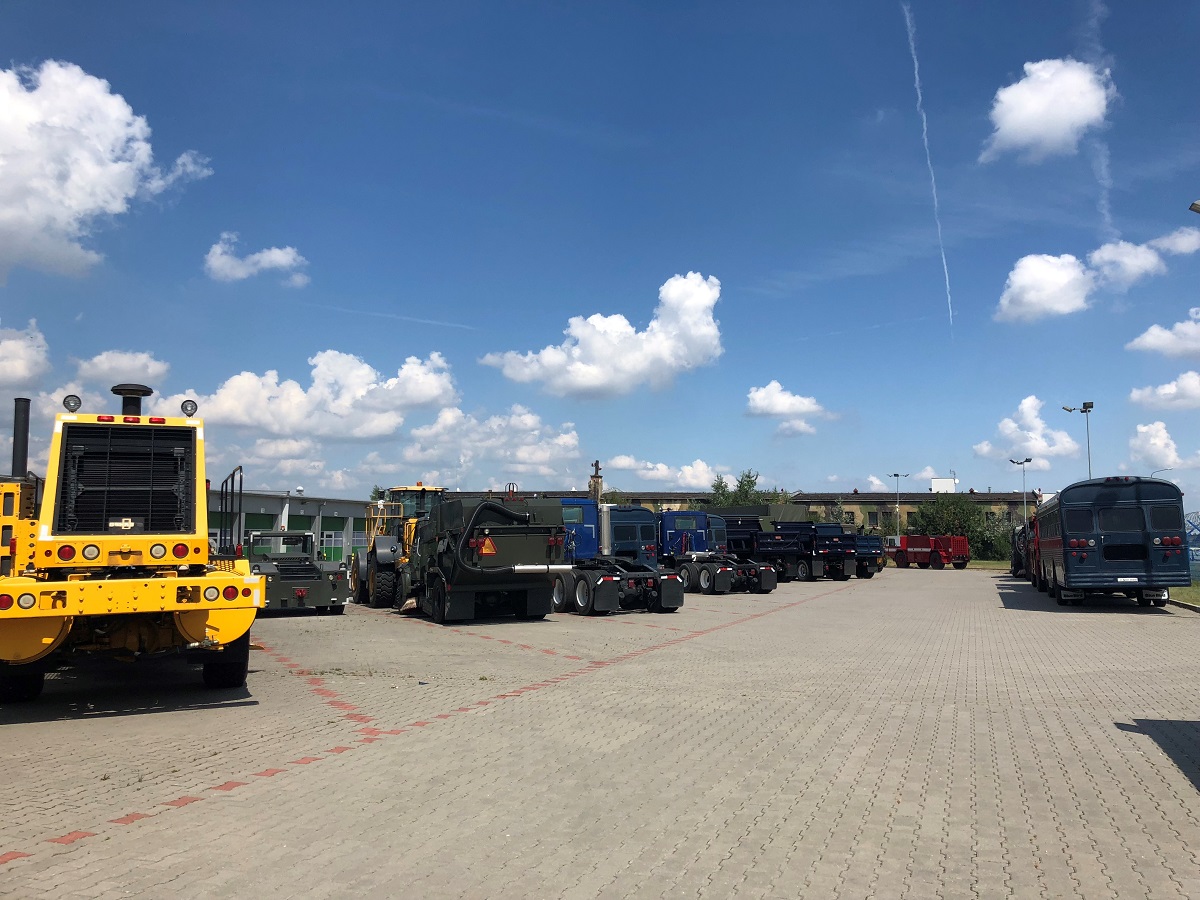 Over the course of the DABS proof of concept, about 60 vehicles and 161 containers worth of equipment were transported from Sanem, Luxembourg, to Krzesiny, Poland, from July 16 to Aug. 1, 2018. (Valerie Insinna/Staff)

Second, the procurement of pre-positioned equipment must be accelerated. To reduce theater airlift requirements, it is imperative to pre-position equipment that airmen will need to support forward aircraft. This is particularly true in the Indo-Pacific, as it lacks the well-established multimodal networks found in Europe.

Unfortunately, procurement timelines for these materials are often lengthy. For example, full fielding of U.S. Air Forces in Europe’s deployable air base system kits is not expected until 2026. This will be protracted further for Pacific Air Force’s regionally based cluster pre-position kits, which have yet to receive funding as part of the Air Force’s latest budget request.

If troops cannot posture these kits in a timely manner, America’s air forces may risk moving to insufficiently outfitted locations — a result that would adversely impact ACE execution.

Third, planners should assess the role and capacity of airlift. Airlift will invariably incur a heavier burden to execute ACE. Needed to carry the crews and cargo supporting fighter aircraft from one location to the next, transport assets prove integral to this concept’s agility. However, given the fleet’s high demand, it is prudent to evaluate whether it could sustain ACE across a contested environment. This examination should account for current and future demands to fully identify air mobility limitations. The findings would help determine the right mix of airlift and whether requirements exist for an airframe not in the inventory or more long-range bombers.

Finally, the Air Force must broaden its training to create multi-capable airmen. Due to finite capacity to rapidly shift support personnel worldwide, the Air Force is training airmen to take on roles outside of their traditional jobs. This effort reduces the logistics tail required to project combat power.

Thus far, multi-capable training has been developed and executed by various major commands, and — at the start of this year — the Air Force began crafting a program baseline. To build on this foundation and produce multirole airmen from the outset of their military career, incorporating the new training standard into applicable technical schools would aid in growing the requisite skills needed to compete in tomorrow’s fight.

Each of these components is critical to ACE’s success against a peer adversary. Without timely development and implementation — in the words of Gen. Brown — “we risk losing the certainty with which we have defended our national interests for decades.”

Maj. Scott D. Adamson and Maj. Shane “Axl” Praiswater are visiting military analysts with the Center on Military and Political Power at the Foundation for Defense of Democracies. Views expressed or implied in this commentary are solely those of the authors and do not necessarily represent the views of the U.S. Air Force or any other U.S. government agency.