Held Up In the Shipyard, Carrier Bush Is Under The Gun To Deploy On Time

WASHINGTON – The USS George H. W. Bush, newest of the fleet’s operational carriers, is under the gun. The ship emerged from a shipyard in late July five months late – seven if compared to the original schedule. It's facing a planned deployment later this year that needs to be on time if the Bush is to relieve another carrier already operating on the far side of the world. With a compressed training schedule, Norfolk-based Fleet Forces Command (FFC) is wrestling with how to get the ship, its air wing and supporting strike group fully ready to deploy to a combat zone, a situation its Optimized Fleet Response Plan (OFRP) was conceived to handle.

Dealing with the Bush’s situation crosses a lot of Navy bailiwicks, including Naval Reactors and Naval Sea Systems Command (NAVSEA) in Washington – the latter also overseas Norfolk Naval Shipyard, where the Bush’s overhaul was performed – to Fleet Forces Command to the Pentagon’s joint planning offices, where the global disposition of the fleet’s carriers is decided. And out in the Persian Gulf, the crew of the carrier Dwight D. Eisenhower is hoping the Bush arrives around the first of the year, in time for Ike’s strike group to return home after seven months on deployment.

"Step two is to execute the plan. In this regard, one of the areas that's getting a lot of attention, inside and outside of the Navy, is ship and aircraft maintenance -- getting into deep maintenance and getting out on time. That's usually the first step of the readiness cycle."

Next, Richardson said, "is to execute your deployment training and certifications on time and at standards. Once this cycle is complete, a ship is ready to deploy. In parallel, we are working the manning, supply load, and weapons loads so that the right people are trained and on board, and so that the ship can sustain itself on station forward deployed. And that's OFRP -- the optimized plan -- in a nutshell. It sounds simple, but it's a lot of moving parts."

OFRP is a refinement of the Fleet Response Plan, an effort that in part attempted to bring order to the often chaotic process of deploying ships, particularly carriers, with little advanced notice. OFRP essentially expands the plan for carriers to apply to other ships – cruisers and destroyers – in the strike group.

"But OFRP first and foremost," Richardson said, "is a constant effort to seek better ways to get ready and prepare for deployment --- the people flowing in at the right time for training, parts and ordnance arriving on time, then making sure the training is phased appropriately. That's all part of this balance that we are trying to strike within the resources we are given.

"Right now," Richardson said, "I'd have to say we are most challenged by step two -- our biggest challenge remains the maintenance. We've got to get through maintenance on time, on schedule, and then the rest of it is set up to fall into place."

The Bush entered Norfolk Naval Shipyard in June 2015 for what the Navy calls a planned incremental availability (PIA), an overhaul that was to be supervised by the shipyard, with General Dynamics National Steel Shipbuilding Company in Norfolk handling non-propulsion repair work, supported by nearby Huntington Ingalls Industries’ Newport News Shipbuilding. GD NASSCO was awarded $46 million for the work, according to the Navy, while Newport News was operating under a $23.8 million contract award.

The overhaul was scheduled to last six months, with the ship returning to service in January 2016, but as she headed up the Elizabeth River to enter the shipyard NAVSEA issued a statement that the PIA would be extended to eight months "largely due to critical path work on the Vacuum Collection Holding Tanks (VCHT)."

VCHTs refer to the ship’s waste disposal system, using vacuum technology rather than a seawater system to service hundreds of heads – toilets – sinks and showers on board. The technology is not new – it was used on Spruance-class destroyers designed in the 1960s and is a common feature on modern cruise ships. The Bush was the first carrier with the system.

But problems with the VCHT system plagued the carrier right from when she entered service in 2009. During one infamous deployment in 2011, the situation was so bad that at times only a handful of the ship’s toilets were working, according to family members who first reported the situation to reporters, and the ship’s command was ordering crewmembers not to use toilets frequently. The ship’s leadership denied the severity of the problem, but the Bush’s VCHT system has never functioned reliably.

Fixing the issue was a major focus of the PIA, but it is not clear why the Navy felt the need to tack on an extra two months to work on the VCHTs rather than performing the job concurrent with other work.

In the event, work on the system was a factor in the overhaul’s workload growth of 25 percent, said Capt. Thurraya Kent, a spokesperson for the Navy’s acquisition authority, and "completion of work associated with [Newport News] jobs contributed to, but was not a primary cause of the delivery delay."

Rather, she added, "the primary causes of the PIA delay were the compounding effects of planning workload that exceeded shipyard capacity, and late-identified required maintenance work that resulted in inefficient execution of both [Norfolk Naval Shipyard] and [Newport News] production work."

It is not clear what factors led to the planning workload becoming more than Norfolk shipyard could handle, or what work was identified so late as to more than double the overhaul period.

Kent noted there was a growth of about 30 percent in the work allotted to Newport News. The shipbuilder, she said, "has worked with its customers and Navy leadership to mitigate any impact of the extended duration of the PIA."

She declined to provide the final cost of the overhaul, saying the "availability is fleet-funded and these funds were used to cover the new work growth."

And while further improvements to the VCHT system have been scheduled for the future, the Navy is hopeful the heads on the Bush may finally work normally.

Kent and NAVSEA also insisted that no other shipyard work was deferred during the Bush’s extended stay in the shipyard, and that the yard managed its way through several months of reassigning hundreds of workers to the carrier. 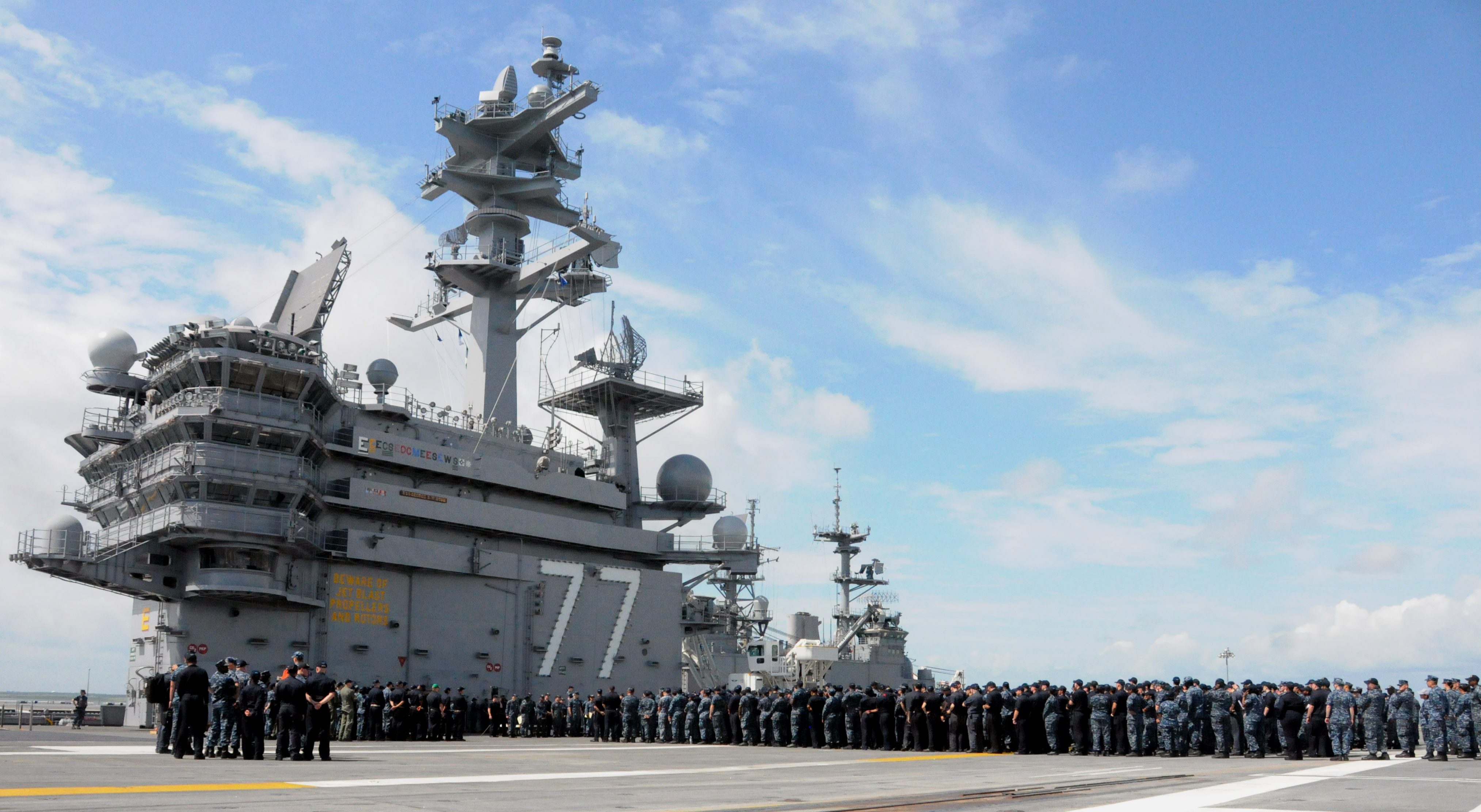 Sailors of the George H. W. Bush gather on the flight deck Aug. 3 for an all-hands call, days after the ship returned to the fleet after more than a year in overhaul. The crew faces a compressed training period to prepare for deployment.
Photo Credit: null
Fleet Forces Command now has the responsibility to oversee the Bush’s workup period under a compressed timeline. FFC declined repeated requests to discuss the ship’s situation, or to describe how the OFRP will be used to handle the compressed training period.

"As a matter of policy, we do not discuss the future schedules of carrier strike groups," Adm. Phil Davidson, commander of FFC, said through a spokesman.

"The primary responsibility of Fleet Forces Command is to man, train and equip forces to safely and competently fulfill the requirements of combatant commanders for routine deployments and for contingency and crisis," Davidson said. "As always, our carrier strike groups will be where the nation needs them, when the nation needs them."

FFC leaders were to meet in late August to discuss the strike group’s situation and make some decisions about when the ships could deploy, and Navy officials cautioned not to assume the Bush would head out in December.

But if the Bush is to relieve the Eisenhower on time, avoiding either an extended deployment for Ike or another carrier gap in the Central Command operational area, that’s about when she’d have to leave.

"The main focus of effort now is finding ways to get Bush through the training cycle so it can deploy as scheduled with all necessary certifications," said a Navy official.

"At this point, there has been no serious discussion of delaying their deployment or extending Ike. If anything changes, sailors and families from the two strike groups will be the first to know."

The Forge software factory is in need of stable resourcing

Congress needs to snatch victory from the jaws of technological defeat by committing to stable resourcing and leadership support for the solutions this capability generates.

After technical challenges in 2020, the Navy says it can get the SSC production line moving and craft fielded to operational units this year, ahead of IOC next year.

Steps Lockheed Martin is taking today to virtualize its Aegis Weapon System are helping to underpin the U.S. Navy’s integrated combat system and the Pentagon’s vision for joint all-domain warfare.

The Dakar-class diesel-electric submarines will be produced by German manufacturer ThyssenKrupp and are expected to be delivered within nine years.

The Navy's amphibious ship requirements study isn't quite done yet. But all the signs are pointing to a smaller fleet for the Marine Corps.

New veteran site gets YOU jobs