Reid used a procedural maneuver that will effectively derail plans to pass the bill before the Memorial Day recess, telling reporters the Senate needs time to dissect the 1,600-page bill. Democrats forced Republicans to file a cloture petition on a motion for the bill to proceed, which delays its consideration two days, until Wednesday.

In a bit of Congressional gamesmanship, McConnell, R-Ky., and Reid, D-Nev., in consecutive press conferences cast one another's party as the obstructionists. McConnell called out Reid on the 2017 National Defense Authorization Act, and Reid called out McConnell over delayed Democratic priorities, including the US Supreme Court nominee, anti-Zika funding and aid for the town of Flint, Mich.

"It's pretty clear the Democratic leader is not anxious for us to do anything quickly around here," said McConnell.

McCain, R-Ariz., who noted the bill's passage out of committee with solid Democratic support, said the nation's endangered national security makes it "imperative" to proceed to authorize pay, benefits and training for service members and their ability to defend the country.

The far-reaching $602 billion policy bill touches on a wide range of topics, including major weapons systems, acquisition reform and the size of the military—as well as a requirement that women sign up for a draft, if one was instituted, and continued restrictions on the president's ability to shutter Guantanamo Bay prison, in Cuba.

McCain accused Reid of pulling out the stops to block passage of the bill for partisan reasons, which he called "shameful" and "disgraceful." 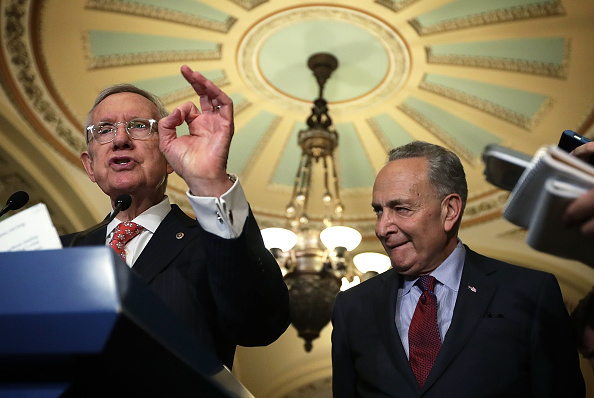 Reid later fired back at McCain’s "gall" to criticize delays when, in 2010, McCain lead a filibuster of the annual defense policy bill. The bill faced opposition over its proposed repeal of the military's "Don't Ask, Don't Tell" policy.

Reid noted the 2017 bill was considered, "in secret," in a closed session of the Senate Armed Services Committee.

"And throughout that bill are all kinds of earmarks—goodies—that John McCain the ear-marker put in this bill," Reid said. "So I think it's appropriate for my staff to go through that bill, that was decided in secret, and find out what goodies are hidden in there."

Joe Gould is the senior Pentagon reporter for Defense News, covering the intersection of national security policy, politics and the defense industry. He served previously as Congress reporter.

China surpasses US in number of ICBM launchers

The STRATCOM notification prompted Republicans to push for expanding the U.S. nuclear arsenal beyond the current modernization efforts.