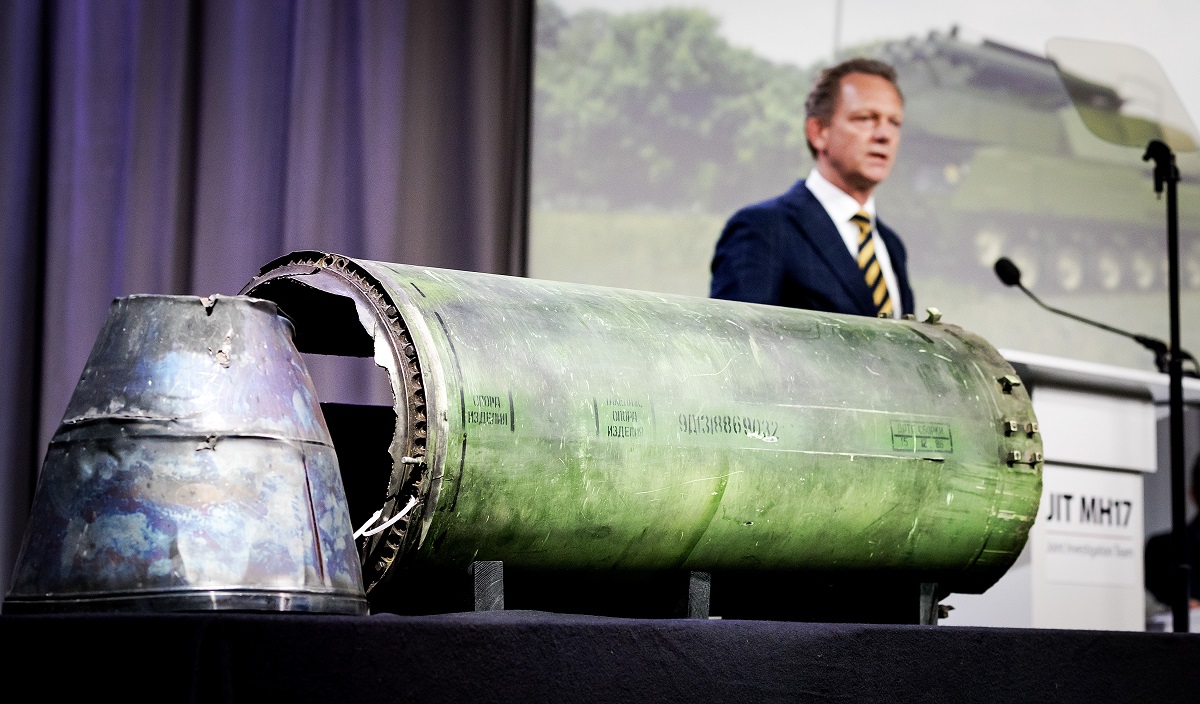 Head prosecutor Fred Westerbeke speaks next to a part of the Buk rocket that was allegedly fired on Malaysian Airlines Flight MH17 during a news conference of the Joint Investigation Team in Bunnik, the Netherlands, on May 24, 2018. (Robin van Lonkhuijsen/AFP via Getty Images)
2 of 7 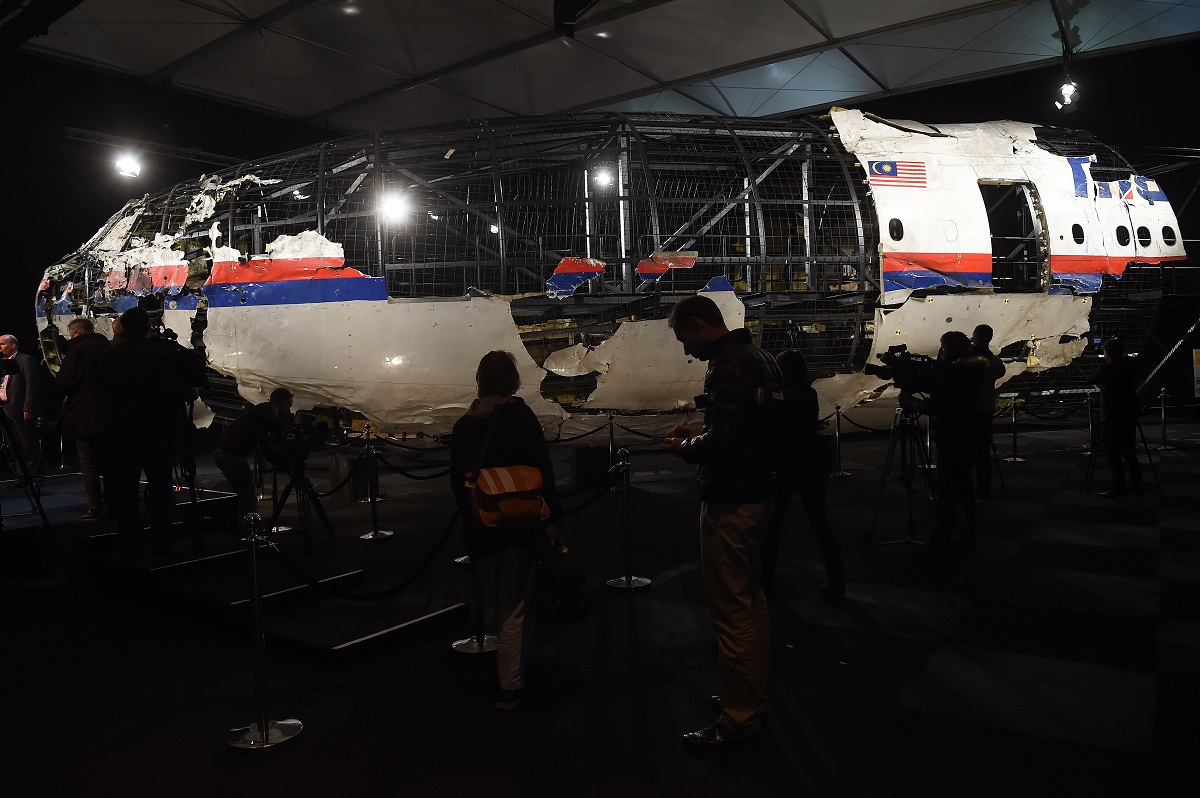 The wrecked cockpit of Malaysia Airlines Flight MH17 is presented to the press at the Gilze Rijen air base on Oct. 13, 2015. (Emmanuel Dunand/AFP via Getty Images)
3 of 7 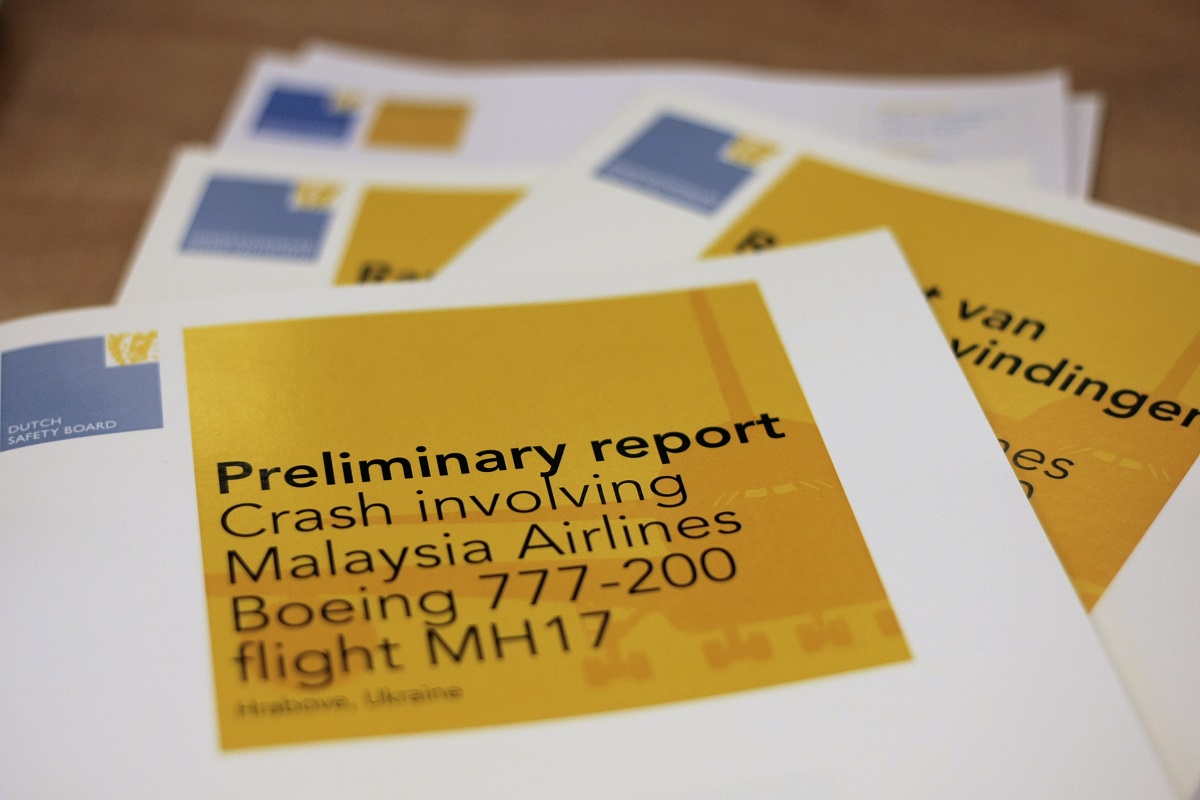 A stack of preliminary reports by the Dutch Safety Board on the crash of Malaysia Airlines flight MH17 is displayed on Sept. 9, 2014, at the board's headquarters in The Hague, Netherlands. (Mike Corder/AP)
4 of 7 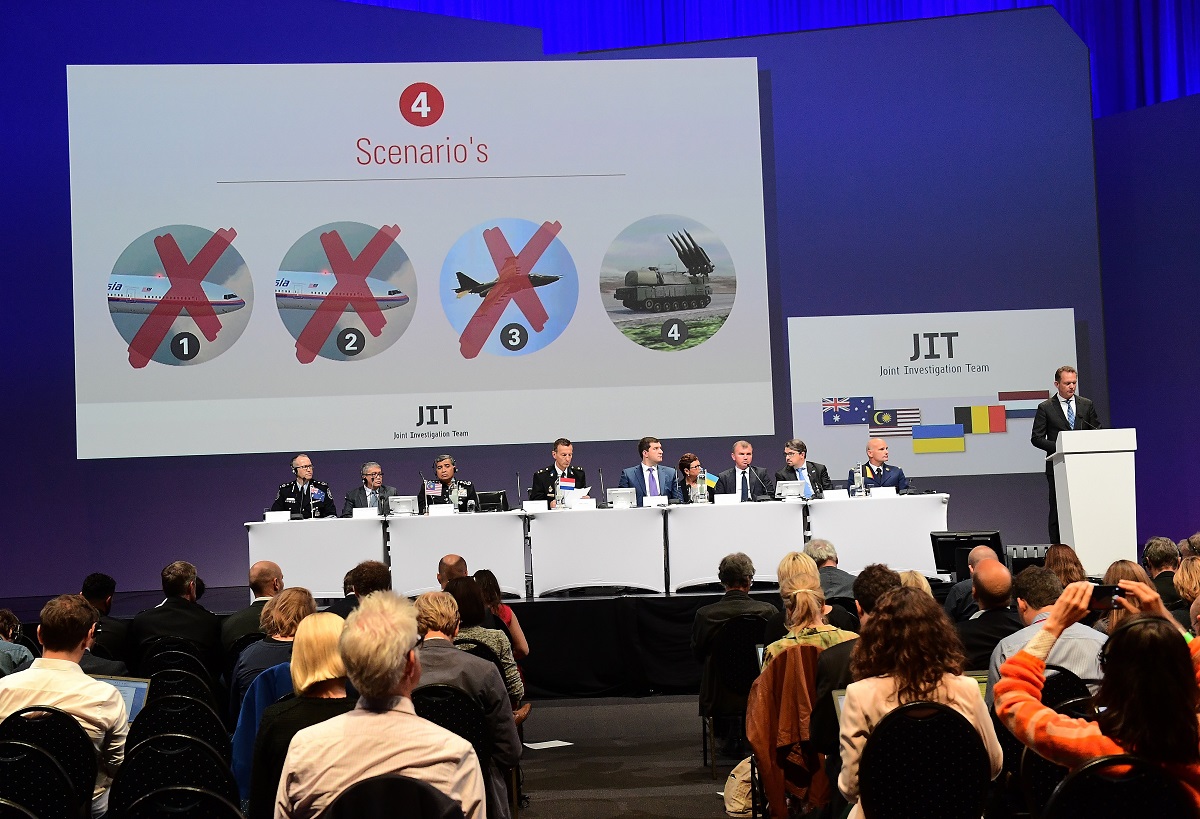 Russia has always denied responsibility for the aircraft’s downing, previously suggesting a Ukrainian ground-attack jet or a Ukrainian Buk as likely suspects, although such alternative theories have since been ruled out. (Emmanuel Dunand/AFP via Getty Images)
5 of 7 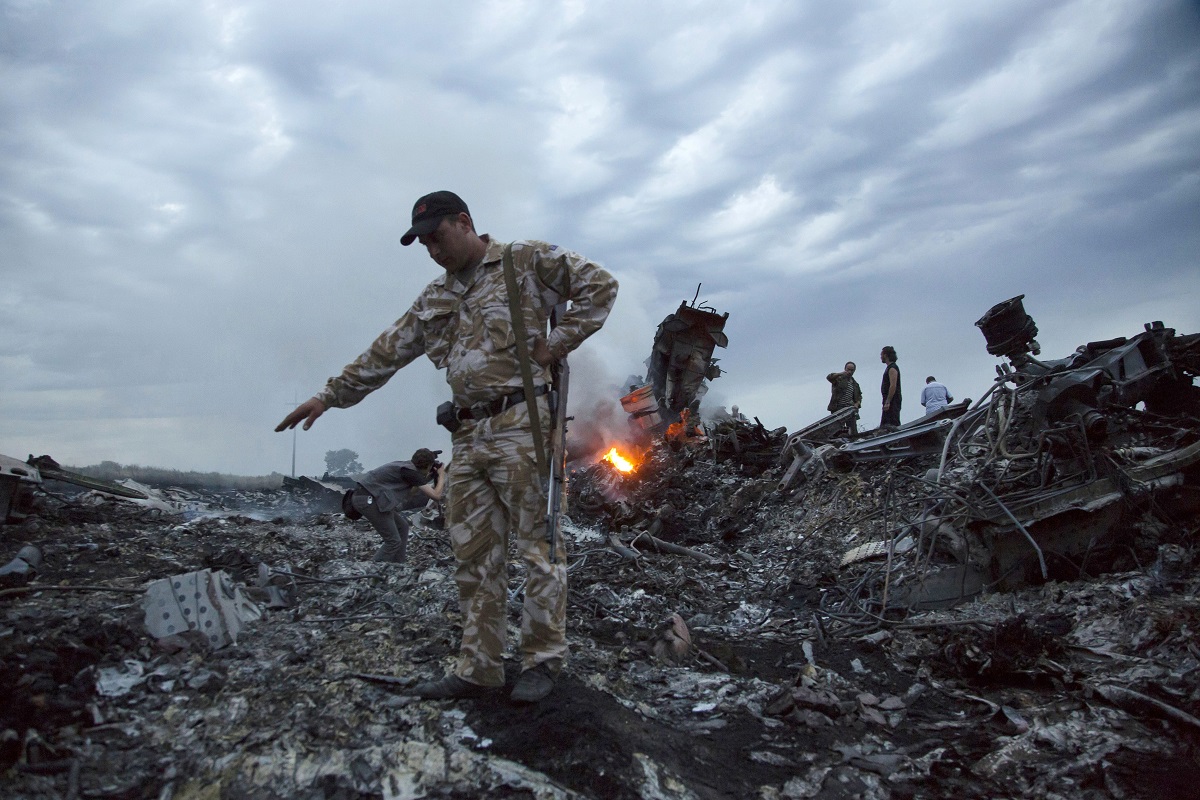 People walk among the debris at the crash site of Malaysian Airlines Flight MH17 near the village of Grabovo, Ukraine, on July 17, 2014. (Dmitry Lovetsky/AP)
6 of 7 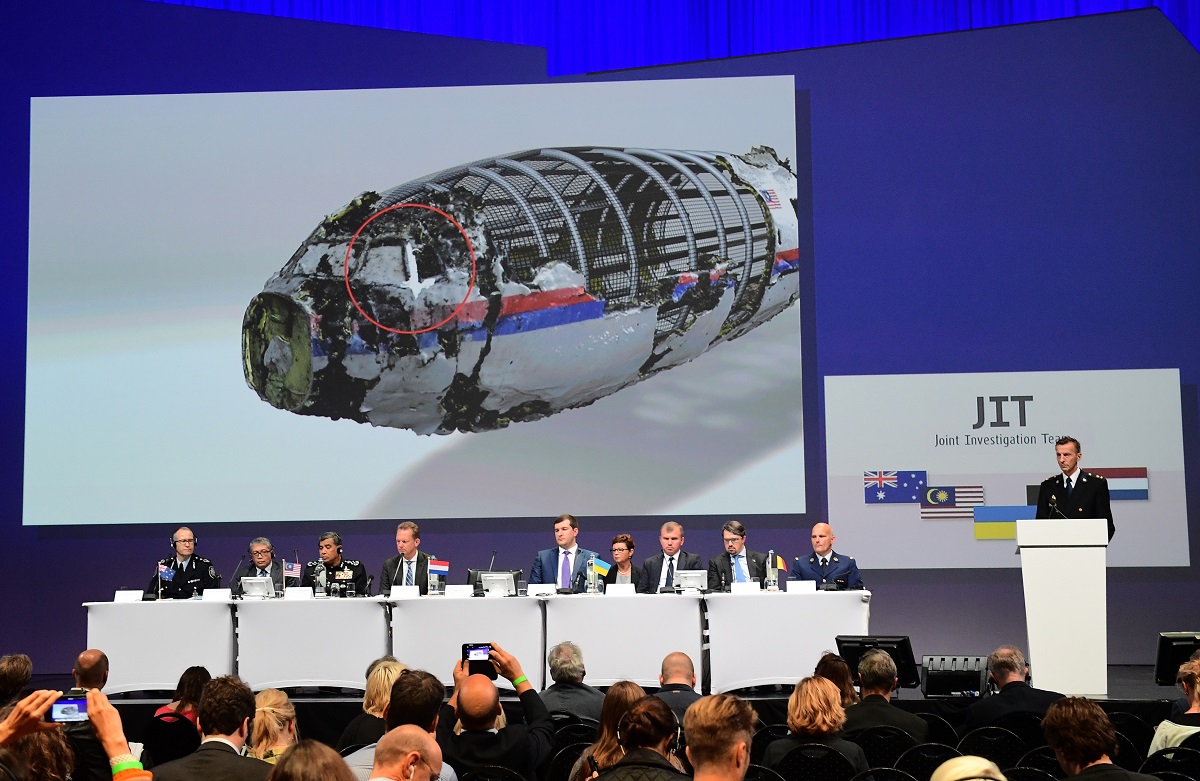 The downing of a Malaysian airliner over Ukraine in 2014 killed all 298 passengers and crew on board. (Emmanuel Dunand/AFP via Getty Images)
7 of 7 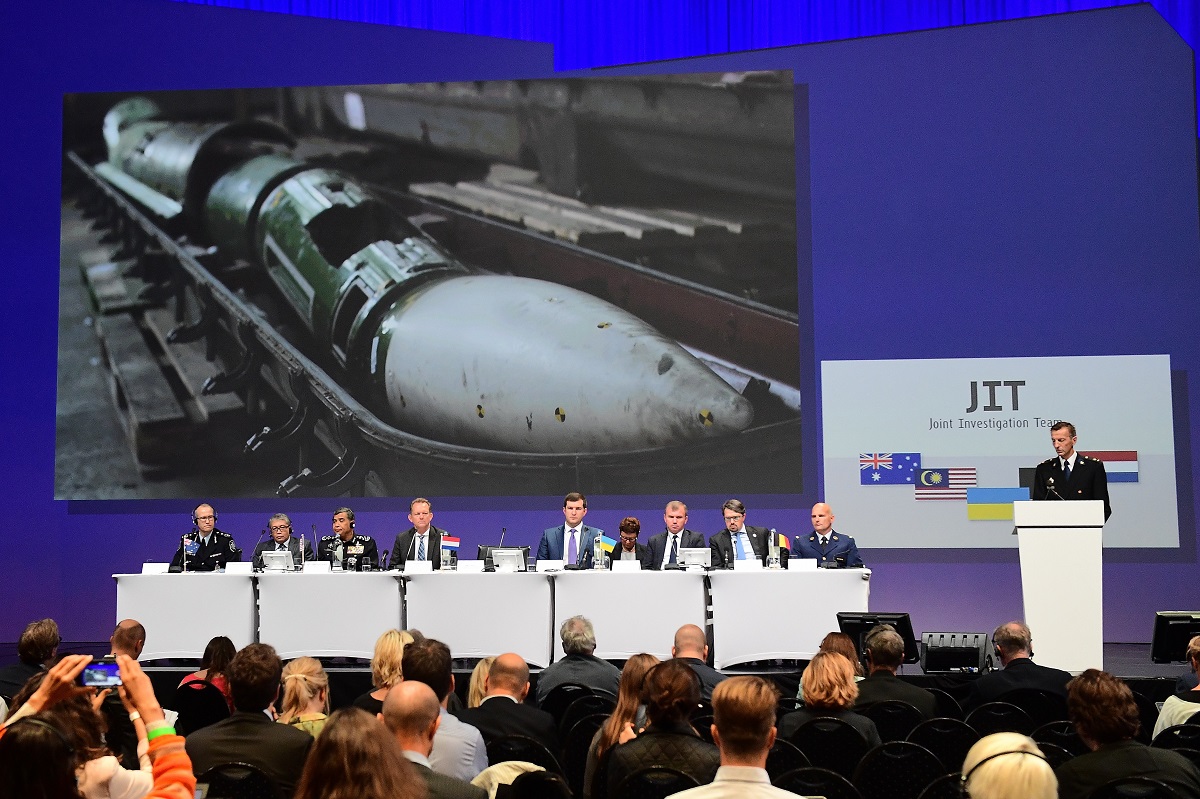 Members of a joint investigation team present preliminary results of the criminal investigation into the downing of Malaysia Airlines Flight MH17 in Nieuwegein, on Sept. 28, 2016. (Emmanuel Dunand/AFP via Getty Images)

MELBOURNE, Australia ― The Dutch-led team investigating the shooting down of a Malaysian airliner over Ukraine in 2014 has named the Russian military unit suspected of providing the missile system that shot down the aircraft, killing all 298 passengers and crew on board .

The Joint Investigation Team, or JIT, named the 53rd Anti-Aircraft Missile Brigade of the Russian military as the unit that provided the 9K37 Buk transporter, erector, launcher and radar, otherwise known as a TELAR vehicle, that was used to shoot down Malaysian Airlines Flight MH17 over eastern Ukraine on July 17, 2014. The region was host to a conflict between Ukrainian government forces and militants armed and backed by Russia.

To support its claim, the JIT showed photographic evidence of the TELAR that entered eastern Ukraine from Russia and left again the same day after the MH17 was shot down, which displayed seven unique distinguishing features referred to as “fingerprints” by investigators.

These include paint marks and damage on the side skirts of the vehicle, center of gravity and railway transport markings, and the unique road wheel configuration of the suspected TELAR, whose second road wheel on the right-hand side of the vehicle was different from the rest of the vehicle’s road wheels.

All these distinguishing features were noted on the TELAR as it made its way to Ukraine, captured on multiple dashboard cameras of passing cars or shot from mobile phones and other recording devices by witnesses in Russia and Ukraine in the days leading up to the plane’s downing.

The 53rd Anti-Aircraft Missile Brigade is based near the Russian city of Kursk. The JIT news conference provided location evidence allegedly showing a convoy of almost 50 vehicles, including six TELARs, make its way from Kursk to eastern Ukraine via the Russian towns of Stary Oskol, Alexeyevka, Rossosh and Millerovo between June 23 and 25, 2014.

The last of these towns, Millerovo, is approximately 270 miles from Kursk but a mere 16 miles from the Ukrainian border. Some of the location evidence presented at Thursday’s media conference had previously been disclosed, most notably by open-source investigation group Bellingcat.

The JIT also displayed part of the 9M38 missile apparently used to down MH17 at the media conference, which shows markings identifying that the missile was manufactured in 1986 along with the serial number 9032 for the missile’s rocket motor. Other numbers and Cyrillic letters, written by hand on the missile parts, were also shown, with the JIT’s Australian representative, Jennifer Hurst, calling for potential witnesses to provide more information on these.

Fred Westerbeke, chief prosecutor with the Dutch government’s prosecutor’s office, also said the JIT has more evidence proving its claims, noting that the evidence it holds is of a high standard that can be used in court for potential prosecutions in the future, although he declined to reveal more, as he did not want to “show their cards” to potential suspects.

Nevertheless, the JIT has also called for more witnesses, either from the 53rd Anti-Aircraft Missile Brigade or those with more evidence, to come forward. The team has offered witness protection. In particular, the JIT is keen to identity those who issued the orders and are responsible for the operational deployment of the unit during the period under review.

Flight MH17 was flying at more than 30,000 feel while en route from Amsterdam in the Netherlands to Malaysia’s capital Kuala Lumpur when it was shot down. The JIT had previously determined that the Buk missile that destroyed the Boeing 777-200 airliner was fired from a location held by Russian-backed militants, although it has not said the missile system was supplied by Russia until Thursday’s media conference.

Russia has always denied responsibility for the aircraft’s downing, previously suggesting a Ukrainian ground-attack jet or a Ukrainian Buk as likely suspects, although such alternative theories have since been ruled out. Russia had also previously vetoed a United Nations resolution calling for an international tribunal into the case.