By Agence France-Presse
People run after hearing what is believed to be explosions or gun shots near Place de la Republique square in Paris on November 13, 2015. At least 18 people were killed in several shootings and explosions in Paris today, police said. AFP PHOTO / DOMINIQUE FAGET (Photo credit should read DOMINIQUE FAGET/AFP/Getty Images) 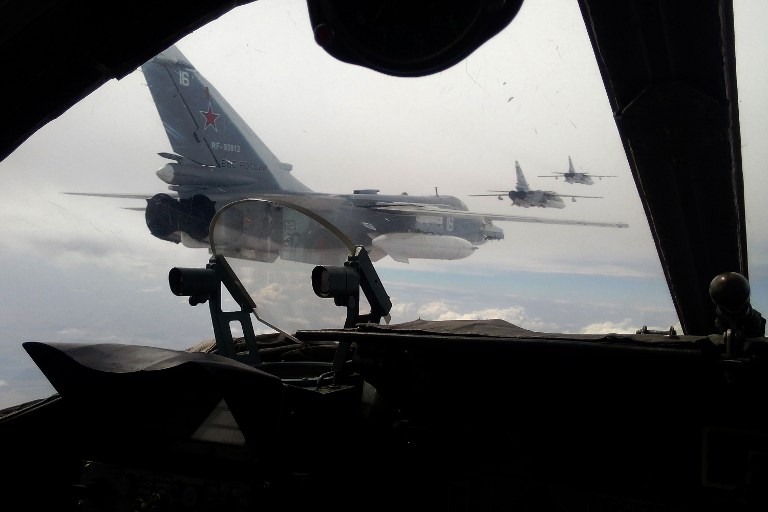 WASHINGTON — The US military released a video Monday of a Russian Su-24 bomber flying past an American warship in the Black Sea to dispel what it called inaccurate media reports about a routine encounter.

In the video, a Su-24 aircraft appears in the distance, then zooms by the USS Ross — a guided-missile destroyer.

Other Russian bombers also flew within sight of the ship, officials said.

Such footage is rarely released publicly but the US Navy decided to post it "because we were unsatisfied with the press reporting, and we wanted to show exactly what happened," Pentagon spokesman Col. Steven Warren told reporters.

None of the Russian aircraft that flew by the ship were armed and neither side took any aggressive action, Warren said.

"This was simply a ship and a plane passing in the day in this case," he said.

Some Russian media had suggested that the aircraft forced the American destroyer to shift course away from Russian territorial waters off the coast of Crimea.

But the Pentagon said those reports were "erroneous" and "didn't reflect the facts."

A Tug boat guides the guided-missile destroyer USS Ross (DDG 71) to the pier on Dec. 10, 2010, as the ship returns to Naval Station Norfolk, Va.

The USS Ross was in international waters and "never changed course, never deviated from its mission," he said.

And there was no communication between the Russian planes and the US vessel.

The Russian aircraft got to within about 1,600 feet (500 meters) from the ship while flying at an altitude of about 600 feet, officials said.

With tensions rising over Moscow's armed intervention in Ukraine over the past year, Russia has stepped up flights of its bomber fleet, particularly over the airspace of NATO states.

Smart Shooter is headed to France and Spain to pitch its fire control systems to governments interested in counter-drone technology and bolstering their homeland security forces.

US, Georgia sign military training pact amid Russian threat on the Black Sea

US Defense Secretary Lloyd Austin is visiting Georgia, Ukraine and Romania to show support in the face of Russian military activity before he attends NATO’s defense ministerial meeting.

Key’s promotion to First Sea Lord and Chief of the Naval Staff will see him move into the gap left by Adm. Sir Tony Radakin who is stepping up to become the Chief of the Defence Staff at the end of November.

Post-Afghanistan, the US Army wants to carve out its role in the Pacific

With the U.S. military out of Afghanistan and operations in the Middle East no longer competing for resources and attention, the Army must chart its path in a great power conflict, and do so after decades of struggling to push modernization programs across the finish line.

The European Union wants to build its own microchip manufacturing capability to counterbalance the dominant Asian market and ensure enduring technological sovereignty.

Money Minute - How to Spot and Avoid Scam Text Messages

Gen. McConville: The Army, Industry, and The Next Steps in Modernization