But no slowdown in demand for combat search and rescue

KADENA AIR BASE, Japan — The HH-60G Pave Hawk helicopter is showing its age. Specifically, at Kadena Air Base in Okinawa, Japan, the aircraft are experiencing structural cracks and frequent maintenance issues that hamstring the fleet.

But that doesn’t stop the airmen of 33rd Rescue Squadron from doing their jobs, which regularly includes deploying from Japan to the Middle East — including to aid casualty evacuation operations in Afghanistan or conduct combat rescue missions in Iraq — or to other regions worldwide.

While other squadrons at Kadena prepare for the possibility of war, the members of the 33rd frequently find themselves in it.

“Half of our unit is actually deployed right now. About half of them in Afghanistan” Capt. Chris Allen, an HH-60G pilot and flight commander, said in a Feb. 13 interview.

“Our guys have been in and out of Afghanistan for years now,” he said. “Last year I came back from AFRICOM [U.S. Africa Command].”

The squadron operates nine HH-60Gs, a variant of the ubiquitous Black Hawk sold by Sikorsky, which is now owned by Lockheed Martin. At any given time, one of those aircraft is usually going through depot or phased maintenance, Allen said. The rest of the squadron is split into two unit type codes, or UTC, one of which is always ready to deploy from Kadena or temporarily operating somewhere around the globe.

Through all of this, the Pave Hawk is advancing in age. The oldest of the 33rd’s HH-60Gs were manufactured in the late 1980s. All of them are either approaching their 7,000-hour lifespan or have exceeded it, Allen said.

The result is an overworked fleet of aircraft that is literally coming apart at the seams.

“Over the past few years, we’ve started to see airframe structural cracks,” Allen said. “Usually what that entails is we find it, it goes to maintenance, maintenance sends back to their headquarters for approval to basically stiffen that area, put in bracing and all that, and then it comes back to us. And then we see the crack either go somewhere else or progress, or whatever. So that’s something we’re constantly fighting these days.”

However, that doesn’t keep the squadron from putting the aircraft to work. The HH-60G is frequently flown with heavier payloads than it was designed to handle. And it operates in the Middle East, where the environment can come with higher altitudes and temperatures than the helicopter was designed to handle.

Capt. Chris Allen, a flight commander in the 33rd Rescue Squadron, dons his helmet in an HH-60G before takeoff. (Jeff Martin/Staff)
2 of 10 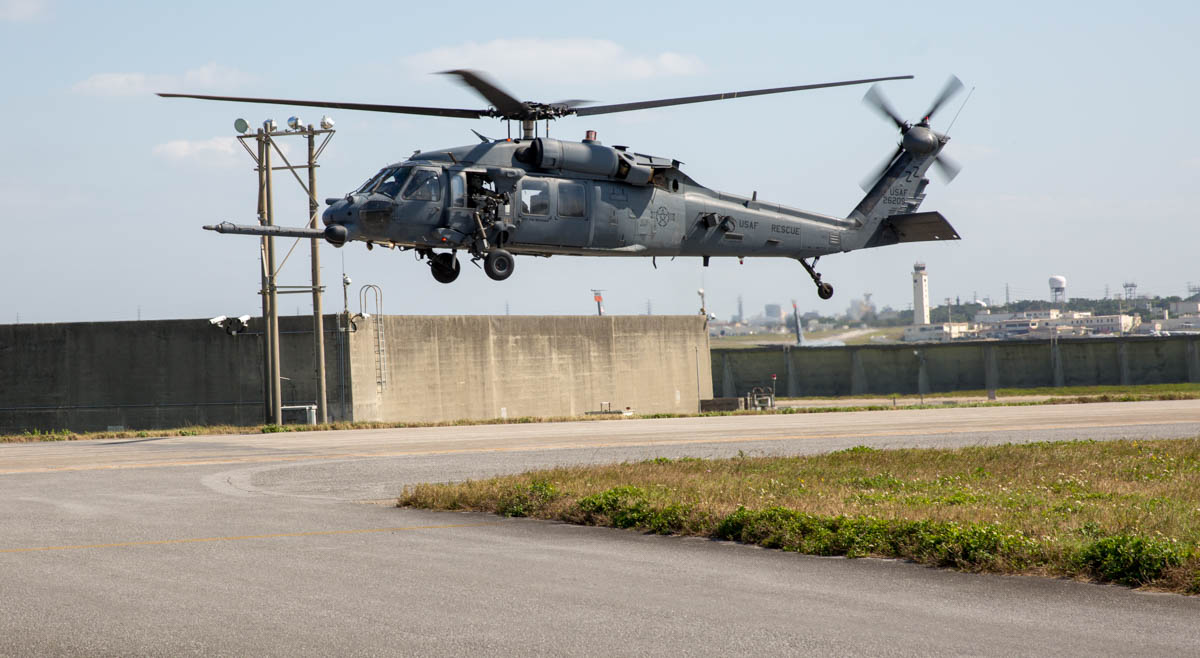 An HH-60G from the 33rd Rescue Squadron lifts off from Kadena Air Base on Okinawa. (Jeff Martin/Staff)
3 of 10 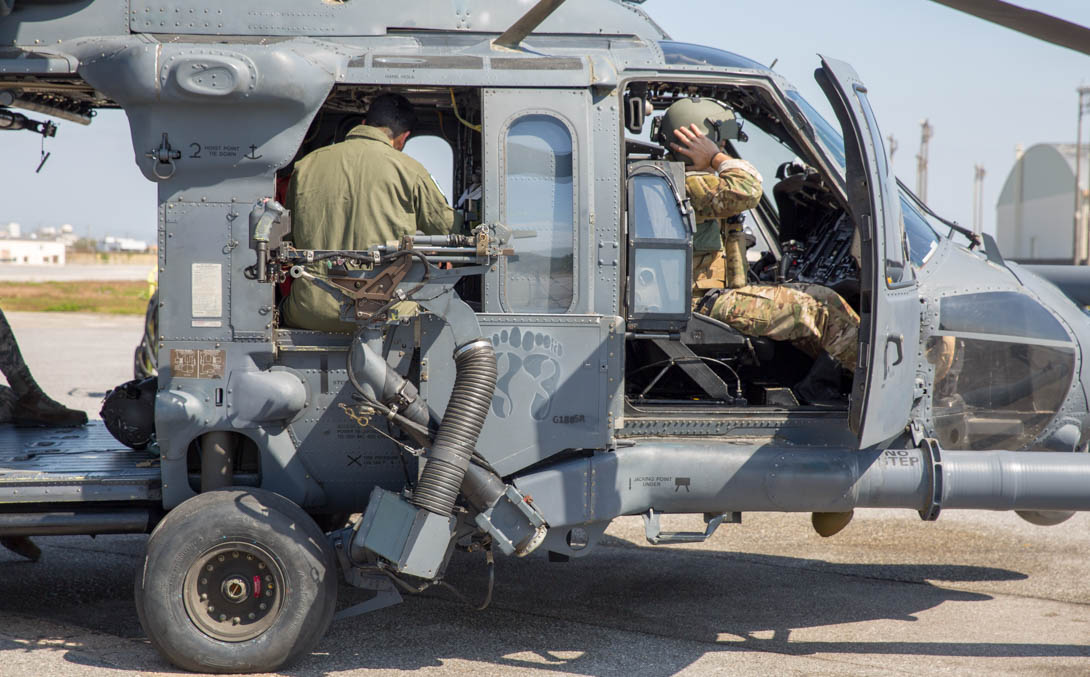 A side view of a 33rd Rescue Squadron HH-60G as it is prepped for takeoff on a training flight. (Jeff Martin/Staff)
4 of 10 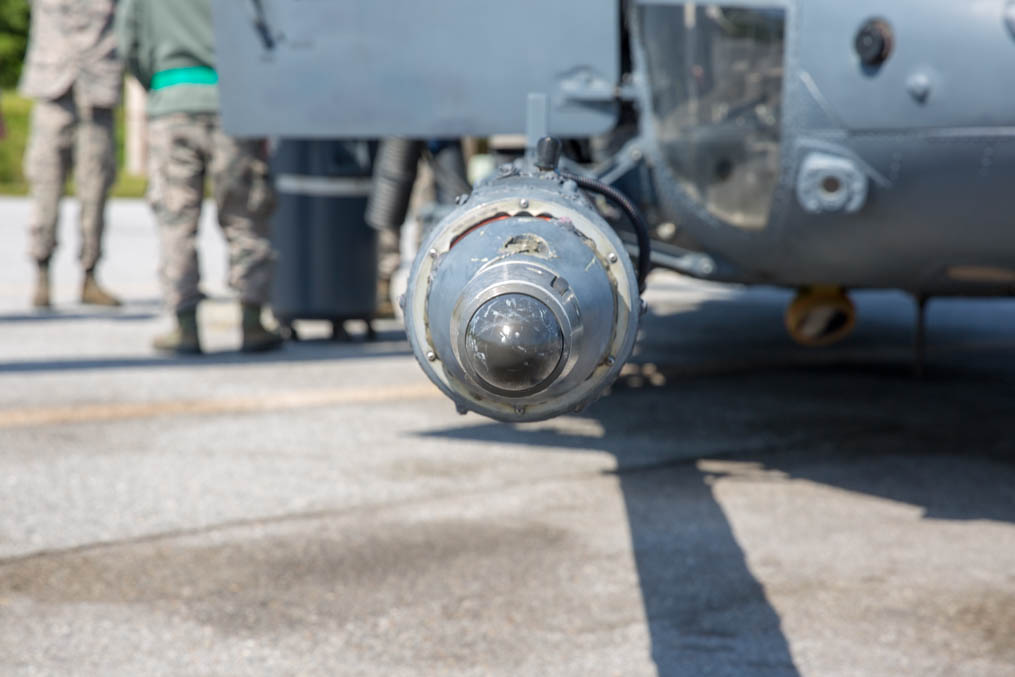 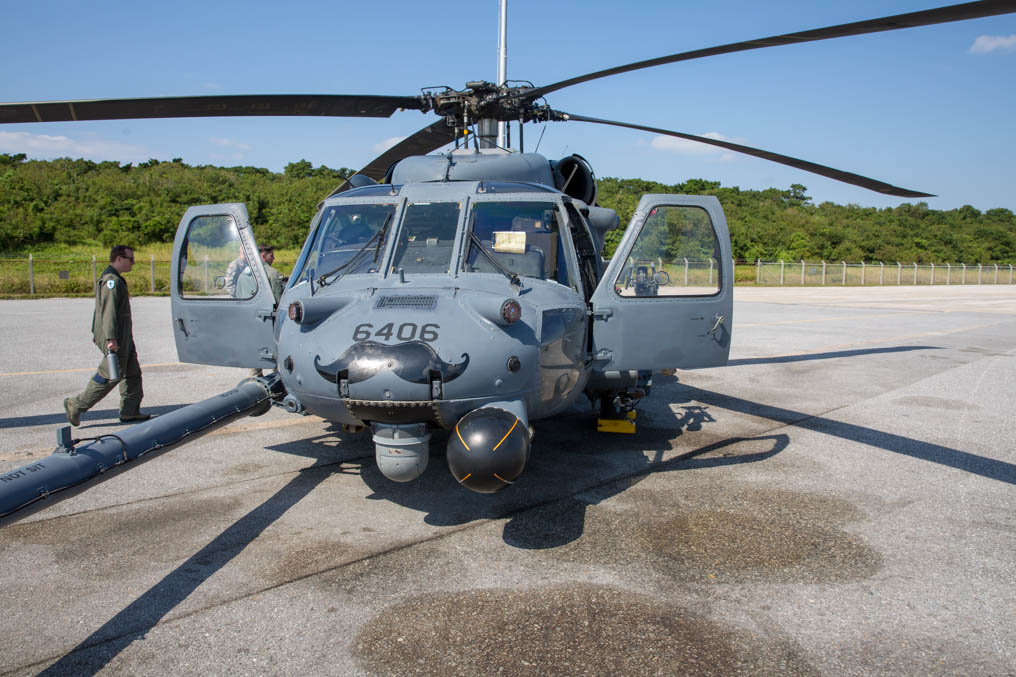 An HH-60G of the 33rd Rescue Squadron on Kadena Air Base, Japan, is prepped for takeoff. (Jeff Martin/Staff)
6 of 10 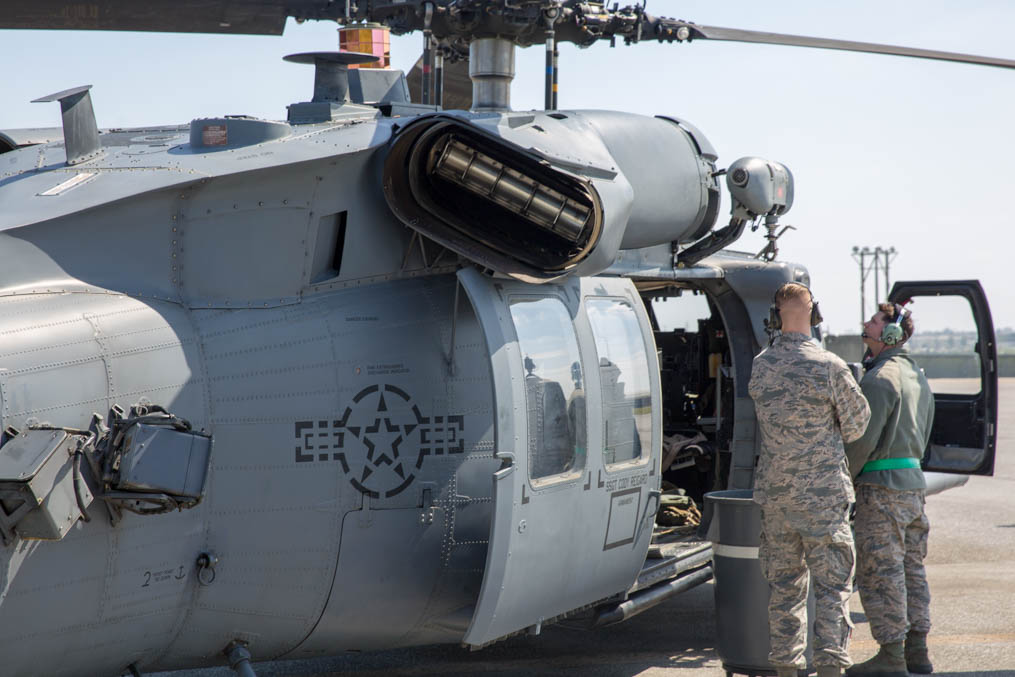 Two maintainers inspect an HH-60G of the 33rd Rescue Squadron on Kadena Air Base. (Jeff Martin/Staff)
7 of 10 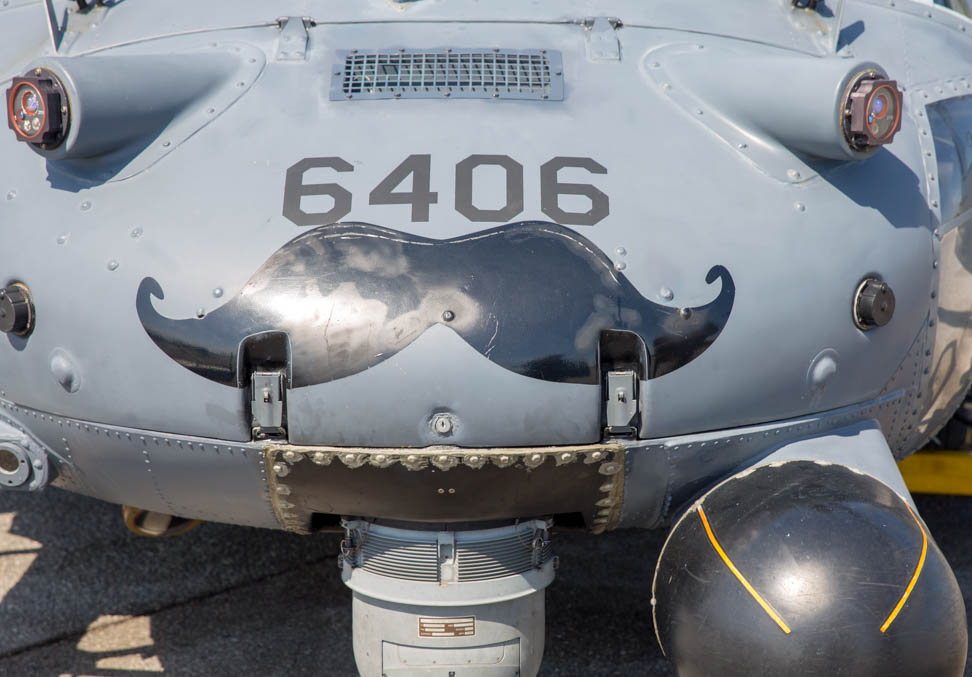 A mustache is painted on an HH-60G of the 33rd Rescue Squadron at Kadena Air Base, Japan. It pays homage to the squadron's "Pedro" call sign while deployed to Afghanistan. (Jeff Martin/Staff)
8 of 10 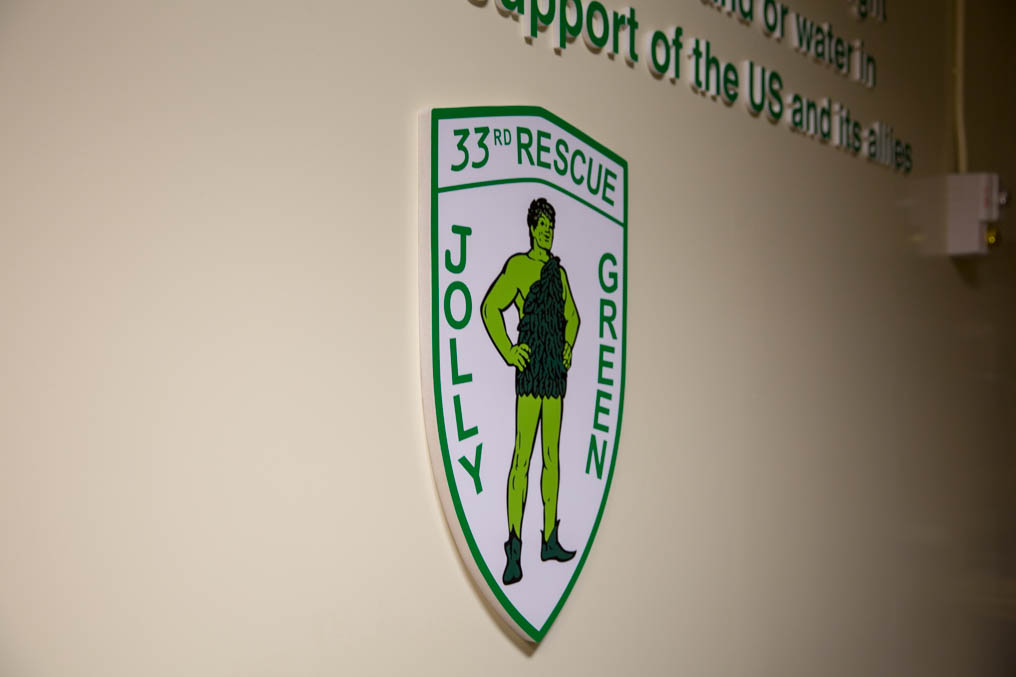 The patch of the 33rd Rescue Squadron, part of the 18th Wing on Kadena Air Base. (Jeff Martin/Staff)
9 of 10 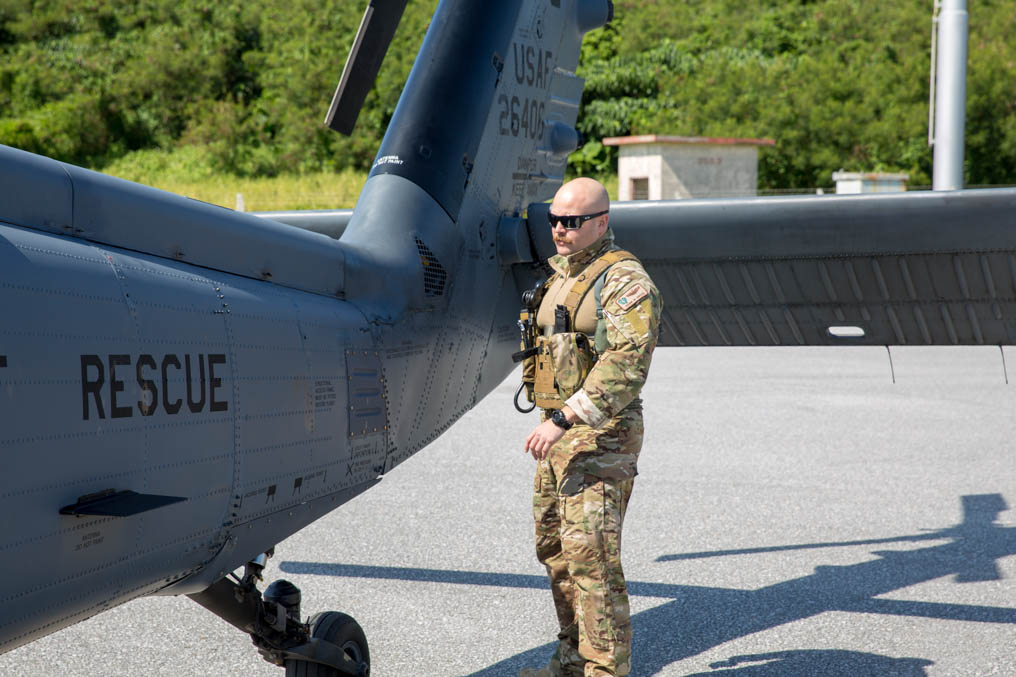 A pilot from the 33rd Rescue Squadron performs a preflight inspection of his HH-60G on Kadena Air Base. (Jeff Martin/Staff)
10 of 10

An HH-60G of the 33rd Rescue Squadron takes off from Kadena Air Base, Japan. (Jeff Martin/Staff)

All of those mission requirements increase the load of maintainers, Allen said.

Even at home station, the squadron flies twice a day, about four days a week, with at least one complex training scenario — usually staged at nighttime. The scenario could involve picking up a wounded operator with a radio, with red forces deployed as aggressors.

“For what they are, as old as they are, our maintenance guys have to work pretty hard. But they fly well once we get them up and going,” Allen said.

The combat rescue helicopter program appears to be proceeding at pace, but the competitions leading up to the selection of the HH-60W were famously troubled. Under the combat search and rescue-X, or CSAR-X, program, the Air Force in 2006 selected a variant of Boeing’s CH-47 Chinook helicopter but canceled the program after multiple protests.

It then scaled back its requirements and restarted the HH-60G replacement effort as the combat rescue helicopter competition.

The HH-60G’s current predicament illustrates why it is critical for the military to acquire and field new technologies in a timely manner. Pushing new procurement programs too far into the future can hinder a critical mission — a fact not lost on the airmen flying the Pave Hawk today.

“CSAR-X happened, what is it, 10 years ago? We needed a new helicopter then,” Allen stressed, “because our birds are so old.”

It will be “years, at least” until active-duty units like the 33rd start getting the new HH-60Ws, he added.

Despite the structural issues plaguing the HH-60G inventory, Allen stressed safety comes first, especially in a training environment. When there seems to be an issue with one of the Pave Hawks, the crew will either hop to another helicopter or not fly that training mission.

“We make a lot of decisions not to fly helicopters purely based on precaution. So it’s things like: Would we in a real life — if there’s someone actually floating out there we need to go pick up or a pilot just got shot down — would we fly that helicopter? Absolutely,” he said. “But a lot of times here, we make the conservative choice and say: ‘We’ll just give it back to maintenance and let them fix it.’ ”

Moving injured troops from the ground or sea into a helicopter to receive medical attention is a team effort. Typically, an HH-60G crew includes two pilots and two special mission aviators, who are responsible for flight engineer duties and operating the .50-caliber GAU-18 gun and GAU-2 minigun. It can also be augmented by two to three pararescue jumpers from the 31st Rescue Squadron, all of which are qualified combat medics.

If a UTC stays at Kadena or is deployed to a place like Africa, it will likely be regulated to flying training missions to keep its skills sharp; or, very rarely, it will conduct an actual rescue mission of a downed pilot.

That all changes when a Pave Hawk squadron is sent to a place like Afghanistan, where an HH-60G will always be operating nearby other aircraft carrying out combat missions.

“If there’s a lot of activity, like a lot of dudes are getting shot or hit with [improvised explosive devices], our pace, our tempo rapidly increases. But it truly depends on where we’re at, and what we’re tasked to do because if we’re not tasked to do [casualty evacuation], then most likely, we’re not doing a whole lot [more] than flying training lines,” said Master Sgt. Joshua Reid, a special missions aviator.

Evacuating troops in a warzone requires quick thinking and cooperation with other U.S. assets in the air. The first task for the Pave Hawk crew is figuring out the precise location of the operator needing help, which could entail talking to his or her wingman, using data from surveillance aircraft like the MQ-9 Reaper, or contacting him or her directly using radios. Then, the HH-60G crew will call in other aircraft, which can help protect the operator on the ground.

“Depending on where he goes down, if he goes down in OIR [Operation Inherent Resolve] if he’s in ISIS-controlled territory [in Iraq or Syria], then it becomes: Let’s coordinate with anyone we have available, whether it be the guys he was with that have bombs or A-10s that were 100 miles away doing whatever,” Allen said.

“It gets really busy, but that’s the beauty of the crew and the helicopter. We always have one guy flying…but that other pilot is there to mission manage. Additionally there’s the guys in the back, those [special mission aviators],” he said. “They’ll have notes in grease pen scribbled all the way down the window. […] Anytime new information comes through, they copy it down.”

While the 33rd is fully manned on the pilot side, it’s dealing with a shortfall of special mission aviators like Reid, who says he could fly two to three times a day even at home station.

“We’re not critical, we’re not going to fail at our mission set, but we can definitely use a few extra bodies,” he said. “This job takes a toll on people, sitting in the back of the helicopter—even in the front, I’m not saying pilots don’t have it rough — but sitting in the aircraft, people’s knees get hurt, people’s necks and backs start hurting.

“In the earlier days of constantly being gone, I knew dudes who were on rotation for four months home, four months on the road, if not longer. But the constant rotation of deployments and exercises take away from people’s lives and families and stuff, so a lot of people get out over time. They don’t make it a career.”