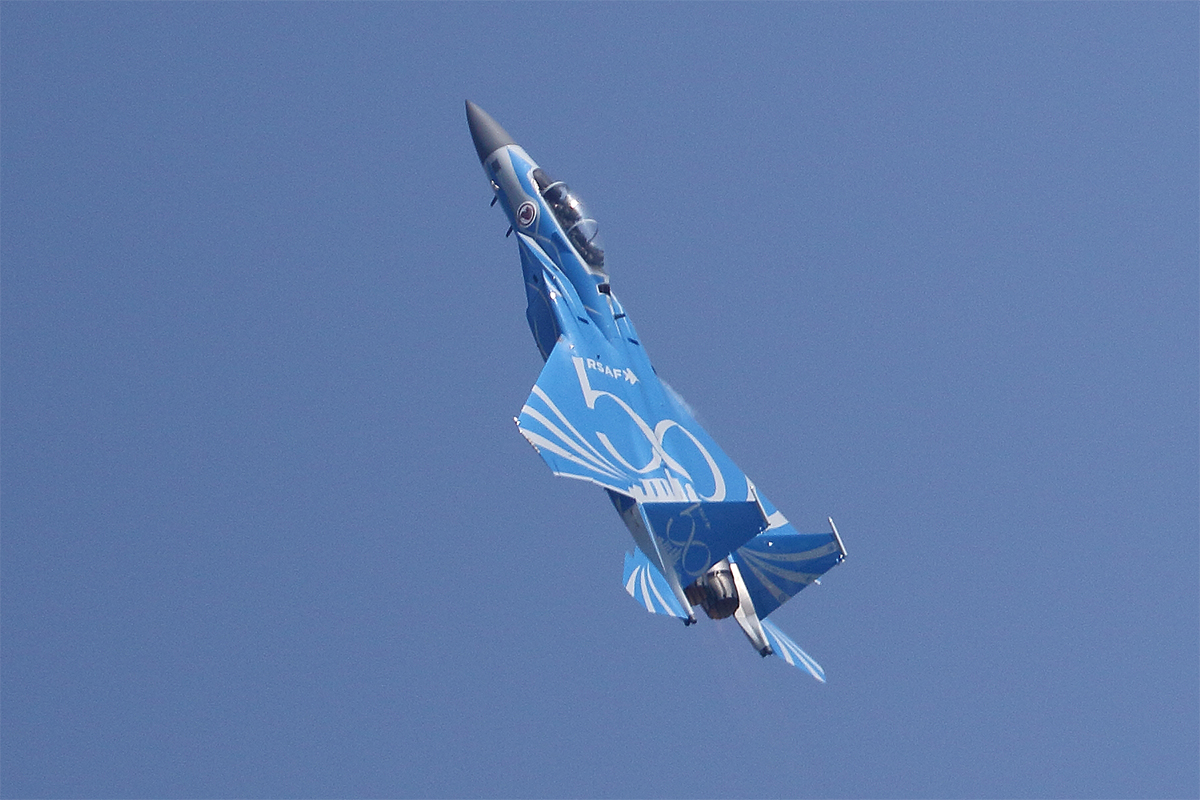 The Republic of Singapore Air Force unveiled a special 50th anniversary livery on two of its Boeing F-15SGs during the Singapore Airshow. (Mike Yeo/Staff)
2 of 11 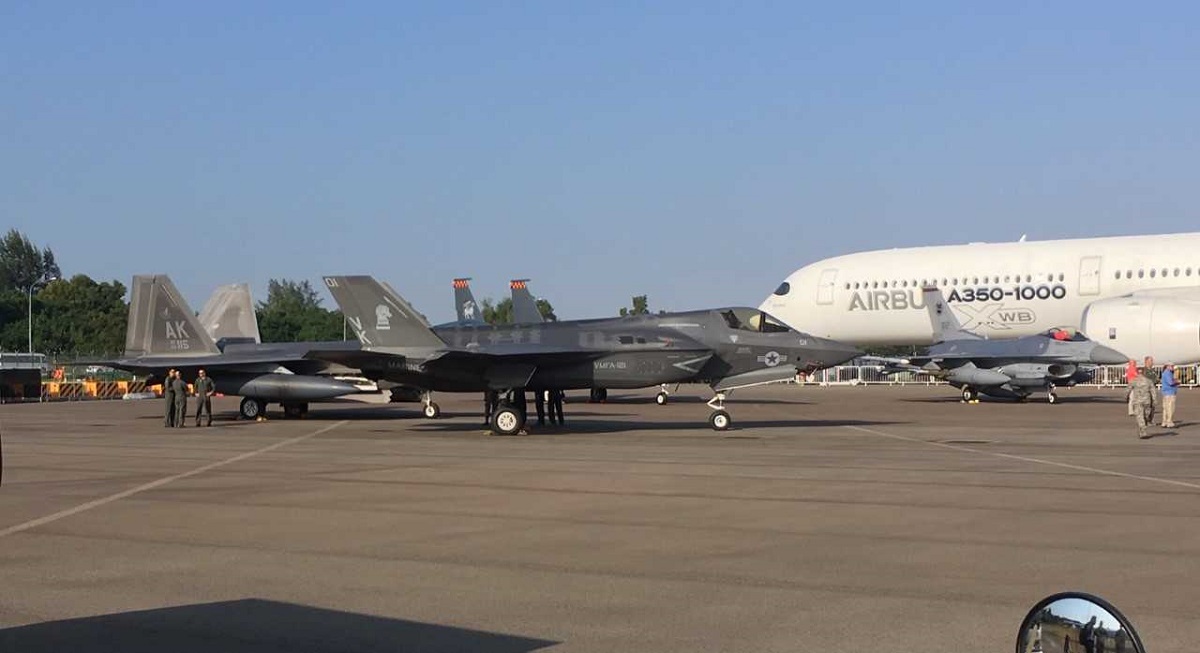 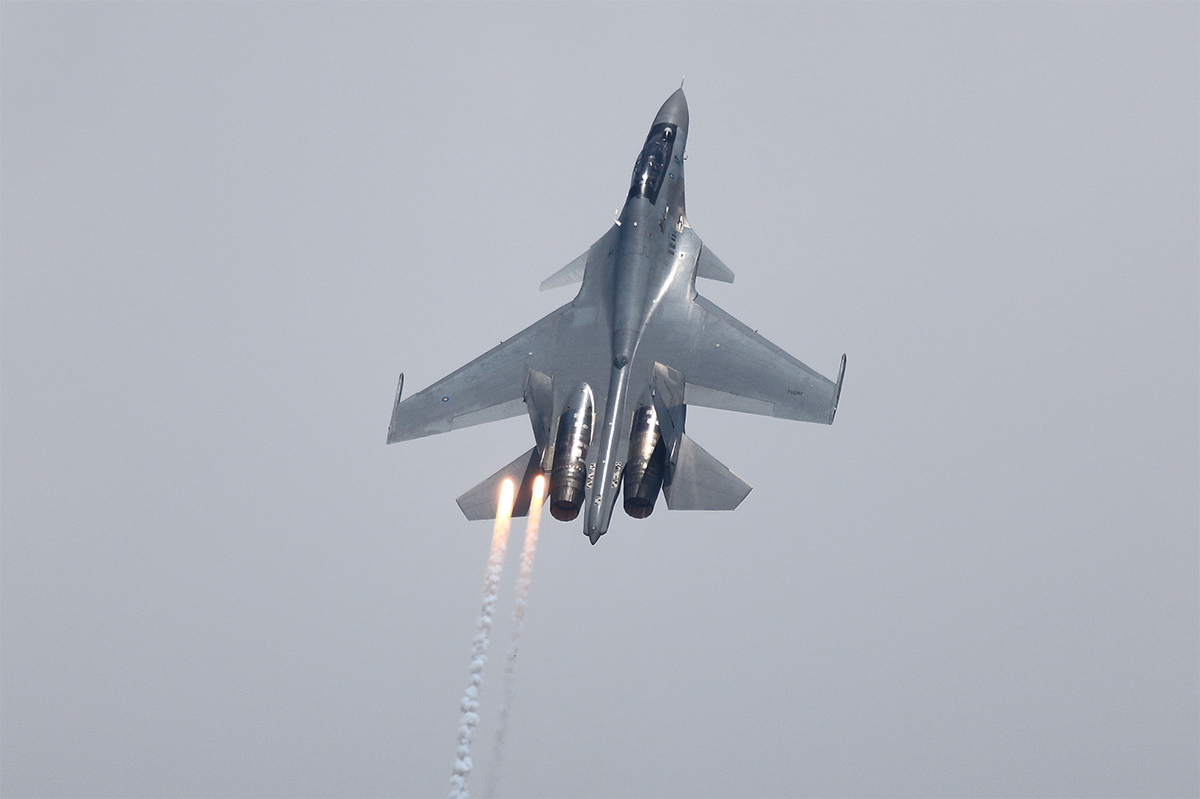 The Sukhoi Su-30MKM Flanker display by the Royal Malaysian Air Force emphasized its ability to perform at slow speeds and its liberal use of flares. (Mike Yeo/Staff)
4 of 11 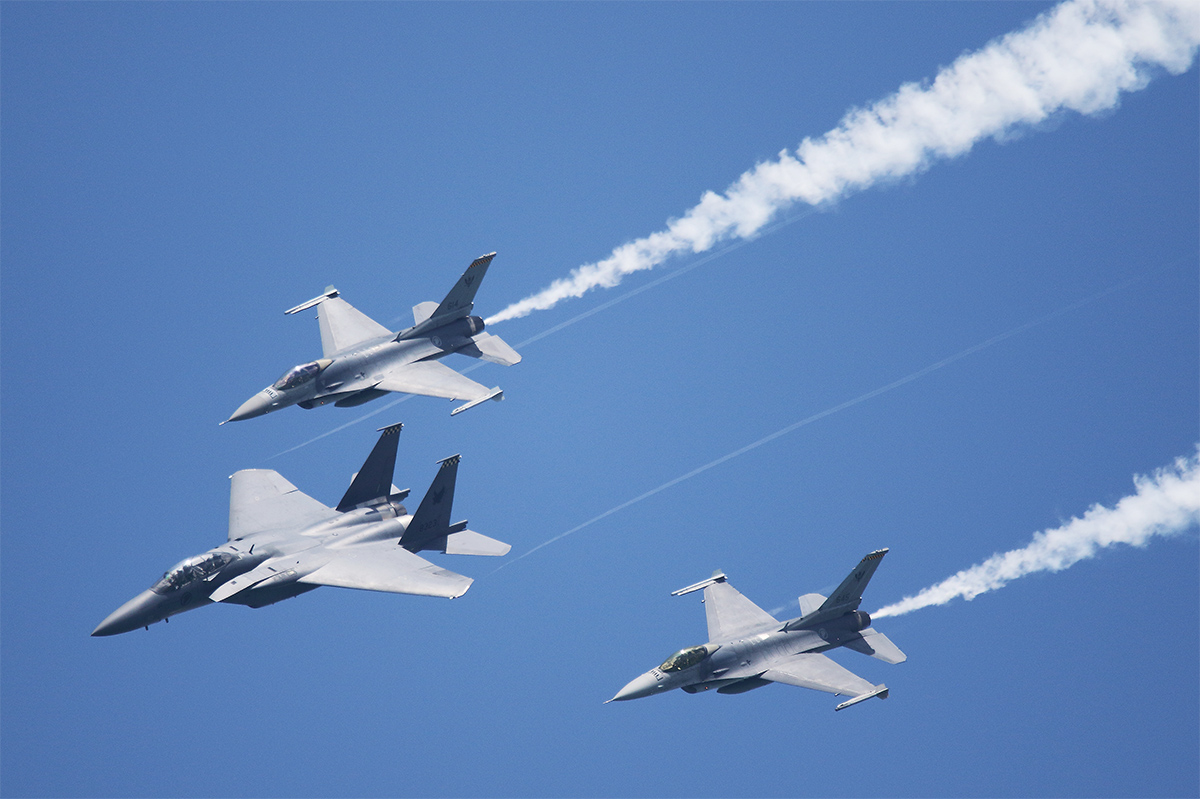 The Republic of Singapore Air Force performed a daily display routine with a Boeing F-15SG and two Lockheed Martin F-16s. (Mike Yeo/Staff)
5 of 11 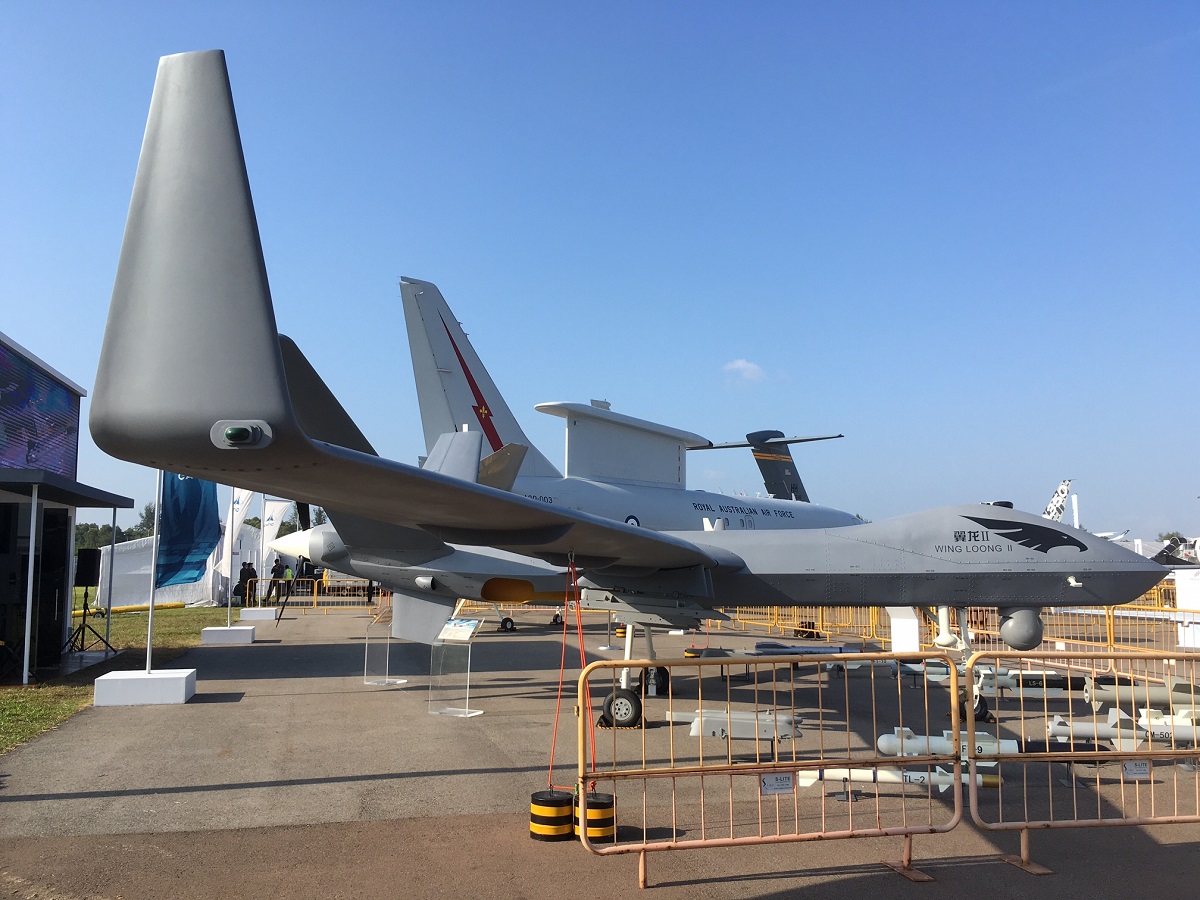 The Wing Loong II drone, by the Chengdu Aircraft Industry Group, was on static display at the 2018 Singapore Airshow — a first for the type of platform at the event. (Mike Yeo/Staff)
6 of 11 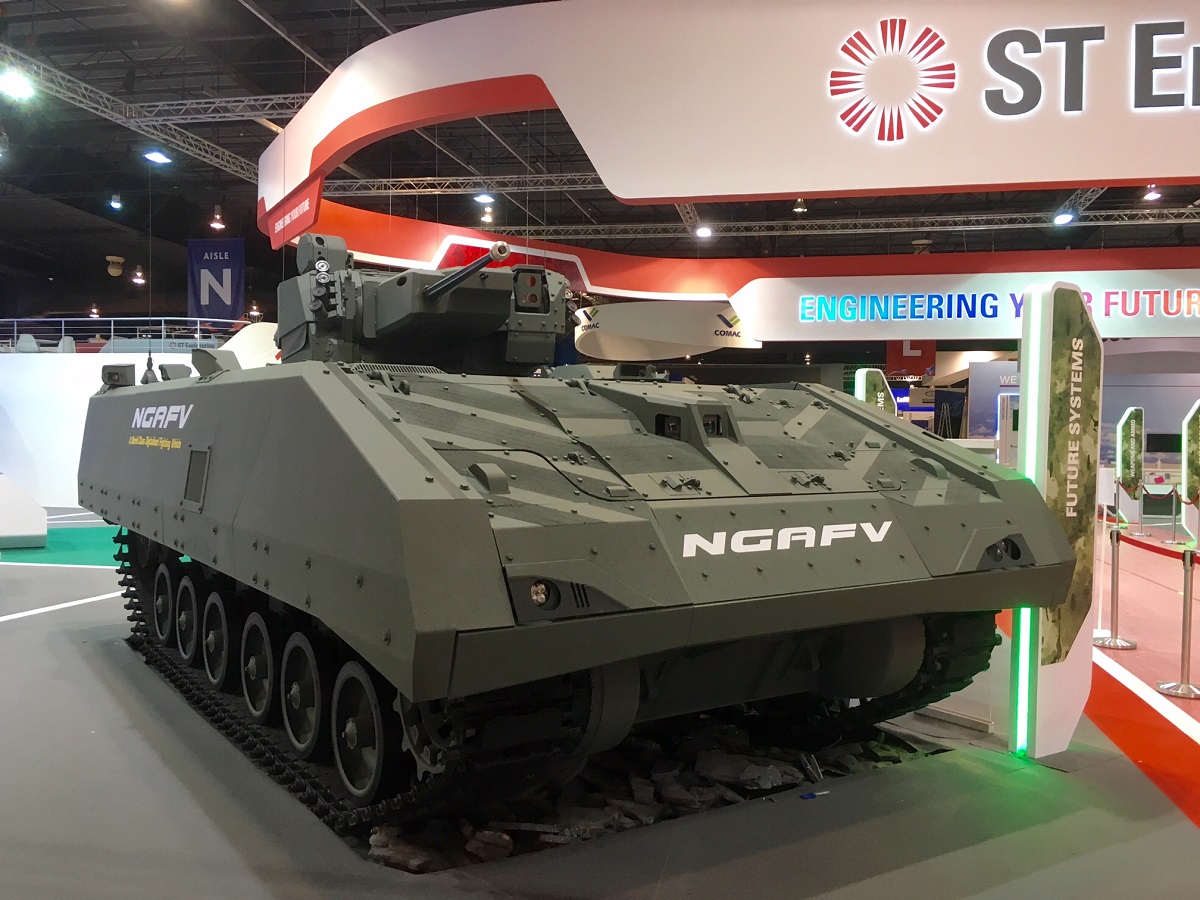 ST Kinetics displayed its next-generation armored fighting vehicle, which forms the basis of its offering for the U.S. Army's Mobile Protected Firepower program. The company is partnering with SAIC. (Mike Yeo/Staff)
7 of 11 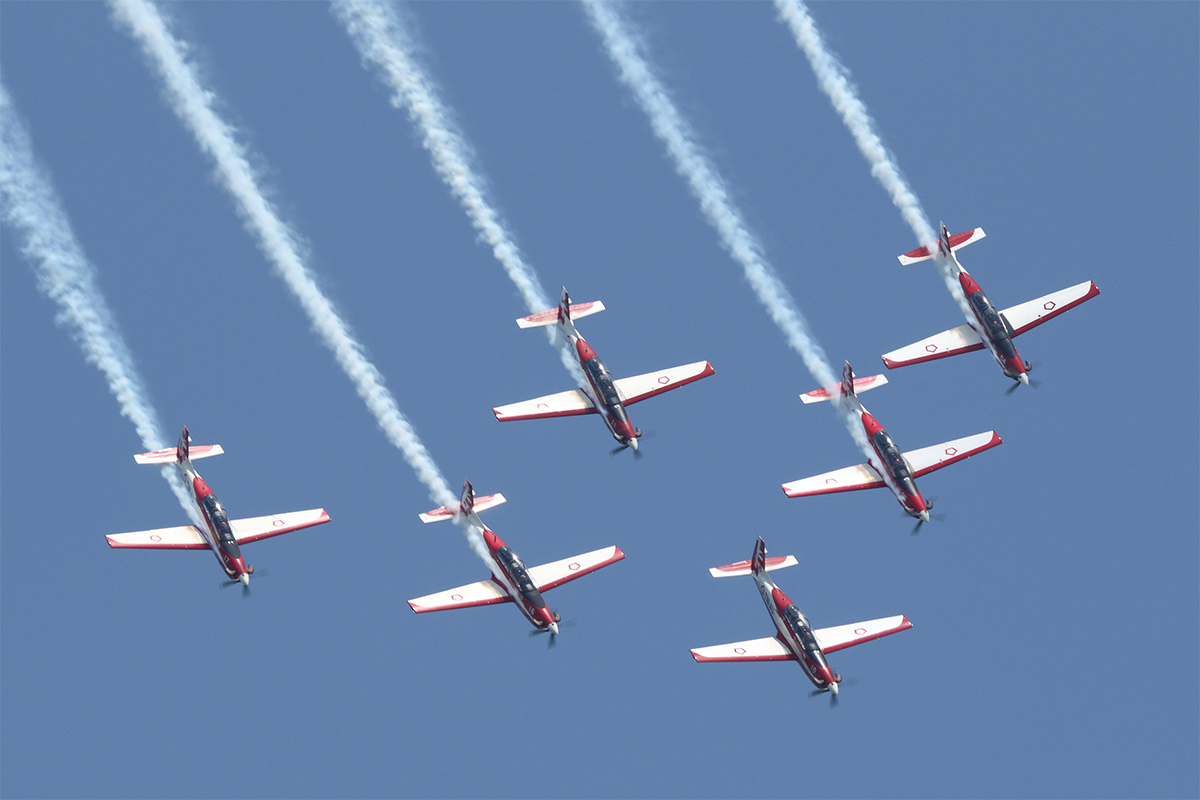 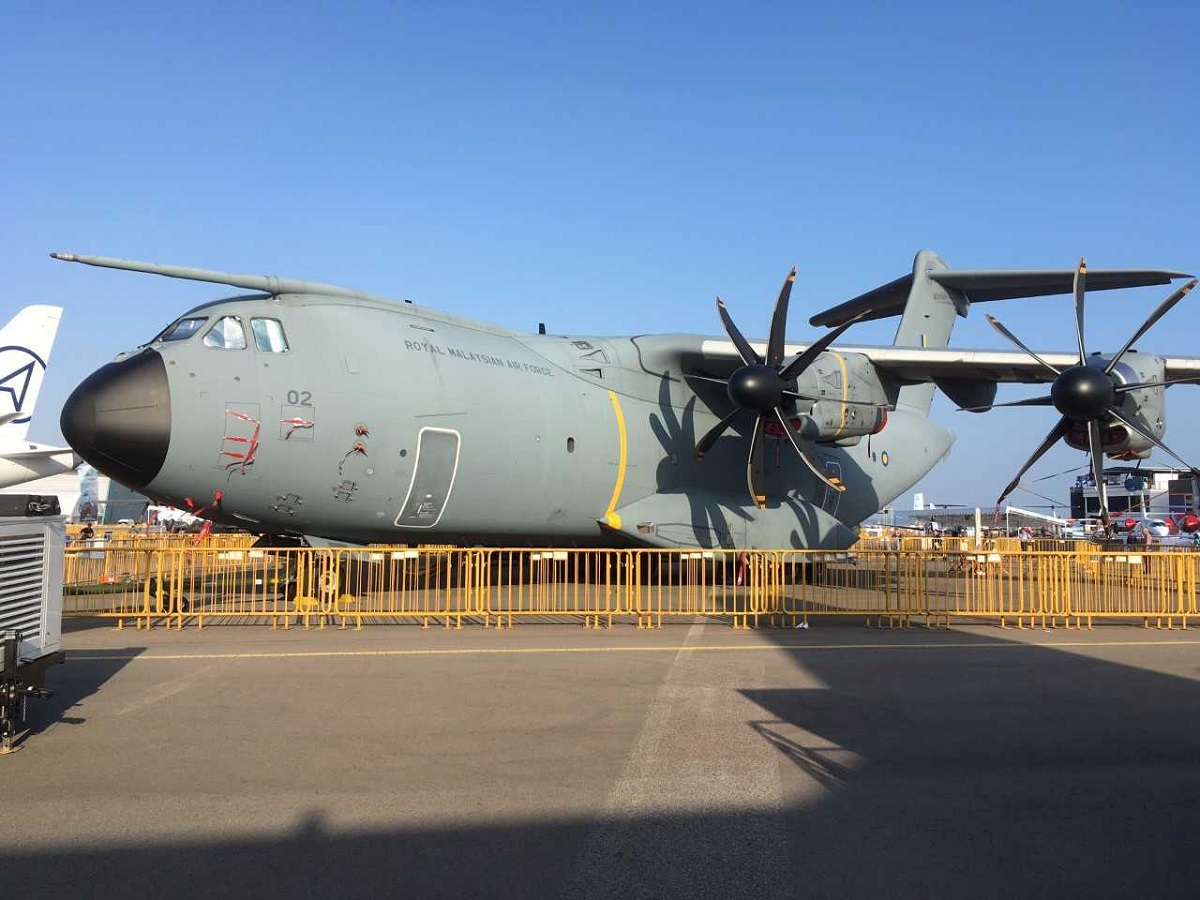 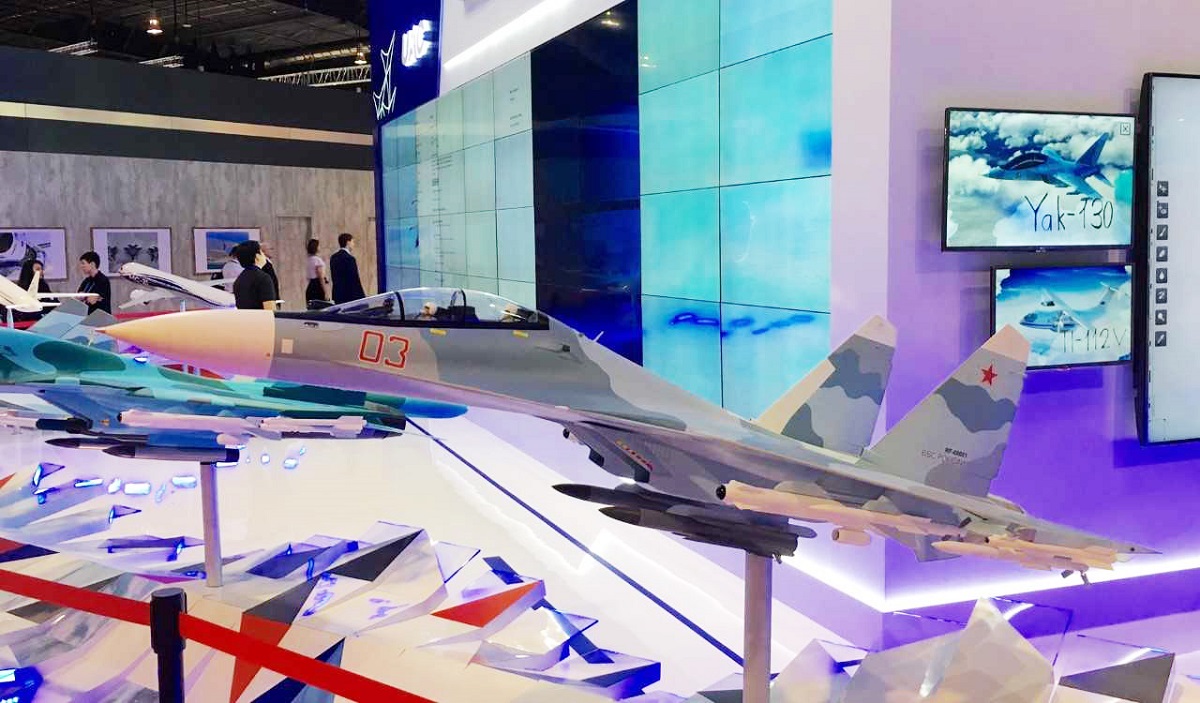 Russia had no military aircraft on display, but its United Aircraft Corporation was out in force in the exhibition halls. (Mike Yeo/Staff)
10 of 11 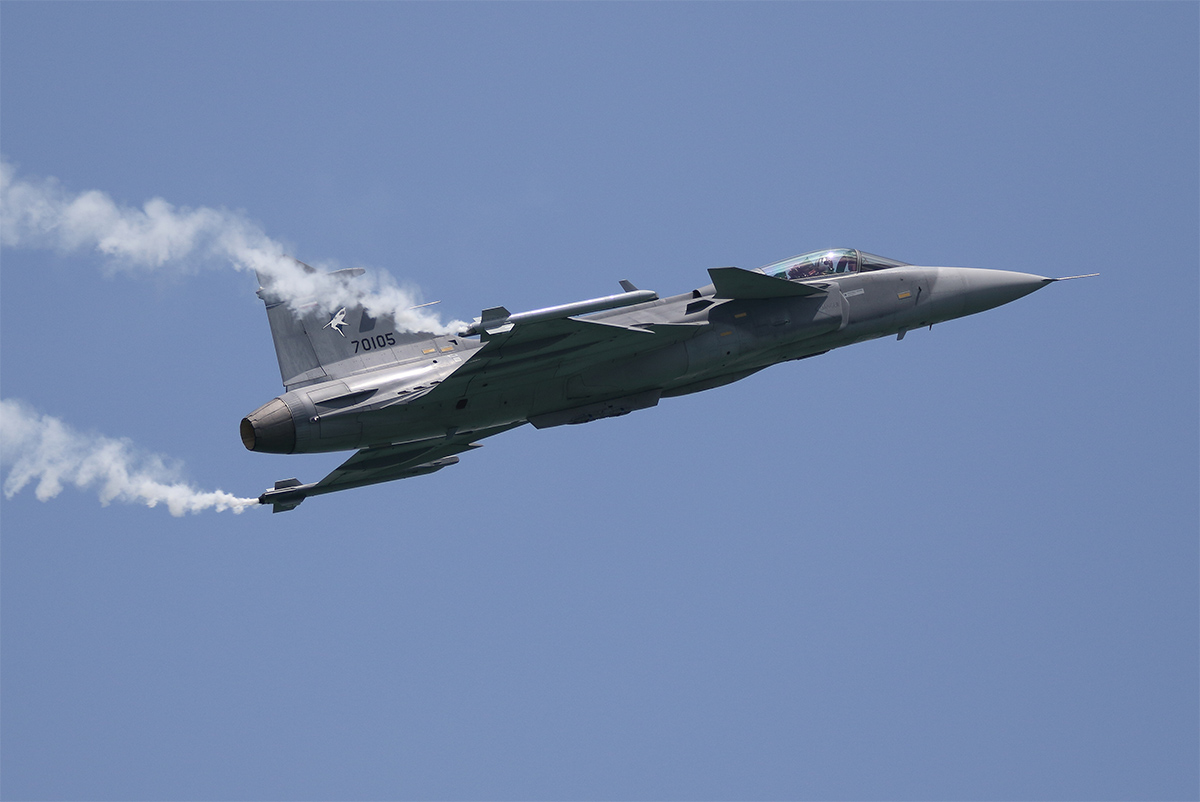 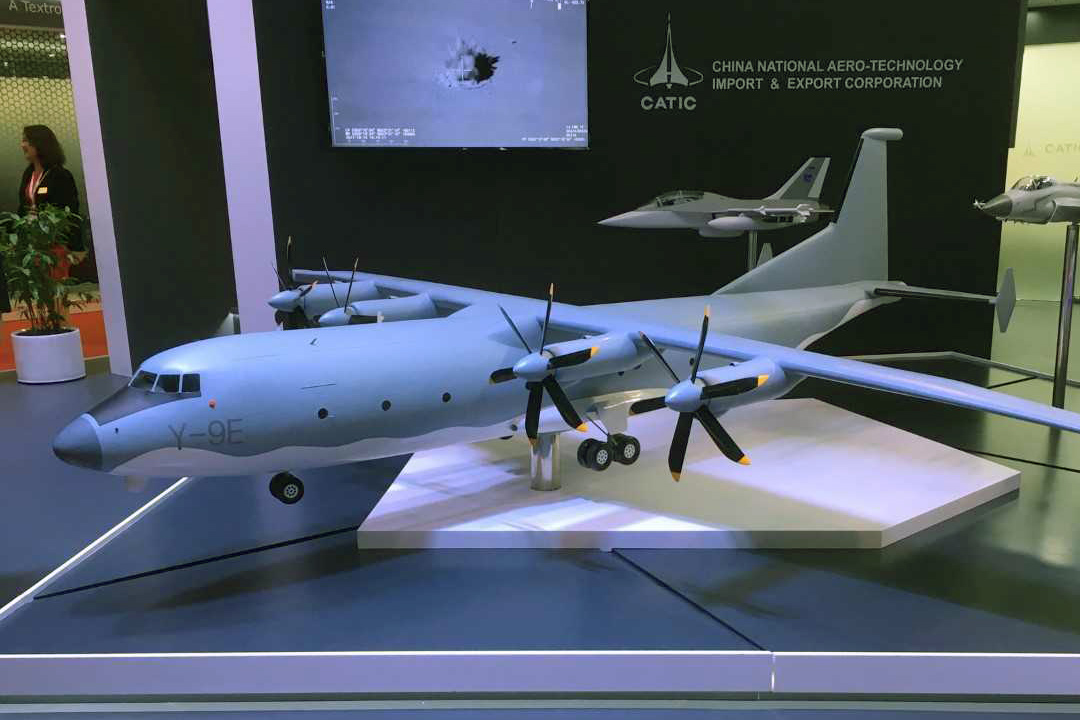 A model of the Shaanxi Y-9E airlifter was shown off by China National Aero-Technology Import & Export Corporation. The type has recently seen a dramatic ramp-up in production. (Mike Yeo/Staff)

The Singapore Airshow is important to the world’s fighter manufacturers for one very simple reason: Asia takes 24 percent of the world’s combat aircraft exports by value. That makes it the second-largest export fighter market in the world, after the Middle East.

Over the past 10 years, a total of 561 jets worth $39.1 billion in 2018 dollars were exported by the world’s fighter manufacturers, excluding Russian and Chinese designs. Of these, 128 aircraft worth $9.2 billion went to Asian countries, including Australia.

The Asian fighter market is also growing at a strong pace; the region’s fighter order backlog is considerably larger than the historical market. Almost 200 Lockheed Martin F-35s are on order for Australia, Japan and South Korea, with Singapore likely to join the F-35 club in the next 10 years. More Korea Aerospace Industries T-50/FA-50s are on the way for Thailand, with more likely for the Philippines.

Meanwhile, the ability of Asian countries to pay for new jets has served as a market catalyst. Most of the region has enjoyed strong economic growth, particularly in South Korea and Singapore. Relatively high commodity prices have bolstered government resources in emerging Asian market countries, such as Indonesia or Thailand.

Only Malaysia stands out as an exception; while the country has the resources needed for a strong military, it has let its air power capabilities badly lag. A fighter competition could begin in 2020, but there have been false starts down this road before.

Japan, South Korea, Australia and Singapore have represented the high end of the market, both in Asia and globally. Until 2015, only these countries, plus Israel and Saudi Arabia, have ever purchased an exported fighter with a unit price greater than $50 million.

Historically, that has meant operating a Boeing F-15 (or in Australia’s case, an F-111, finally retired in December 2010). The arrival of the F-35 is transforming this high-end market, and while Boeing will get considerable upgrade work, it is unlikely that it’ll sell additional current-generation fighters in the region.

One notable characteristic of the region is that U.S. manufacturers dominate the Asian export fighter market to a much greater degree than anywhere else. While Dassault and Eurofighter have done well in the Middle East, they have yet to sell any of their current-generation planes east of India. Saab has sold 12 Gripen C/Ds to Thailand, and Korea Aerospace Industries’ T-50 now has a regional presence, but Russia and China play a marginal role in Asia’s fighter market.

Indigenous programs, not counted in our export totals, have been a recurring factor in the Asia market. Japan’s Mitsubishi, leveraging previous co-production efforts, built the F-2, a major derivative of the F-16. It may go on to build a next-generation stealth fighter (although in November, this project was deferred). Since Japan now has an F-35 final assembly and checkout line, the F-35 plane may fill Japanese requirements beyond the stated 42-aircraft program of record.

Taiwan’s Aerospace Industrial Development Corporation built the Ching-kuo light fighter, but the firm is now focusing on a less ambitious trainer derivative, which is expected to be built in the 2020s.

For the future, Korea Aerospace Industries is pressing ahead with the KF-X, a medium-weight, twin-engine fighter, designed in conjunction with Indonesia. Even though South Korea is considering expanding its 40-aircraft F-35 buy with an additional 20 planes, the KF-X may go ahead, too; the country has a very large F-4/F-16 replacement requirement.

Assuming that indigenous projects will continue to play a relatively marginal role in meeting regional fighter requirements, Asia will be a growth story for Western fighter primes for many years to come.