TOKYO — The clock is ticking on Japan’s Phantom fighters as the country prepares to draw down use of the Cold War-era jet that has been in service with the U.S. ally for almost half a century.

One Japan Air Self-Defense Force squadron that is currently operating the Mitsubishi F-4EJ Phantom II is due to transition to the Lockheed Martin F-35A fighter jet in early 2019, with another squadron to follow the year after. Aircraft from a third squadron will be retired at the same time, ending what will then be Japan’s 48-year association with the type.

To mark the retirement of the Phantom with the JASDF’s 302 Squadron, an air show was held at the JASDF base at Hyakuri, Ibaraki prefecture, north of Japan’s capital Tokyo on Dec. 2. Two of the unit’s jets painted in commemorative markings took center stage. Hyakuri is home to all three of Japan’s Phantom squadrons.

In addition to the large crowd of locals who attended, the Hyakuri Air Festival also drew aviation enthusiasts from around the world, with groups from Australia, the Netherlands and the United Kingdom among the various nationalities present at the show.

Dion Makowski, who was visiting from Melbourne, Australia, told Defense News that the Phantom had been a key component of many U.S.-aligned air forces for almost 60 years. “With most air forces such as Germany having retired theirs in recent years, Japan remains one of the last and most accessible places we can see the Phantom still in service,” Makowski said.

Mitsubishi built 138 of Japan’s 140 F-4EJs under licence from aerospace company McDonnell Douglas between 1971 and 1981. They were mostly similar to the F-4Es used by the United States at that time, although the Japanese aircraft had their in-flight refueling and ground-attack capabilities removed to align with Japan’s defensive posture. 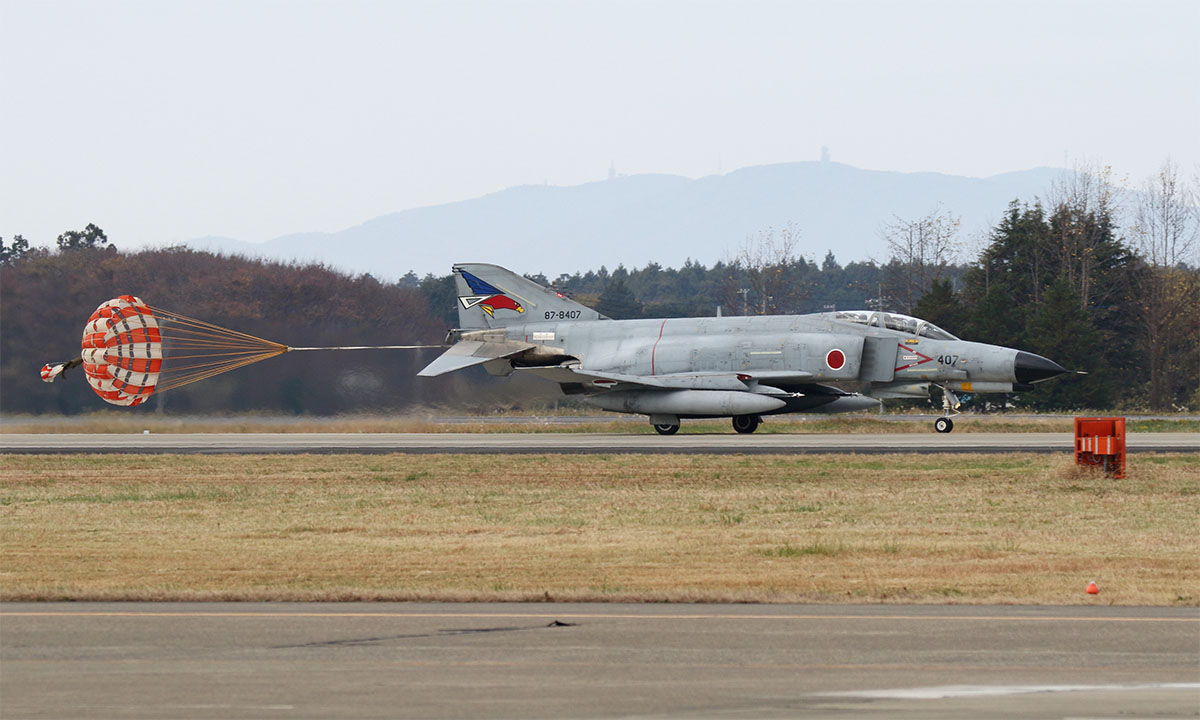 A Japan Air Self-Defense Force Mitsubishi F-4EJ Kai Phantom II of 302 Squadron lands at Hyakuri Air Base in early December 2018. The Phantoms of this squadron will soon be retired and replaced with the Lockheed Martin F-35A Lightning II Joint Strike Fighter. (Mike Yeo/Staff)
2 of 12 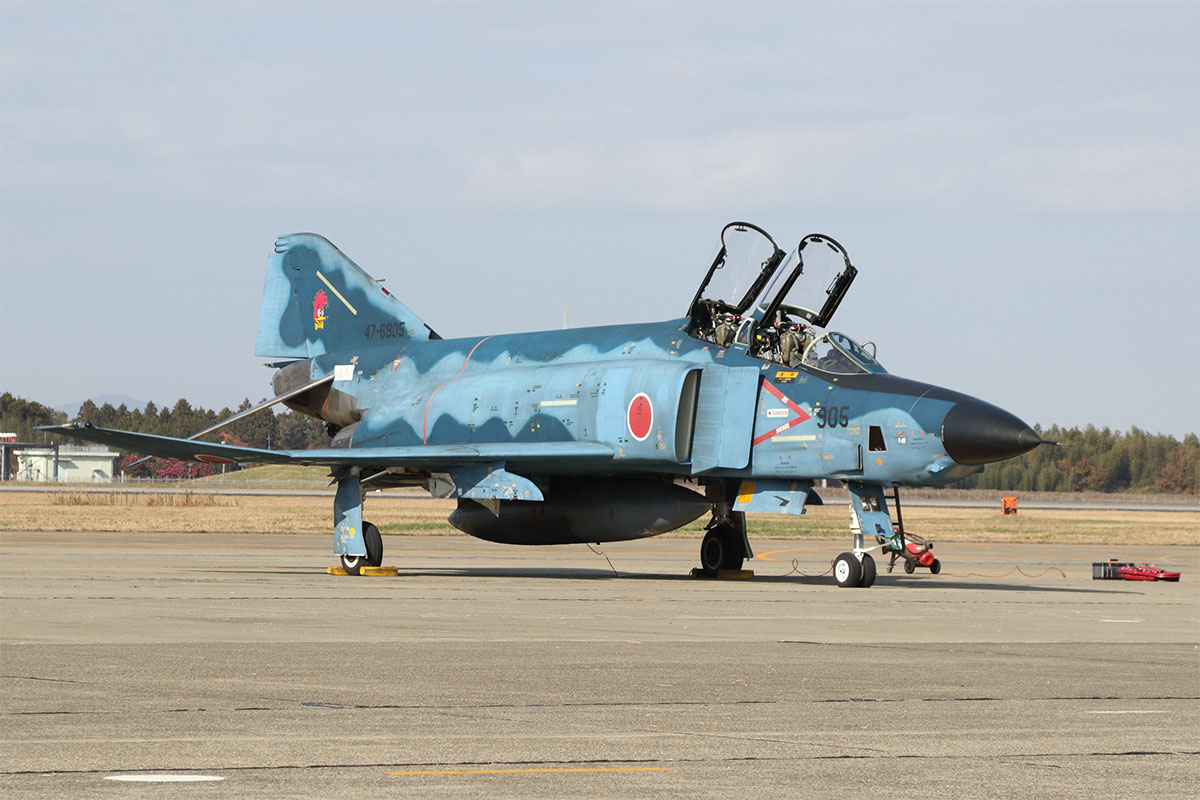 Hyakuri in Ibaraki prefecture, north of Tokyo, is home to all three squadrons of Japan’s Phantoms. In addition to the F-4EJ Kai fighter, the JASDF also operates the RF-4E reconnaissance version with 501 Squadron. This squadron will retire its Phantoms in fiscal 2020, which ends for Japan on March 31, 2021. (Mike Yeo/Staff)
3 of 12 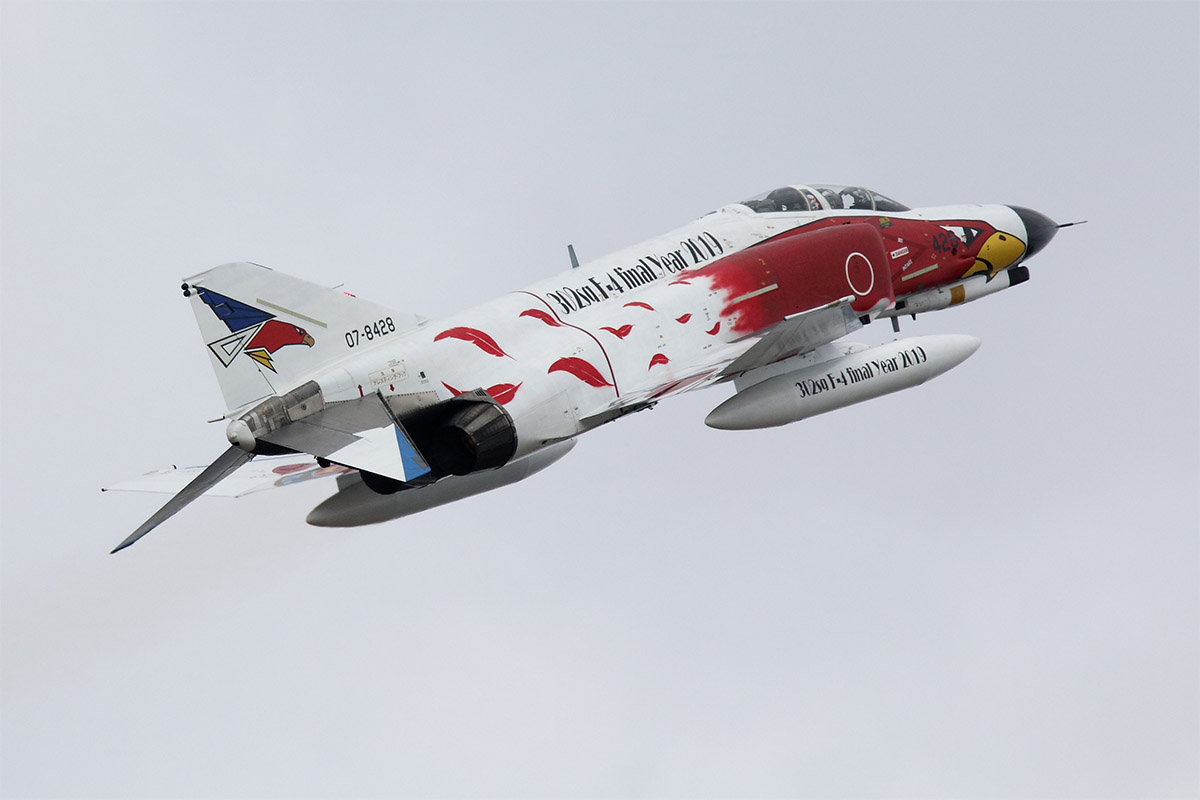 To commemorate 302 Squadron transitioning to the F-35, a pair of the unit’s Phantoms were given special commemorative paint schemes, one in a black base coat and the other in white, as shown here during an air show held at the base in early December. (Mike Yeo/Staff)
4 of 12 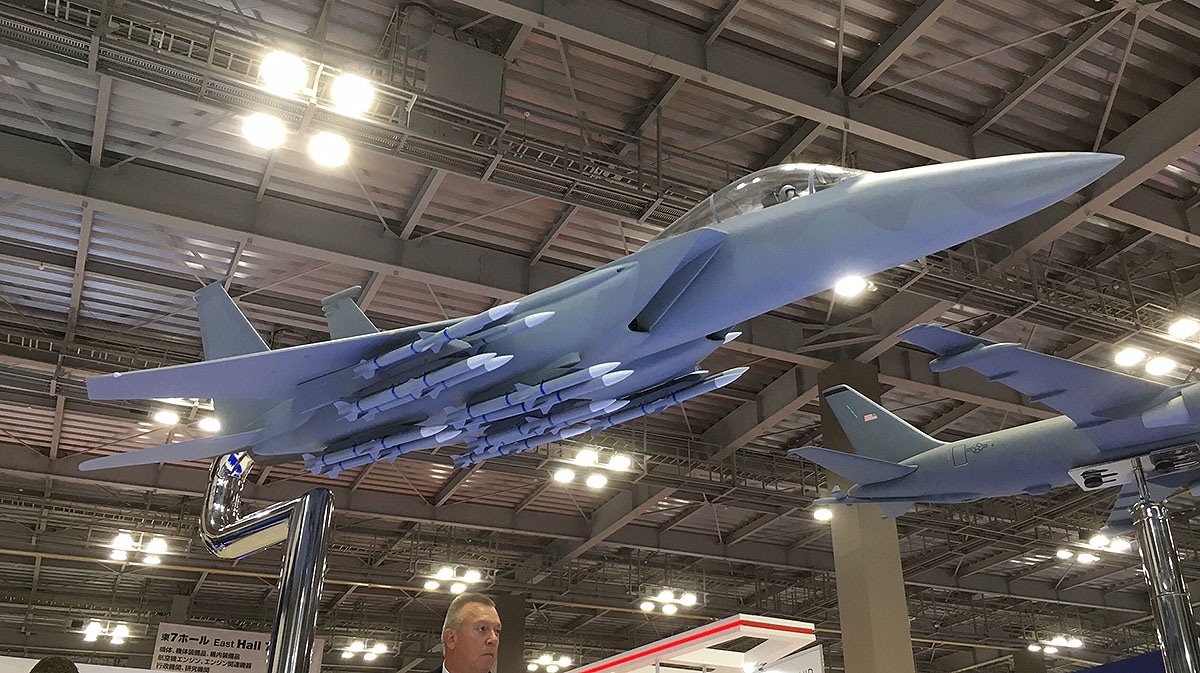 Boeing showcased a model of its F-15 Advanced Eagle at the Japan International Aerospace Exhibition held in Tokyo in late November. The aircraft was carrying 18 medium-range air-to-air missiles. Japan is planning to upgrade its F-15Js through the U.S. Foreign Military Sales program with new electronic warfare capabilities, radar, the ability to carry more missiles and the integration standoff land-attack missiles. (Mike Yeo/Staff)
5 of 12 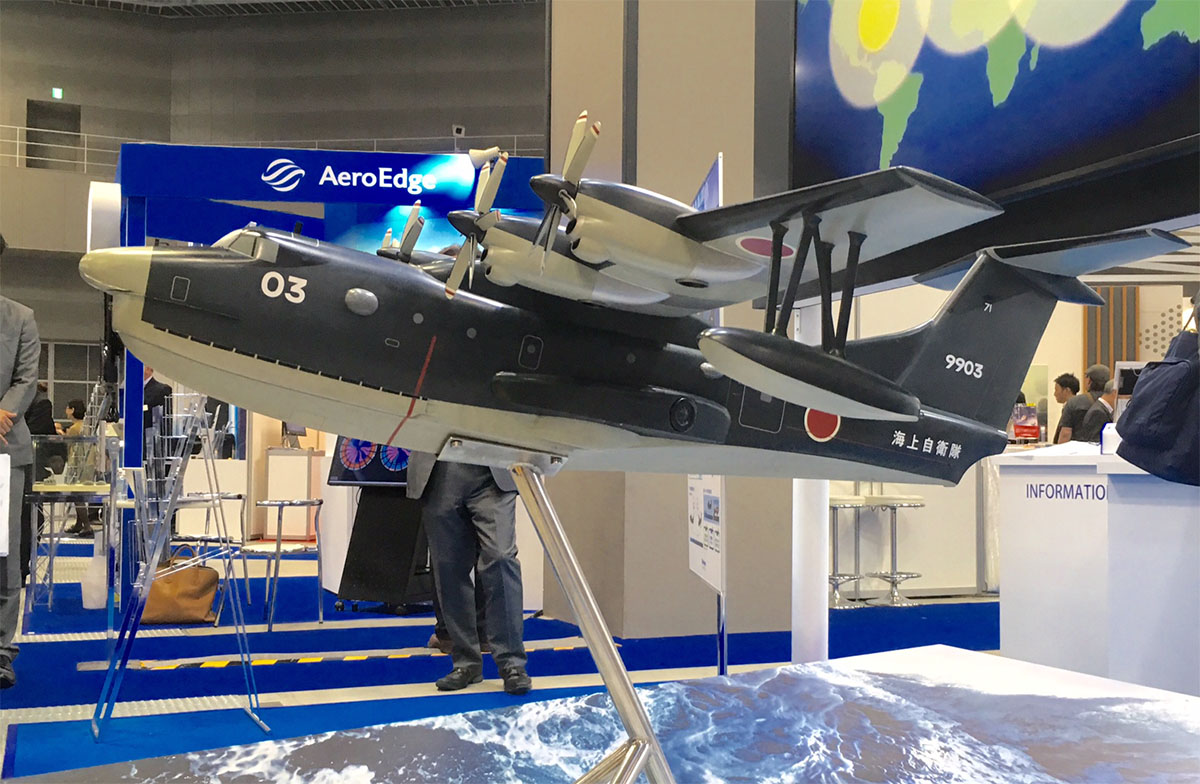 Japan’s ShinMaywa displayed a model of its US-2 amphibious aircraft at the exhibition. The company is continuing small-scale production, and hoping that interest from India and Indonesia results in contracts. (Mike Yeo/Staff)
6 of 12 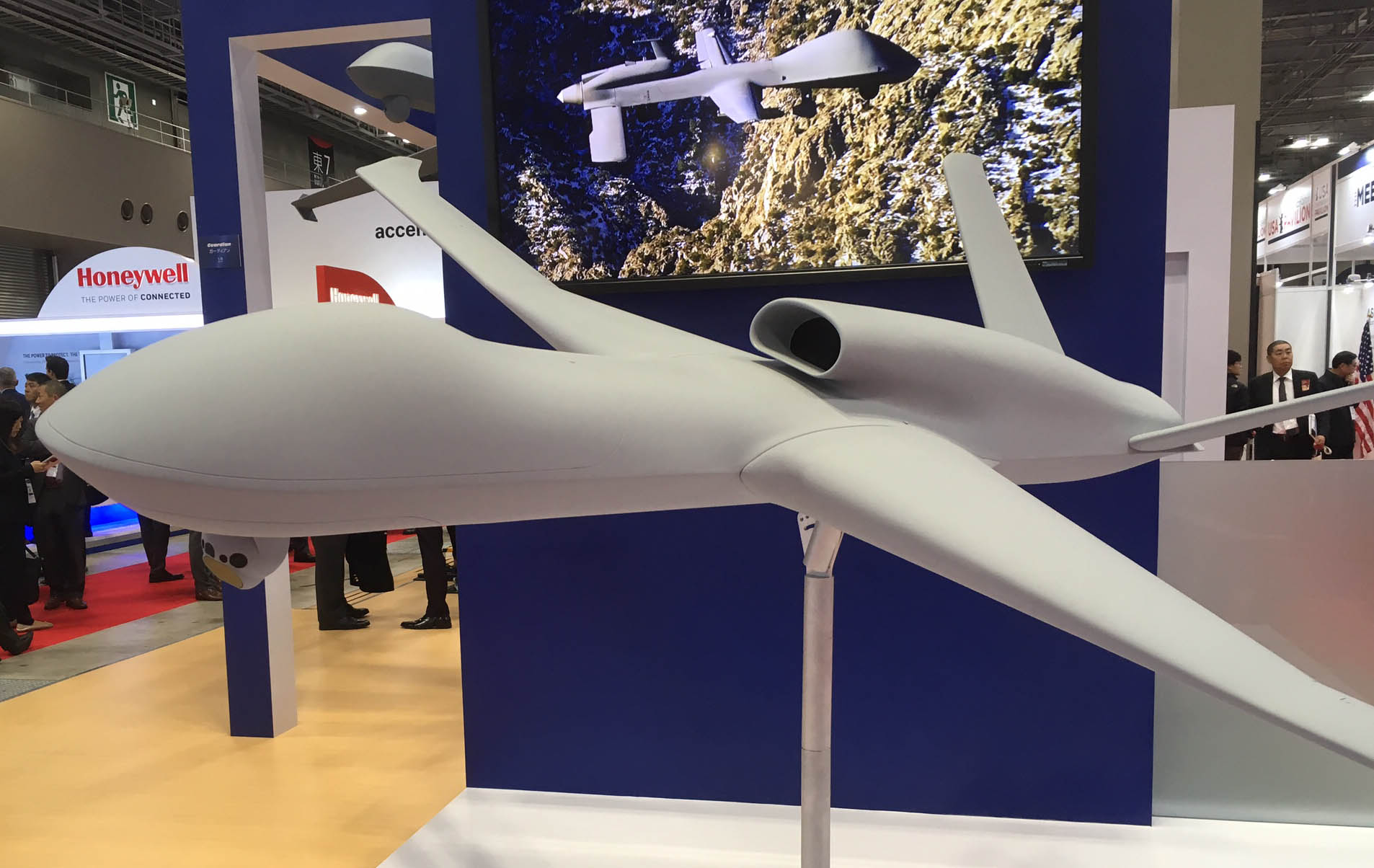 A General Atomics model of its Avenger unmanned aircraft system is shown. Japanese media reported the country wants to buy the Avenger for improved maritime domain awareness. (Mike Yeo/Staff)
7 of 12 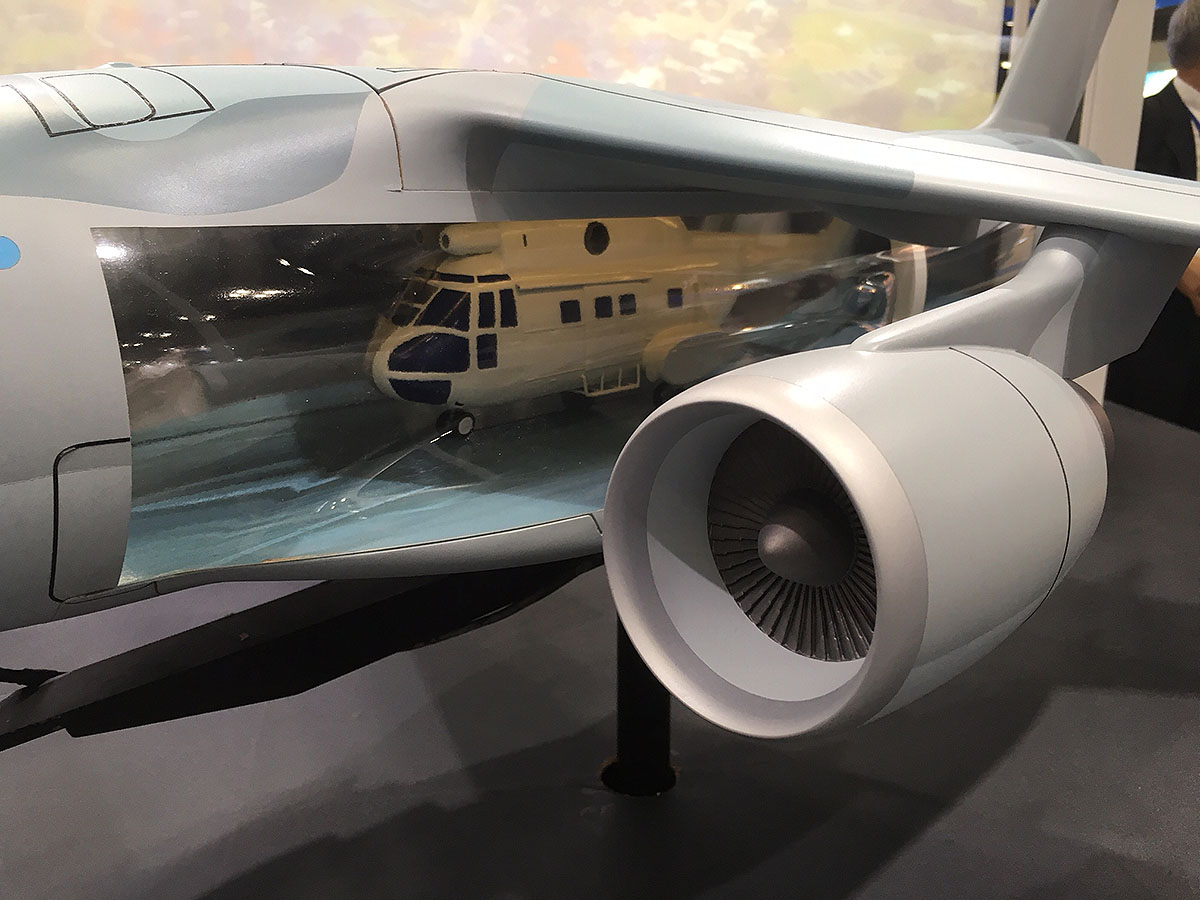 Kawasaki Heavy Industries model of its C-2 airlifter had a see-through fuselage to display the carrying capacity of its cargo hold, in this case showing it carrying an Airbus Helicopters H215 medium-lift helo. (Mike Yeo/Staff)
8 of 12 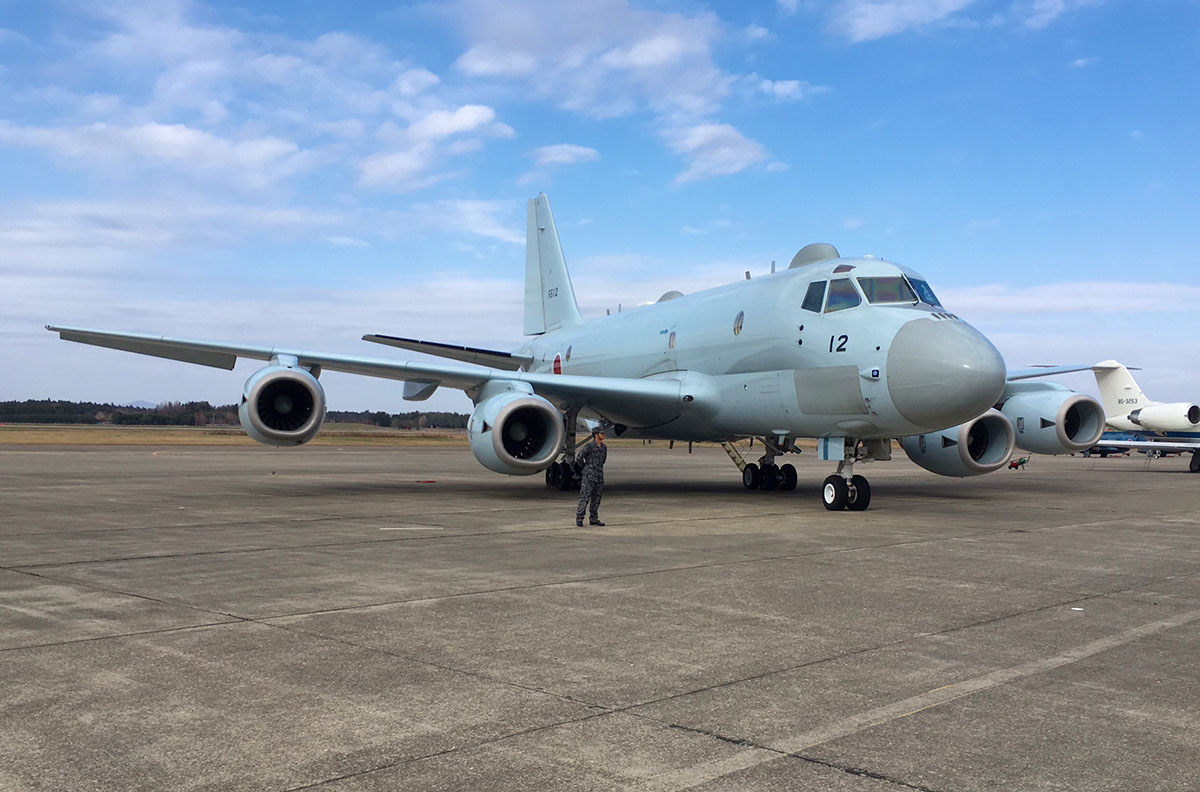 A Kawasaki P-1 anti-submarine aircraft, used by the Japan Maritime Self-Defense Force, was on the static display at a Hyakuri air show. Japan is continuing its marketing effort for the aircraft, although it faces a tough challenge at the upper end of this market from the established Boeing P-8 Poseidon. (Mike Yeo/Staff)
9 of 12 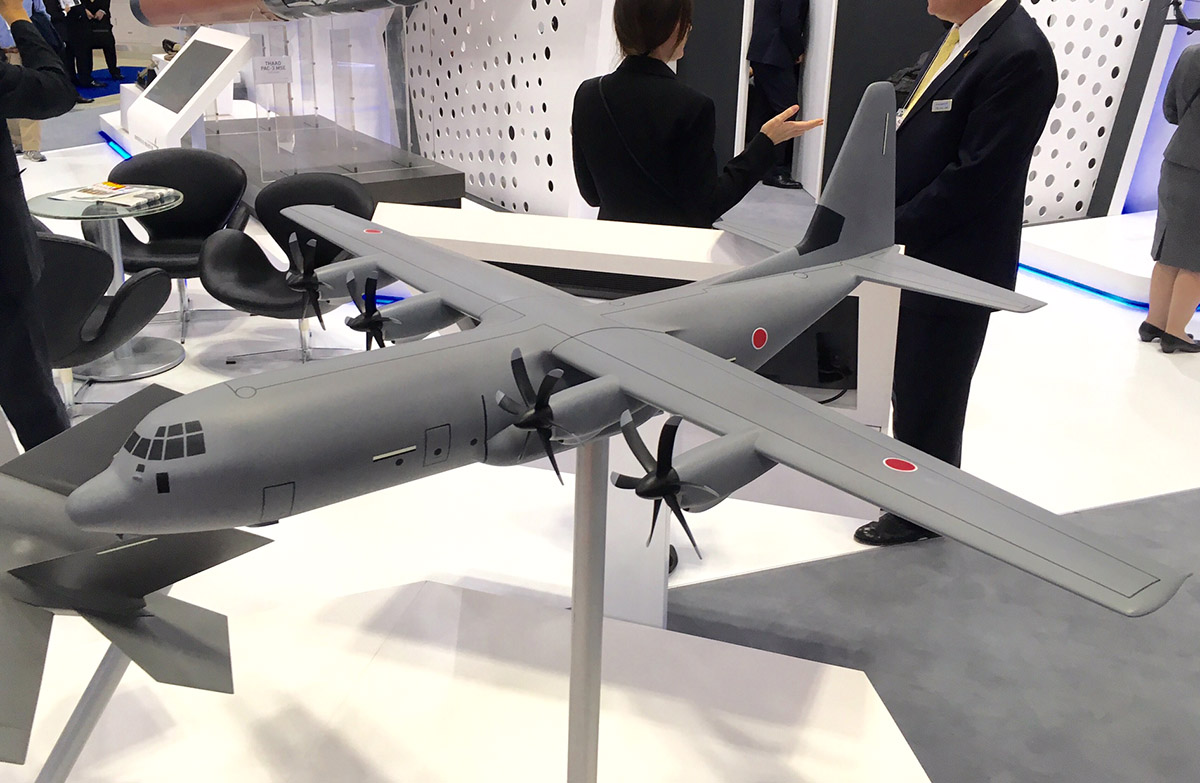 Lockheed Martin displayed a model of the C-130J Hercules airlifter in Japanese markings at the Japan International Aerospace Exhibition. The country’s Finance Ministry said this year that it has asked its defense counterpart to consider buying a cheaper airlifter instead of the indigenous C-2. (Mike Yeo/Staff)
10 of 12 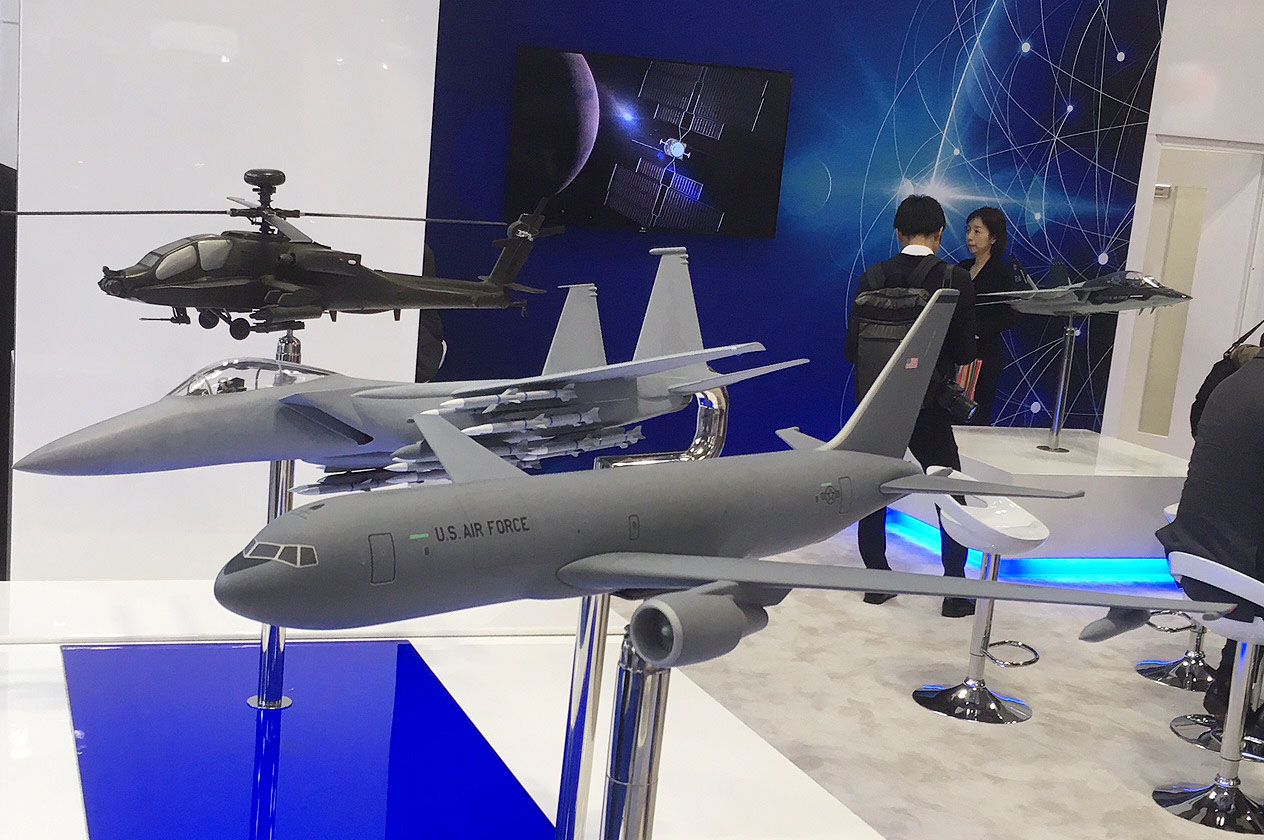 Boeing’s presence at the Japan International Aerospace Exhibition mainly consisted of civilian and commercial aircraft, although it displayed models of its KC-46A tanker, F-15 Advanced Eagle and AH-64E Apache helicopter gunship. Japan has already selected the KC-46 for its next tanker, having been cleared to buy four aircraft in 2016 and awarding a contract for one of them in late 2017. (Mike Yeo/Staff)
11 of 12 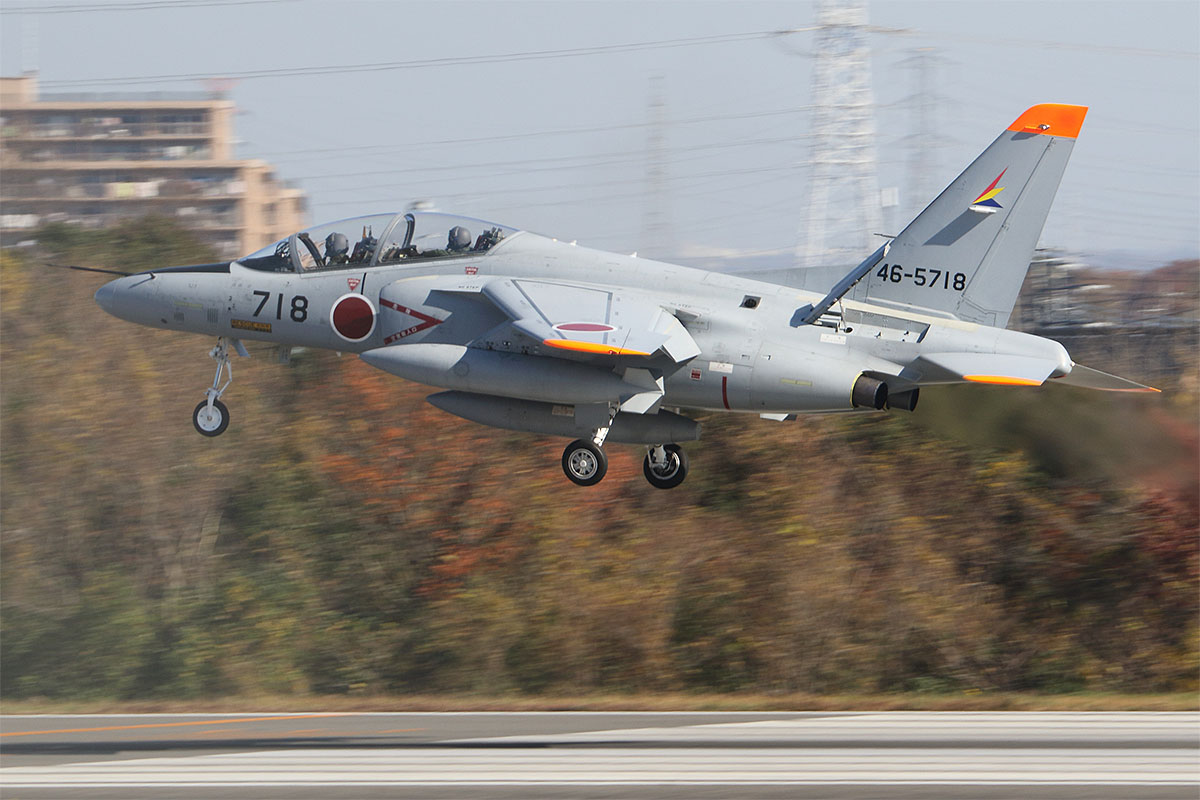 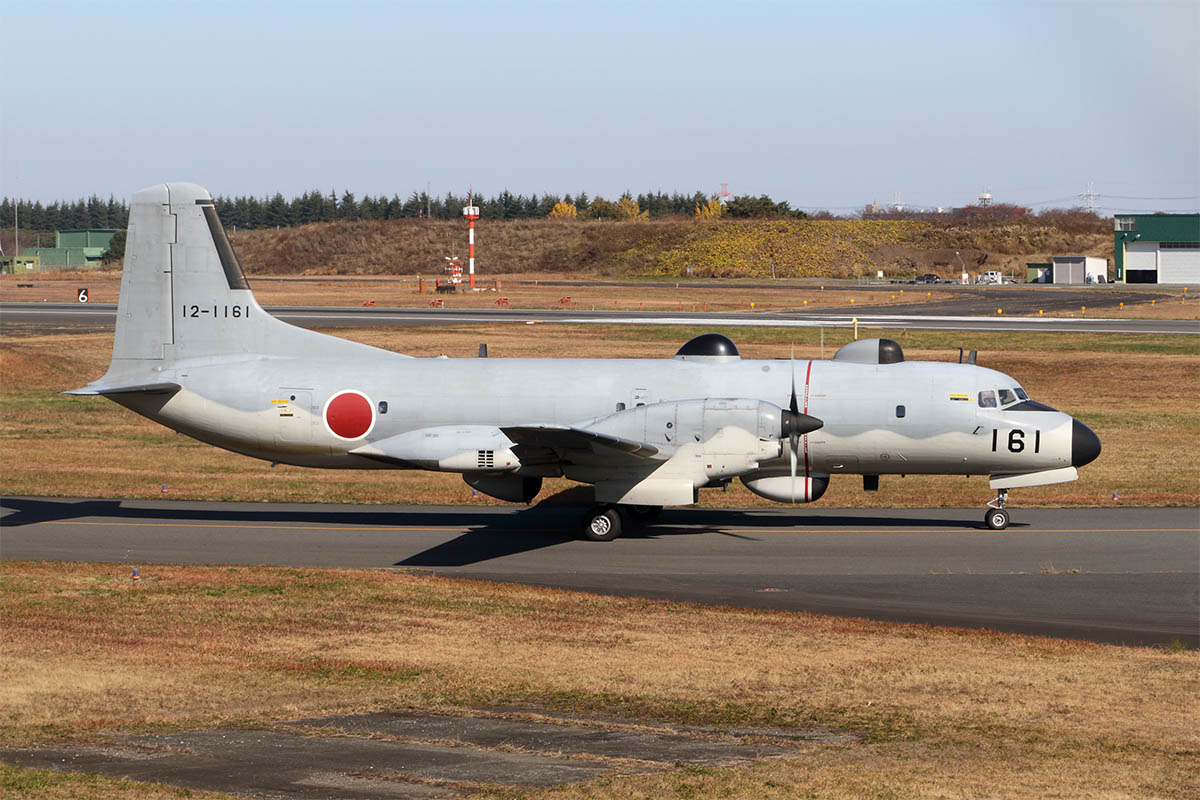 A NAMC YS-11EB electronic intelligence gathering aircraft taxis for takeoff at Iruma Air Base, western Tokyo, in late November. Japan currently flies four of these aircraft and is developing a replacement aircraft for this role using the C-2 airlifter. (Mike Yeo/Staff)

An upgrade program in the 1980s saw the reintroduction of ground-attack capabilities in the form of anti-ship missiles, bombs and rockets. An improved, lightweight radar was also fitted along with an improved avionics suite. Less than 100 Phantoms were upgraded, and were known as F-4EJ Kai (Improved) in JASDF service.

Japan also acquired 14 RF-4Es built by McDonnell Douglas to serve in a reconnaissance role. These, together with 17 F-4EJs modified to the RF-4EJ standard, capable of carrying a variety of external reconnaissance pods, make up Japan’s third Phantom squadron at Hyakuri. The unit, 501 Squadron, is also due to retire the Phantom in 2020, although it’s unclear if the unit will then transition to a new aircraft type.

Japan is introducing a fleet of 42 F-35As to replace the Phantom, with pilots training on the fifth-generation fighter at Misawa Air Base in the north of Japan’s main island of Honshu as deliveries of Japan’s F-35s continue apace.

The 301 and 302 squadrons are due to permanently move to Misawa following the transition to the F-35.