LUZHSKY RANGE, Russia — Russian President Vladimir Putin on Monday attended the weeklong war games with Belarus that have demonstrated the Russian military’s resurgent might and made neighboring countries nervous.

As part of the maneuvers, the Russian military on Monday also test-fired its state-of-the-art cruise missile at a mock target in the Central Asian nation of Kazakhstan, showcasing the weapon’s extended range and precision strike capability.

Some nervous NATO members, including the Baltic states and Poland, have criticized an alleged lack of transparency about the war games and questioned Moscow’s intentions.

The exercises, held in several firing ranges in Belarus and western Russia, run through Wednesday. Russia and Belarus say 5,500 Russian and 7,200 Belarusian troops are participating, but some NATO countries have estimated that up to 100,000 troops could be involved. 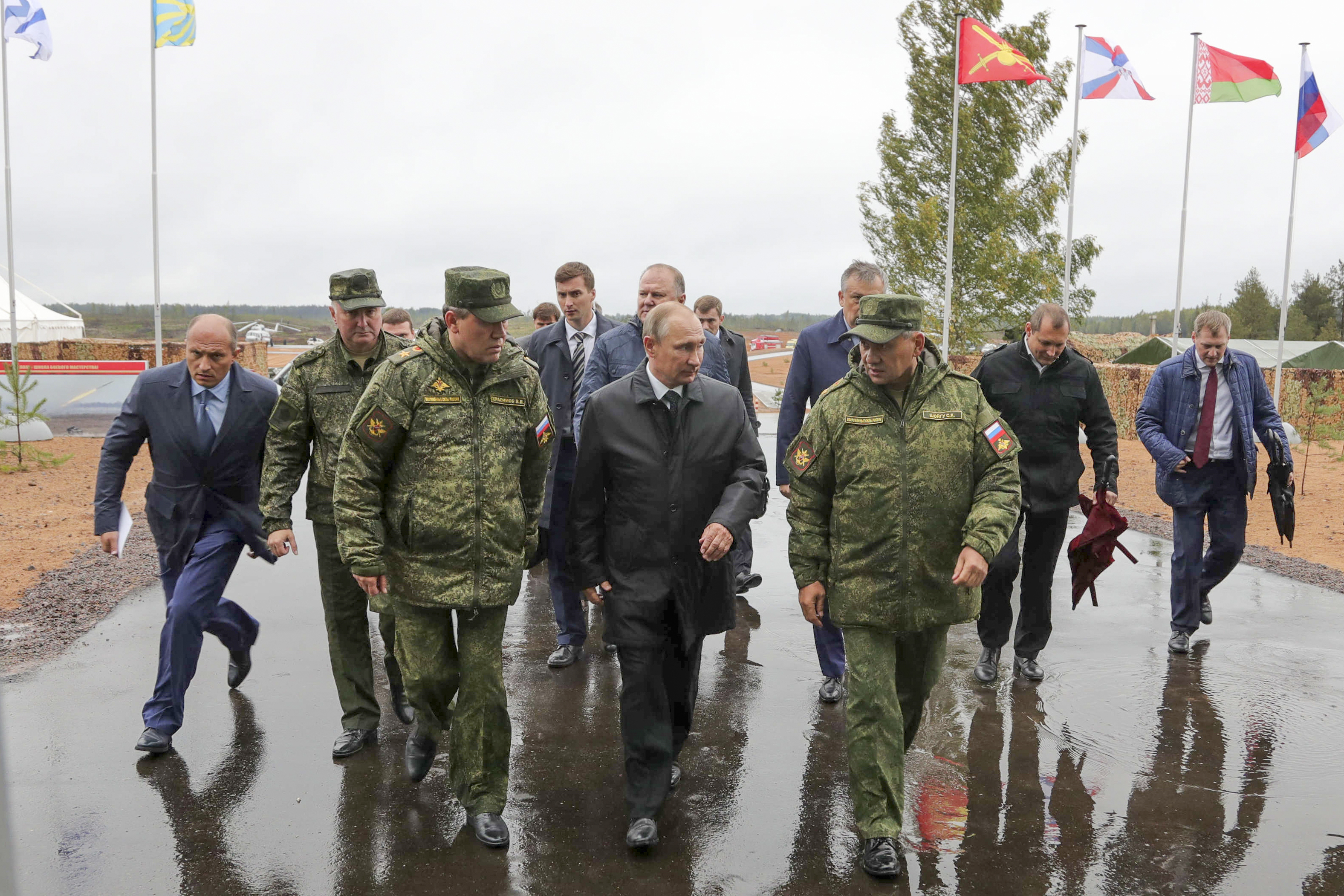 Russian President Vladimir Putin, center, walks with defense officials to attend a military exercise at a training ground at the Luzhsky Range, near St. Petersburg, Russia, on Sept. 18, 2017. (Sputnik/Kremlin Pool via AP)
2 of 7 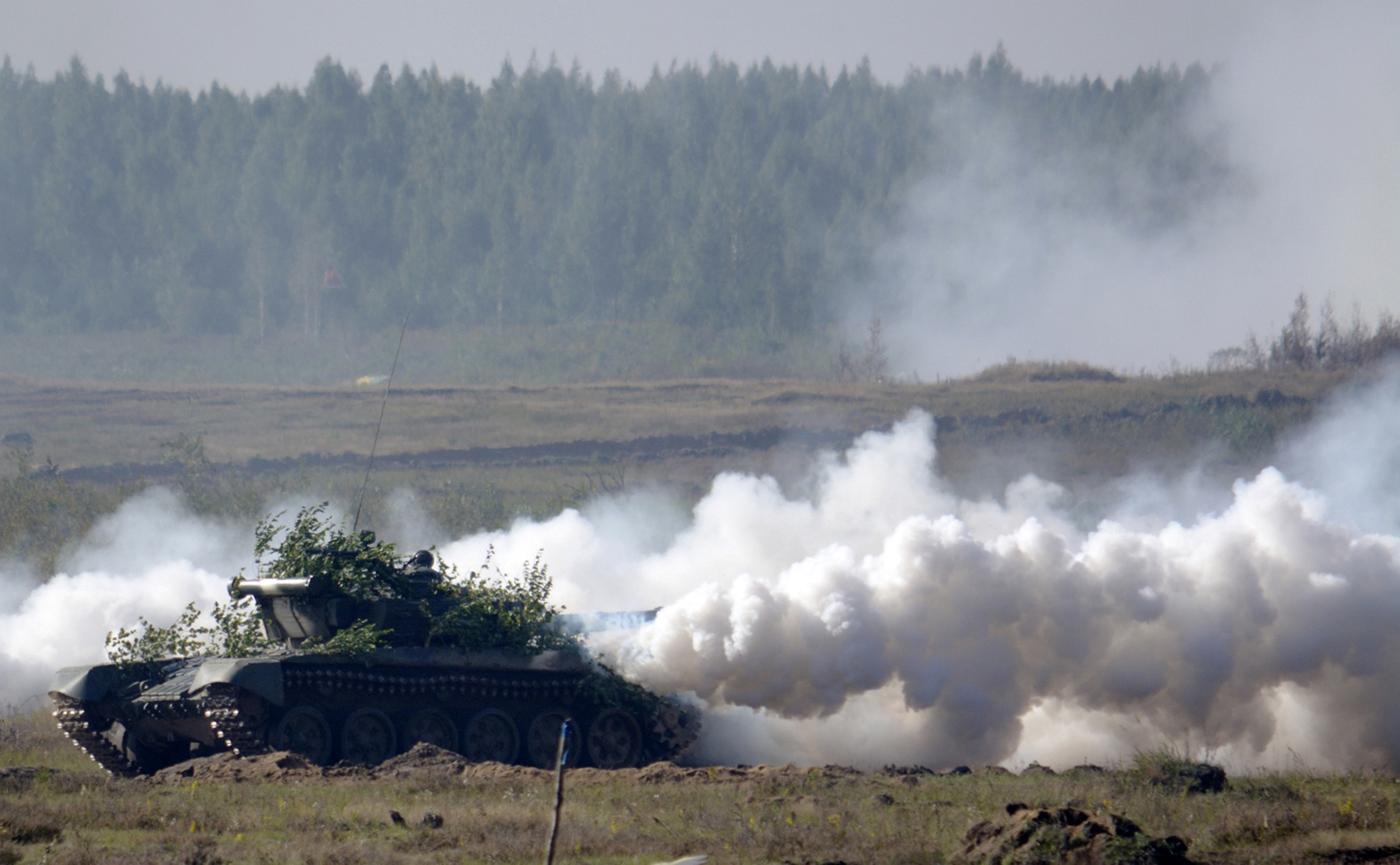 Russia and Belarus began major war games Sept. 14, 2017, an operation involving thousands of troops, tanks and aircraft on NATO's eastern edge practicing how to hunt down and destroy armed spies, among other maneuvers. (Vayar Military Agency via AP)
3 of 7 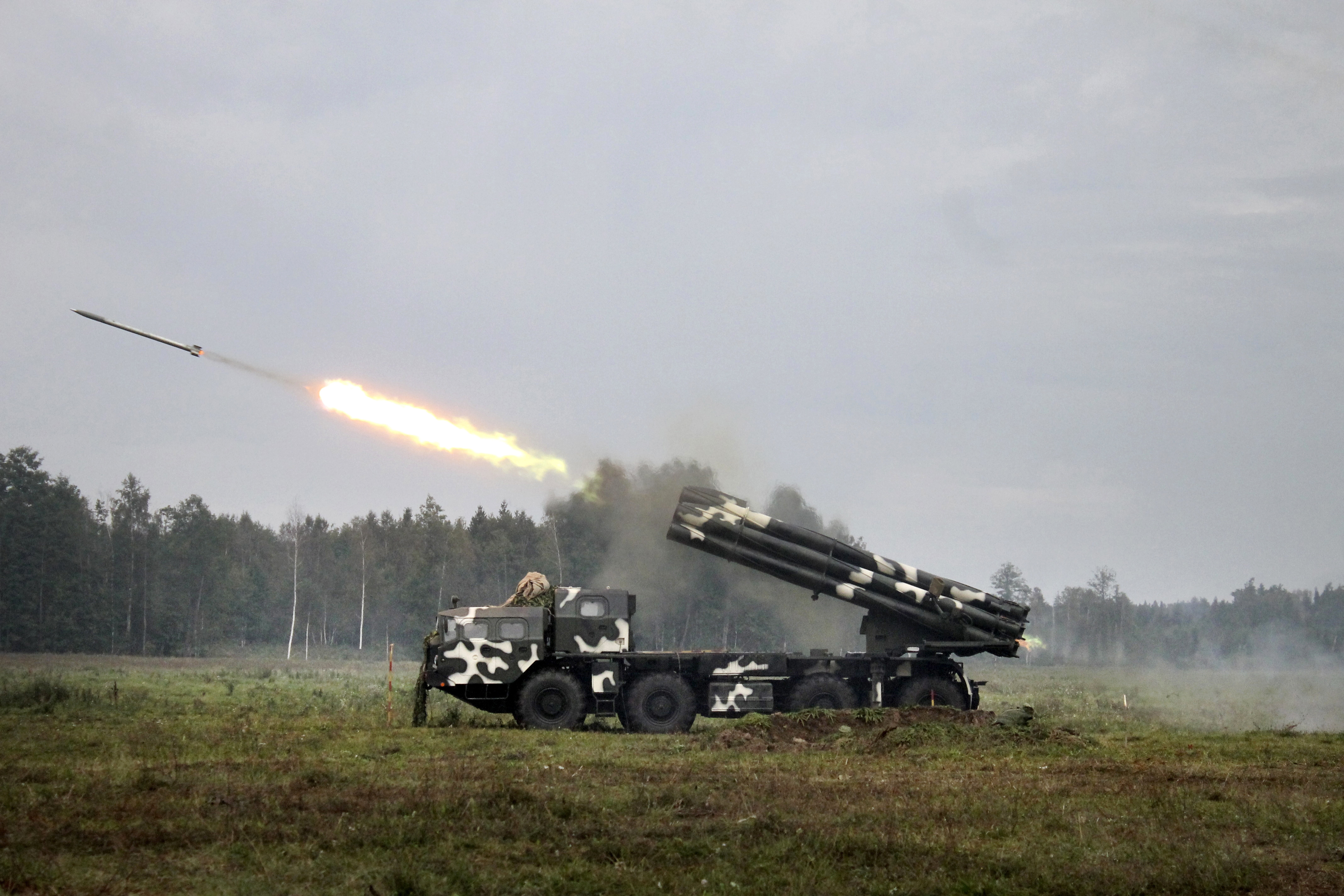 A Belarusian Army air-defense missile system fires on a position during a military exercise at a training ground at an undisclosed location in Belarus. (Vayar Military Agency via AP)
4 of 7 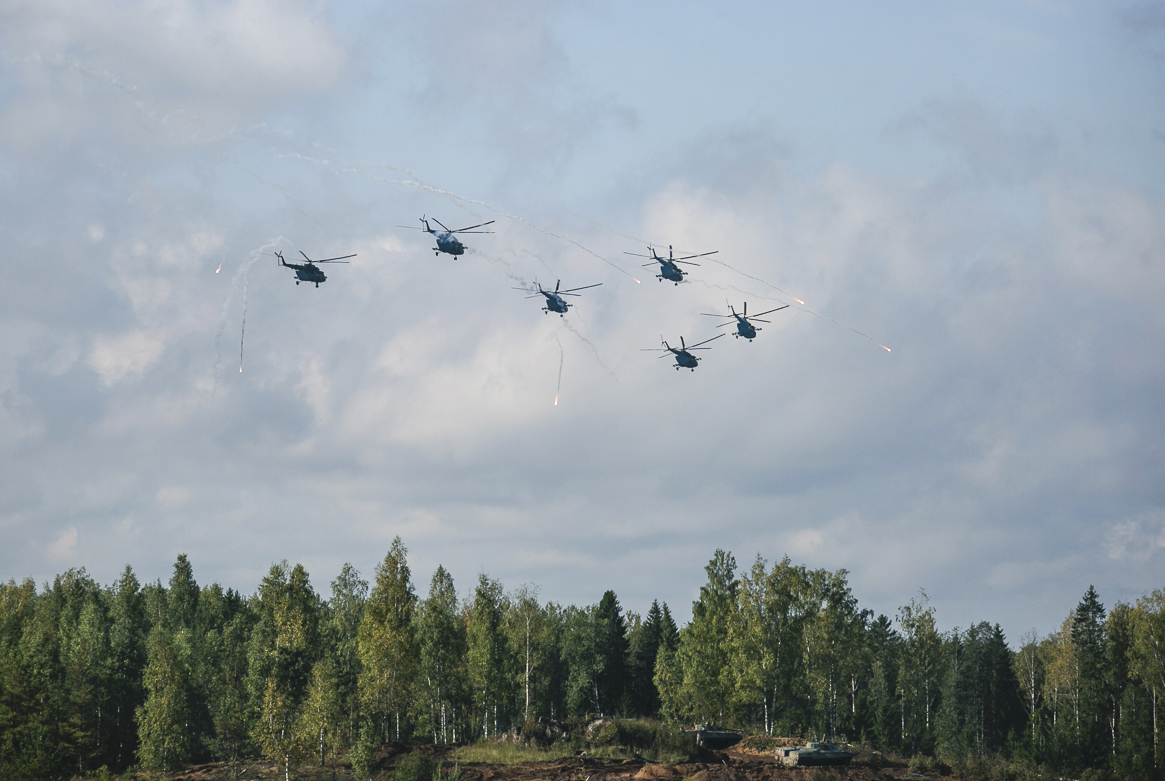 Russian military helicopters fly during a military exercise at a training ground at the Luzhsky Range, near St. Petersburg, Russia, on Sept. 18, 2017. The Zapad 2017 maneuvers have caused concern among some NATO members neighboring Russia, who have criticized a lack of transparency about the exercises and questioned Moscow's real intentions. (Russian Defence Ministry Press Service via AP)
5 of 7 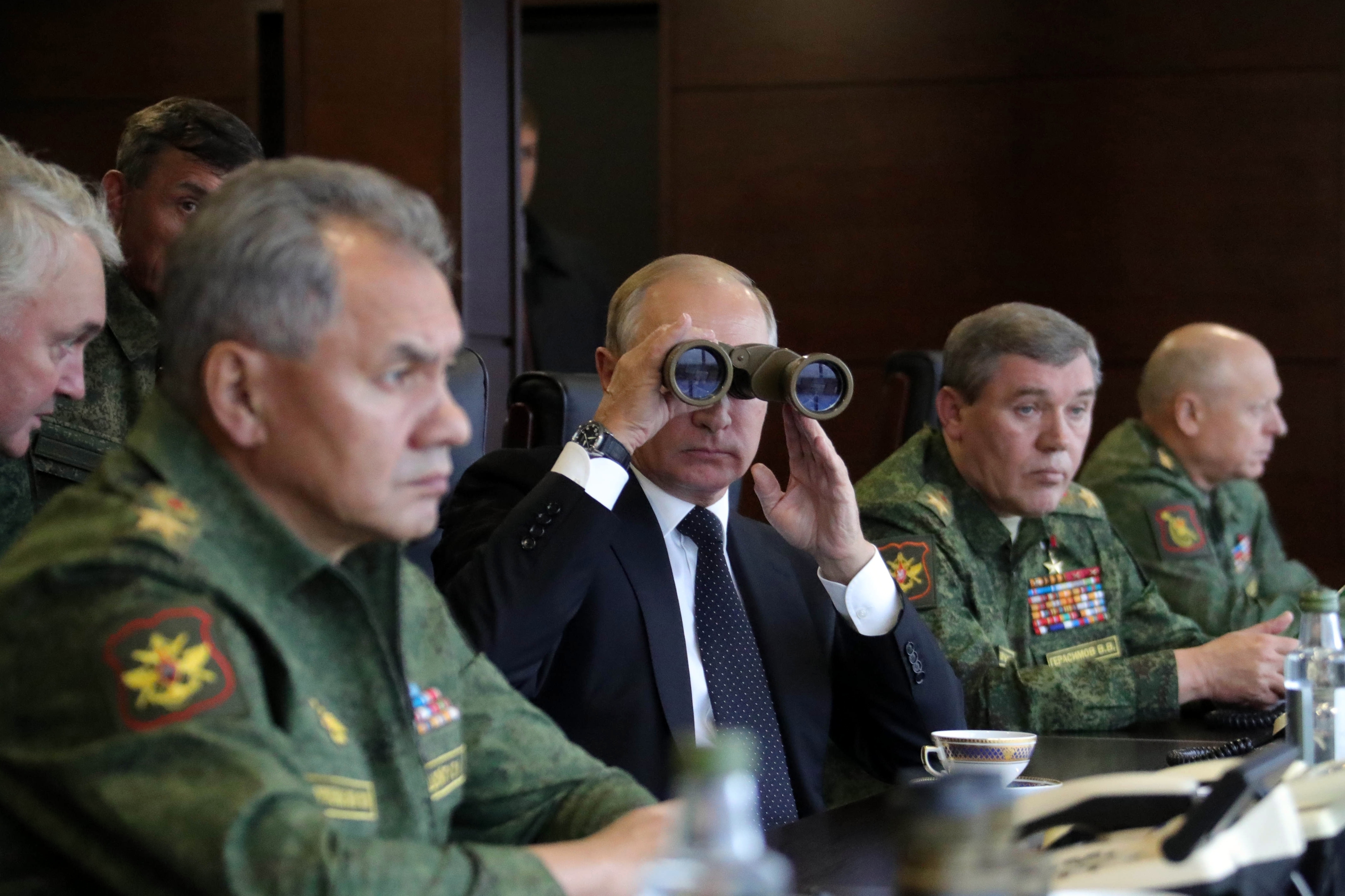 Russian President Vladimir Putin, center, Defence Minister Sergei Shoigu, left, and Chief of the General Staff of the Russian Armed Forces Valery Gerasimov, second from right, watch a military exercise at a training ground at the Luzhsky Range, near St. Petersburg, Russia, on Sept. 18, 2017. (Mikhail Klimentyev/Sputnik/Kremlin Pool via AP)
6 of 7 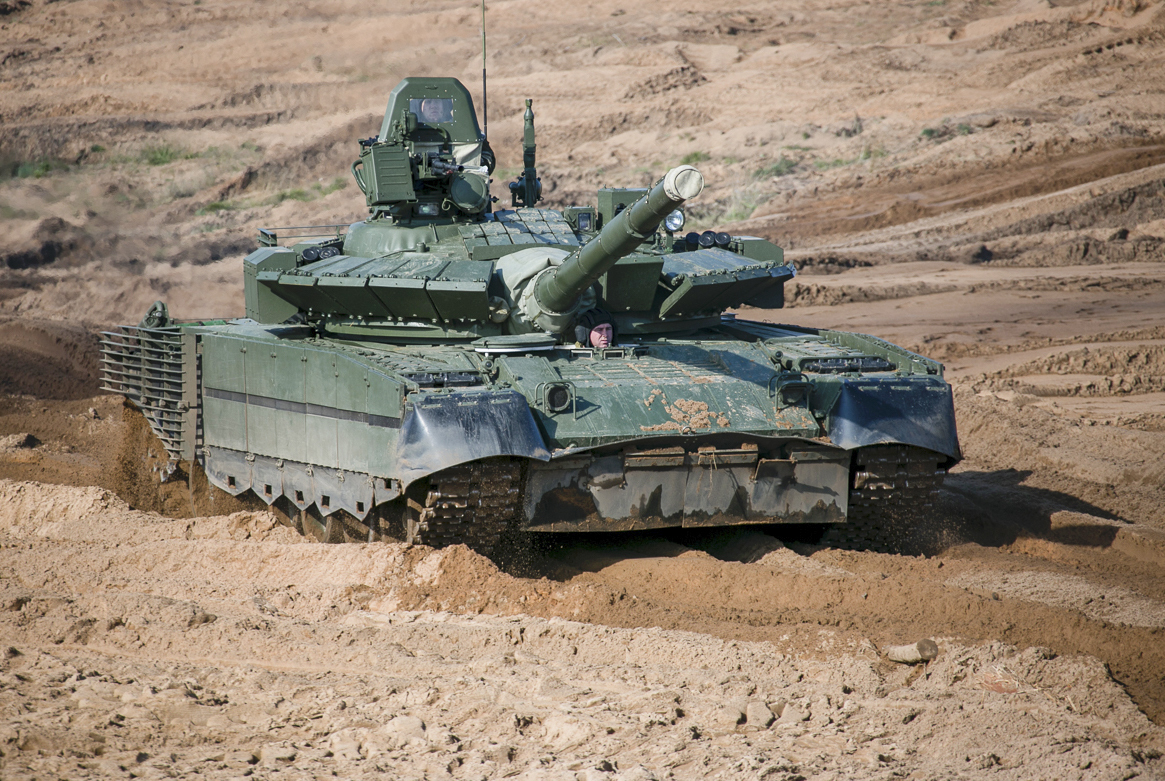 A Russian tank rolls during a military exercise at a training ground at the Luzhsky Range, near St. Petersburg, Russia, on Sept. 18, 2017. (Russian Defence Ministry Press Service via AP)
7 of 7 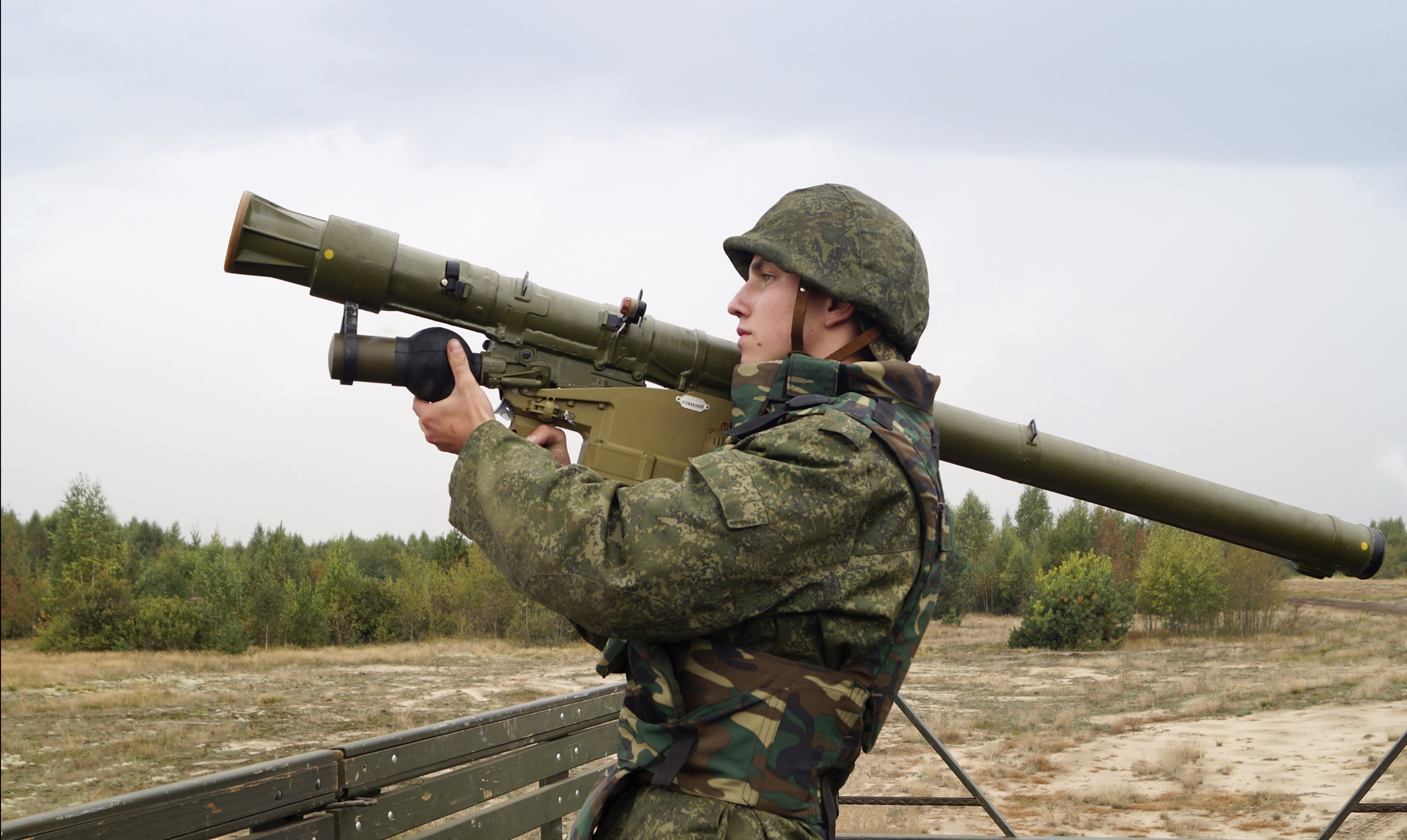 A soldier with Belarus' Army prepares to fire a portable air-defense missile during a military exercise at a training ground at an undisclosed location in Belarus.. (Vayar Military Agency via AP)

With Russia’s relations with the West at a post-Cold War low point over the fighting in Ukraine, worries about the war games ranged from allegations that Russia could permanently deploy its forces to Belarus to fears of a surprise onslaught on the Baltics.

Sign up for our Training & Sim Report
Get the latest news in training and simulation technologies
Thanks for signing up!
For more newsletters click here

Russia and Belarus have said the exercises simulate a response to foreign-backed “extremists” and insisted the maneuvers don’t threaten anyone.

Their troops are fighting three invented “aggressor countries” — Veishnoriya, Lubeniya and Vesbariya. However, the Baltic states — Estonia, Latvia and Lithuania — and Poland see the monikers for the made-up enemies as thinly disguised references to their nations.

NATO has rotated military units in the Baltics and Poland, and the alliance has staged regular drills in the region, activities Moscow has criticized as a reflection of the alliance’s hostile intentions.

Russia and Belarus kept the stated number of troops involved in the drills just fewer than 13,000, a limit allowing them to dodge more intrusive inspections by NATO in line with international agreements. The practice maneuvers nonetheless have put Russia’s massive military mobilization capability on display.

They also have involved various branches of the Russian military, including the Air Force’s long-range bombers and missile forces. In a reflection of the drills’ broad scope, they featured Monday’s launch of the Iskander-M cruise missile, a new weapon that has drawn concern from the United States.

The missile, launched from the Kapustin Yar firing range in southwestern Russia, hit a mock target at a range in Kazakhstan, some 480 kilometers away, according to the Russian Defence Ministry.

The U.S. has accused Russia of developing cruise missiles banned by the 1987 Intermediate-Range Nuclear Forces Treaty with a goal to threaten U.S. facilities in Europe and the NATO alliance. Moscow has rejected the accusations and insisted it has adhered to the pact.

The INF Treaty bans an entire class of weapons — all land-based cruise and ballistic missiles with a range between 500 and 5,500 kilometers. The Iskander-M’s stated range puts it just below the pact’s threshold.

The Zapad 2017 maneuvers are intended to underline the close military cooperation between Russia and Belarus, but also revealed signs of strains between the allies. While Putin watched the previous drills in 2013 with his Belarusian counterpart, Belarus President Alexander Lukashenko said he would watch them separately on Wednesday.

Lukashenko has relied on subsidized Russian oil and gas supplies and billions of dollars in loans to keep his nation’s Soviet-style economy afloat. At the same time, he often has bristled at what he described as the Kremlin’s attempts to subdue Belarus and force it to surrender control over prized economic assets.

Lukashenko also has flirted with the West to try to reduce his dependence on Russia. His decision to dodge a joint appearance with Putin at the military exercises was seen by observers as an attempt to put some distance between Belarus and its giant eastern neighbor.

“Lukashenko is trying to mend ties with the West to get new loans, and the Kremlin’s military games don’t help that,” Alexander Klaskovsky, a Minsk-based political analyst, said.

Isachenkov reported from Moscow. Yuras Karmanau in Minsk contributed to this report.