MELBOURNE, Australia — Embraer has responded to a recent New Zealand request for information (RFI) for a Future Air Mobility Capability (FAMC), with an offer for five KC-390 multimission transport aircraft.

The KC-390 is under development against a contract for 28 aircraft to replace the Brazilian Air Force’s fleet of Lockheed C-130H Hercules, with first deliveries beginning in 2018. The Brazilian aircraft manufacturer said it also holds letters of intent, for a further 32 aircraft, from five different countries and is actively marketing the aircraft to potential customers in Europe, the Middle East and Latin America.

The New Zealand proposal marks the company’s first opportunity for the KC-390 in the Asia-Pacific region, and the bid is supported by Boeing defense products division under the terms of a teaming agreement announced at the Farnborough International Airshow in July.

The Royal New Zealand Air Force’s FAMC program seeks to acquire a fixed-wing transport capability to replace the country’s five C-130Hs and two Boeing 757s, either with two new aircraft or a single type able to meet essential requirements in both strategic and tactical airlift roles.

"We are very positive that we can provide the best solution for New Zealand for the mission requirements that they have presented to us (and) I think they are very interested in the KC-390. But we understand and respect that this is a competition and we will fulfill all the required steps of the process," Embraer Defense & Security President and CEO Jackson Schneider said at the company’s corporate headquarters in São Paulo, Brazil, last week. 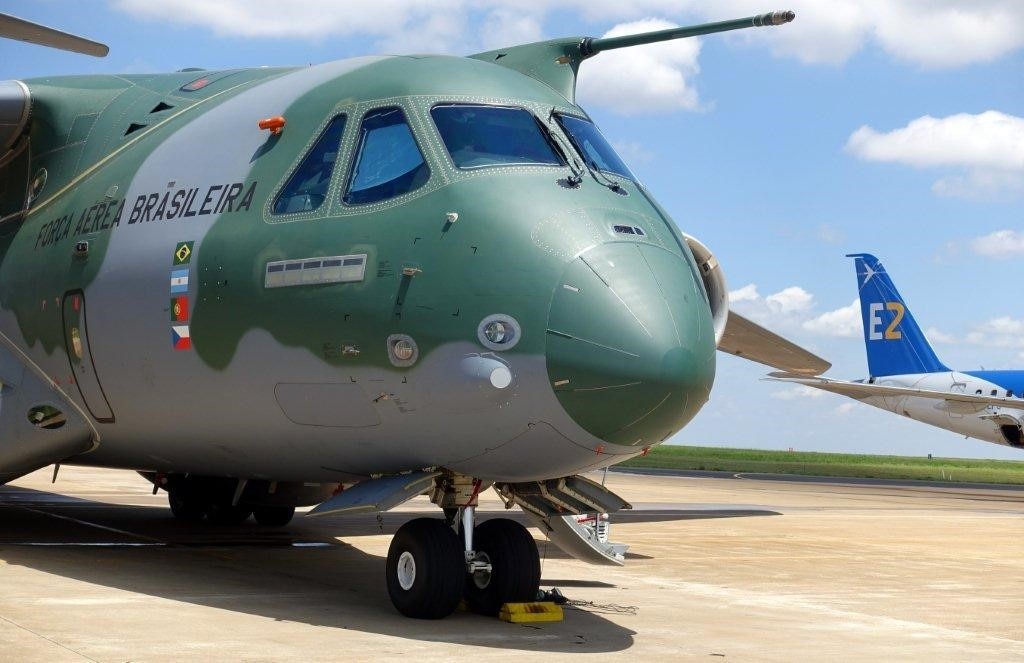 The KC-390, shown here, is under development against a contract for 28 aircraft to replace the Brazilian Air Force’s fleet of Lockheed C-130H Hercules, with first deliveries beginning in 2018.
Photo Credit: Nigel Pittaway/Staff
"We are in advanced talks with New Zealand (but) we are not negotiating contracts at the present time. The process is advanced, but it is a competition and we’re not the only bidder," he said.

Schneider said that the only other manufacturer with a product in the same class as the KC-390 currently in production is US giant Lockheed Martin, with the C-130J Super Hercules.

He also revealed that Embraer is negotiating with what he considers a global civil customer for the KC-390, which will be certified to US Federal Aviation Administration and European Aviation Safety Agency airworthiness requirements, but declined to provide specific details.

"There is one specific discussion with a global company for a fully civil application. It will not require too much customization for the specific mission that they are talking to us about," he said.

Another senior Embraer executive also revealed that the manufacturer is considering the development of a maritime patrol version of its new E190-E2 commercial airliner at the invitation of the New Zealand government to meet a forthcoming RFI for a Future Air Surveillance Capability.

The RFI will canvas proposals to replace the Royal New Zealand Air Force's recently updated Lockheed P-3K2 Orion maritime patrol aircraft in the mid-2020s, for an FOC planned sometime between 2023 and 2025.

Embraer Defense & Security's commercial senior vice president, Fernando Ribeiro de Queiroz, said the company will develop a maritime patrol version of the 190-E2, the latest version of its successful commercial "E" jet family, if required by the customer, but he also suggested that a KC-390 configured for the maritime patrol role might provide greater synergy with the FAMC response if New Zealand's requirements are not inflexible.

"For example New Zealand wants the airplane to achieve M0.82, but if this speed is not a strong requirement we can support them with the KC-390, which is capable of M0.80," he added.

Embraer is proposing to modify the KC-390 with a 360-degree surface search radar installed in the nose, similar to the configuration offered to Canada in that country's long-range search-and-rescue competition, together with a palletized maritime patrol mission system.

"A palletized mission system and radar equipment in the nose and other equipment would fulfill the requirements for maritime patrol, but it does not compromise the other missions that the aircraft is already capable of performing," de Queiroz explained.

Sign up to get The Drift
Sign up for our weekly newsletter to go deeper into all things Navy with David Larter.
Thanks for signing up!
Click for more newsletters

"You can take out the mission system and fly with cargo, passengers, medevac, etc., so it would be a single fleet with perhaps two aircraft capable of being configured for maritime patrol and five dedicated to air mobility. It is how we can show synergy between both projects, but at the same time we have a solution that is 100 percent dedicated to maritime patrol with the E190-E2."

Preventing extremism, women in the draft, and UFOs! | Reporters Roundtable

The Military Times team discusses the Pentagon's evolving approach to defining and preventing extremism in the ranks, the failure of a push to add women to the draft, and the hovering report of UFOs and what it means for the military. That and more from this week's Reporters Roundtable.