TEL AVIV, Israel — The Israeli Air Force will host flying forces from seven nations later this year in the largest and most complex air exercise in its history.

Nearly 100 aircraft and several hundreds of air warriors and support crews from the United States, Greece, Poland, France, Germany, India and Italy will converge here in the autumn for Blue Flag, a biennial, two-week drill aimed at honing the type of planning, targeting and coordinated command and control demanded by coalitions operating in high-threat theaters.

"It will be a massive exercise; the biggest ever for the IAF. Seven nations plus Israel," said Lt. Col. Richard Hecht, the Israeli Air Force's chief of international affairs.

Of the seven confirmed participants, four have never before actively participated in Blue Flag, which began in 2013 and continued in 2015 as a four-way exercise involving Israel, the U.S., Greece and Poland. This year, however, four new nations are participating, along with officers and attaches from nearly 40 countries who are expected to attend as observers.

"Everybody wants to engage and cooperate with the IAF. It’s a privilege," said Hecht, who spent four years on the Israel Defense Forces’ J5 planning staff, primarily coordinating bilateral issues between the U.S. and Israel. 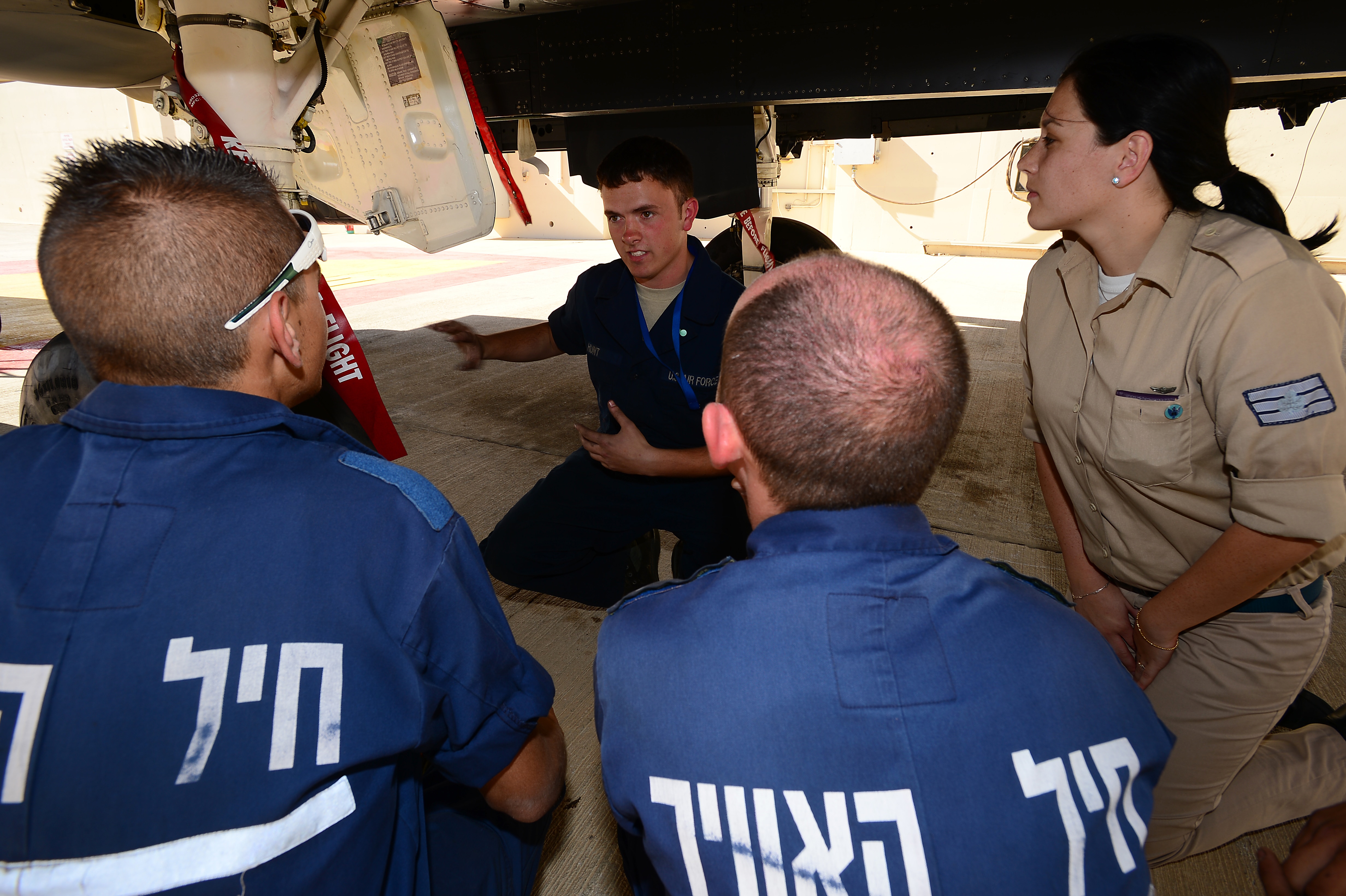 U.S. Air Force Airman 1st Class Jesse Hunt, 48th Aircraft Maintenance Squadron crew chief, talks with Israeli and Italian maintainers about the F-15E Strike Eagle during the Blue Flag exercise at Uvda Air Force Base, Israel, on Nov. 26, 2013.
Photo Credit: Master Sgt. Lee Osberry/US Air Force
"People are seeing there’s a lot to learn from Israel. In our tiny airspace and in the environment around us, things are so intense. The Russians are here. … Many of the world’s air forces are passing through here on their way to operations in Syria and elsewhere in the region. So we provide a sort of battle lab in which forces can hone a spectrum of skills needed to combat growing threats," Hecht said.

Unlike the annual Red Flag drill hosted by the U.S. Air Force at Nellis Air Force base in Nevada, Israel’s Blue Flag does not pit flying forces against one another in various combat drills. Rather, said Hecht, the Israeli event is designed to satisfy respective requirements of participating forces and emphasize cooperation over competition.

"It’s not a competitive event. It’s about partnerships, and we tailor parts of the drill to fit each nation’s requirements," Hecht said. "And it's not only the exercise itself but the buildup to the exercise where you have all these nations planning together, getting to know one another, building relationships and talking about how we fight."

The first planning conference for Blue Flag was held here last month, with another one or even two planned before the actual event later this year. Hecht said that it gives lower-level officers and rank-and-file airmen and aircrews the chance to forge cooperation normally reserved for the much higher echelons.

"It’s a difference when generals meet generals to discuss cooperation and when large numbers of fighting forces actually come together to plan and train together. When that happens, it’s a different ballgame," he said.

He declined to specify what exactly is planned for this year’s drill, but if the last Blue Flag is any indication, forces will conduct many hundreds of sorties using all of the nation’s airspace to practice air-to-air battles, ground attacks on fixed- and moving targets, and maneuvering amid threats from surface-to-air batteries and shoulder-launched missiles.

"This is much bigger than anything we’ve done before, and we’re all excited for the opportunity to come together and build partnerships and share knowledge," he said.

Defense News geolocated an image showing a Tu-95MS bomber taking off at night to a location northeast of Hangzhou-Jianqiao airbase.

The new office will help the Pentagon leverage private investment to overcome the "valley of death" problem that often derails technology programs.

By moving into the sector, LMI said it's seeking to provide input and technologies to all domains of the armed forces.

Former Chief of Space Operations Jay Raymond, in his first public appearance since retiring, emphasized the importance of commercial partnerships.

The U.S. Army has awarded Raytheon what could be worth up to $1.2 billion to deliver six more surface to air missile systems for Ukraine.

What is the future of Air Force fighter drones?

Which issue has the VA Secretary “pissed off?”