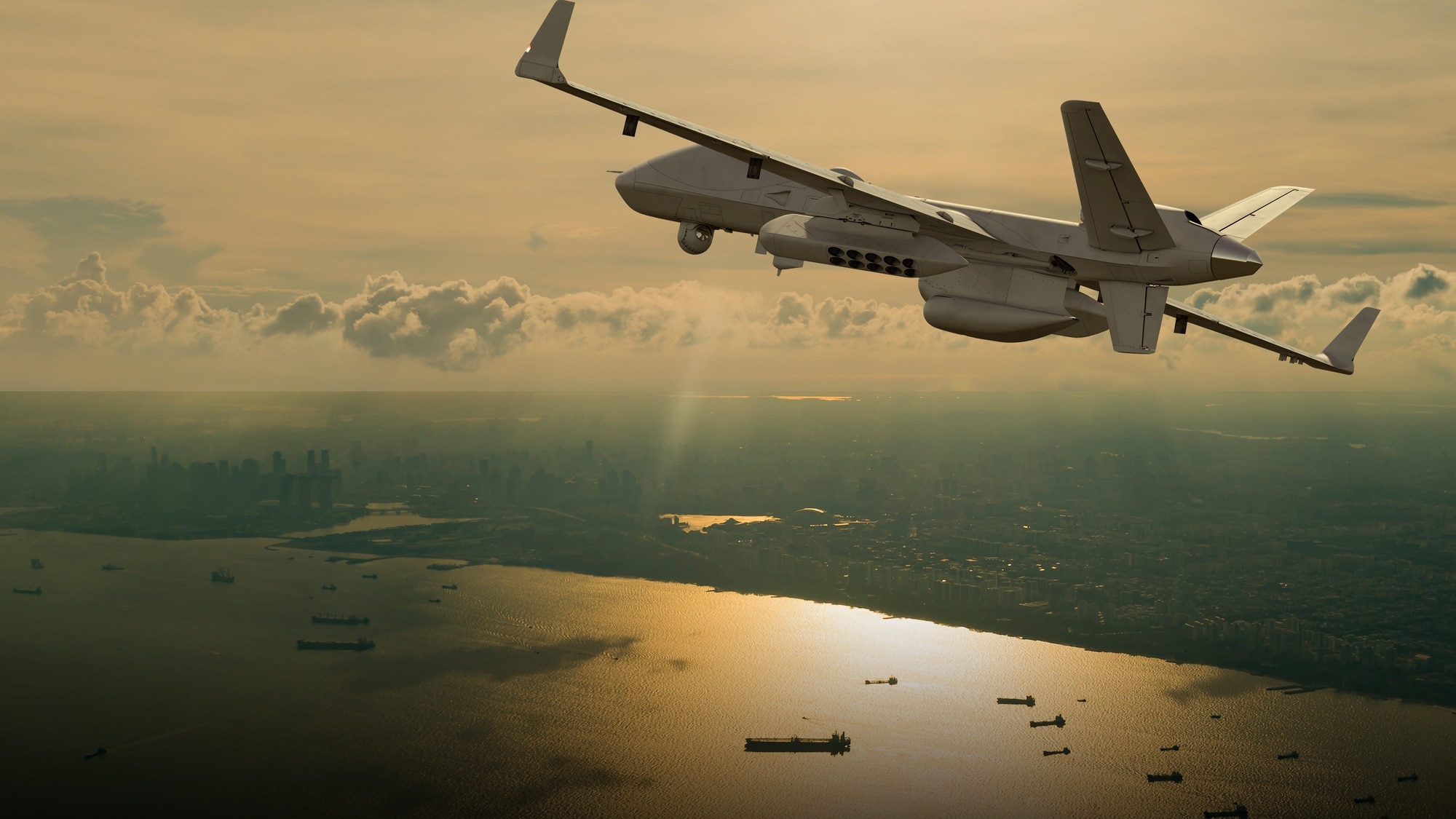 We understand the increasing need for our NATO partners to secure contested areas like the GIUK Gap, which has become a focus of Allied naval strategy. The GIUK Gap is the waterway between Russia’s Northern Fleet and its strategic interests in the North Atlantic and all points south. Russia’s aggressive actions in recent years have reminded us of the importance of transatlantic resolve and of maintaining strong deterrence.

We need to consider areas of vulnerability that have not been in focus following the end of the Cold War. For example, a 2017 report from CNAS cited that 99 percent of our transoceanic communication flows through undersea cables that are highly vulnerable to threat from our adversaries. NATO allies must seriously consider the importance of monitoring and securing these pathways, especially in the GIUK Gap. As we see it, the need for persistent ISR capability on a cost-effective and highly reliable platform has never been greater.

The long-endurance unmanned aircraft that GA-ASI produce can add wide-area, all-weather sensors – like a multimode maritime radar – to NATO’s maritime security and defense. This provides a persistent surveillance capability over water and when combined with a maritime Automated Identification System (AIS) receiver, Electronic Support Measures/Electronic Intelligence (ESM/ELINT) and Communications Intelligence (COMINT), a full picture of all activity is presented, even when there’s cloud cover.

Q. There are also increasing concerns over the Baltic and Black Seas. Do those same capabilities address NATO’s issues in those regions as well?

A. Yes. The Baltic region is perhaps the most vulnerable to Russian military aggression. Any Russian conventional attack on or invasion of Estonia, Latvia, or Lithuania would trigger a response, leading the United States and its NATO allies to take defensive action, further escalating tension between the great power adversaries.

During peacetime, crisis, or conflict in the Baltic region and in the “gray zones” that separate them, NATO’s Joint Intelligence, Surveillance, and Reconnaissance (JISR) capabilities will be critical. Timely, high-quality JISR will be critical in providing political and military leaders with the right tools to accurately assess the threat and to facilitate the decisions neces­sary for a prompt and effective response. Last November, Atlantic Council released a report that discussed NATO’s need to expand ISR and defensive capabilities in the Baltic region in response to the region’s growing vulnerability. State-of-the-art UAS like our MQ-9A and MQ-9B can help allies understand the movements of regional actors and provide context for making fast decisions.

As for the Black Sea, a recent report from CSBA says that Russia could escalate hostilities and further expand its military presence in eastern Ukraine and northern Georgia. That could increase the threat to U.S. partners and NATO allies in the region, and further normalize Russian violations of national sovereignty and disregard for international rules and norms.

A. We’ve seen the Russian Navy emerge with one of the most powerful submarine fleets in the world. NATO allies are faced with addressing a growing threat of undersea warfare while maintaining existing maritime priorities. It’s become one of a navy’s most difficult missions.

GA-ASI is developing ASW capabilities for our UAS to affordably bolster maritime defense in this area. The extended endurance and low cost per flight hour of our UAS are optimal for conducting searches over vast areas that is common for maritime missions. Our UAS can stay on station more than twice as long as manned aircraft providing a solution for maintaining a continuous ISR presence in high priority theaters in the Western Pacific and critical European waterways. In addition, the ability of platforms such as MQ-9A and MQ-9B to deploy sonobuoys to track, detect, deter, and when necessary, engage submarines.

And of course, UAS cost a fraction to buy and operate compared to their manned counterparts. In a recent Defense News article, Bryan Clark, from the Center for Strategic and Budgetary Assessments (CBSA), recommended using UAS to conduct some aspects of ASW due to the inherent persistence and affordability of systems like the MQ-9. Mr. Clark made a similar argument in his June 4th testimony to the house Armed Services Committee’s Subcommittee on Seapower and Projection Forces. We similarly believe the navies of the U.S. and NATO countries should increase the use of UAS with ASW capability across the board. Using manned platforms to conduct command and control, and unmanned vehicles to cover a wide area of surveillance, we could significantly reduce the costs of ASW operations (particularly important in a post-COVID budget environment). This Manned-Unmanned Teaming (MUM-T) would not just perform command and control, but also locate and cue manned platforms to take whatever action is required.

Q. We know countries like the United Kingdom, Italy, France, and Spain – as well as the United States – are operating UAS from GA-ASI, with Belgium and the Netherlands set to acquire MQ-9 variants in the near future. What are the primary advantages of the new MQ-9B platform?

A. There are many. Endurance is always a driver for UAS manufacturers. The MQ-9B can fly for more than 40 hours depending on payload. Delivering this kind of persistent surveillance capability has always been our expertise. We also boast one of the highest mission capable rates across the entire U.S. Air Force fleet, and our aircraft become a force multiplier when teamed with manned platforms like the P-8.

Another important advantage of MQ-9B is its configurability, enabled in part by the system’s “open architecture”. With nine external hard points, operators have the flexibility to configure the aircraft for any number of missions in multiple domain, whether that be maritime capabilities, land based radar, comms relays, or civilian specific payloads such as our NASA-utilized wildfire sensor. MQ-9B is built with a number of new safety enhancements, including lightning protection, de-icing systems and an Automatic Takeoff and Landing Capability. In addition, we are working on new pod development for our platforms that will enable nations to integrate their own sovereign capabilities.

Perhaps most noteworthy, MQ-9B is our first aircraft that we’re building to earn certification to fly in civilian airspace. It’s designed to meet airworthiness requirements. Earning certification and giving a UAS the ability to “file and fly,” just like commercial aircraft, will open up the skies to more missions and higher customer value.

A key enabler to airspace integration and International Airspace is our Detect and Avoid System (DAAS). Our DAAS answers the remote pilot to “see and avoid” other airborne traffic and meets RTCA DO-365 & 366 certification requirements. Utilizing existing ADS-B and TCAS technologies correlated with GA-ASI developed dual AESA Due Regard Radar (DRR) for all weather operations detecting cooperative and non-cooperative intruders. The correlated airborne traffic is downlinked and displayed on our Conflict Prediction & Display screen in the ground control station for pilot maneuvers or automatic maneuvers when required.

I’ll also add that operating MQ-9B, or any GA-ASI aircraft, is very cost-effective. Our aircraft consistently deliver the lowest lifecycle cost, lowest cost per flight hour and lowest operating costs when compared to other aircraft fleets.

We look forward to the first MQ-9B customer delivery to the UK Royal Air Force as part of their Protector program. The aircraft has also been selected by Australia and Belgium, and is being considered by a number of NATO allies. The multi-mission capability of this system is truly game changing. Built for interoperability, we look forward to more partners and allies operating this system in the near future.