ANKARA, Turkey — In May, Turkish President Recep Tayyip Erdogan replaced Prime Minister Ahmet Davutoglu, an Islamist romantic, with Binali Yildirim, a pragmatist like the president. That move has paved the way to reshuffle Turkey’s foreign policy calculus — from assertive, neo-Ottomanism to a realist approach and confrontational line into what looks like a more realistic approach​. 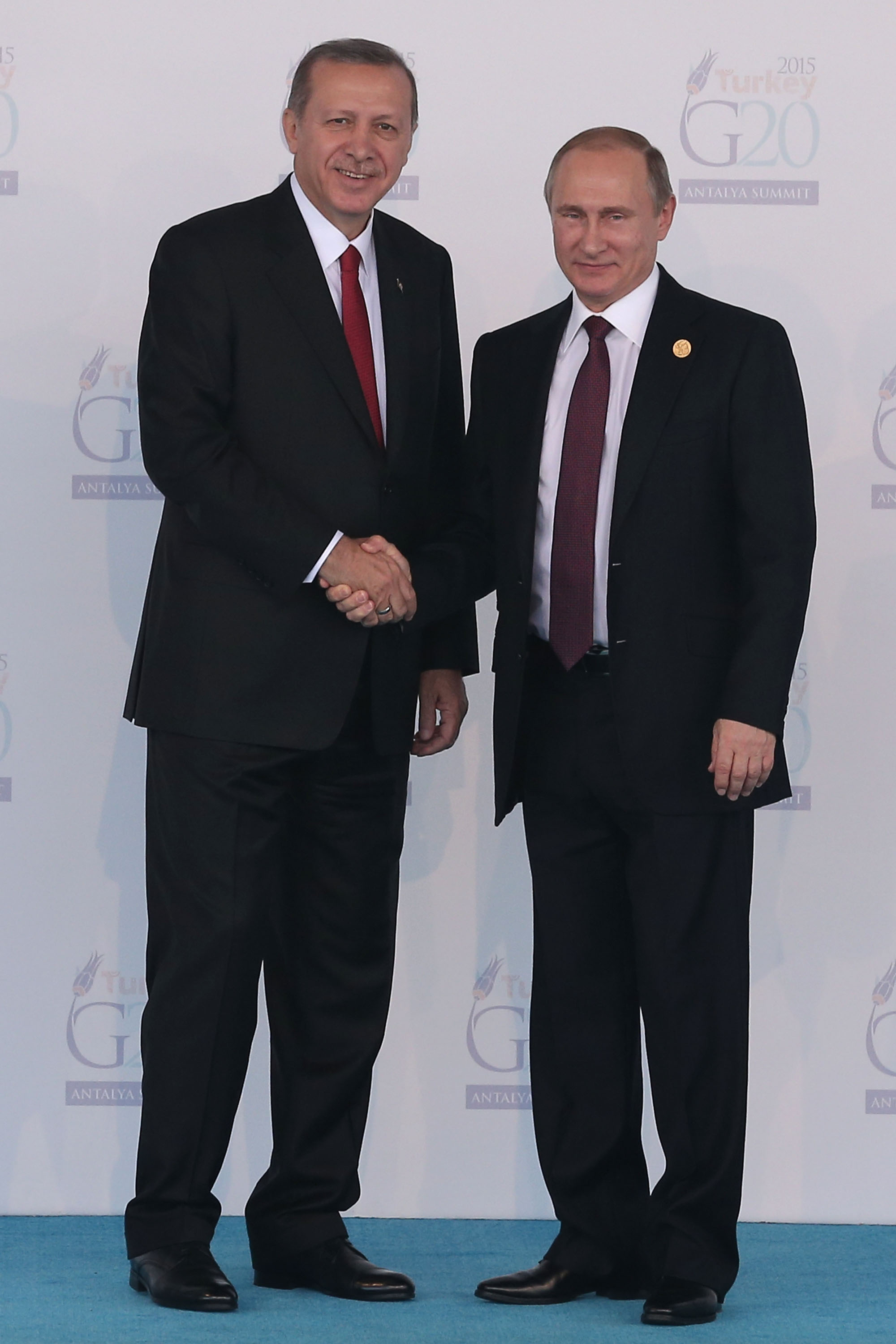 Turkish President Recep Tayyip Erdogan, left, has officially conveyed his regrets to Russian President Vladimir Putin, right, over the Nov. 24, 2015, downing of a Russian warplane, which briefly violated the Turkish airspace along Turkey’s border with Syria.
Photo Credit: Chris McGrath/Getty Images
In June, Turkey and Israel ended their 6-year-old feud and agreed to resume full diplomatic relations. The old allies were dragged into a diplomatic crisis in May 2010 when Israel Defense Forces raided a Turkish-led flotilla that aimed to break the UN-approved blockade of the Hamas-controlled Gaza Strip — an operation that led to the killing of 10 Turkish citizens aboard the Mavi Marmara.

The Turkish-Israeli détente, some industry sources believe, may lead to an Israeli comeback into the lucrative Turkish defense market.

Also in June, Erdogan officially conveyed his regrets to Russian President Vladimir Putin over the Nov. 24, 2015, downing of a Russian warplane, which briefly violated the Turkish airspace along Turkey’s border with Syria. After the incident, Russia froze official ties with Turkey and imposed economically punishing sanctions, including bans of Russian tourist arrivals and popular Turkish resorts. Military ties, including procurement, too, were frozen.

Erdogan’s apology has theoretically mended fences. It also may have repercussions in military procurement.

"There was a de facto [Russian] ban on arms sales to Turkey since the crisis erupted," a senior Turkish diplomat said. "We now expect military relations to resume like normal like in other fields."

Some of the Russian-made Mi-17 helicopters in the Turkish army’s inventory remained idle during the crisis as they needed spare parts and maintenance, but Ankara failed to find a supplier. A list of parts for the Mi-17s, shown to Defense News, call for immediate procurement of 134 different parts in scores of quantities. The Turkish military keeps nearly 20 Mi-17s in its inventory.

Turkish Deputy Prime Minister Numan Kurtulmus gives a statement after a security meeting at the Cankaya Palace in Ankara on January 12, 2016, following a suicide bomb attack in Istanbul's busiest tourist district which killed 10 and wounded 15. Most of the 10 people killed in the suicide bombing in Istanbul are foreigners, Kurtulmus said. He also said the bomber had been identified as a Syrian national born in 1988. / AFP / ADEM ALTAN (Photo credit should read ADEM ALTAN/AFP/Getty Images)
Sign up for our Early Bird Brief
Get the defense industry's most comprehensive news and information straight to your inbox
Thanks for signing up!
For more newsletters click here

Turksih Deputy Prime Minister Numan Kurtulmus said Monday that "no official or unofficial step has been taken on the normalization of the relationship between Turkey and Egypt at the moment."

Since the 2013 change of power in Cairo, Turkey downgraded its diplomatic ties with Egypt. Ironically, a few months before the coup Turkey had opened a credit line of $250 million to Egypt for military procurement financing, which has remained unused since.

"Egypt is a potential market for Turkish arms makers, especially in naval platforms and armored vehicles," an industry source said.

But it is not certain how or when Turkey can mend ties with Egypt after Erdogan’s powerful words of "no reconciliation with coup-makers."

Turkey said Monday that it has not taken any "official or unofficial" steps to normalize its ties with Egypt, calling on the Egyptian government to examine its anti-democratic actions against political prisoners, referring to the Muslim Brotherhood, with which Turkey aligns itself, days after a senior Turkish ruling party official claimed that a delegation composed of two ministers would go to Cairo for talks.

"No official or unofficial step has been taken on the normalization of the relationship between Turkey and Egypt at the moment," Turkey's government spokesman, Deputy Prime Minister Numan Kurtulmus, told reporters after the weekly cabinet meeting Monday.

Kurtulmus’ remarks came in response to a question over whether Turkey was planning to dispatch a governmental team to Egypt as stated by Saban Disli, a senior member of the ruling Justice and Development Party.