BORDUSANI, Romania — The Romanian armed forces showed its capability to perform multidomain battle using naval, land and air power during a river crossing exercise on the Danube as part of the largest military exercise in the region this year.

The U.S.-led Saber Guardian exercise consists of over 25,000 service members from more than 20 allied and partner nations and took place across seven countries, including Romania and Bulgaria.

“In the Army, we talk about multidomain battle, and what you saw today was the Romanian forces executing multidomain battle,” U.S. Army Europe Commander Lt. Gen. Ben Hodges said following the exercise on the banks of the river. He noted after witnessing the exercise that he has “more confidence than I had before today” in the ability of Black Sea countries to carry out complex operations.

The U.S. Army is developing the multidomain battle concept as key to its future operations against near-peer adversaries like Russia, so it makes sense the U.S. Army and its allies would practice how to bring the concept to Europe, where countries are most threatened by the increasingly provocative country to its East.

Multidomain battle surfaced as a capstone concept in 2016, when U.S. Army Chief of Staff Gen. Mark Milley unveiled it at the Association of the U.S. Army’s annual show in Washington.

Since Russians invaded Ukraine and illegally annexed Crimea in 2014, the U.S. Army and its NATO allies have been working to ensure capabilities exist across Europe and particularly in Eastern Europe to defend against any new maneuvers by the Russians to take more land or threaten the stability of the region.

The Romanian military, over the course of less than two hours on July 16, showed it can seamlessly push off the enemy and build a defense in order to facilitate a river crossing of combat vehicles using capability across all domains.

Lt. Gen. Nicolae Ciuca, Romania’s chief of defense, told Defense News after the exercise, that Romania has “revitalized all of the equipment. We have also trained all of the leaders on how to plan and how to coordinate this operation.”

The Romanian general added, “I think [Hodges] was impressed by our river flotilla equipment. He did not have any knowledge of that.”

Hodges later told Defense News in an interview in Bulgaria, “The Romanian river crossing was such an impressive display of capability that, honestly, I didn’t know they had.”

“When you see Romanian Navy river ships, Danube flotilla, out there providing direct support and gun fire or SHORAD for the crossing site, I thought, ‘Wow, what a bright idea. Why didn’t I think of that?’” he said. “Because it never occurred to me that they’d have large enough craft like that that can move up and down the Danube river because that’s never been my thing to worry about. But now, big rivers in Europe, that is obviously a part of the environment.”

Before the start of the exercise on the Danube, Romanian naval vessels designed for the river — essentially a brown water Navy — were in position near the almost-complete pontoon float bridge built during the middle of the night.

The last piece of the bridge was saved for emplacing to show those observing the exercise how the bridge will come together but would have been finished under the cover of darkness using night vision capability, according to Col. Jeff Shoemaker, who leads training and exercise coordination for U.S. Army Europe.

Overnight, the near and far side of the river was secured using Romanian assault forces to push back the enemy forces to a range where friendly forces could not be hit by enemy machine gun or short-range artillery fire, Shoemaker said before the start of the exercise.

Romanian fighter jets to include F-16s flew over the river at the start of the event, providing close air support to the troops on the ground that had secured both sides of the river and to suppress fire for a round of paratroopers about to drop in. Romanian paratroopers then jumped into a landing zone on the opposite bank of the river to continue to prevent the enemy from regaining territory and to prepare for the crossing of combat forces on vehicles.

The Romanians even included an electronic warfare element to degrade enemy command control and communications in the exercise and incorporated two medical evacuation procedures among several other activities to make the exercise increasingly intricate.

Throughout the exercise, light-assault vessels zipped across the river carrying troops; armored vehicles swam the river; and, once the last piece of the bridge was put in place, Romanian armored vehicles, its Gebhards and U.S. Strykers from the 2nd Cavalry Regiment crossed over.

Choosing the Danube for the exercise was also strategically relevant to the region.

“The Danube is like the Autobahn,” Hodges said. “It’s like the great highway for commerce for so many different nations.”

Part of the reason Romanians are concerned about what Russia has done in the Black Sea and Crimea, Hodges said, “is you start getting closer and closer to the Danube river delta, and then you start affecting potential security and commercial impact on the Danube river, which is obviously vital for Romania and Bulgaria.”

The exercise directly shows how the Romanians and allied nations would be able to address the protection of the vital waterway should its security be threatened using an all-encompassing strategy, leaders at the exercise emphasized. 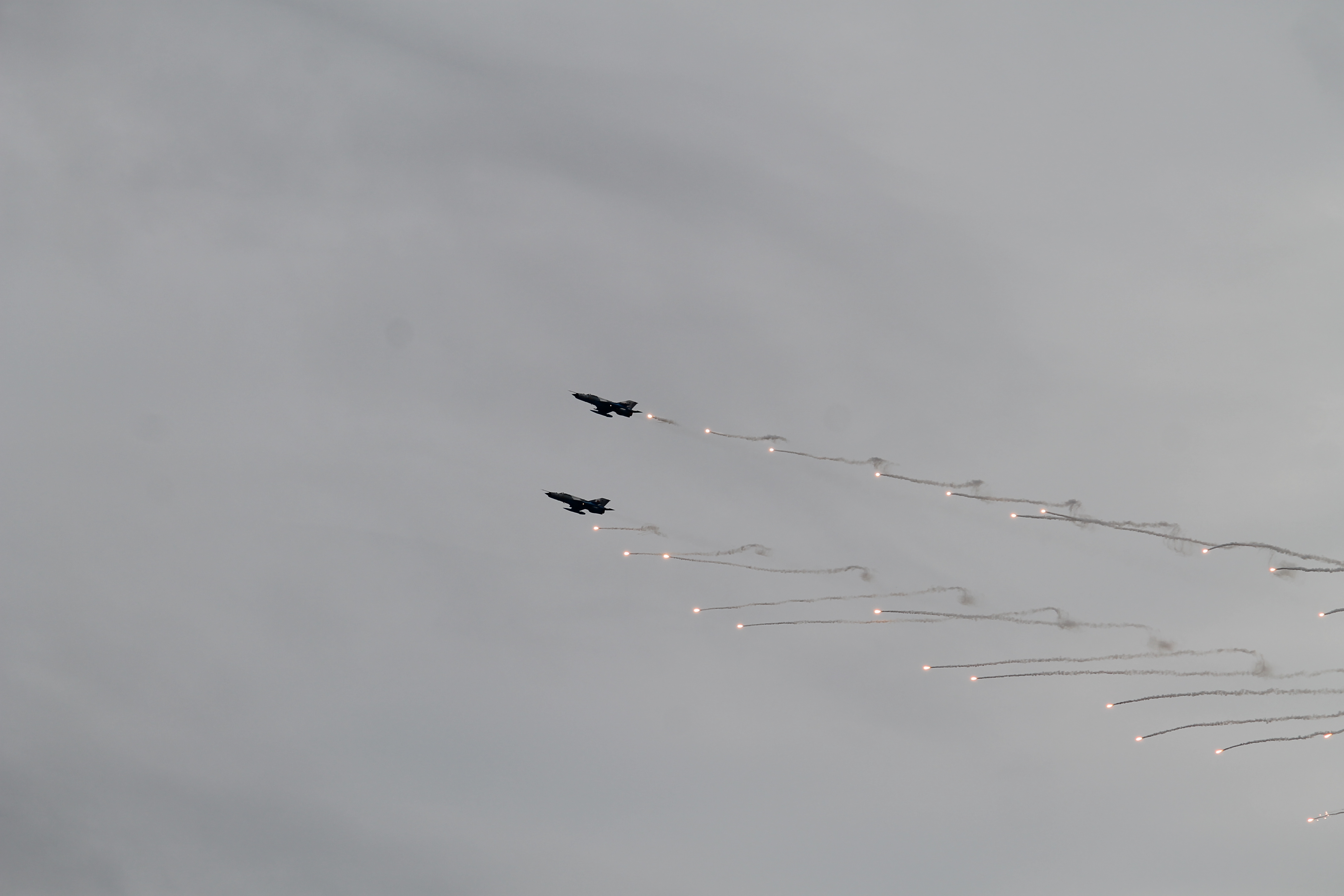 The Romanian armed forces conduct a river crossing exercise on the Danube as part of the U.S. Army Europe’s Black Sea region exercise Saber Guardian. Overnight, Romanian units secured both sides of the river, pushing enemy forces out of machine gun and artillery fire range and built a pontoon float bridge across under the cover of darkness. One bridge section remained, and the bridge was completed during the exercise on the morning of July 16. (Jen Judson/Staff)
2 of 23 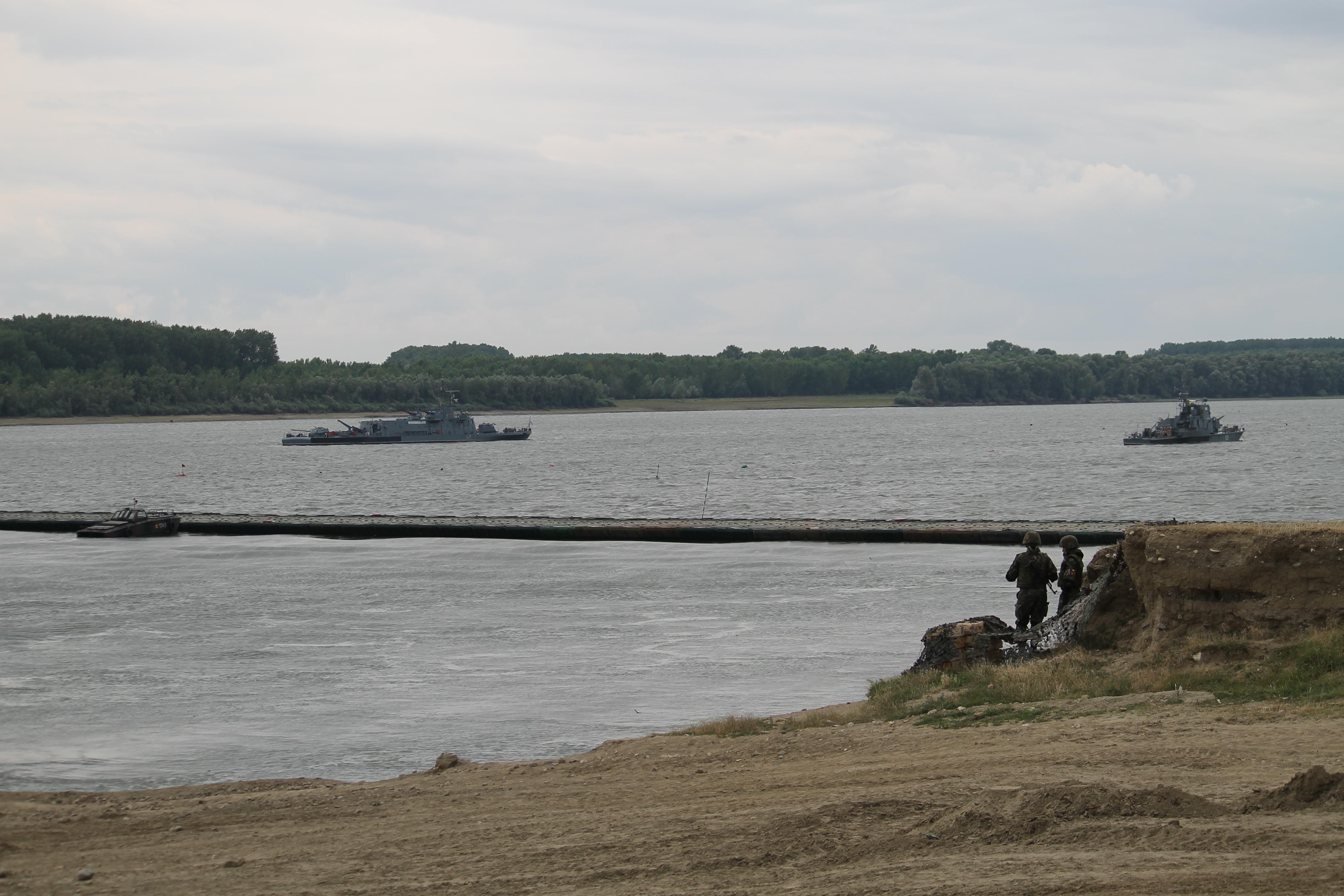 Romanian MiG-21 Lancer fighter jets kick off the exercise, providing air support to fend the enemy off and out of the areas on the opposite side of the river now occupied by friendly forces. The entire hour-and-a-half exercise was conducted using Romanian military capability in a multidomain battle scenario. (Jen Judson/Staff)
3 of 23 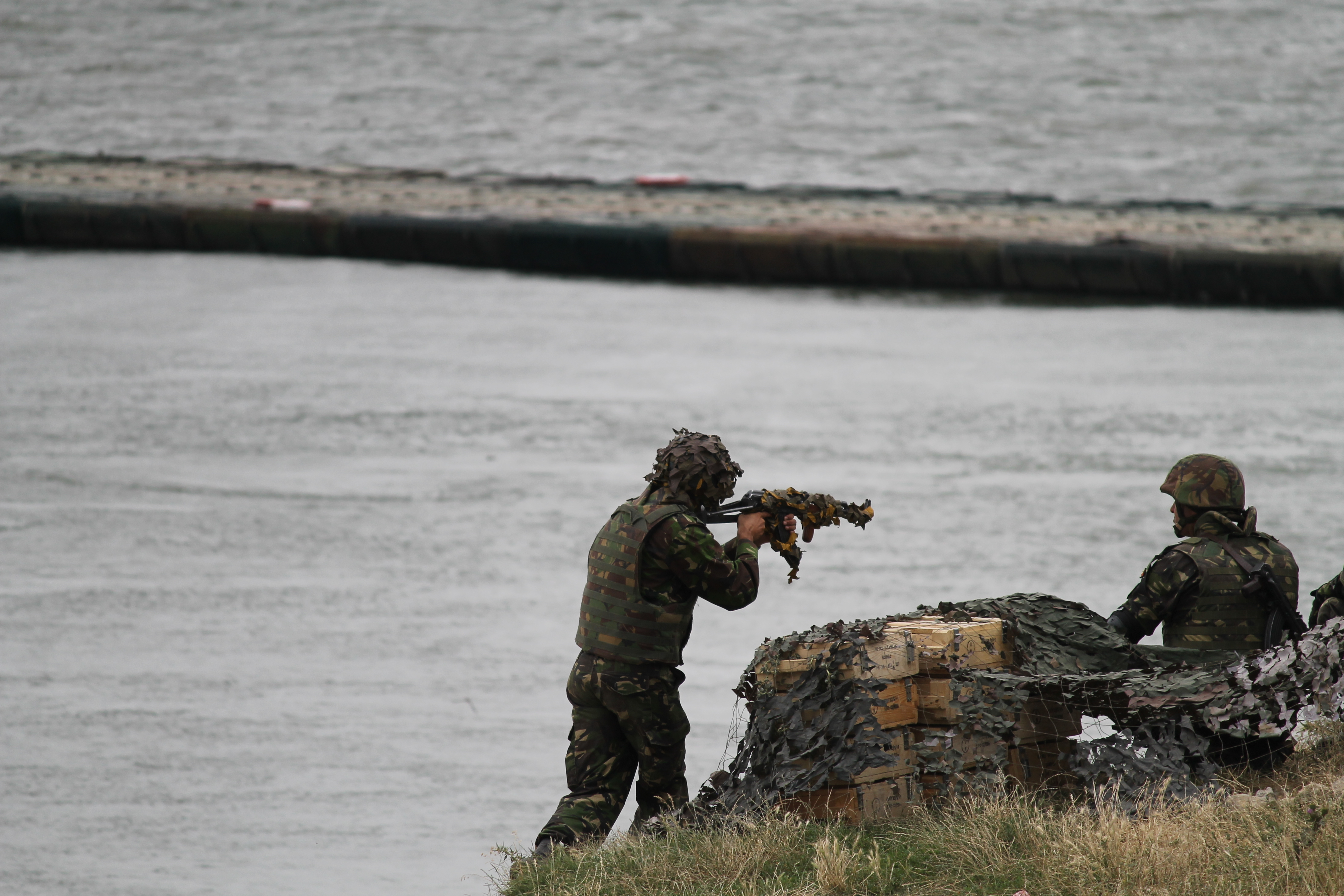 Troops from Romania defend the banks of the Danube and the bridge erected overnight as the exercise heats up. (Jen Judson/Staff)
4 of 23 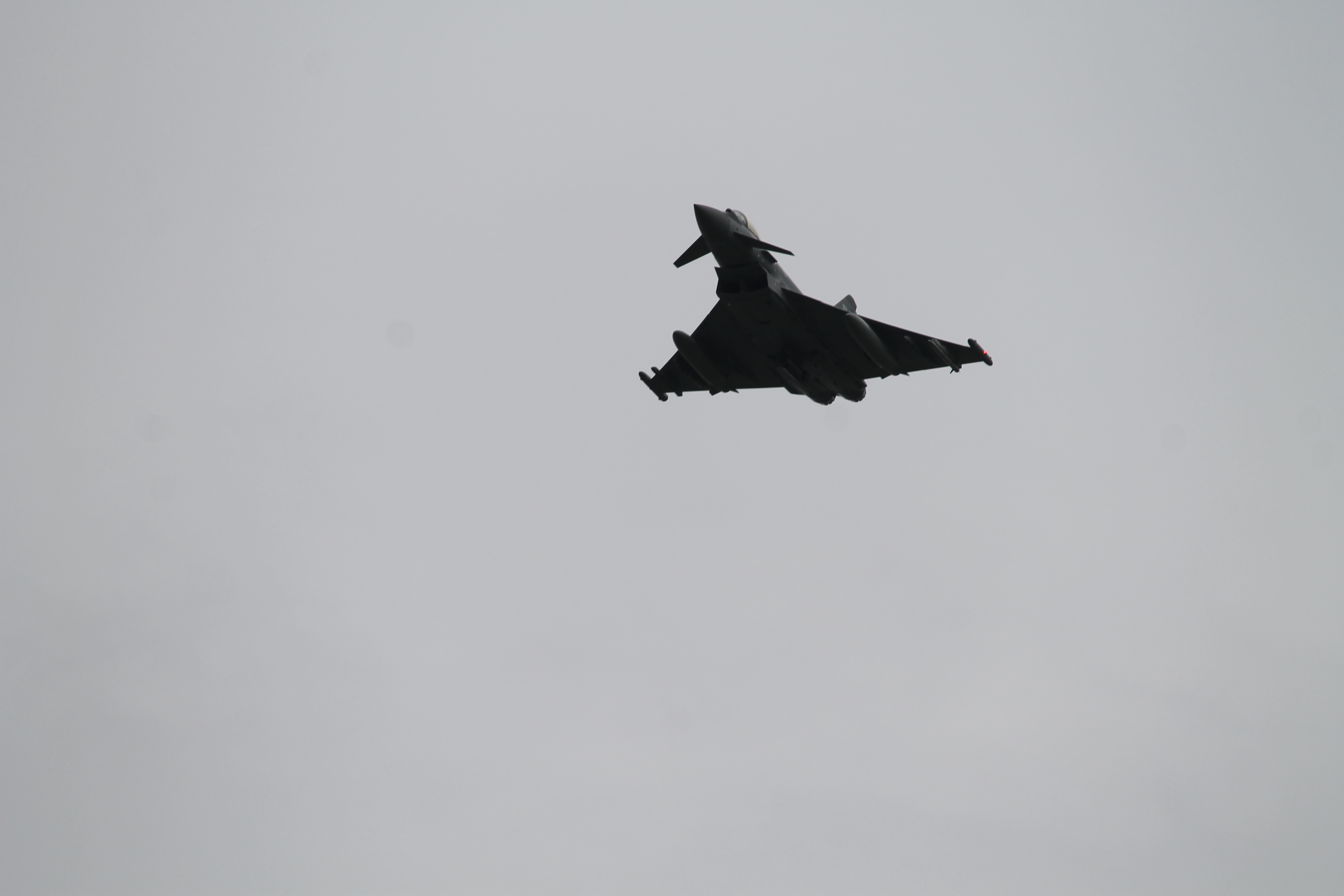 A Eurofighter Typhoon jet soars over the bridge on the Danube. (Jen Judson/Staff)
5 of 23 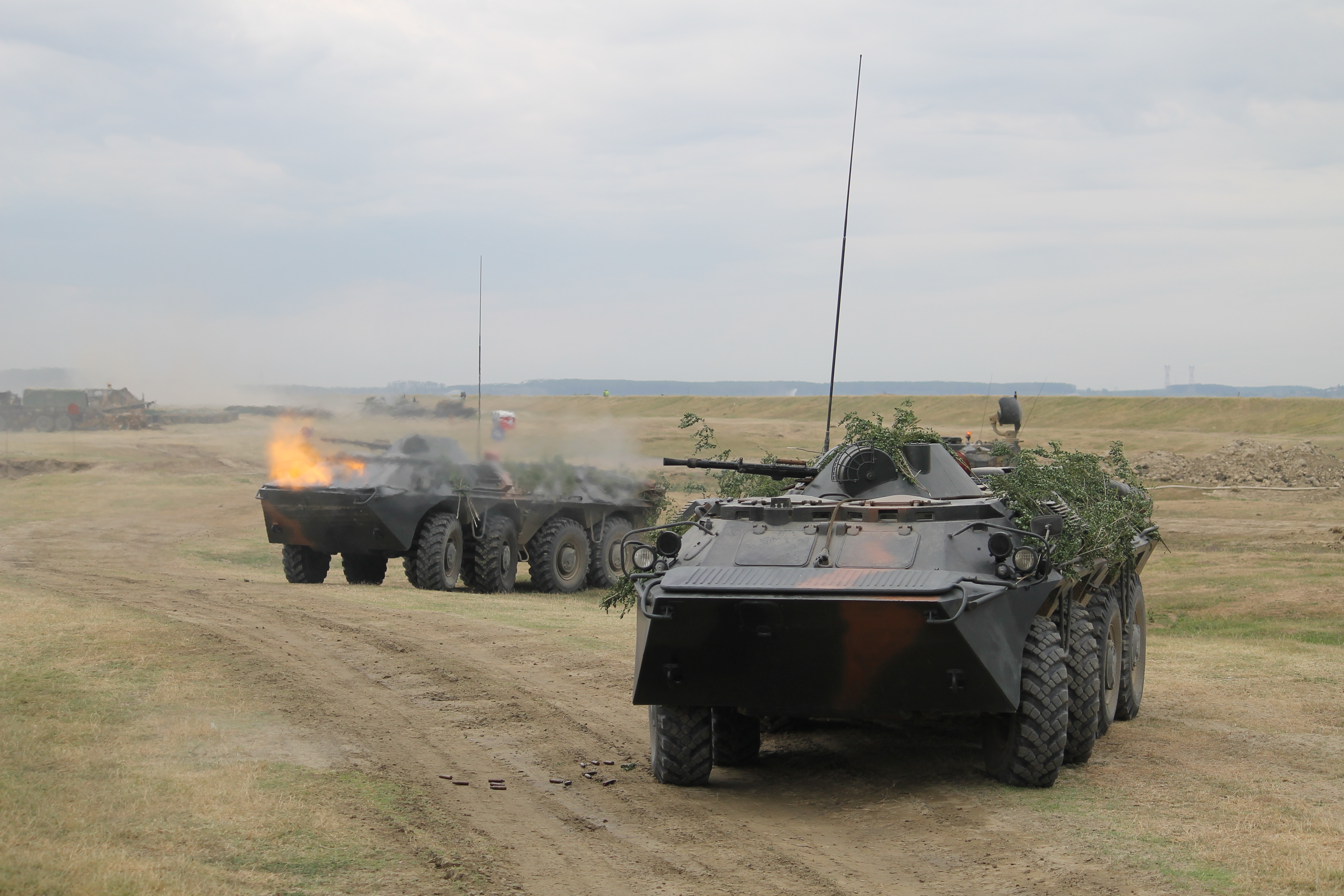 Romanian Zimbru armored personnel carriers firing on the banks of the Danube continue to beat back enemy forces and to secure the bridge for Romanian troops, other combat vehicles and U.S. Stryker fighting vehicles from the 2nd Cavalry Regiment to cross the river later in the exercise. (Jen Judson/Staff)
6 of 23 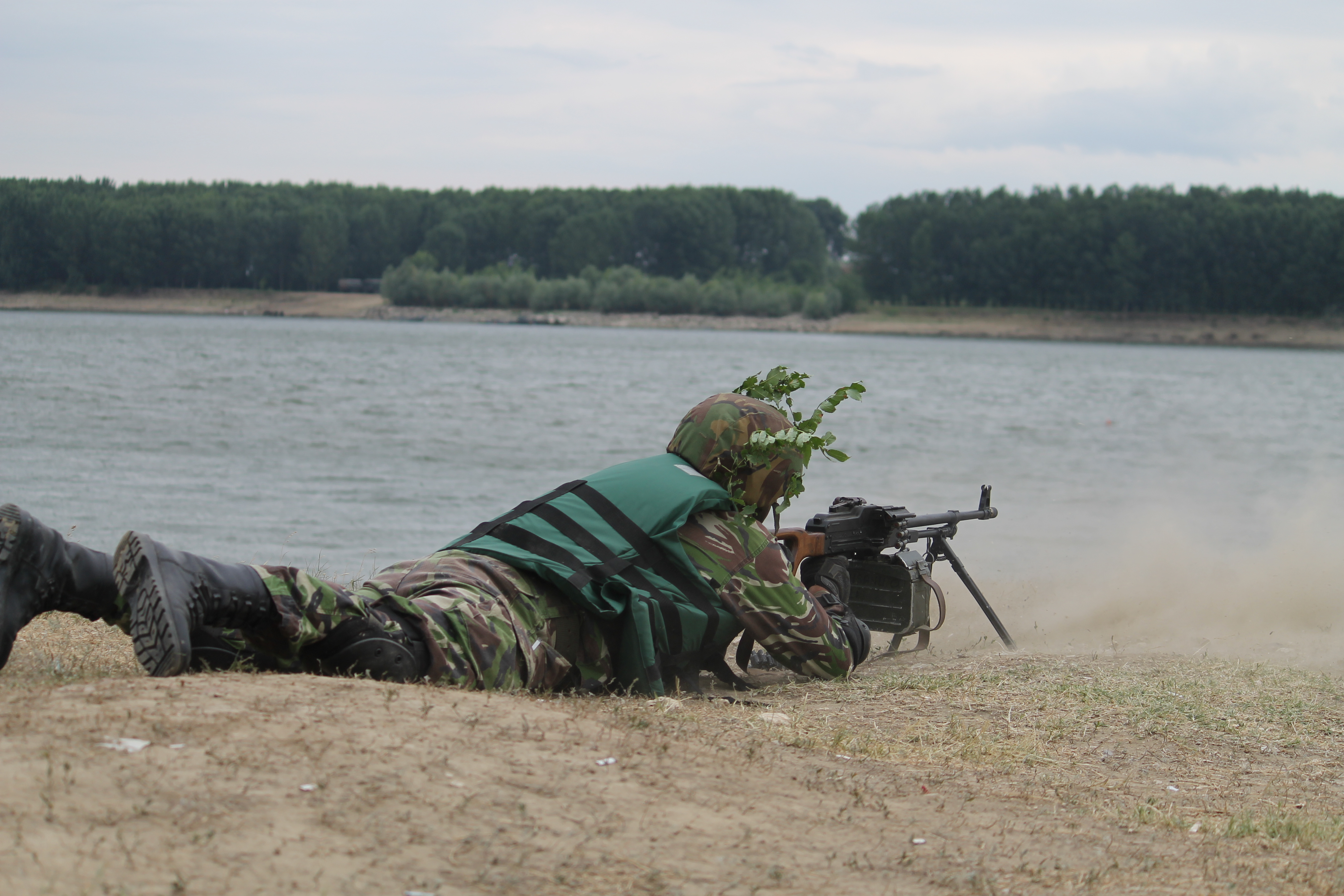 A soldier fires, providing cover for troops attempting to cross the Danube with a high-speed boat. (Jen Judson/Staff)
7 of 23 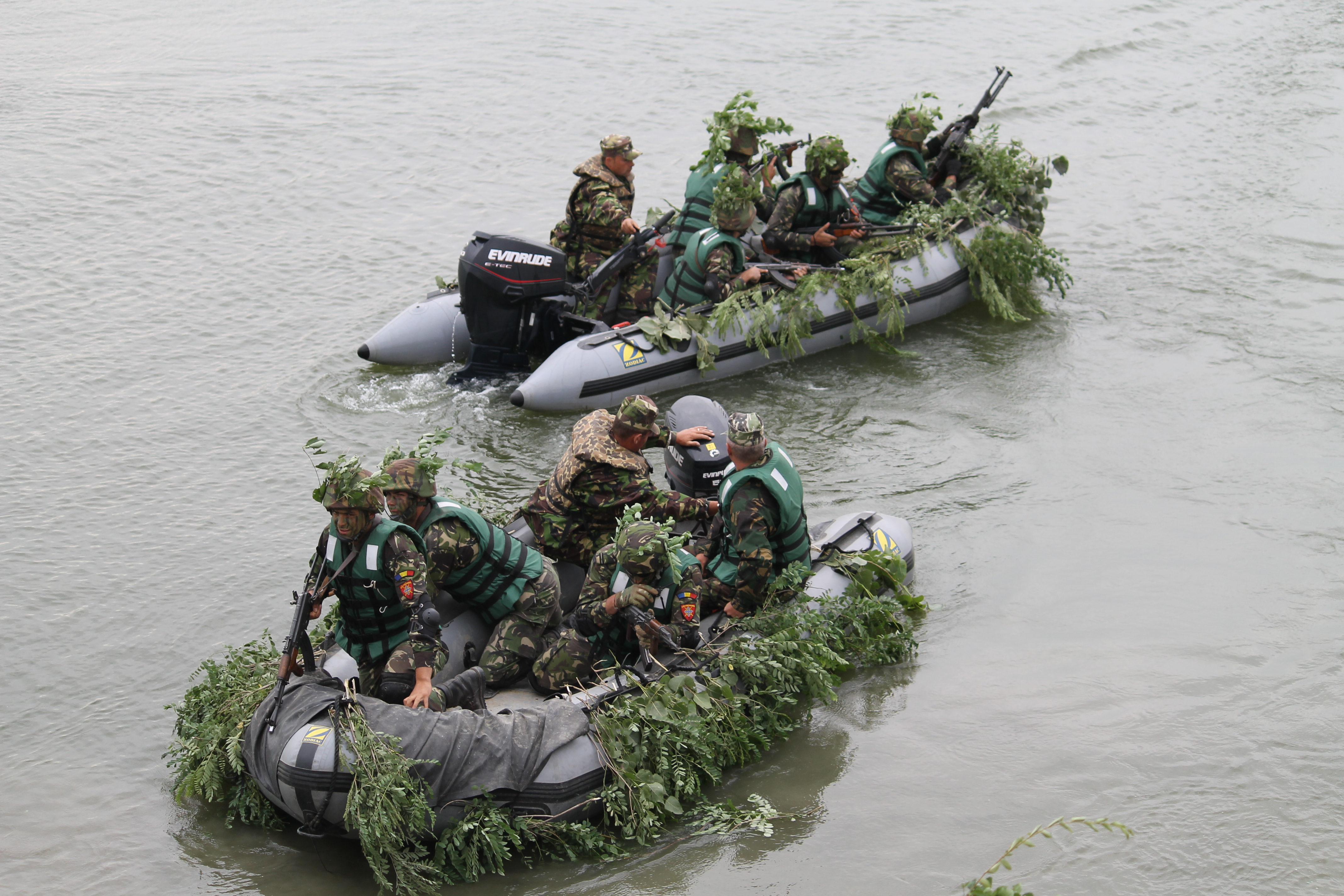 Well-camouflaged Romanian troops load into high-speed rafts within seconds on the side of the Danube and begin the short journey across to support friendly forces on the other shoreline, fending off enemy advances. (Jen Judson/Staff)
8 of 23 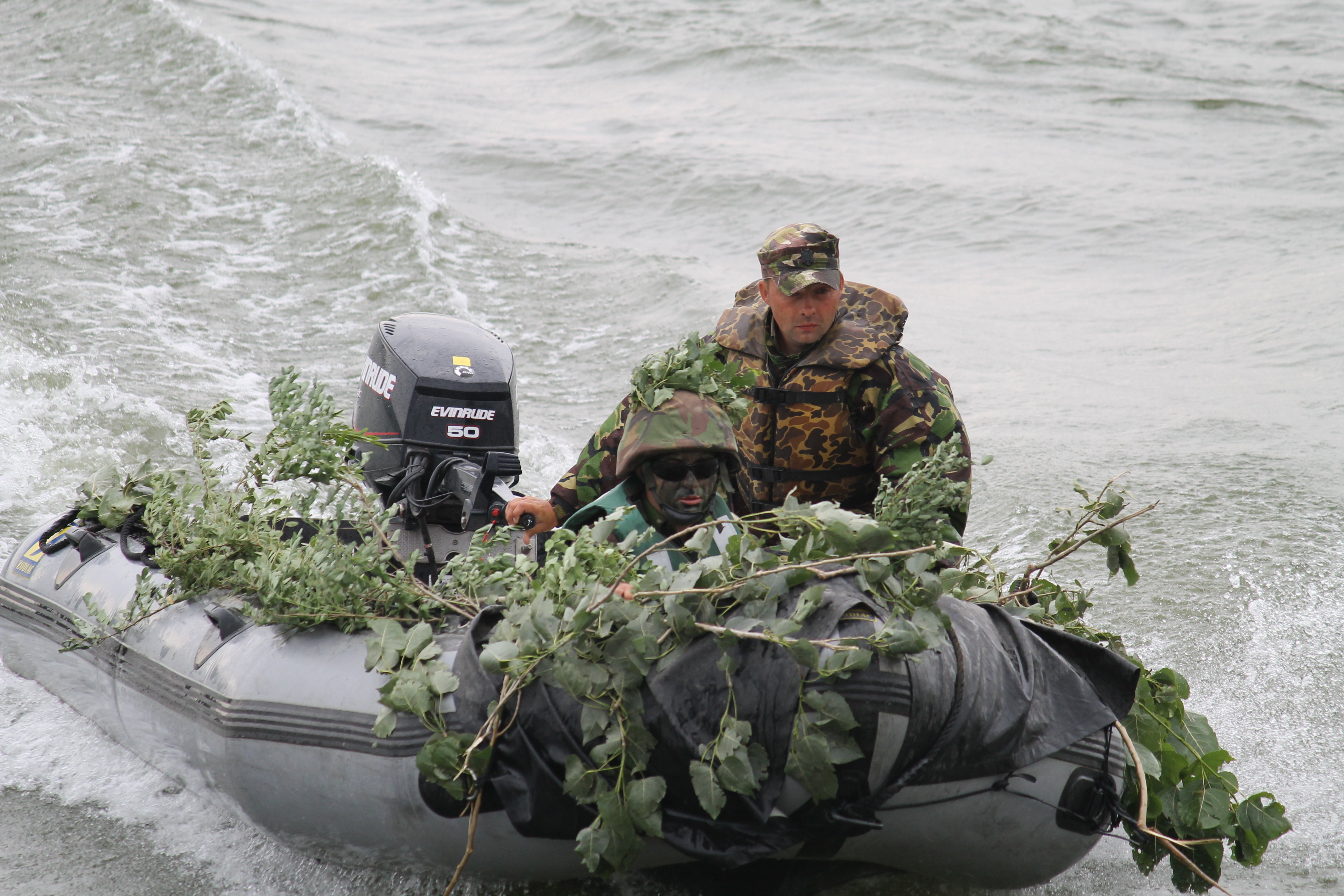 A camouflaged raft zips across the Danube, picking up more troops to carry back. The process of moving units across the river several times took just a few minutes. (Jen Judson/Staff)
9 of 23 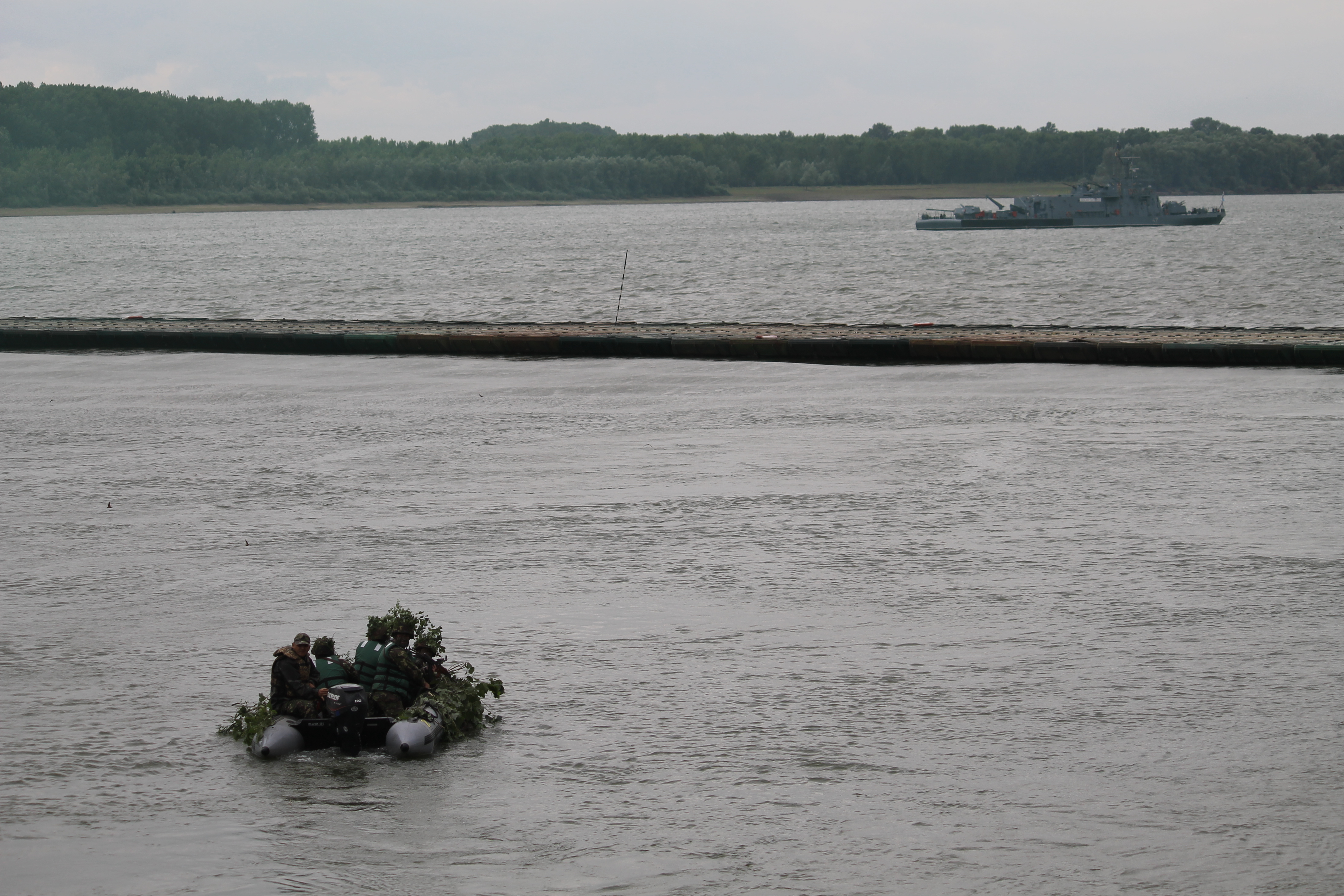 The river crossing exercise was a solid example of a multidomain battle, U.S. Army Europe Commander Lt. Gen. Ben Hodges said following the event. While fighter jets flew overhead, combat vehicles and short-range air defense systems fired on the shores, and rafts zipped back and forth, carrying troops across the Danube. Several river flotilla from the Romanian Navy were positioned to protect the bridge and the shores. (Jen Judson/Staff)
10 of 23 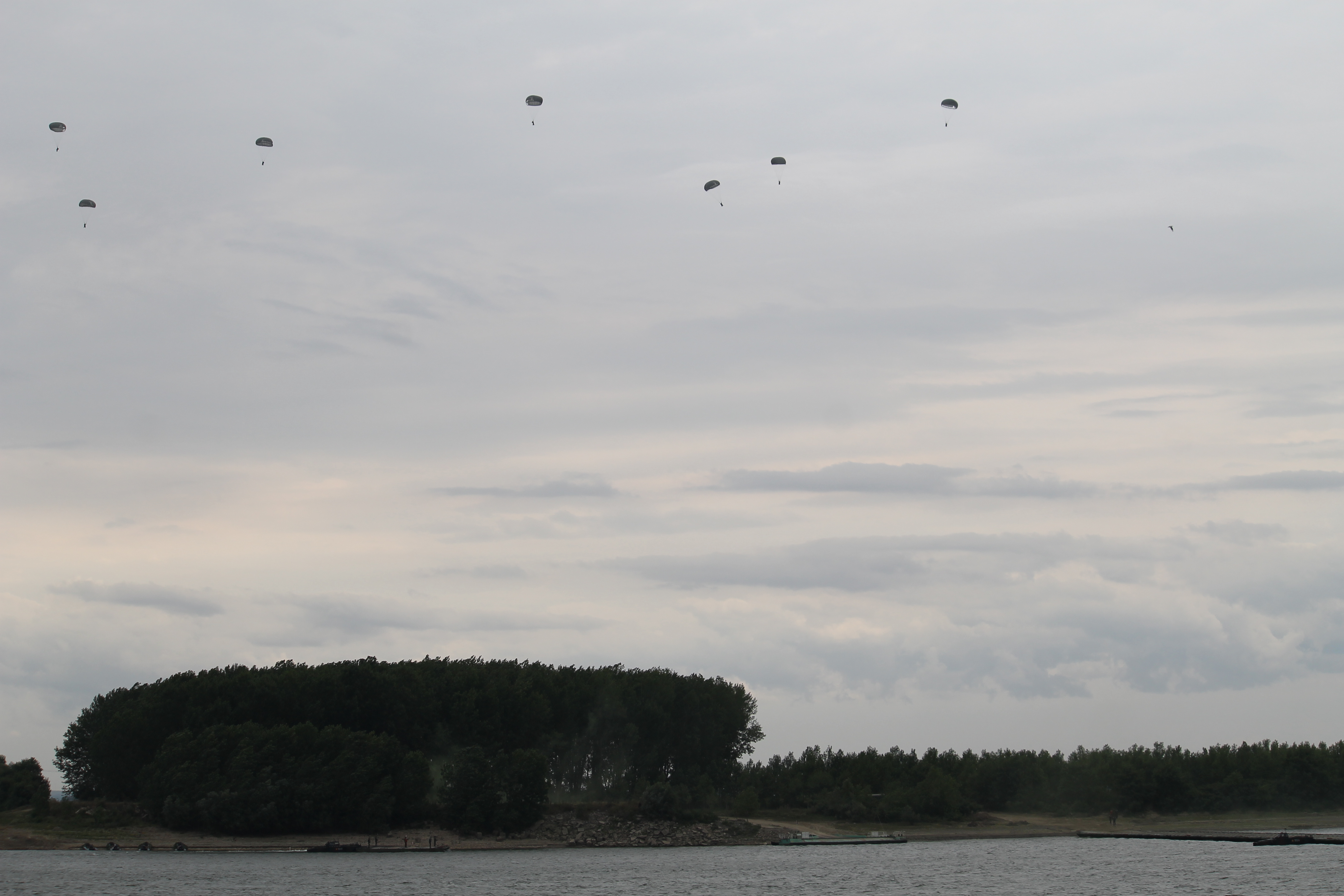 Romanian paratroopers practice their skills at the river crossing, jumping from C-130s and dropping on the side of the Danube where enemy forces were still attempting to regain lost territory. Normally, the entire operation would have occurred at night, but for the sake of showing off skills in an exercise, they practiced during the day. (Jen Judson/Staff)
11 of 23 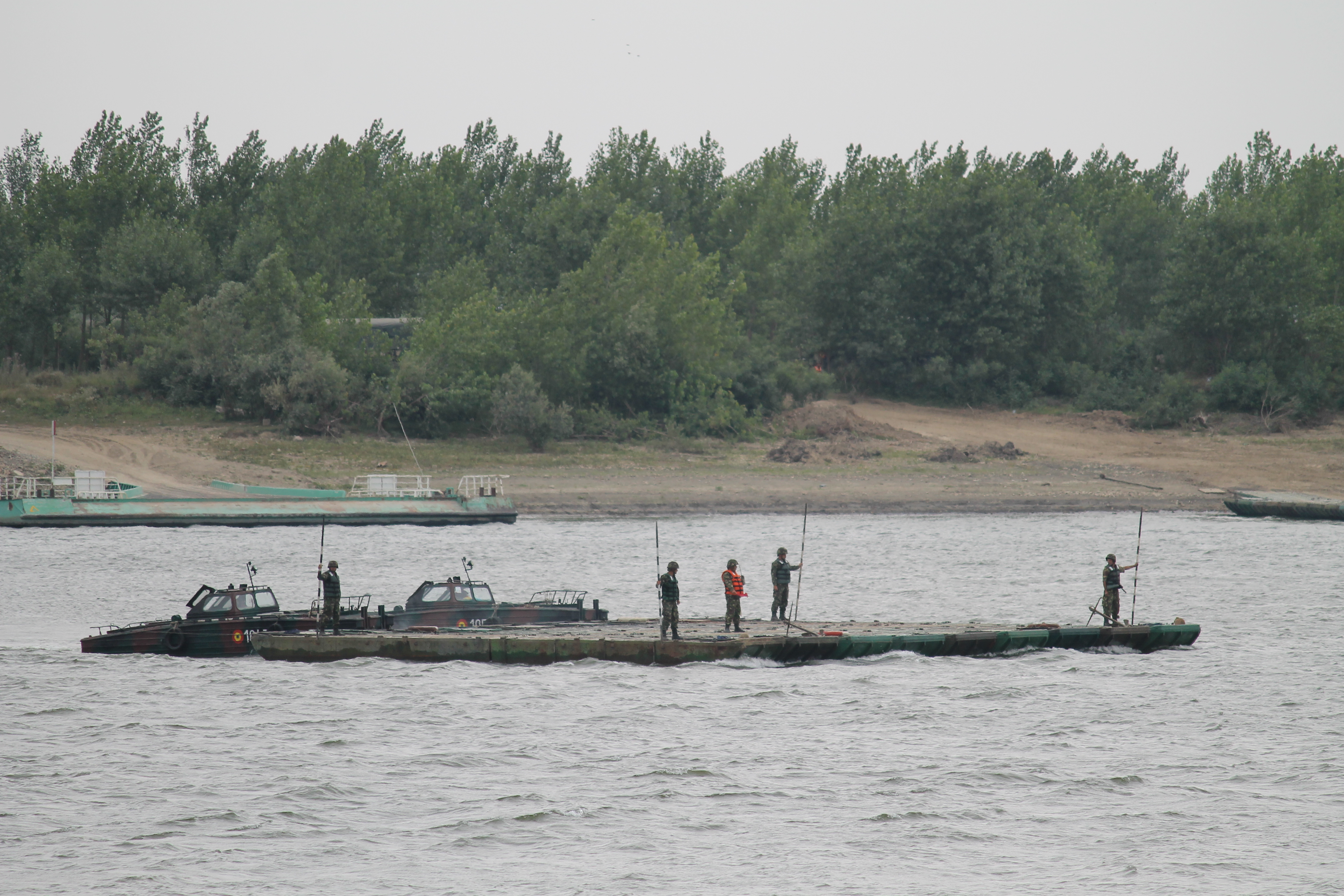 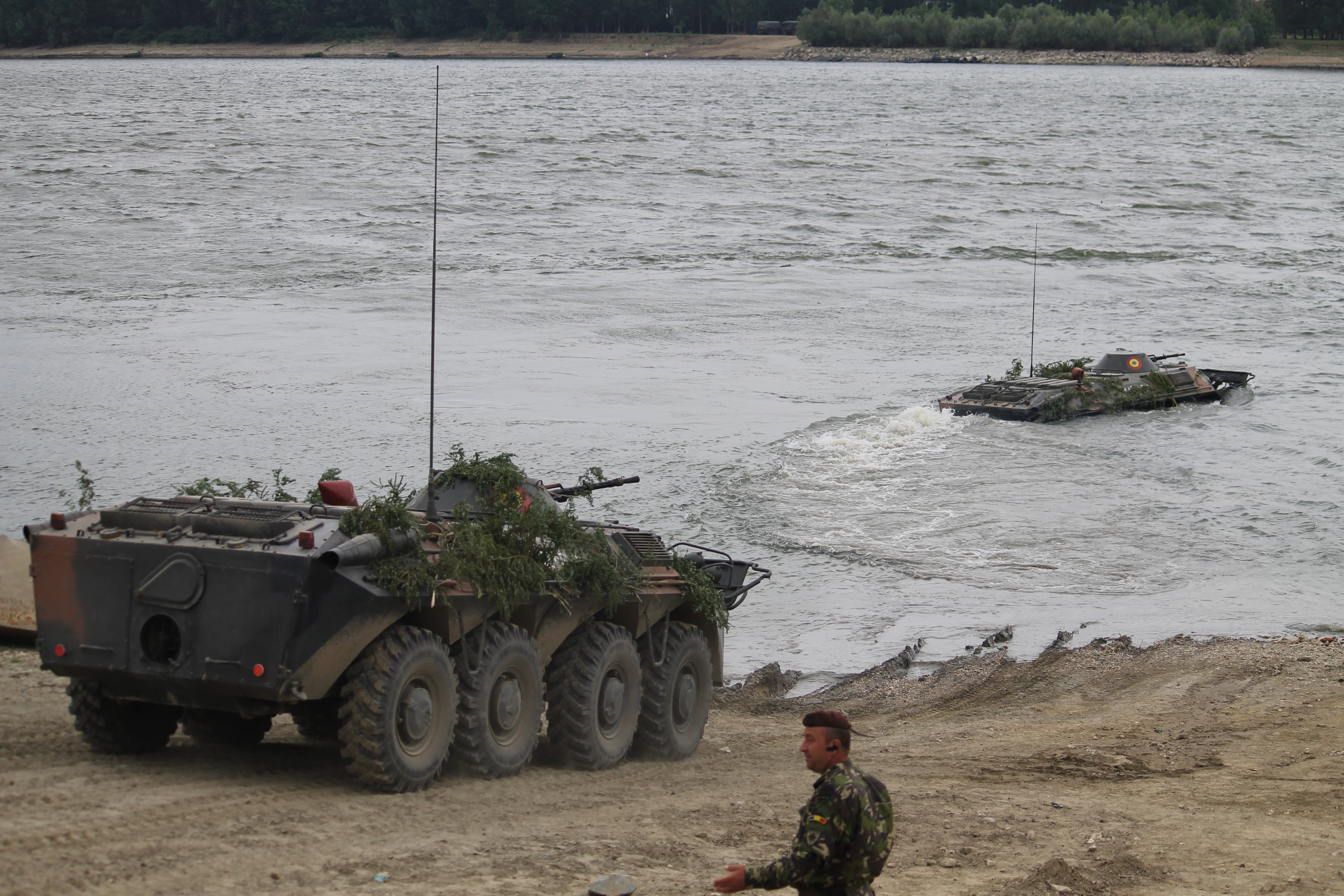 Romanian BTR armored vehicles move into the river as troops fire their guns. Using armored vehicles to swim the Danube is a move the Soviets developed in the Warsaw Pact and practiced regularly. The Romanians brought back the capability during the exercise using an entire company of BTRs. (Jen Judson/Staff)
13 of 23 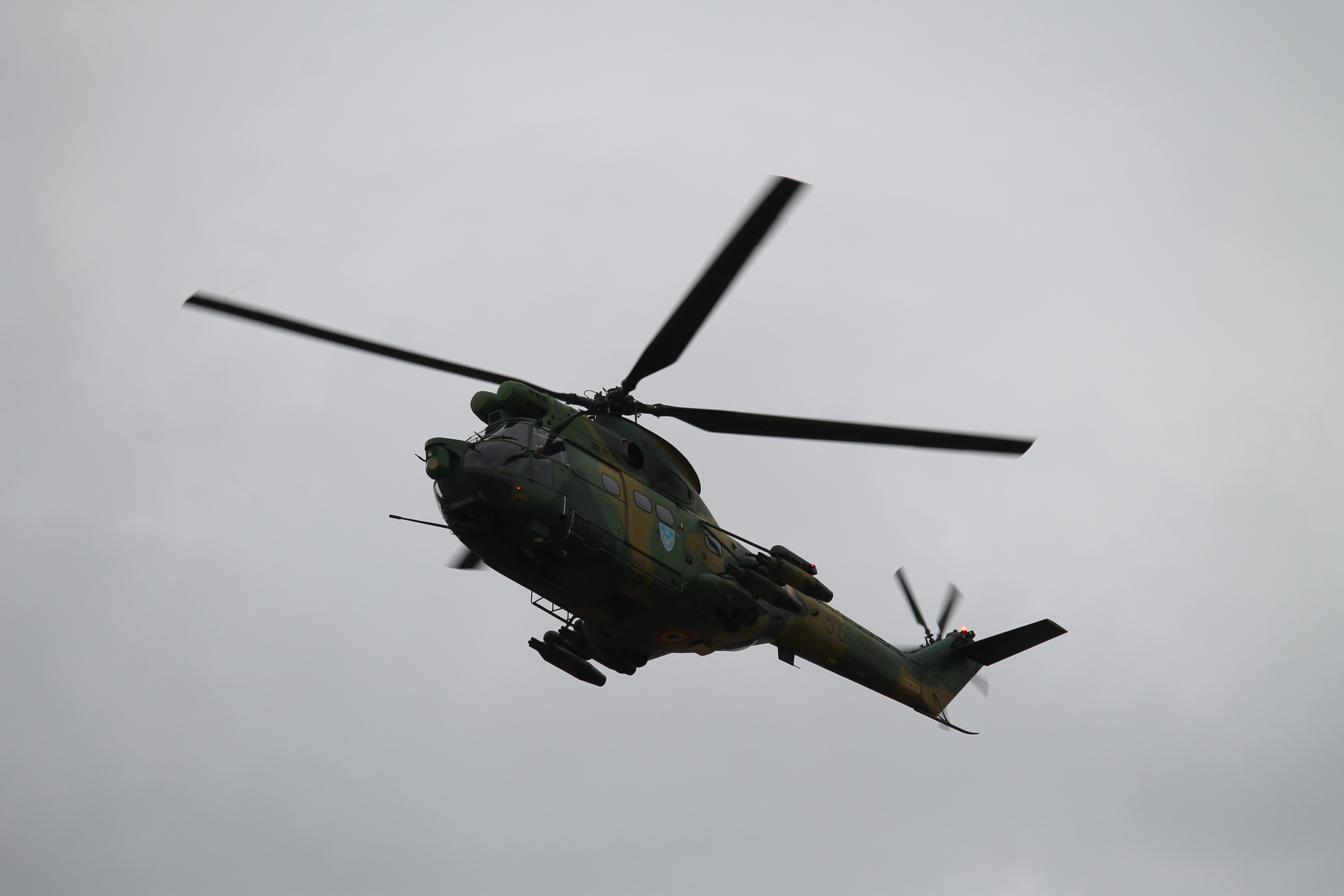 A Romanian-manufactured Puma helicopter continues to provide support for ground troops preparing to cross the bridge. (Jen Judson/Staff)
14 of 23 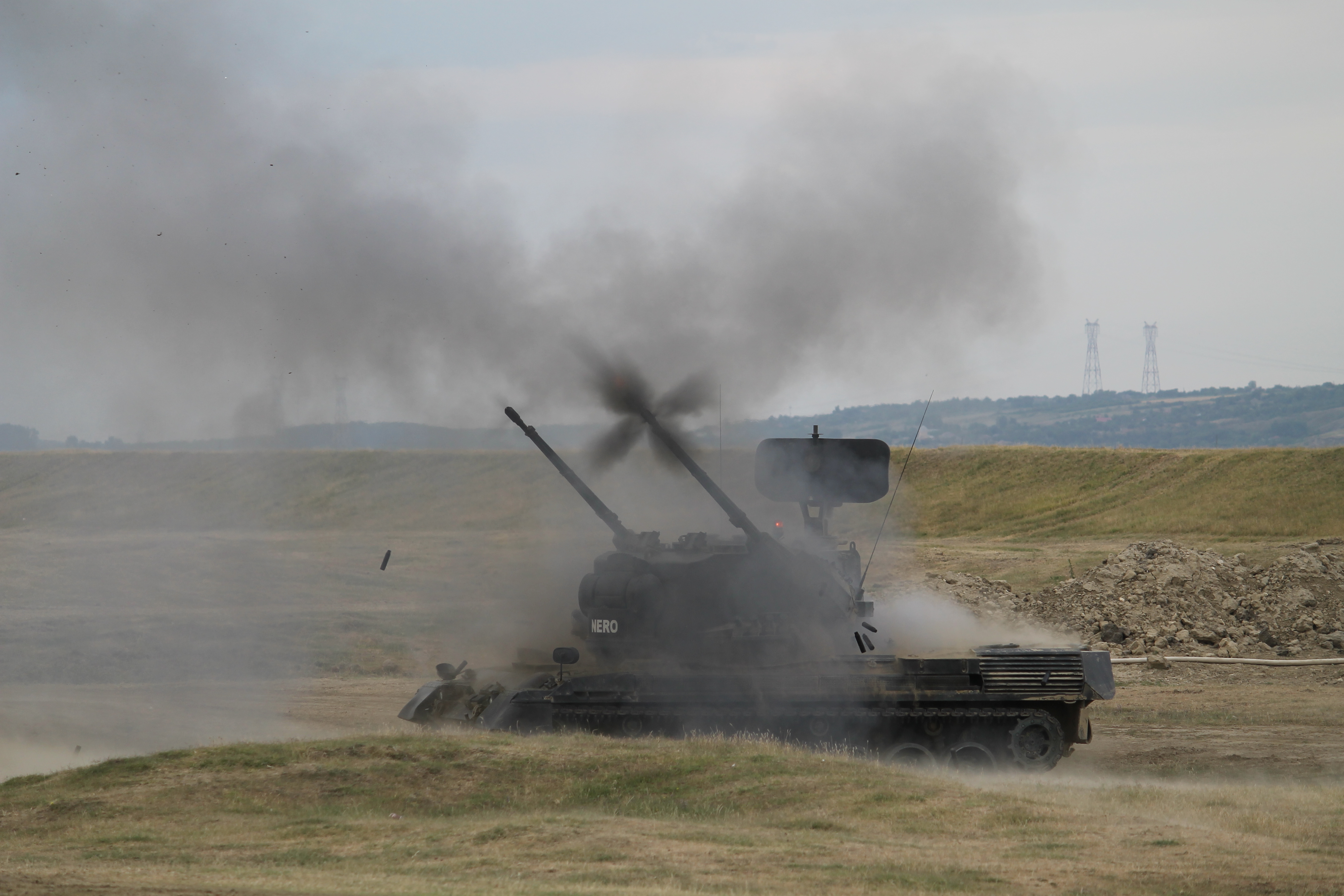 A Gepard short-range air defense system fires on the banks of the Danube. Romania was provided systems from Germany and now it’s a critical system as countries in the region seek to deter Russian aggression. Lt. Gen. Ben Hodges, U.S. Army Europe commander, has lamented the lack of SHORAD capability in the U.S. Army. To shore up the gap in Europe, some National Guard Avenger units will deploy on a rotational basis starting this fall. Countries like Romania with resident SHORAD capability also help to fill that gap. (Jen Judson/Staff)
15 of 23 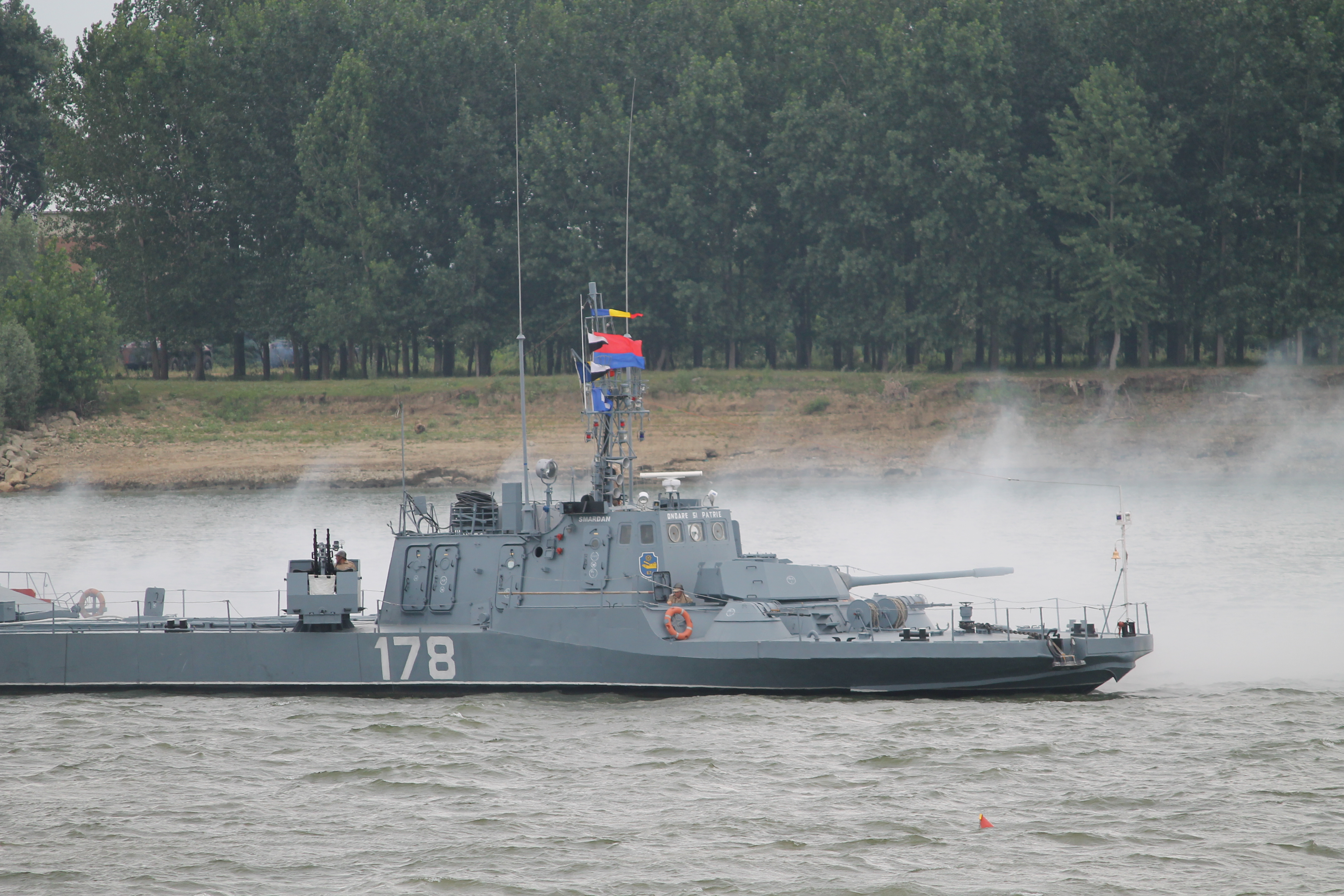 A river flotilla present at the exercise show in Romania has a strong brown-water navy capability, which impressed Lt. Gen. Ben Hodges, U.S. Army Europe commander, who said after the exercise he didn’t even know Romania had such a capability and thought it was vital for protecting critical waterways like the Danube. (Jen Judson/Staff)
16 of 23 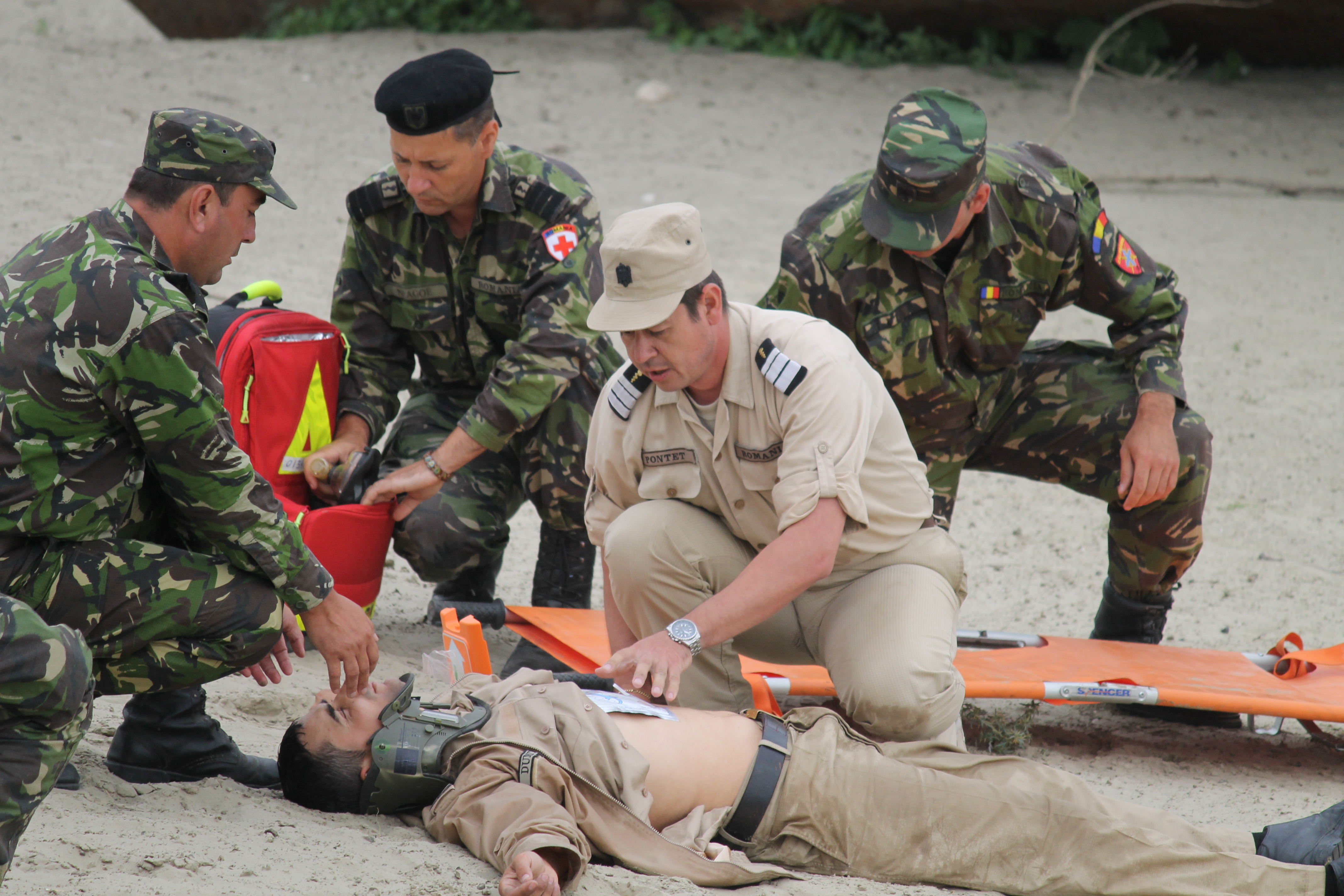 Romanian medics practice responding to an injured sailor from one of the navy ships in the river. A raft rescued the sailor, simulating an injury and brought him to shore, where he was treated and whisked away in a medical vehicle. The river crossing exercise also simulated a mass casualty event and corresponded with a mass casualty exercise at nearby Mihail Kogalniceanu Air Base, where the personnel feigned injuries to allow military medics from Romania, the U.S. and the Balkan Medical Task Force to practice high-level triage skills. (Jen Judson/Staff)
17 of 23 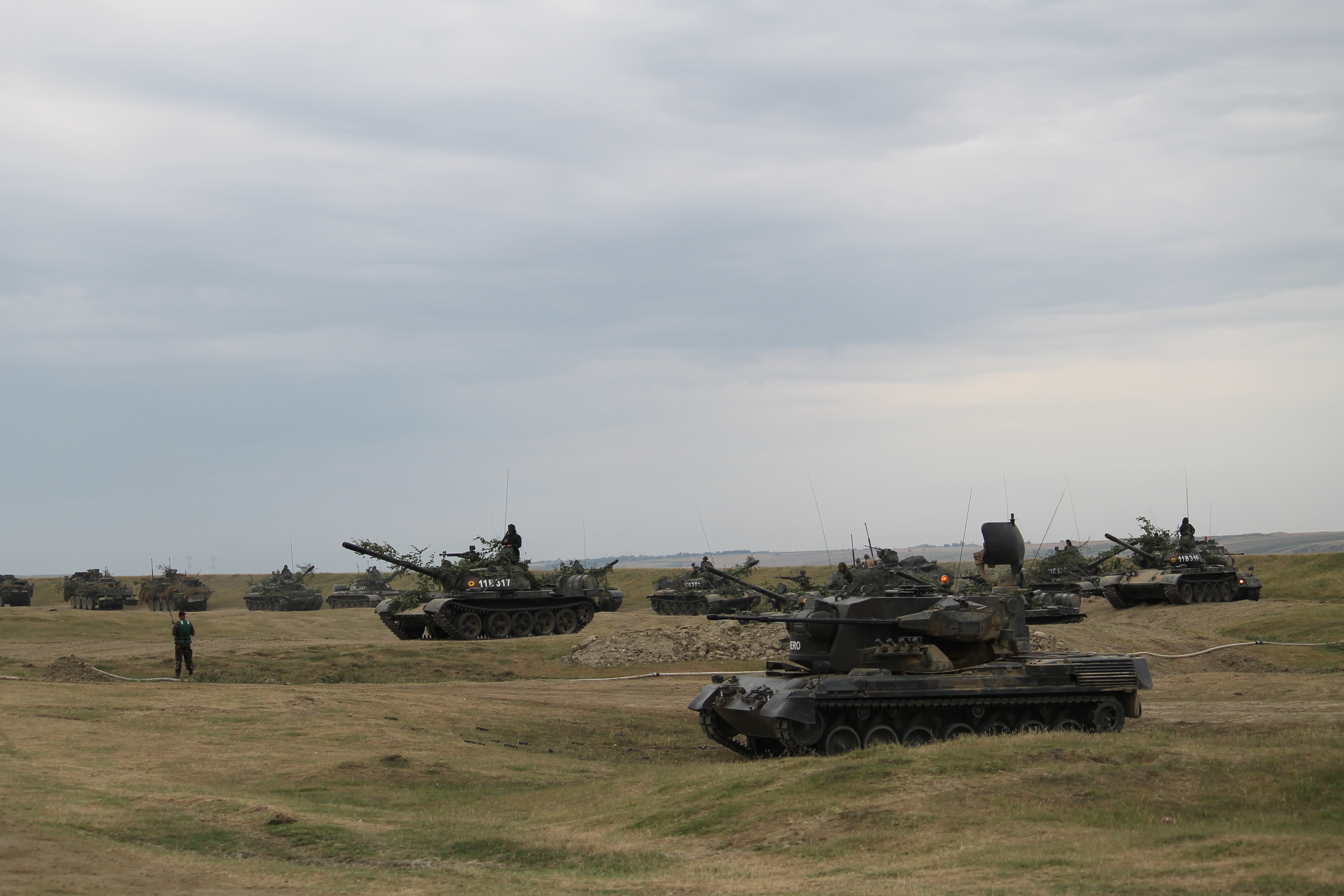 A Gepard in the foreground continues to scan the skies for threats while Romanian tanks and U.S. Strykers begin to line up on the beach in order to cross the bridge. (Jen Judson/Staff)
18 of 23 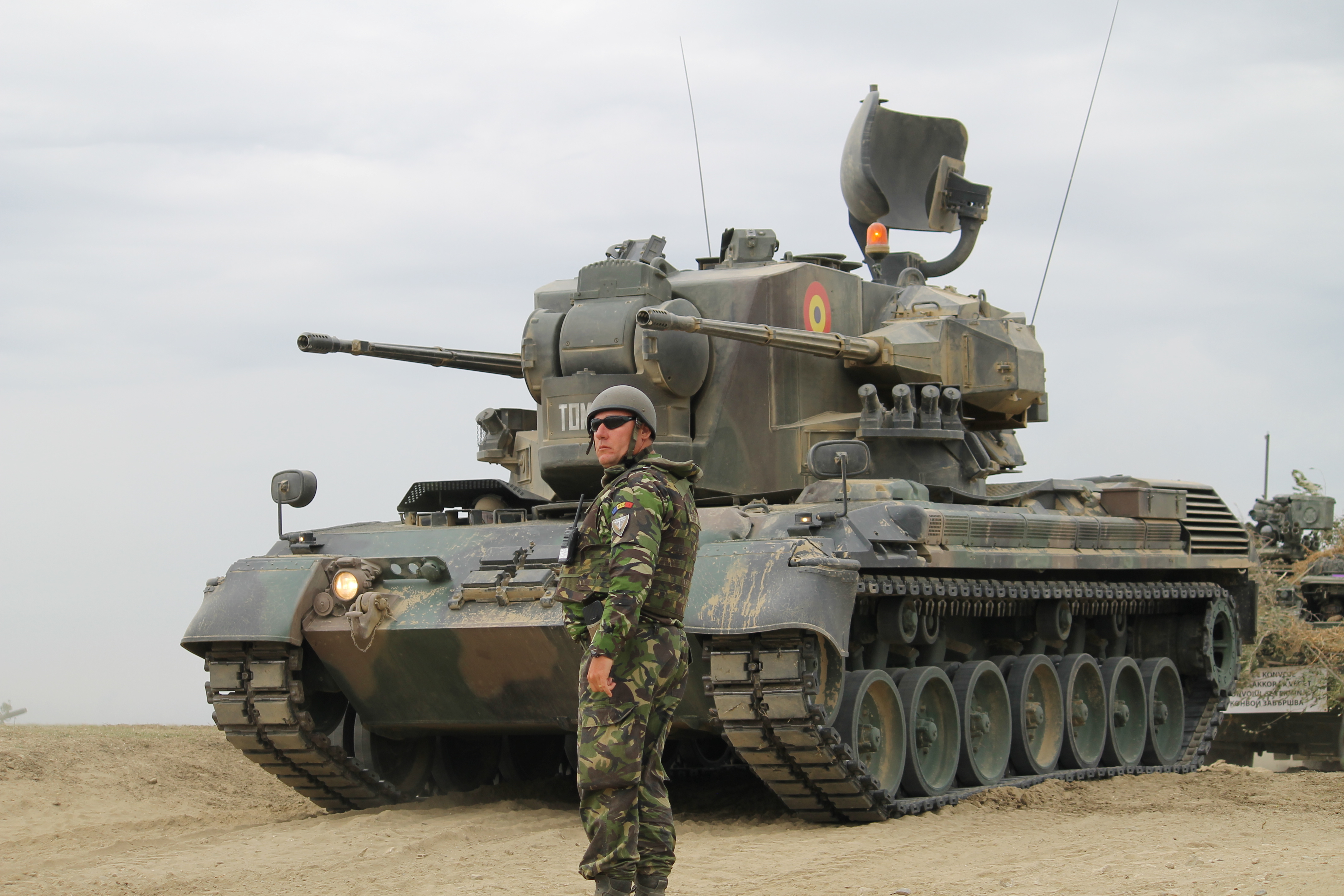 A Gepard is one of the first to cross the bridge during the river crossing exercise. (Jen Judson/Staff)
19 of 23 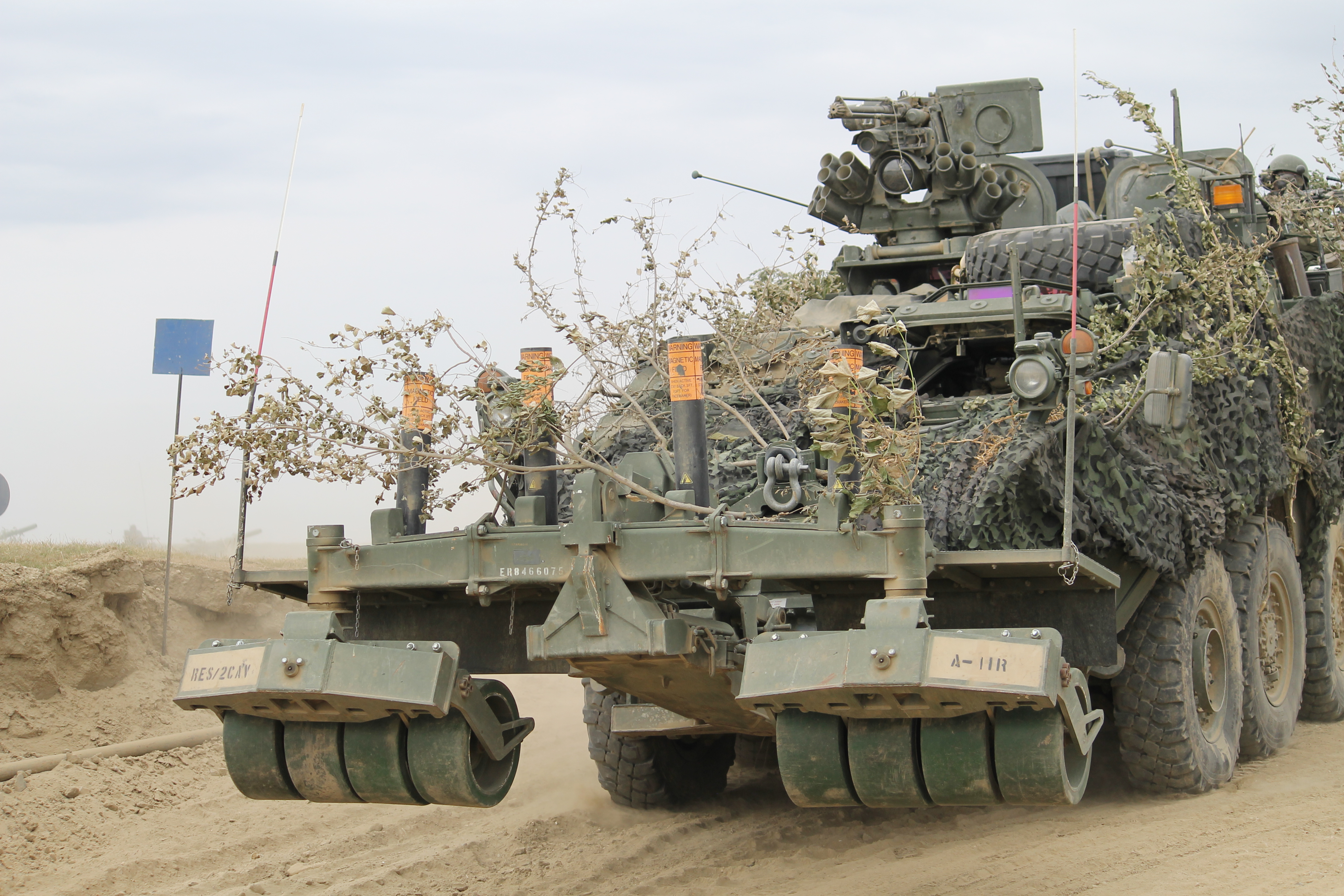 A U.S. Stryker outfitted with a counter-improvised explosive device capability prepares to cross the river. The Stryker crossing was the only U.S. participation in the exercise. (Jen Judson/Staff)
20 of 23 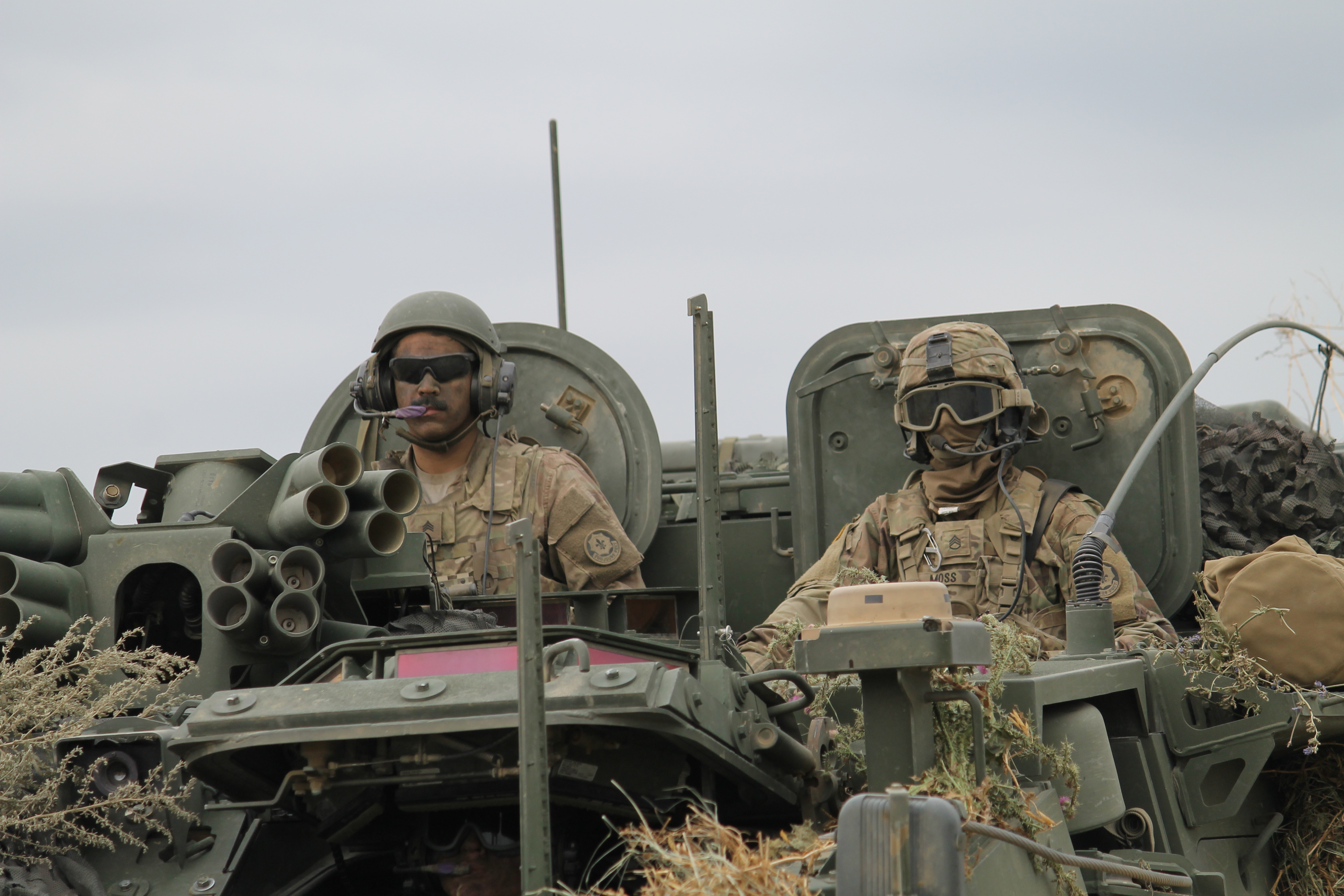 U.S. Stryker operators prepare to drive the vehicle onto the pontoon bridge after Romanian forces have used a variety of capabilities within a multidomain battle scenario to secure the area for the crossing. (Jen Judson/Staff)
21 of 23 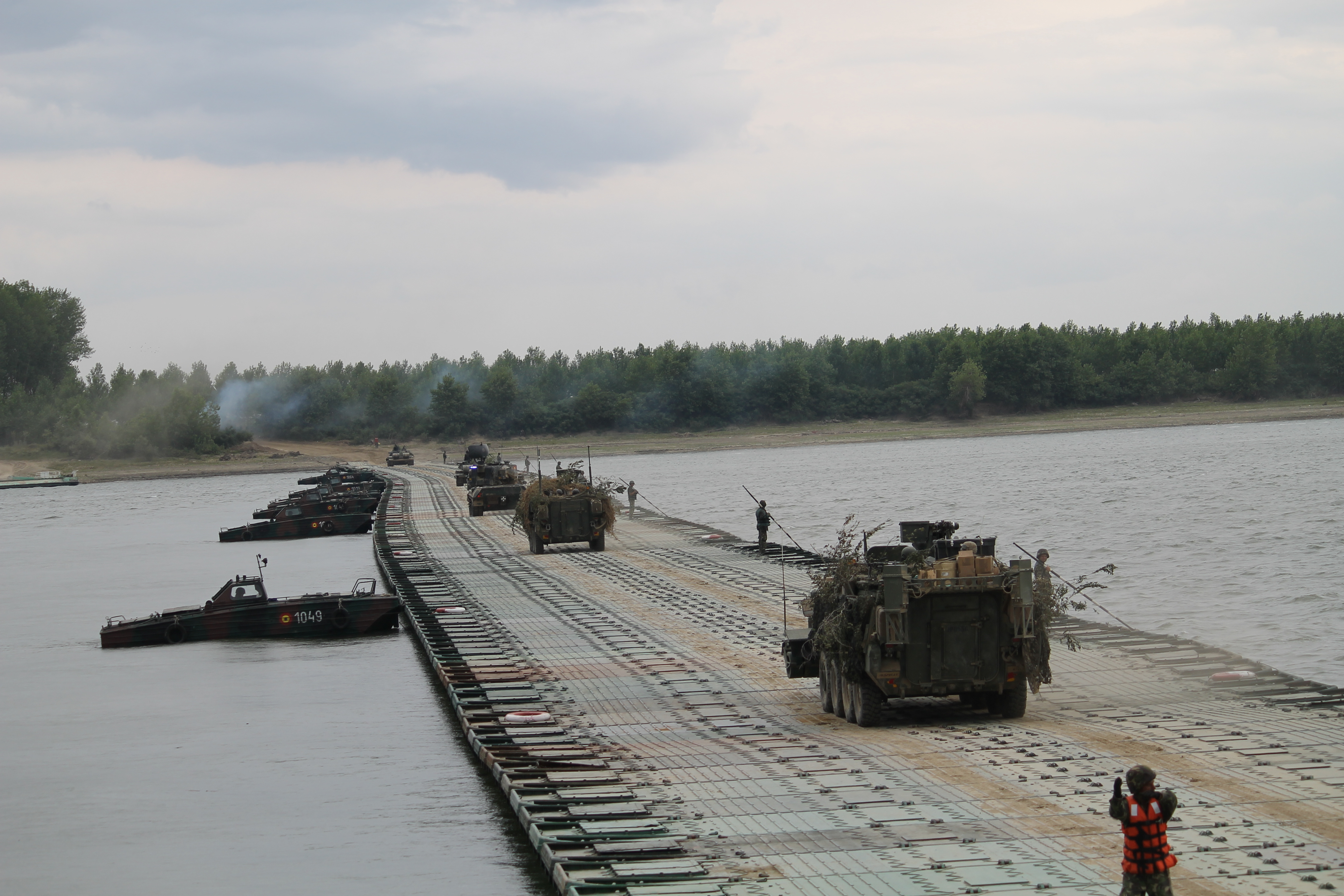 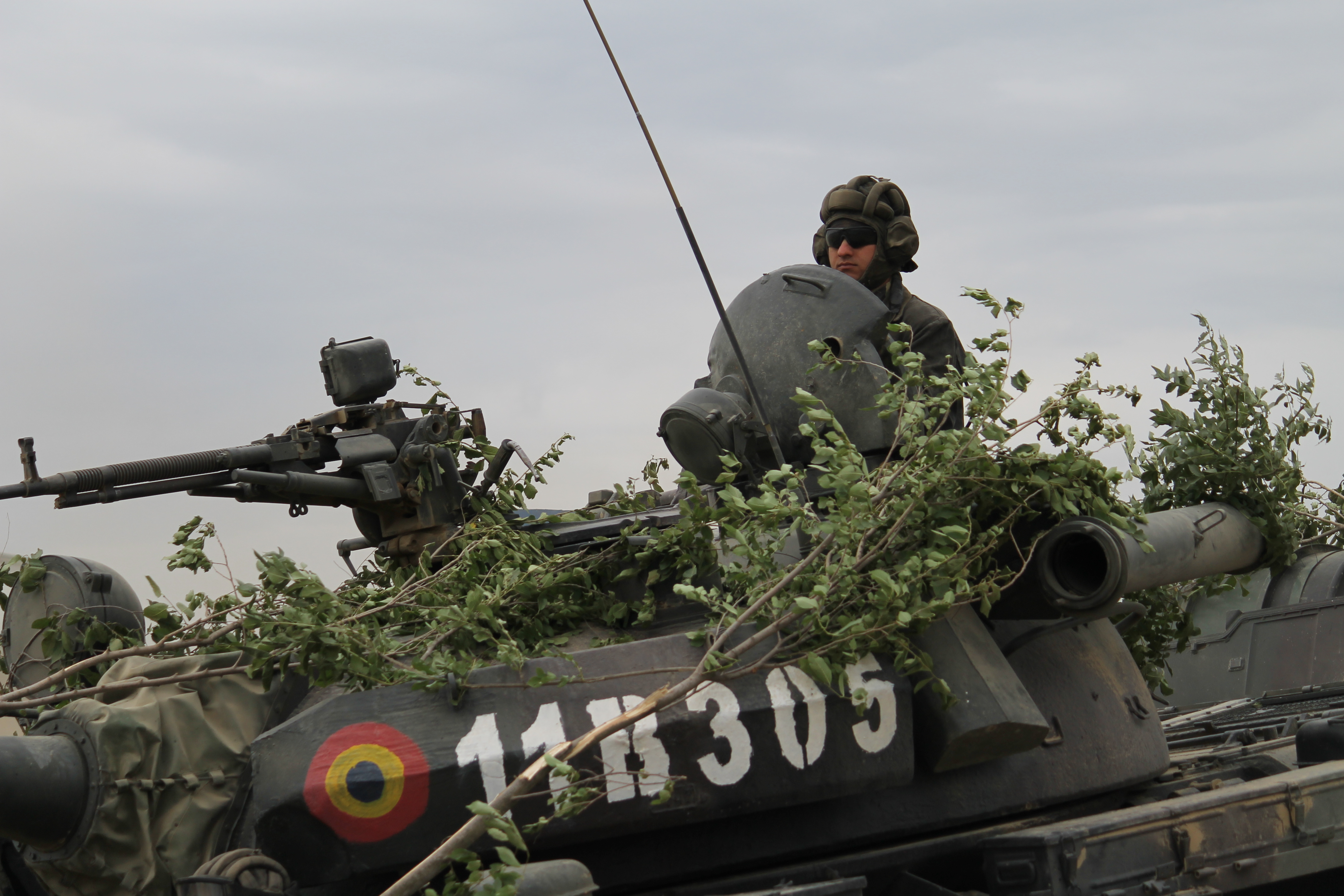 A Romanian soldier rides in a T-85 main battle tank across the bridge during the river crossing. (Jen Judson/Staff)
23 of 23 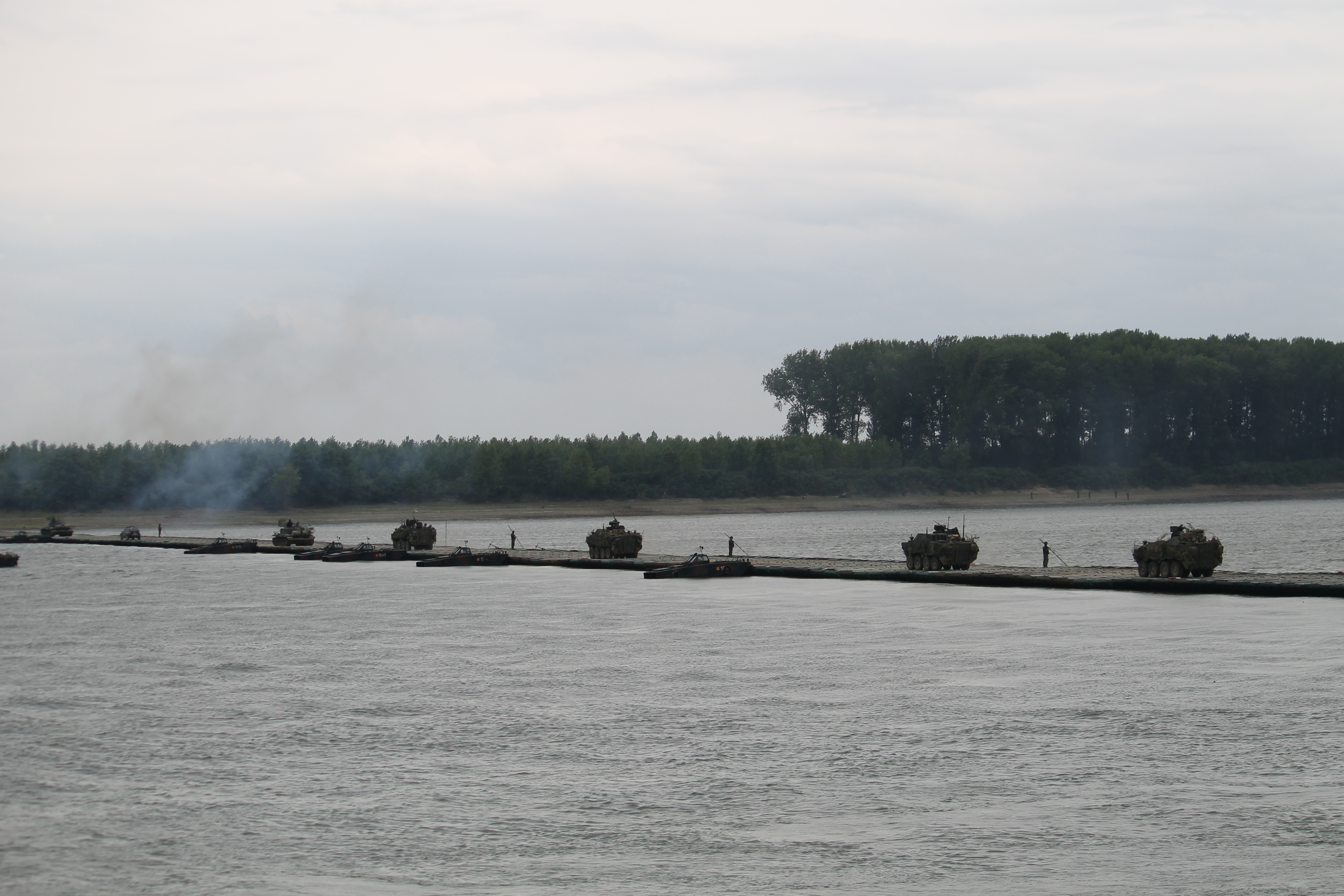 U.S. Strykers move across the Danube. The river is critically important to the region because it serves as a great highway of commerce for many different countries and feeds into the Black Sea. Romanians are concerned about what Russia has done in the Black Sea and Crimea, and they fear further Russian aggression and encroachment in strategically important waterways. (Jen Judson/Staff)
About Jen Judson