LCS Missile Shoot Is ‘Successful’ — But a Miss

By Christopher P. Cavas
160719-N-ZZ999-007 USS Coronado (LCS 4), an Independence-variant littoral combat ship, launches the first over-the-horizon missile engagement using a Harpoon Block 1C missile. Twenty-six nations, 40 ships and submarines, more than 200 aircraft and 25,000 personnel are participating in RIMPAC from June 30 to Aug. 4, in and around the Hawaiian Islands and Southern California. The world's largest international maritime exercise, RIMPAC provides a unique training opportunity that helps participants foster and sustain the cooperative relationships that are critical to ensuring the safety of sea lanes and security on the world's oceans. RIMPAC 2016 is the 25th exercise in the series that began in 1971. (U.S. Navy photo by Lt. Bryce Hadley/Released)

WASHINGTON — For the first time, a littoral combat ship (LCS) has successfully launched a Harpoon surface-to-surface missile — but the missile failed to hit its target.

The LCS Coronado launched a Harpoon Block IC missile from a canister installed on its forward deck late Tuesday afternoon during Rim of the Pacific (RIMPAC) exercises near Hawaii. The target, the decommissioned frigate Crommelin, was about 20 nautical miles away.

"The missile left the ship as planned in the engagement plan," Cmdr. Scott Larson, commanding officer of the Coronado, said Wednesday during a phone interview while still at sea. "We saw visually a booster separation, and it looked as though the missile was on the correct bearing. We lost radar track as the missile moved down range."

"The data is still being analyzed to determine what the missile profile looked like," Larson added. "Indications are it was a negative impact. But it was successful in validating our ability to deploy that missile off the ship and not damage the ship."

The Naval Surface Warfare Center Corona Division, an independent analysis and assessment center, is reconstructing the firing and making a more definitive assessment of what happened during the missile shoot, Larson added.

It was not the first time an anti-ship missile was fired from Coronado, which in September 2014 conducted a feasibility launch of a Kongsberg Naval Strike Missile (NSM). But that test was from a box launcher simply set on the edge of the flight deck, and the test was not part of a larger exercise.

The Navy is working to give its LCSs and subsequent frigate variants a bigger punch, and the installation of a surface-to-surface missile is a major feature of the upgrades. Both the NSM and the Boeing-built Harpoon will be installed on deployed LCSs, the first of which is the Coronado. The LCS Freedom will be fitted with the NSM by the time it deploys this winter to the Western Pacific.

The Harpoon installation on Coronado is still incomplete. The ship arrived at Pearl Harbor June 29 for the RIMPAC exercises with Harpoon missile cradles for four missile canisters installed forward, but no canisters to carry the weapons. She left Pearl July 12 with one canister installed and loaded with the missile used July 19.

The missile, Larson said, was "partially detanked" without a full fuel load "due to range safety directives" from the Pacific Missile Range Facility.

"We loaded one missile for the test, loaded on the port aft launcher, known as Cell No. 4," Larson said. "It was a structural test firing, we wanted to put it closer to the deck structure to provide a more meaningful analysis."

The missile is not yet integrated with Coronado’s combat system, Larson said, but data from the system was used by the Harpoon engagement planner to carry out the launch.

"Harpoon in the present installation is a stand-alone weapon system," he said, but future systems will be fully integrated.

It’s the second RIMPAC for Coronado, which also attended the world’s largest naval exercise in 2014. It’s been a busy time. 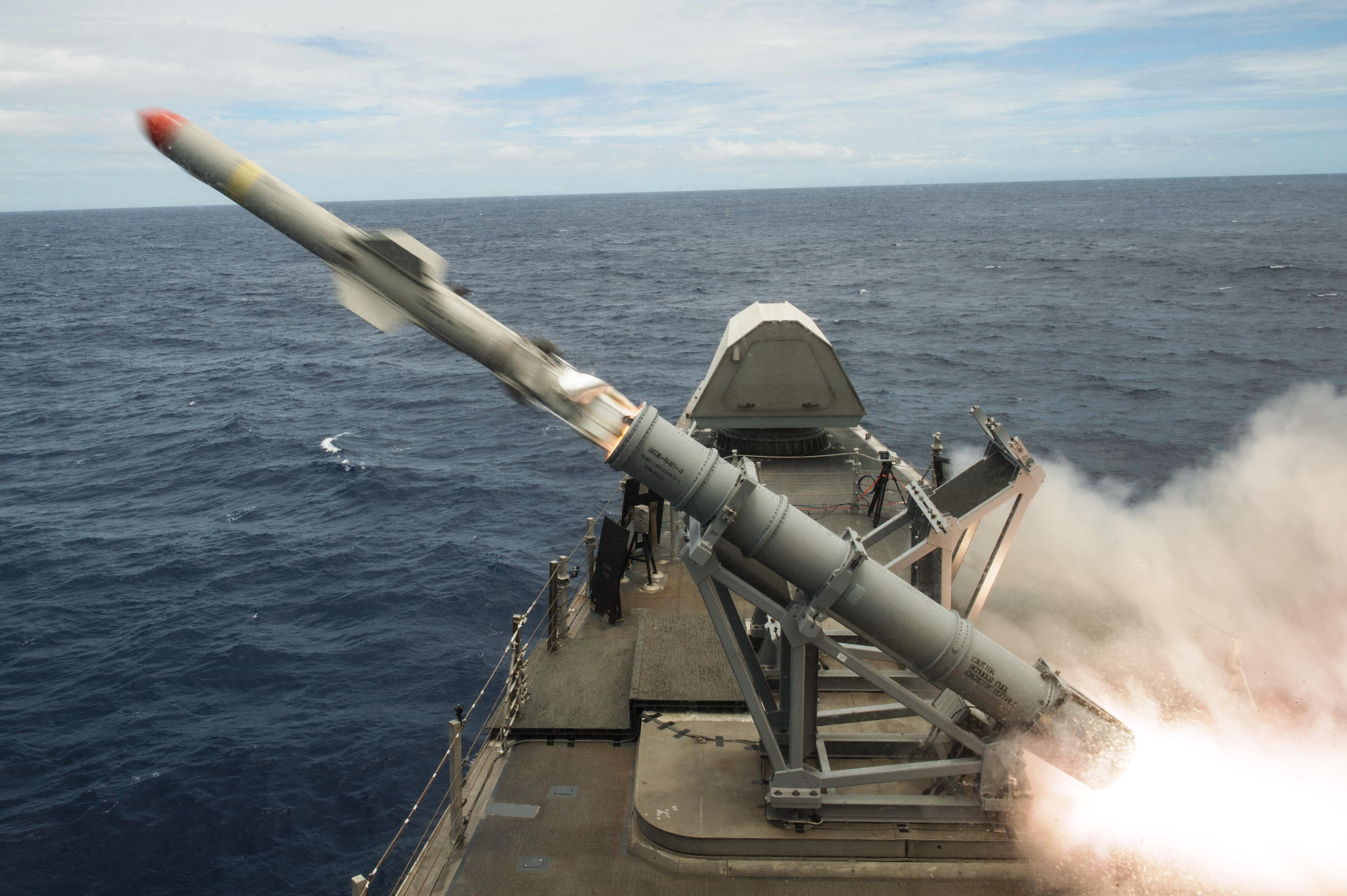 A view from the bridge as the Coronado launches the Harpoon. Behind the missile is the rear of the ship's 57mm gun mount.
Photo Credit: MC2 Michaela Garrison, US Navy
"The ship has had a pretty robust level of participation and integration in the exercise and with the partner navies," Larson said. "We’ve done some multinational interdiction and counter-piracy operations. We worked with the Chinese Navy, doing cooperative boarding with them to get a better sense of maritime security operations."

The drone helo hasn’t yet been flown in the exercises, Larson said, "but we’ll be flying quite a bit in the next several days."

"We’re still in many ways developing the art of the possible for the MQ-8B," he added.

Larson noted that the aircraft, unlike most Fire Scouts deployed in years past, is fitted with a radar package.

"It has an inverse synthetic aperture radar, a core radar and a FLIR [forward-looking infrared] pod able to transmit real time video back to the ship," Larson said. "It can be a tremendous asset."

Coronado will return to Pearl Harbor after RIMPAC for a three-week continuous maintenance availability before heading west to begin a deployment operating from Singapore. When the ship leaves Pearl, Larson said, all four missile canisters will be installed and loaded with Harpoons.

The addition of the missile, he emphasized, is a huge boost for LCS.

"It’s very significant," he said. "It’s a huge win for the program, a game-changing capability for the LCS variant, for the Navy and the message we’re trying to send in Seventh Fleet."

And while the LCS-launched Harpoon went awry, the target ship Crommelin did not survive multiple strikes by other ships, sinking during the evening of July 19.

Defense Secretary Lloyd Austin has again ordered the Pentagon to postpone a planned test launch of an intercontinental ballistic missile, this time amid increased tension with China over Taiwan.

Pentagon’s secret communications network to get upgrade from Booz Allen

“DISA has made clear that we will not forget that the ‘fight’ is fought on SIPRNet,” said Christopher Barnhurst, the agency’s deputy director.

Using Credit Cards – What are some ways to avoid financial trouble with credit cards? — Money Minute