It doesn't take a missile to shoot down a drone, so the Army is rethinking battle across domains

By Meghann Myers
ZEESTOW, GERMANY - MAY 15: A commercial passenger plane flies overhead as a multirotor quadcopter drone used for aerial photography flies on June 7, 2011 near Zeestow, Germany. Many governments in Europe and North America have recently introduced legislation to allow the commercial use of drones for a variety of purposes. (Photo by Sean Gallup/Getty Images)

HUNTSVILLE, Ala. — After nearly two decades fighting in developing nations like Iraq and Afghanistan, the U.S. Army is pivoting toward the future, focusing on winning fights against enemies with comparable technology.

To do that, the Army and Marine Corps got together to envision what that battle might look like and came up with "Multi-Domain Battle: Combined Arms for the 21st Century," a white paper that dropped Feb. 24.

"Interdependence is our primary vulnerability," said Gen. David Perkins, commander of Army Training and Doctrine Command, at the Association of the United States Army's winter meeting in Huntsville, Alabama, on Monday.

The U.S. military operates in the land, sea, air, space, cyber and electromagnetic domains, he said, but with a piecemeal approach that an enemy could jam if it figures out how to isolate one or several of them.

To push back, American forces need to break down the barriers between those domains so each segment is working toward the same solution and so problems can be solved across domains, Perkins said.

A potential adversary has three main focuses, he said. First is to fracture the air-land combination that worked so well in battlefields like those of Operation Desert Storm.

"They saw what we did. They said: 'You know what, this coalition is really good when they bring it together,' so we want to sort of fracture that synchronization," Perkins said. 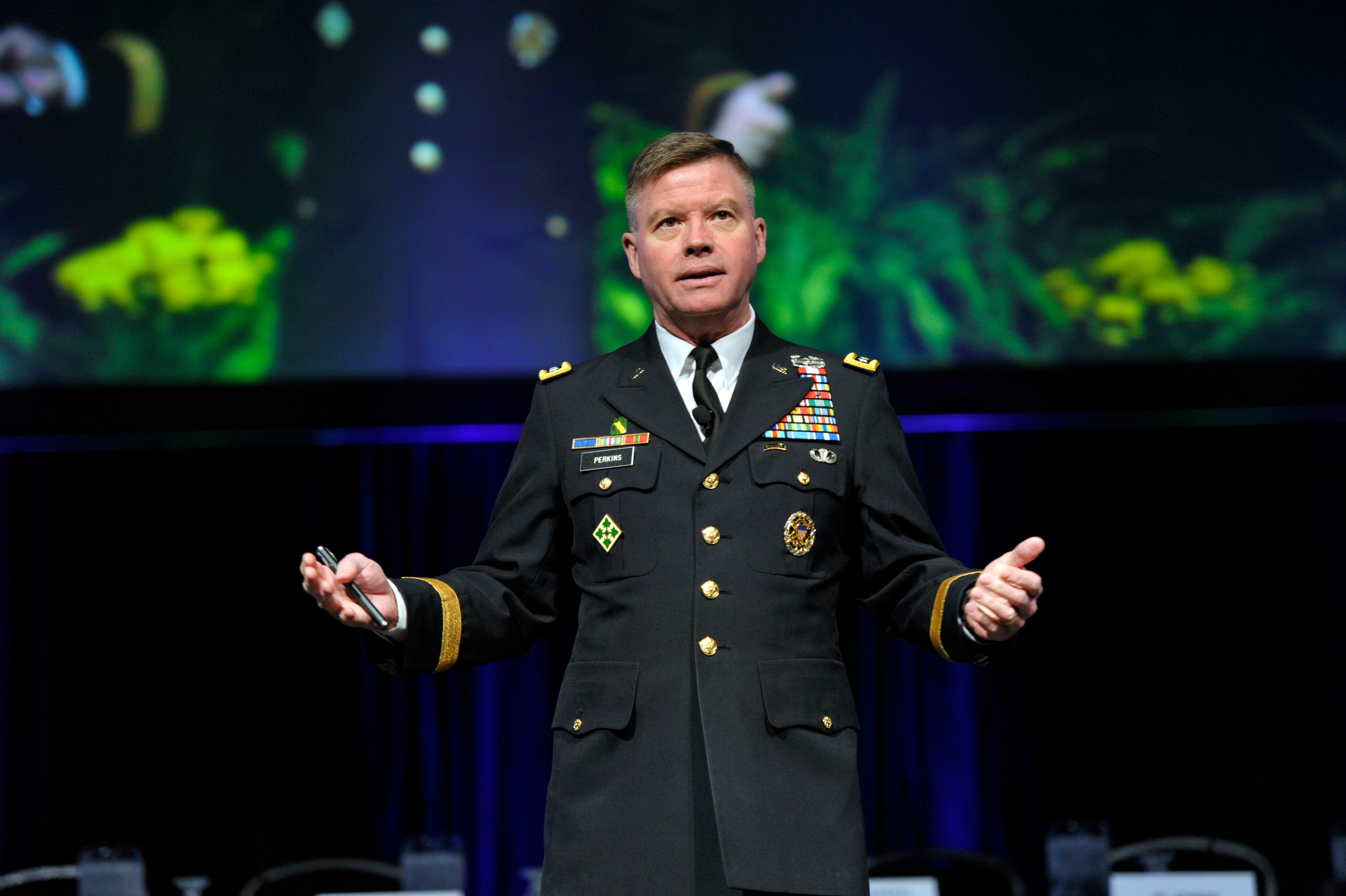 Gen. David Perkins, head of U.S. Army Training and Doctrine Command, discusses multi-domain battle at the Association of the United States Army winter meeting March. 13 in Huntsville, Ala.
Photo Credit: Luc Dunn/AUSA
They also want to put up a strong anti-access/area denial fight to keep U.S. forces out of their area of operations.

"Don’t let them get a footprint into the area of operations, because once they get a foot in there, they’ll build of the proverbial mountain of iron," Perkins said. "Even if they want to leave themselves, they won’t be able to get out."

The last is to keep the ground forces at bay, which is where the Army and Marine Corps figure in the most.

"Don’t let them maneuver on you," Perkins said. "If I can fix the U.S. military and its coalition partners, and I can keep them, sort of, without being able to bring their domains together — and if I can even keep them at arms length — I have a change of defeating them and deterring them."

Multi-domain battle should make that a lot more difficult.

"One of the ways this is different than even when we started looking at air-land battle is [when] we would have a problem, we would then break it down into war-fighting functions and domains and then start solving those problems in those proverbial cylinders of excellence," Perkins said.

Then they would join back up to synchronize them, but because they had been developed in a silo it would require workarounds to reintegrate the domains.

Now that the white paper is out, he added, the Army is socializing the idea and looking for feedback on how to redesign the battlefield framework to support it.

The Army also needs to reorder how it looks at capabilities like air defense. Perkins offered the example of a U.S. ally that was having issues with an enemy drone in its airspace.

That dynamic is much more sustainable for an adversary.

"If I’m the enemy, I’m thinking I’m just going to get on Amazon and buy all the $100 quadcopters I can and expend all the Patriot missiles out there," he said.

Instead, there could be an electromagnetic or cyber solution to jam a drone and drop it from the sky without firing a shot.

The next step, he said, is perhaps figuring out an Army fires unit that could respond across domains — with electromagnetic fire power or out to sea depending on the situation.