Developed and demonstrated by General Robotics with support from Israel’s Ministry of Defense (MoD), Project Hyena — named after an animal notorious for deception and thievery — infuses foldable, semi-autonomous lightweight platforms with the sounds and signatures of actual tanks and other armored vehicles in order to provoke and deceive the enemy.

The project was recently declassified and will soon be available to select export customers, said company founder Udi Gal, a retired colonel and former scientific deputy for defense research and development.

"We’re evaluating now with MoD which countries we will be permitted to cooperate," Gal said.

In his first interview on the program that dates back to 2012, Gal said the decoys were put through numerous field tests, alongside genuine armor, to compare visual and thermal signatures. In the past year, General Robotics extended the program to test signatures in millimeter-wave.

"In the past, advanced decoys were very expensive, since they essentially had to recreate a target," Gal said.

"But now, with new technology, advanced robotics and some other tricks that we’ve added, we can create targets that are almost impossible to distinguish from the real thing. And we can do this for a few tens of thousands of dollars; just a fraction of one percent of the cost of a main battle tank."

Gal insists such decoys will be deployed in the future alongside armor and engineering platforms to open maneuvering routes and clear obstacles. Eventually, once operational concepts are updated and fully embraced by commanders and field soldiers, he said they will be used for more complex maneuvering missions to attract and deflect fire away from armored as well as infantry forces. 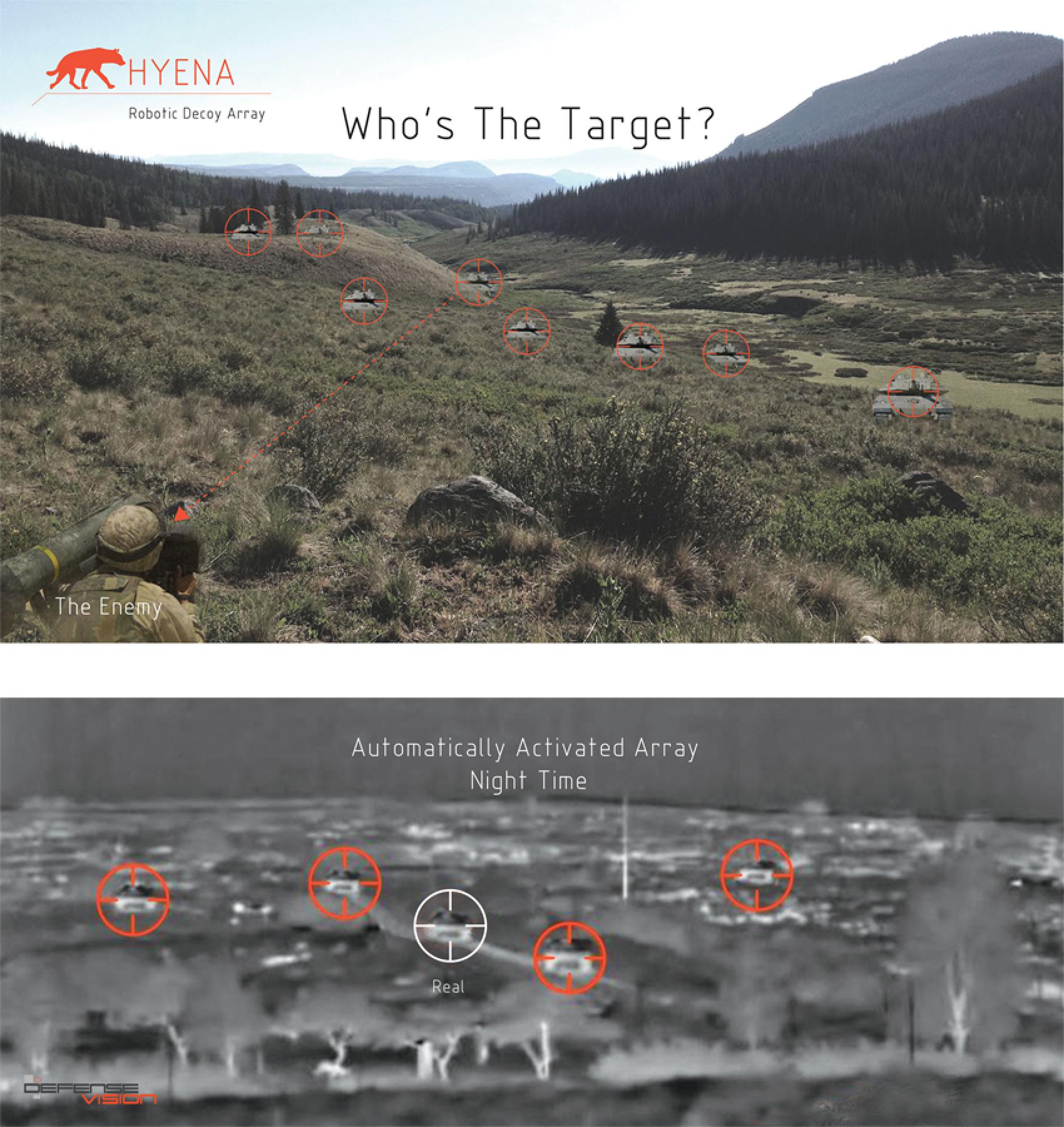 Project Hyena infuses foldable, semi-autonomous lightweight platforms with the sounds and signatures of actual tanks and other armored vehicles in order to provoke and deceive the enemy.
Photo Credit: General Robotics
And while he recognizes the reluctance of commanders to devote attention to these new tools in the heat of battle, Gal says such smart decoys can be deployed in a way that "80 percent to 90 percent" of maneuvers can be done autonomously.

"Most of the decisions will be done automatically, but they will still need to be commanded to remain at a precise distance from the real platforms. Operational concepts will have to be adapted to take advantage of these tools … but I’m convinced these smart robotic decoys will eventually be in high demand for the enhanced survivability they provide to maneuvering forces," he said.

Retired Brig. Gen. Halutzi Rodoi, a former division commander and chief armored officer of the Israel Defense Forces (IDF), said such smart decoys can prove beneficial against what is known here as "disappearing enemies" — those who conceal themselves in urban theaters, amid forestry or even in underground tunnels.

"Our biggest problem today is detecting the low-signature enemy who pops up suddenly and then disappears again. These snipers or anti-tank missile squads don’t want to engage us. They prefer to lie in wait. … These decoys can help flush him out," Rodoi said.

According to Rodoi, who commanded the Armored Corps when Hezbollah repeatedly targeted IDF Merkava Mk4 tanks during the 2006 Lebanon War, active protection is essential against such enemies, but not enough.

"Active protection has contributed in an amazing way to force protection, but it still doesn’t solve the problem of knowing where the enemy is until he’s fired. In order to be efficient and return the advantage to the stronger force, we need to compel these weaker enemies to act … and this is where the smart decoys come into play."

Rodoi said the IDF and Israel’s defense establishment have been evaluating multiple technologies, tactics and procedures for remaining relevant and restoring operational advantage against such disappearing enemies.

"The invisible enemy with anti-tank missiles is all over today, in high-intensity and low-intensity conflict. I’m convinced there’s a need for such smart decoys to be connected with other sensors and shooting platforms and deployed throughout our maneuvering forces," he said.

Avigdor Klein, a retired IDF brigadier general who also served as chief armored officer, was skeptical about the prospect of widespread deployment of such decoys as an integral element of the maneuvering ground force. "To saturate the battlefield with thousands of these devices would require a new organization and doctrine."

Nevertheless, Klein was enthusiastic about near-term prospects for using such decoys in limited operations or what the IDF calls "the war between wars."

"It will be great to have a company or two of these kinds of platforms to use for specific operations where we need to seduce terror organizations to act against us. But for wide-scale wars, I don’t see robotics becoming an integral part of our maneuvering force, at least not for the foreseeable future."