LCS Jackson Completes Repairs, Is Back at Sea

WASHINGTON – The littoral combat ship Jackson has completed post-shock trial repairs and returned to sea, the US Navy confirmed Wednesday. The repairs, carried out in a dry dock, were necessary after the ship underwent three full-scale shock trials (FSSTs) this summer off northeastern Florida. The tests were designed to reveal how the ship would perform in a realistic threat environment.

The FSSTs concluded July 16 when a 10,000-pound explosive charge was set off with the ship nearby – Navy officials would not confirm the distance but judging from photos the ship was about 100 yards from the blast. The ship’s crew, along with Pentagon and Navy test officials and contractor representatives, was aboard during the tests.

The Jackson came through the tests better than expected, according to several sources, and the Navy noted damage was not severe as some models had forecast. The Navy had planned a two-month repair period to address the damages, but in the event the work was completed in less than six weeks.

"All critical work for continuing the ship’s employment schedule is complete and the ship is underway," Capt. Thurraya Kent, a spokesperson for the Navy’s acquisition office, said Wednesday.

"As anticipated, some equipment repairs were required as a result of the shock trials," Kent said, noting some damage was sustained by fuel tanks inside the Jackson.

"Small, minor leaks, or weeps, developed inside the ship, indicating the tank issue, but did not pose a personnel, equipment or environmental hazard," she said, adding that, "Inspection and repair to fuel tanks required the use of a barge to defuel the tanks," and no fuel was spilled. 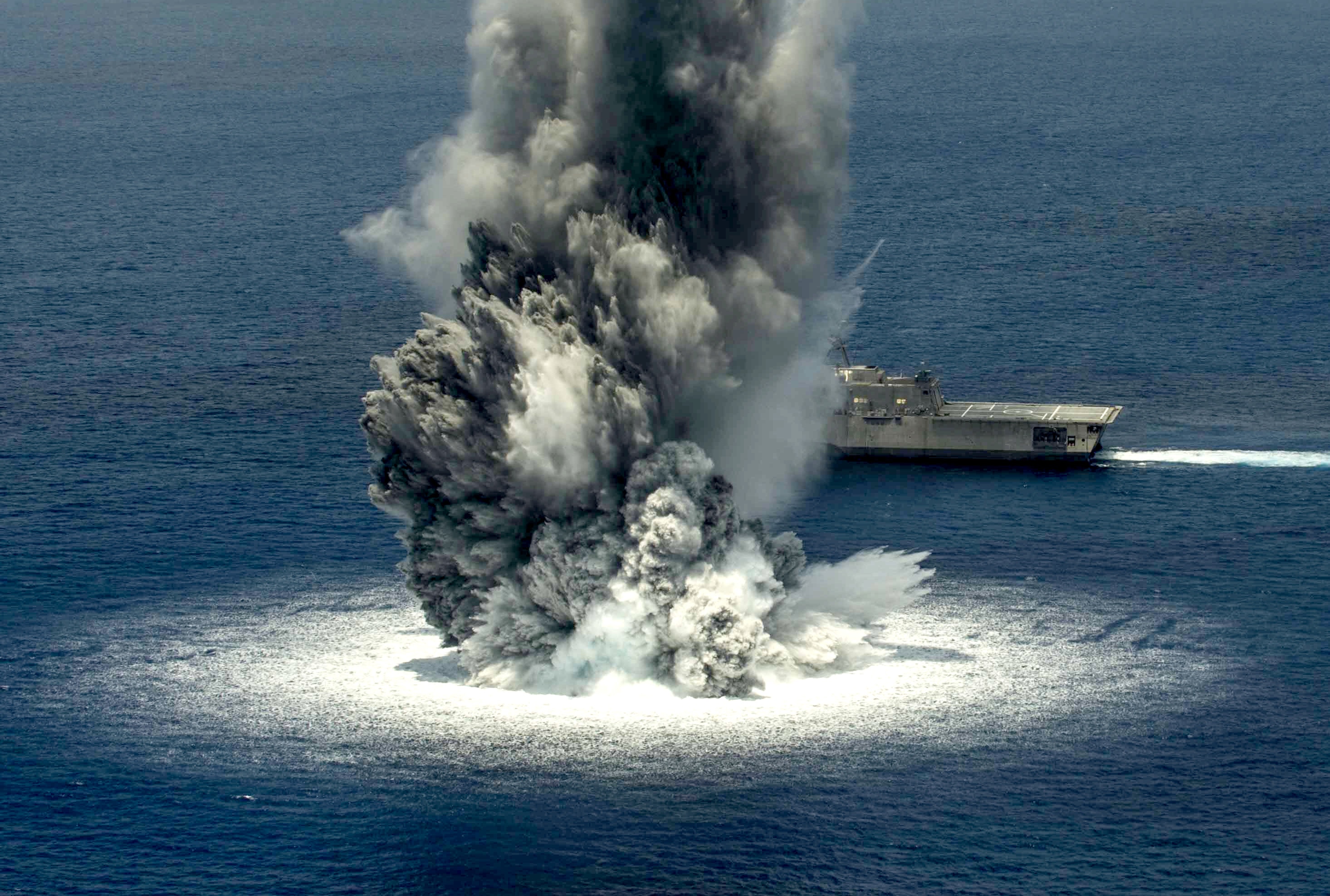 An explosive charge goes off near the Jackson on June 13, in the first of three shock tests.
Photo Credit: U.S. Navy
The work was led by Austal USA, the ship’s builder, working under an $11.2 million contract awarded in late June specifically to address anticipated post-shock trial repair issues. The ship was dry docked at BAE Systems in Jacksonville, Florida, Kent said, and was completed "within the overall funding of the awarded contract.

Work continues to assess the results of the shock trials, Kent said, with data being retrieved from about 260 sensors placed throughout the ship.

The Jackson is an all-aluminum, trimaran ship of the Independence class. A second series of shock trials is set to begin with the Milwaukee, of the steel-hulled Freedom class, which has been fitted with a similar sensor suite. The initial test window for the Milwaukee tests, to be held in the same area as Jackson’s, was scheduled for Aug. 31 to Sept. 2, but storms in the area are causing delays. As of Wednesday, authorities were looking at a possible Labor Day weekend start for the tests.

With her work on the east coast completed, Jackson is expected to head for her homeport of San Diego. Jackson will undergo another shipyard period in California to carry out a planned post-shakedown availability, scheduled to complete in 2017, before working up to deploy.

Meanwhile, the Coronado, a sister ship of the Jackson, is still at sea headed for Pearl Harbor, Lt. Rebecca Haggard, a spokesperson for Naval Surface Forces Command, said Wednesday. The LCS had been headed for a deployment in Singapore Monday when an as-yet undisclosed propulsion system incident occurred as Coronado was about 800 nautical miles from Hawaii. The ship turned around to return to Pearl Harbor but is limited only to 10 knots.

Military Sealift Command’s oiler Henry J. Kaiser is with the Coronado, and the destroyer O’Kane is readying to meet the LCS en route to Pearl.

The Coronado’s arrival in Pearl Harbor might be complicated by hurricanes in the Hawaiian region.

The Coronado incident follows earlier problems in recent months with the Milwaukee, Freedom and Fort Worth, all Freedom-class ships.

China surpasses US in number of ICBM launchers

The STRATCOM notification prompted Republicans to push for expanding the U.S. nuclear arsenal beyond the current modernization efforts.