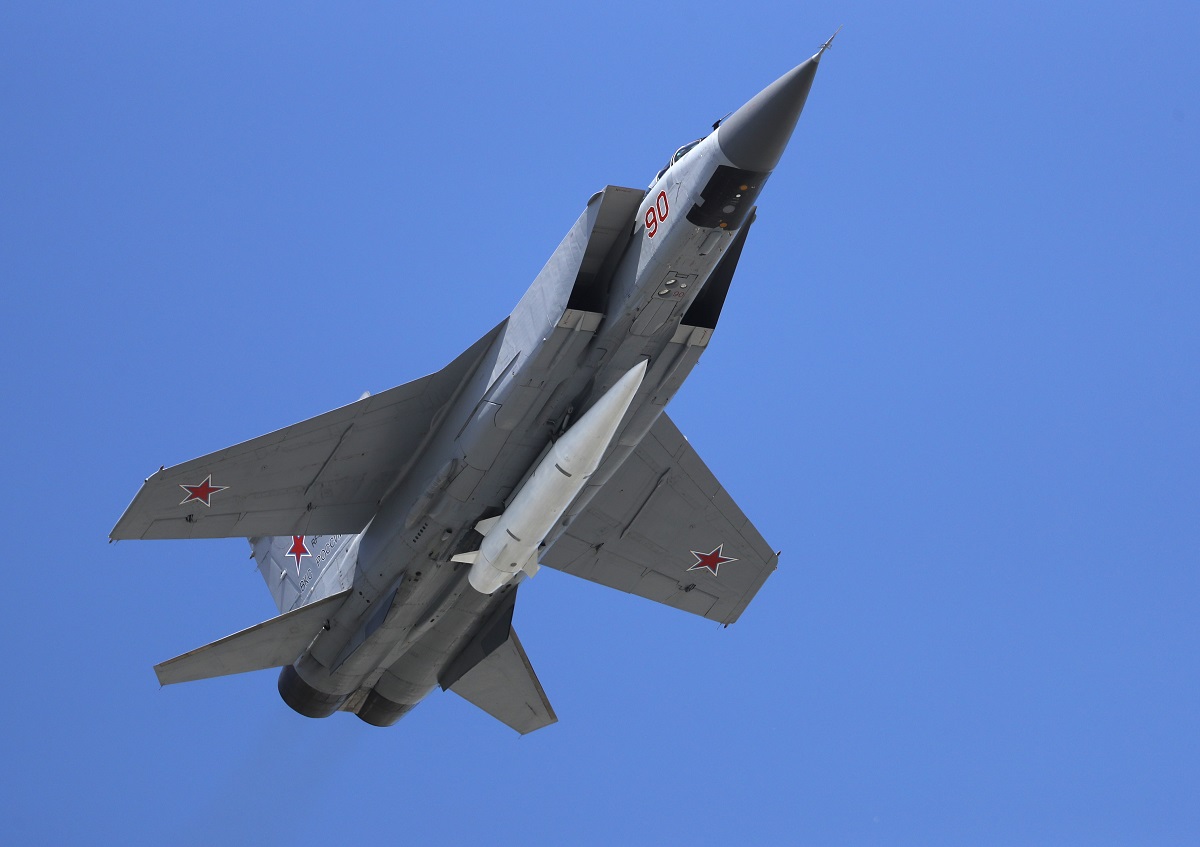 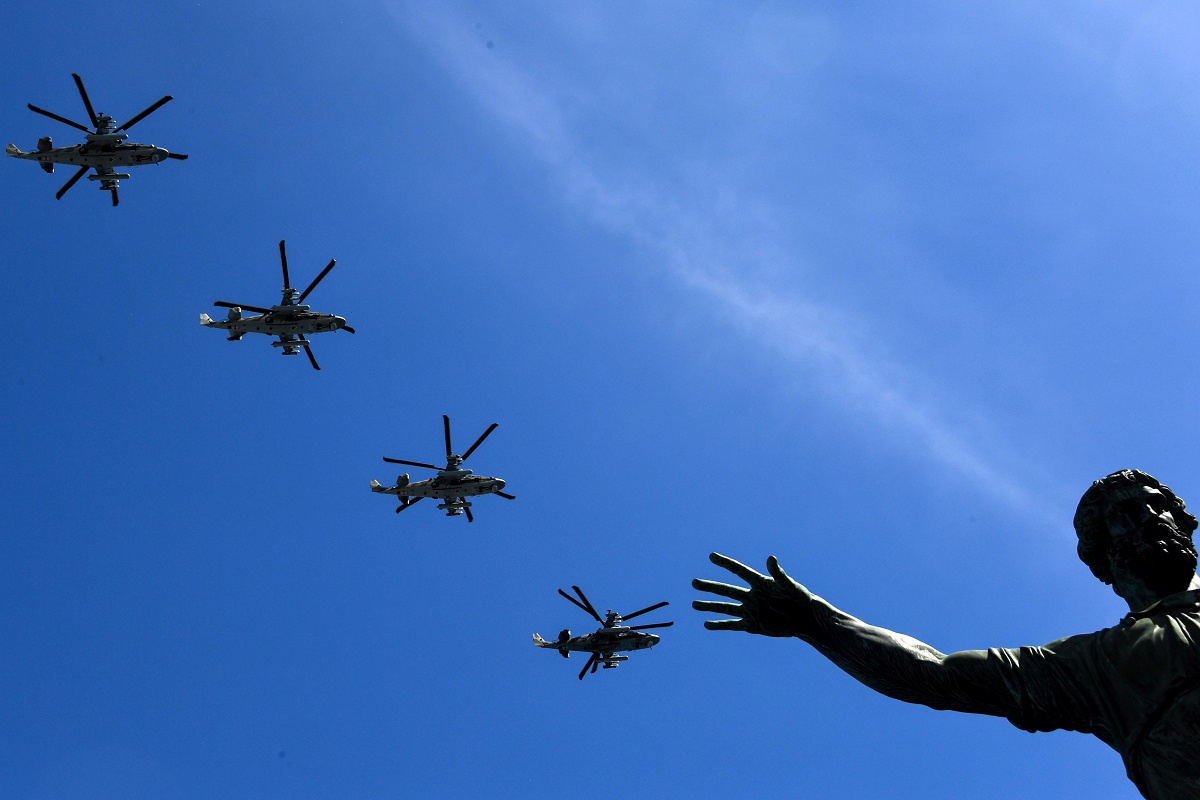 Russian Ka-52 helicopters fly over Red Square during the Victory Day military parade in Moscow on May 9, 2018. (Kirill Kudryavtsev/AFP via Getty Images)
3 of 8 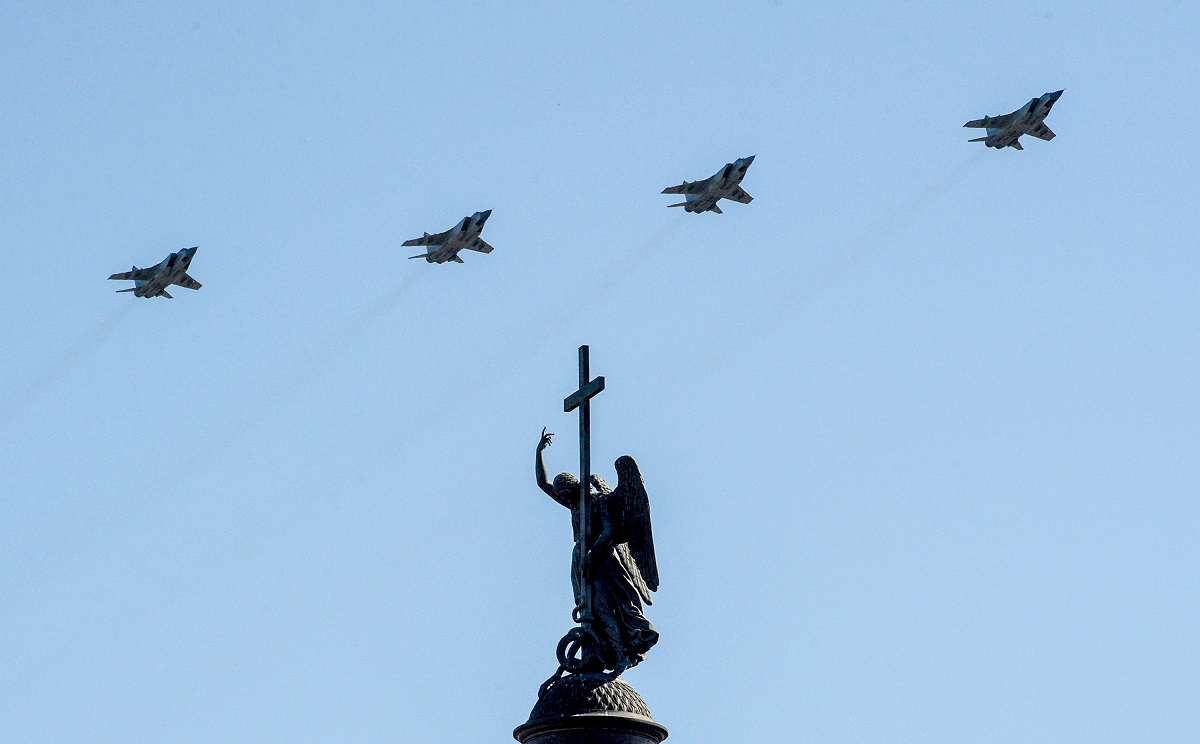 Russian military planes fly over Dvortsovaya Square during the Victory Day parade in Saint Petersburg on May 9, 2018. (Olga Maltseva/AFP via Getty Images)
4 of 8 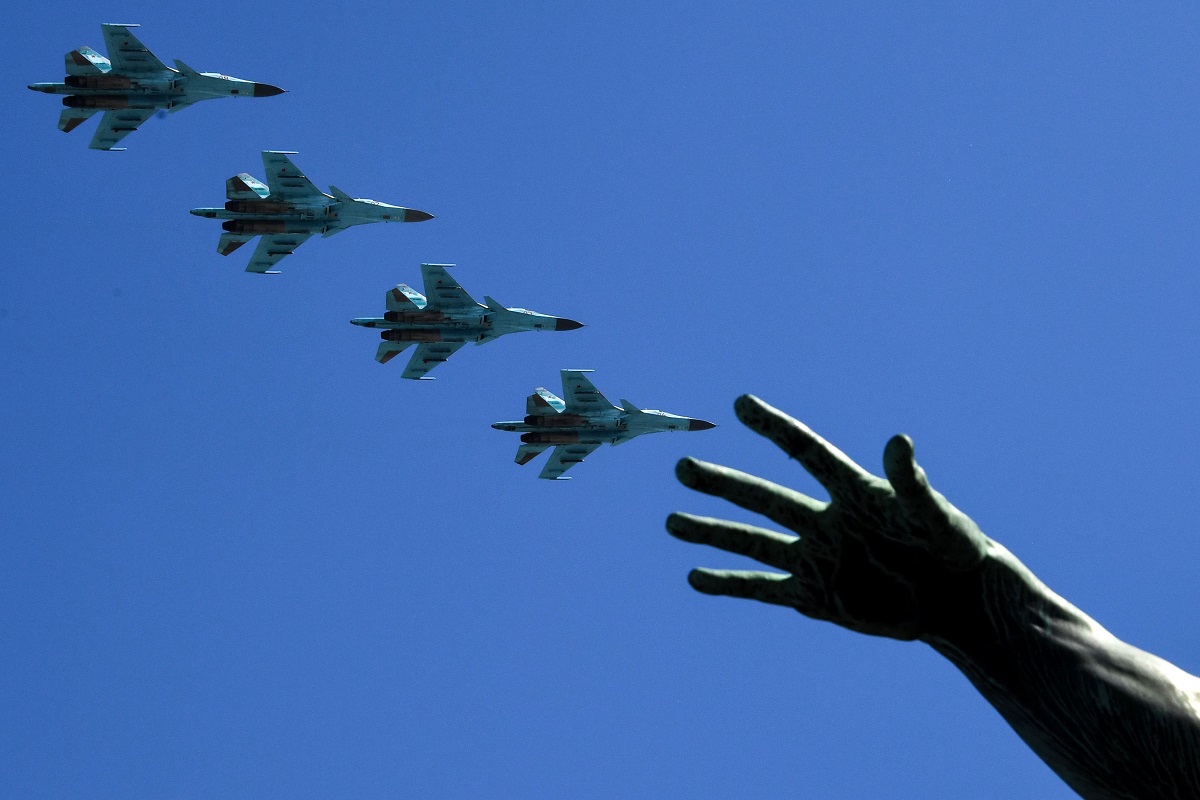 Russian Sukhoi Su-34 bombers take to the skise as the country marks the 73rd anniversary of the Soviet Union's victory over Nazi Germany in World War Two. (Kirill Kudryavtsev/AFP via Getty Images)
5 of 8 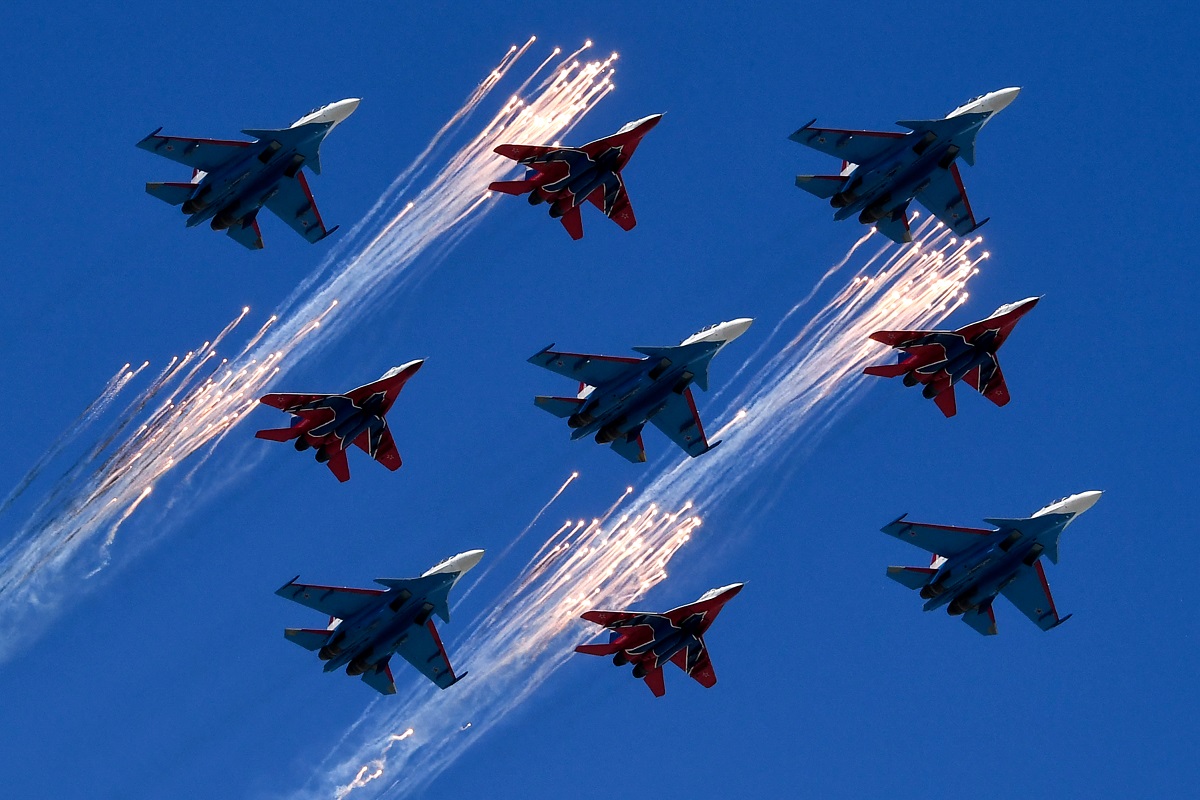 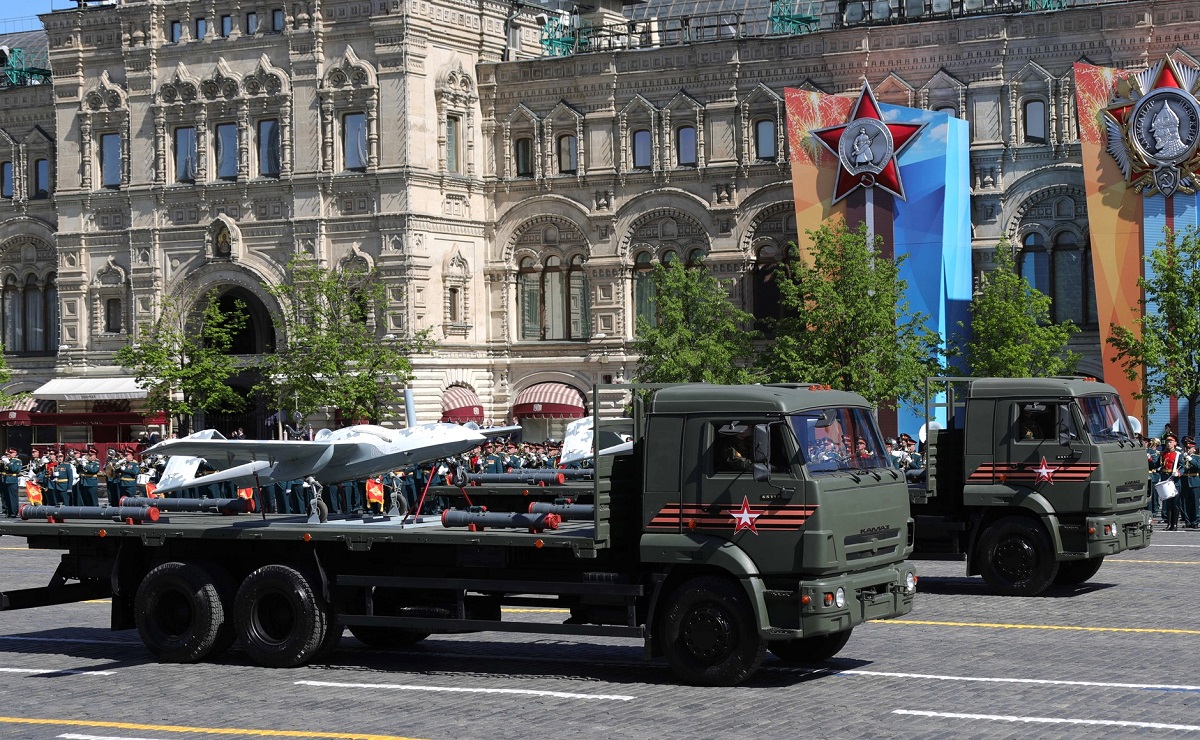 Russia's Korsar UAV made an appearance at the parade. (Russian Presidential Press and Information Office)
7 of 8 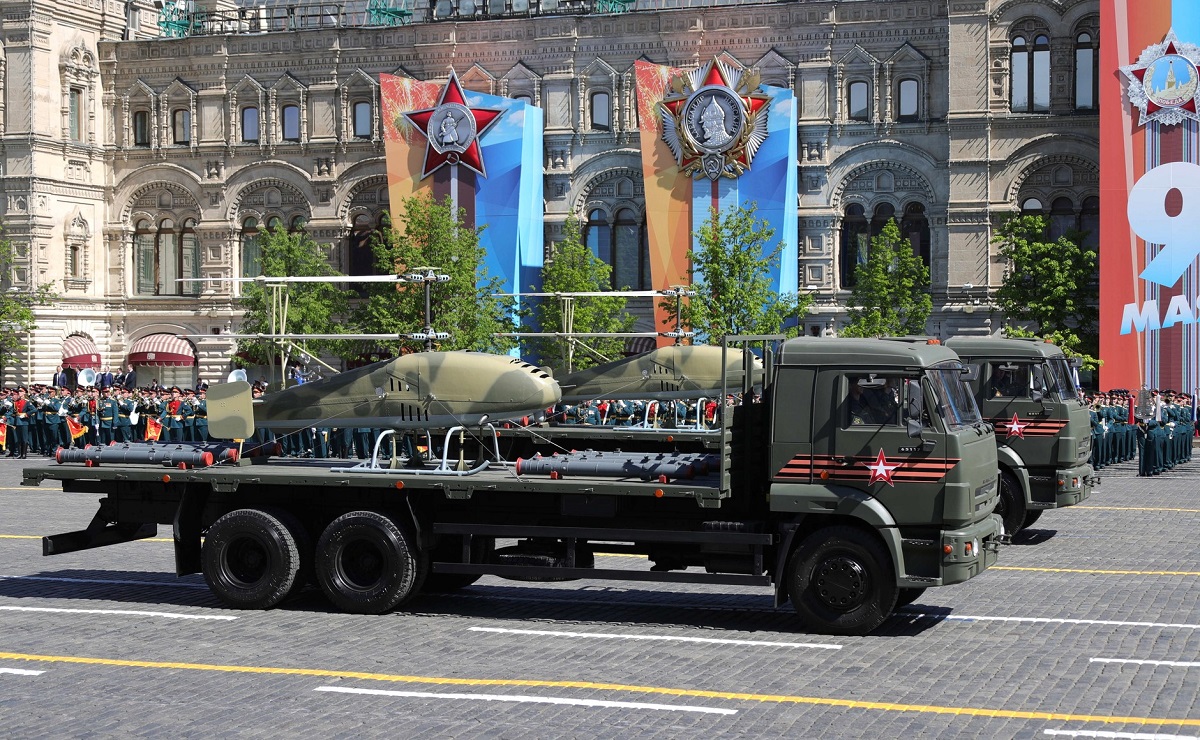 For many Russians, the annual Victory Day parade in Moscow is an opportunity to reflect on their wartime history and mourn losses that touched nearly every family in the former Soviet Union and neighboring states. (Russian Presidential Press and Information Office)
8 of 8 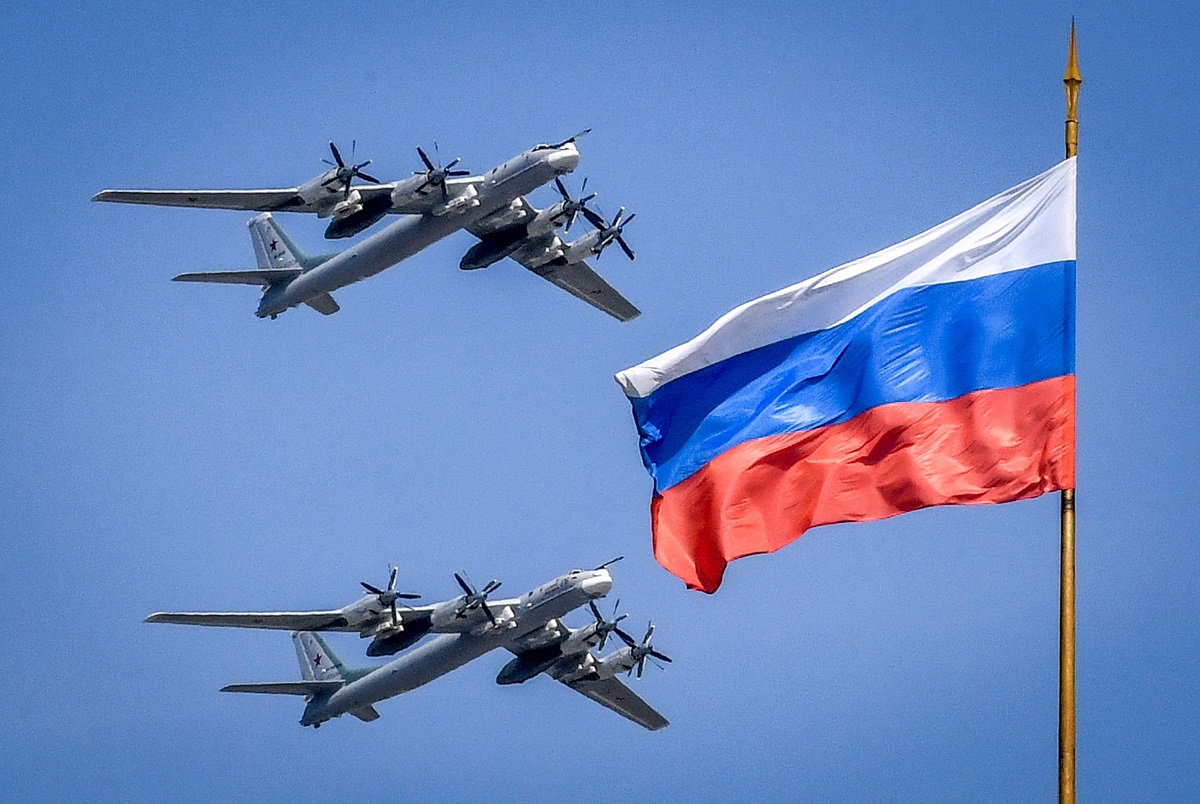 Russian Tupolev Tu-95 turboprop-powered strategic bombers fly above the Kremlin during a rehearsal for the Victory Day military parade on May 4, 2018. (Yuri Kadobnov/AFP via Getty Images)

MOSCOW ― For many Russians, the annual Victory Day parade in Moscow is an opportunity to reflect on their wartime history and mourn losses that touched nearly every family in the former Soviet Union and neighboring states. But the parade now has for several years served another purpose: the exhibition of Russia’s latest and greatest weapons systems and platforms.

In that regard, the parade has struggled in recent years to live up to 2015’s 70th anniversary parade, where a wide variety of new hardware was unveiled for the first time. But this year’s parade saw some noteworthy additions to Russia’s future arsenal. But the greatest item of interest was perhaps the hardest to see.

During the parade’s finale — a flyby of nearly every type of aircraft flown by the Russian Air Force — two unaccompanied MiG-31 fighter jets made their pass over central Moscow.

Although the MiG-31 is a distinct and interesting aircraft, the items of interest were mounted below their bodies: hypersonic missiles.

It was the first public debut of the Kinzhal air-launched hypersonic missile, one of President Vladimir Putin’s doomsday super weapons unveiled at a controversial speech about nuclear modernization in March.

The weapon is a modified Iskander-M ballistic missile designed to be launched by a MiG-31 traveling at supersonic speeds.

Several pieces of new hardware that have been seen at military trade shows also made their Victory Day parade debut — namely the new Sukhoi Su-57 stealth fighter jet, which bares a strong resemblance to the American F-22. Two of the jets, decorated in a kind of gray-on-white camouflage pattern, came midway through the aerial part of the parade. 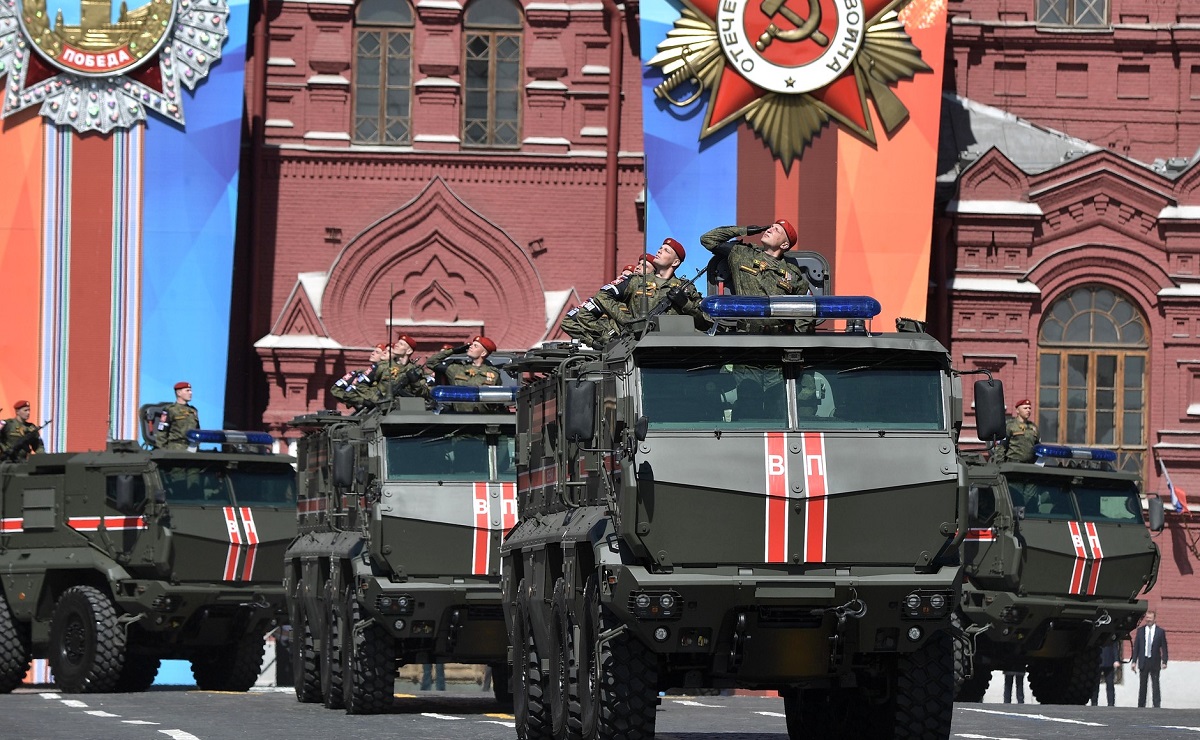 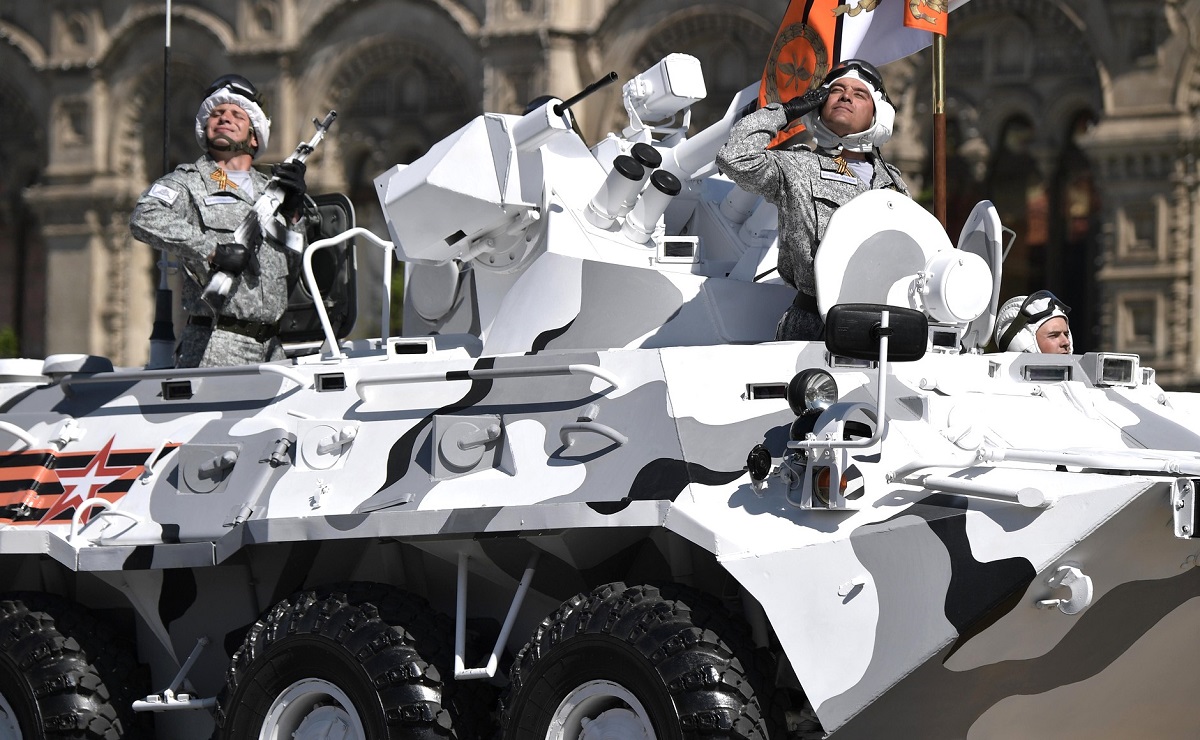 BTR-82 vehicles painted in Arctic colors are on display at Russia's annual parade. (Russian Presidential Press and Information Office)
3 of 13 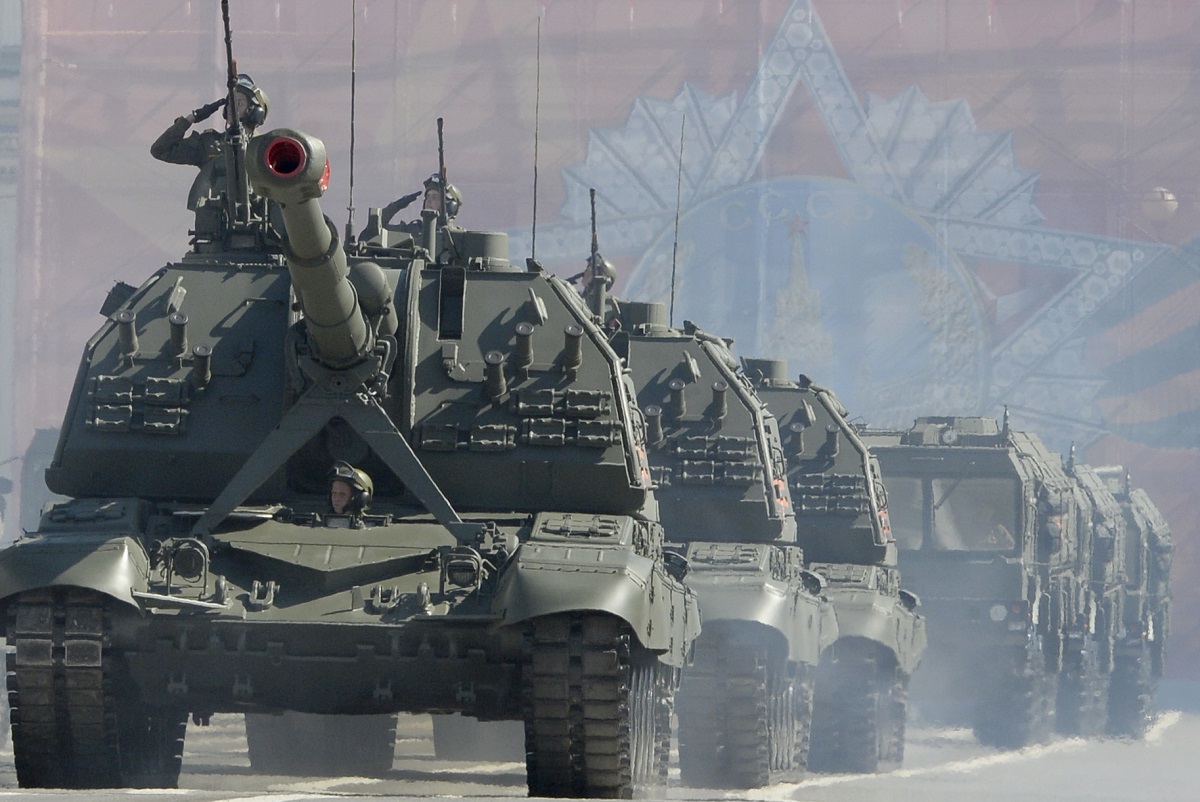 Russian Msta-S artillery vehicles parade through Dvortsovaya Square during the Victory Day military parade on May 9, 2018. (Olga Maltseva/AFP via Getty Images)
4 of 13 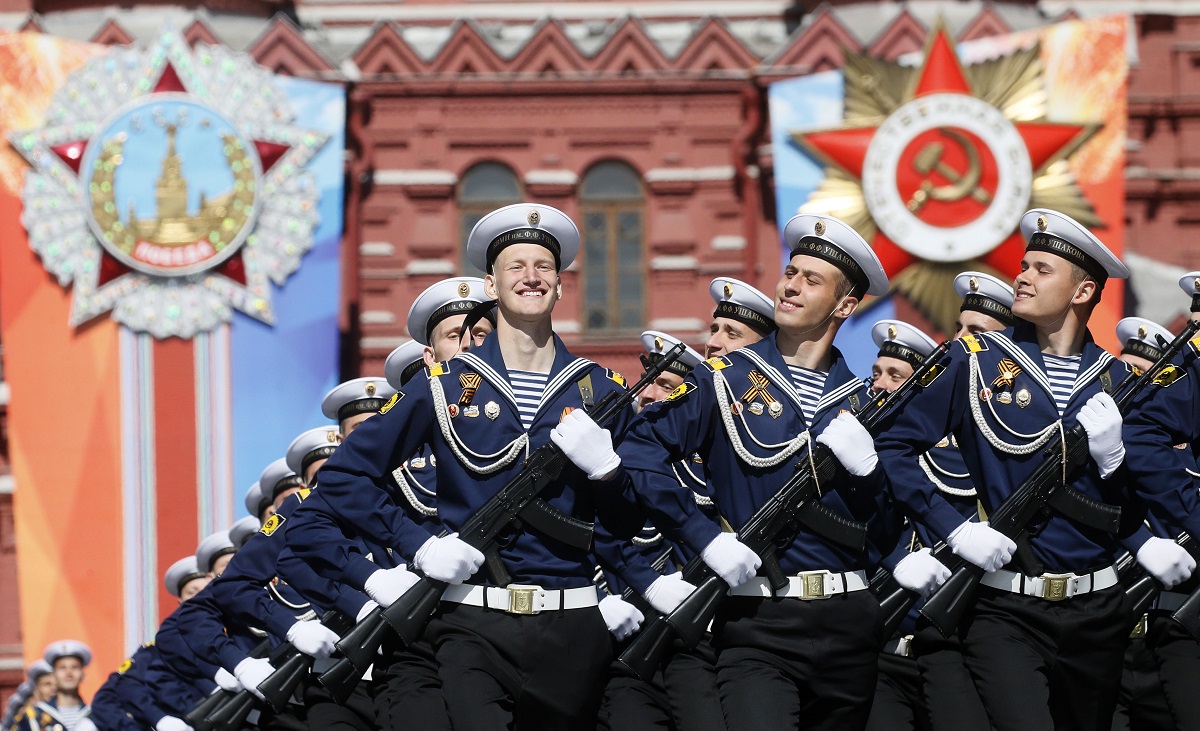 Russian sailors march at Red Square during the Victory Day military parade in Moscow on May 9, 2018. (Maxim Shipenkov/AFP via Getty Images)
5 of 13 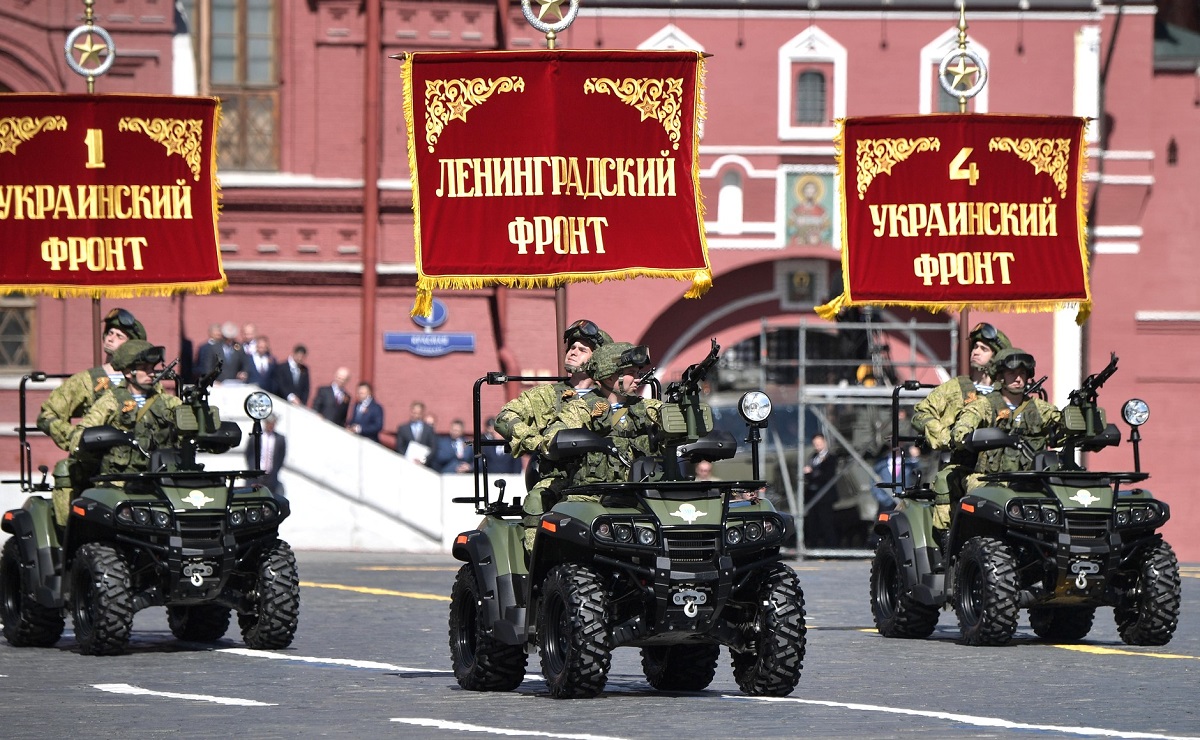 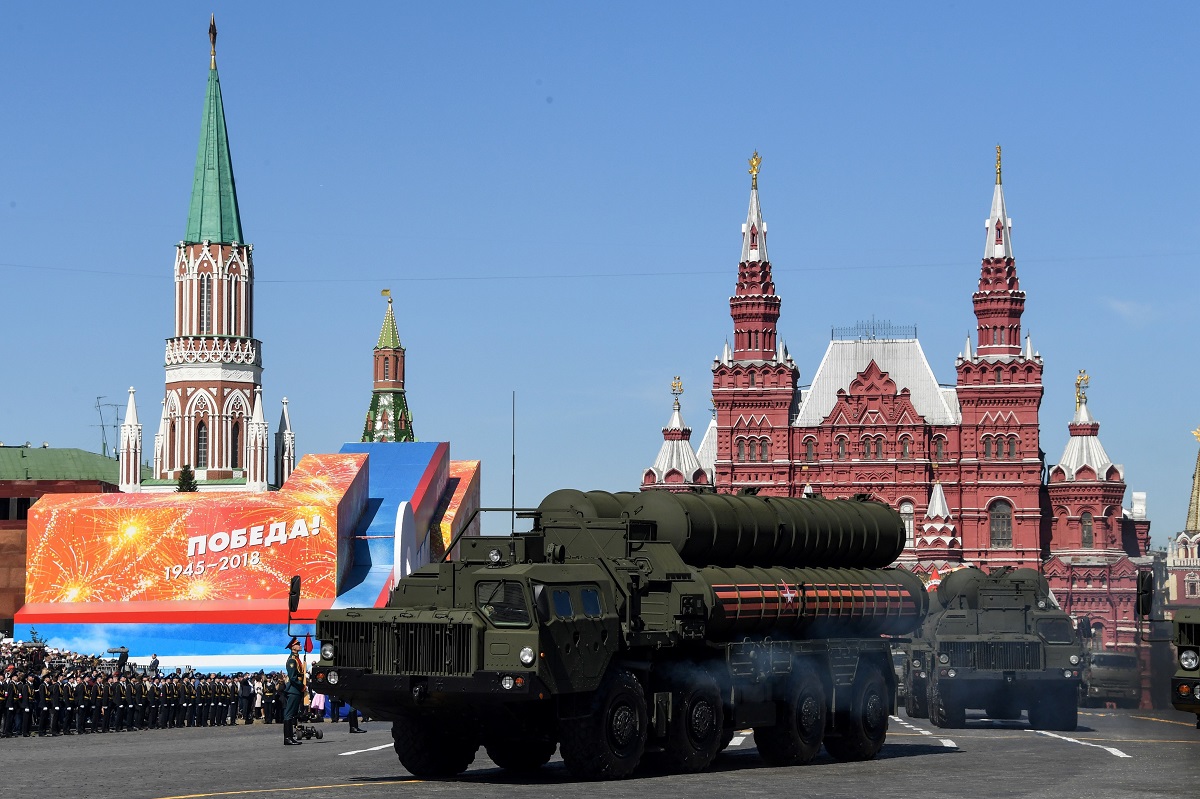 Russia's S-400 air-defense systems ride through Red Square during the Victory Day military parade in Moscow on May 9, 2018. (Kirill Kudryavtsev/AFP via Getty Images)
7 of 13 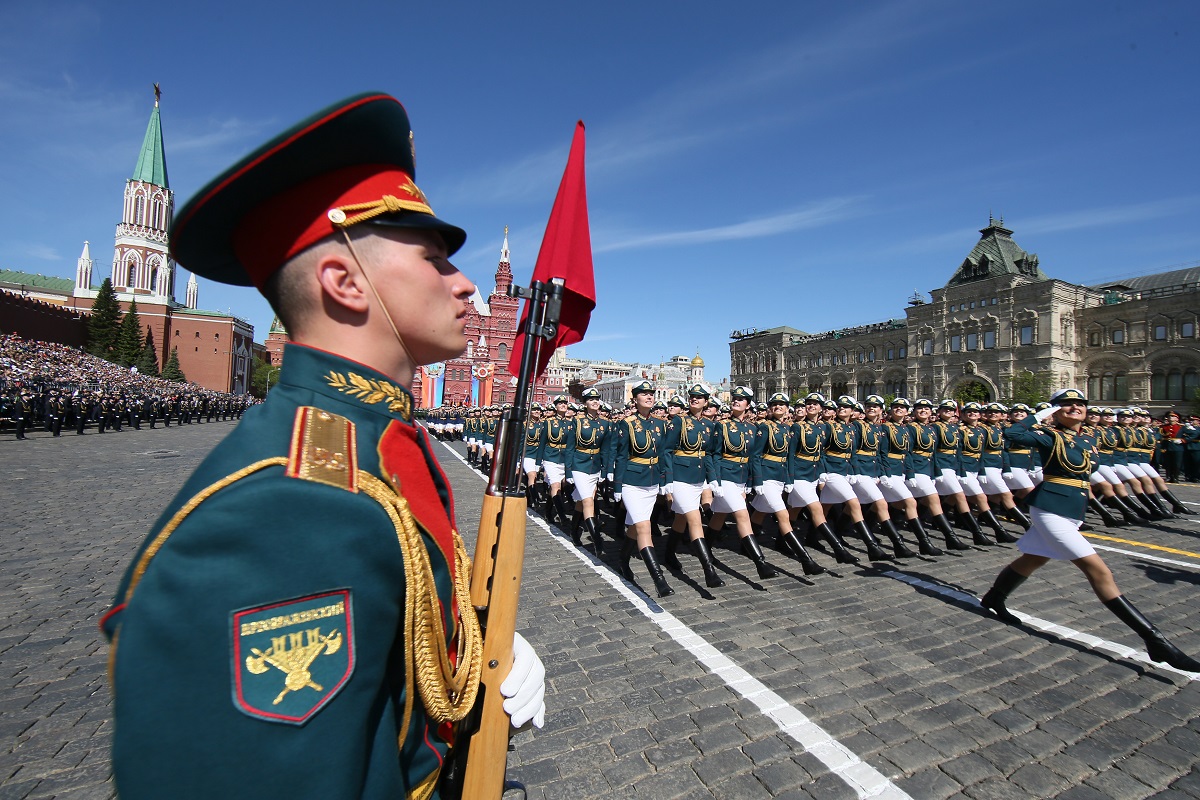 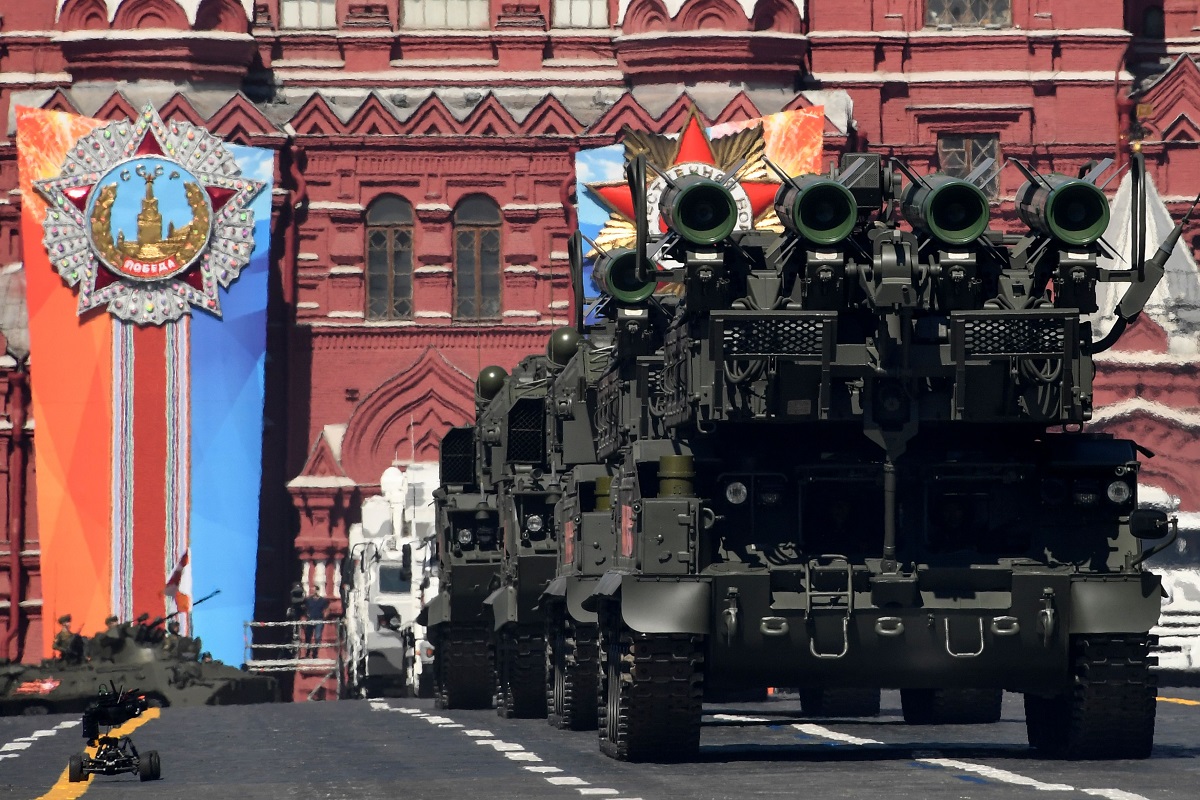 Buk-M2 air-defense systems parade through Red Square during a military parade on May 9, 2018. (Kirill Kudryavtsev/AFP via Getty Images)
9 of 13 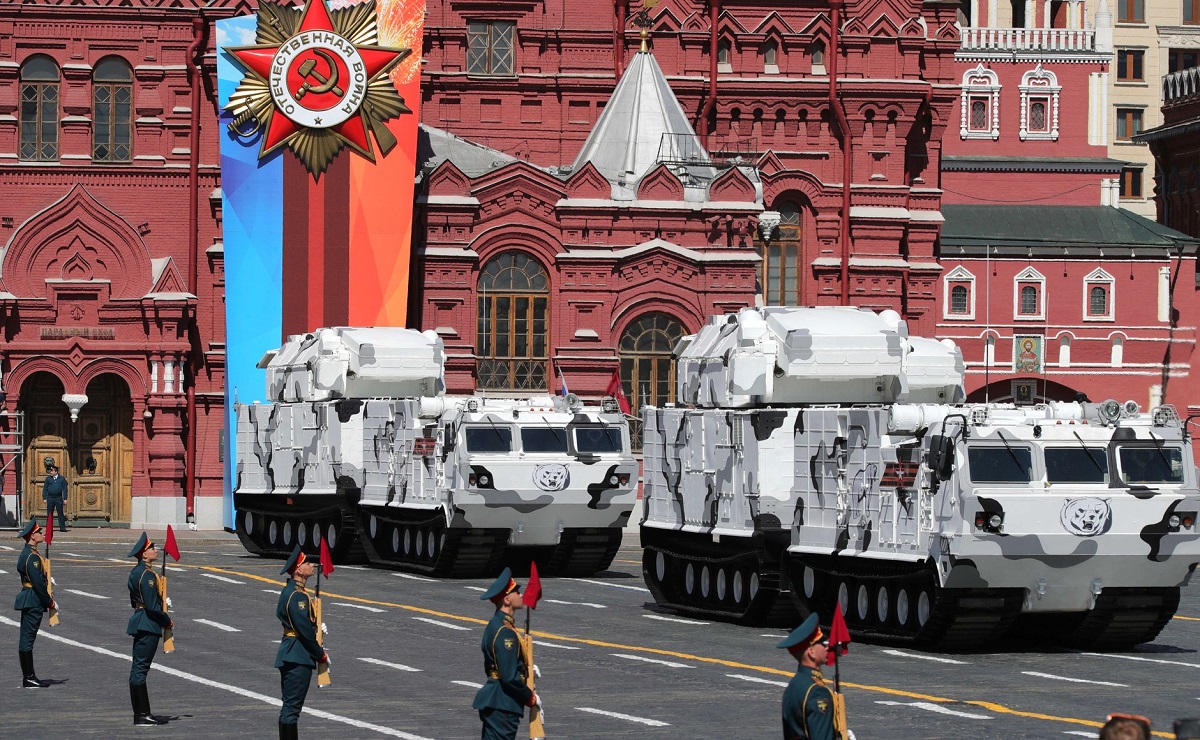 Tor-M2 anti-air systems in Arctic colors take to the street during a Russian military parade. (Russian Presidential Press and Information Office)
10 of 13 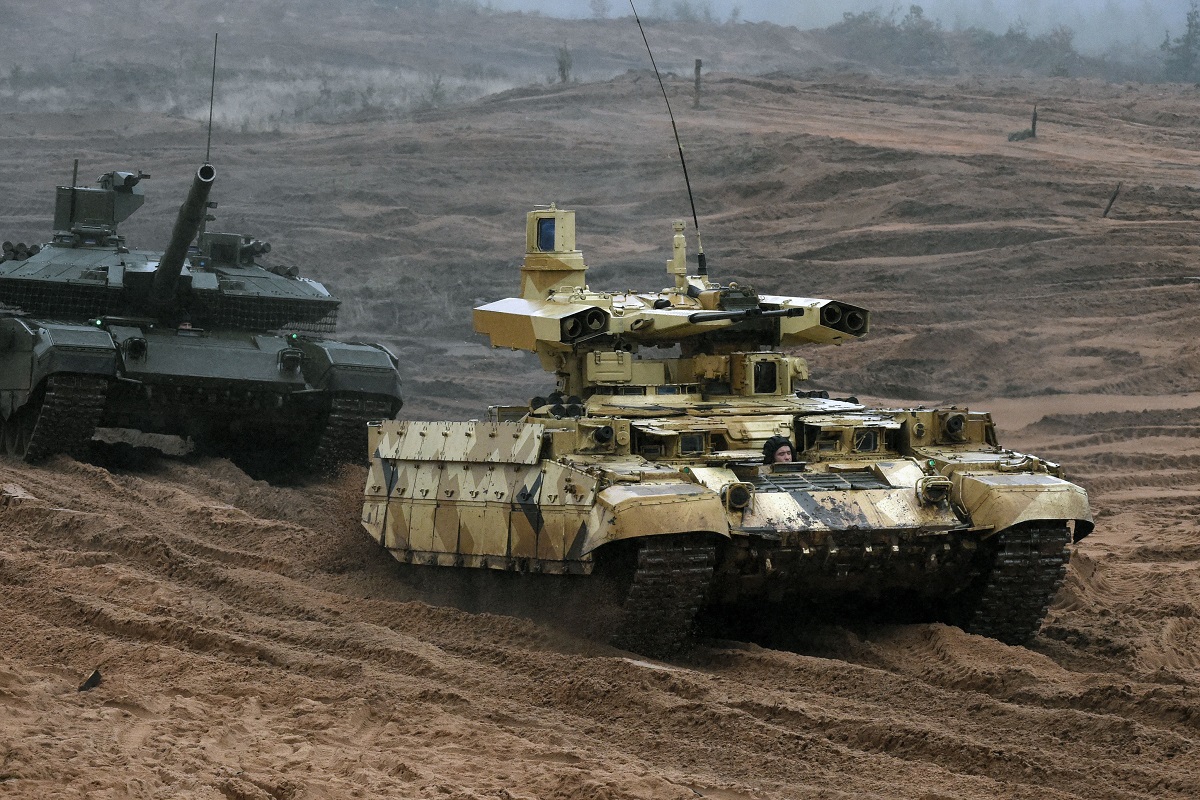 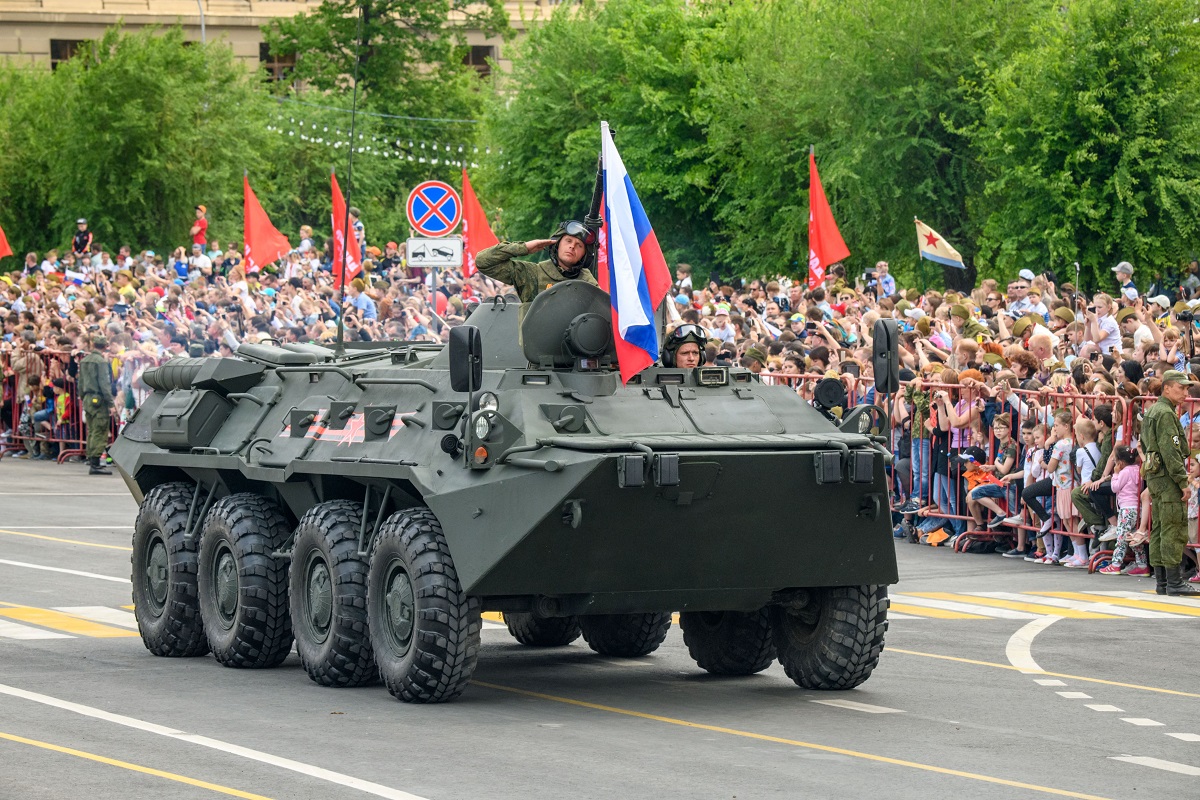 Russian military hardware takes part in the Victory Day parade in Volgograd on May 9, 2018. (Mladen Antonov/AFP via Getty Images)
12 of 13 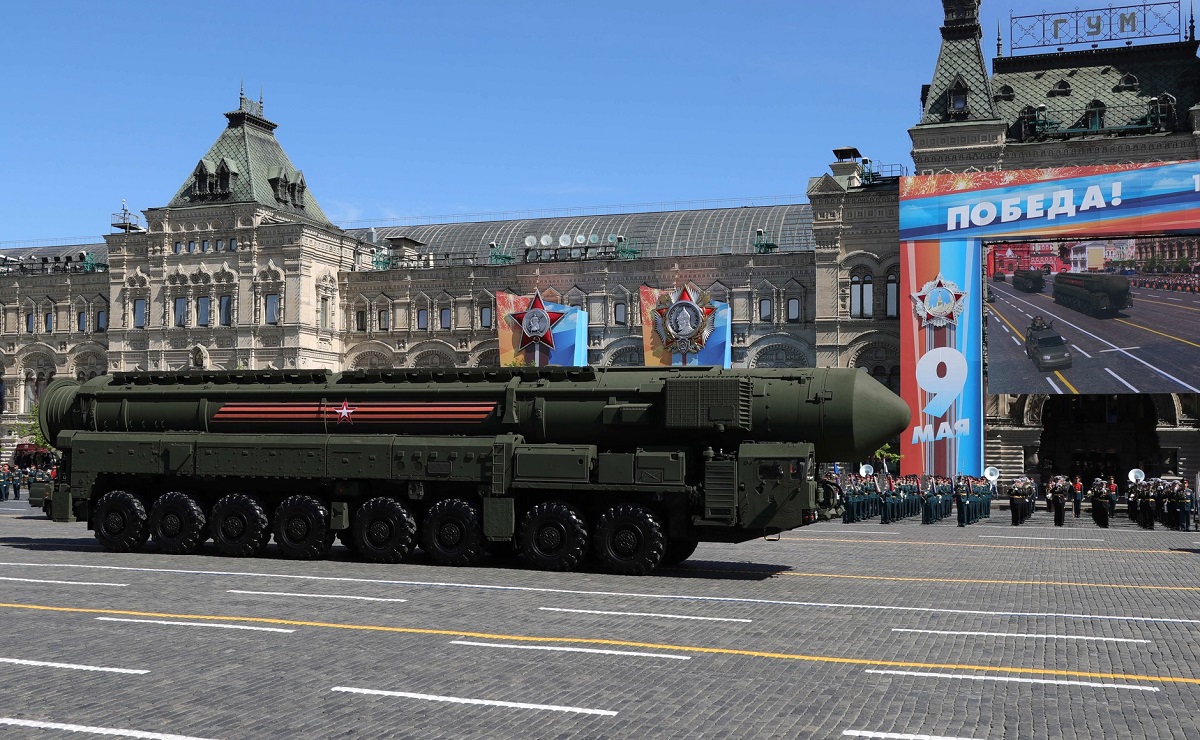 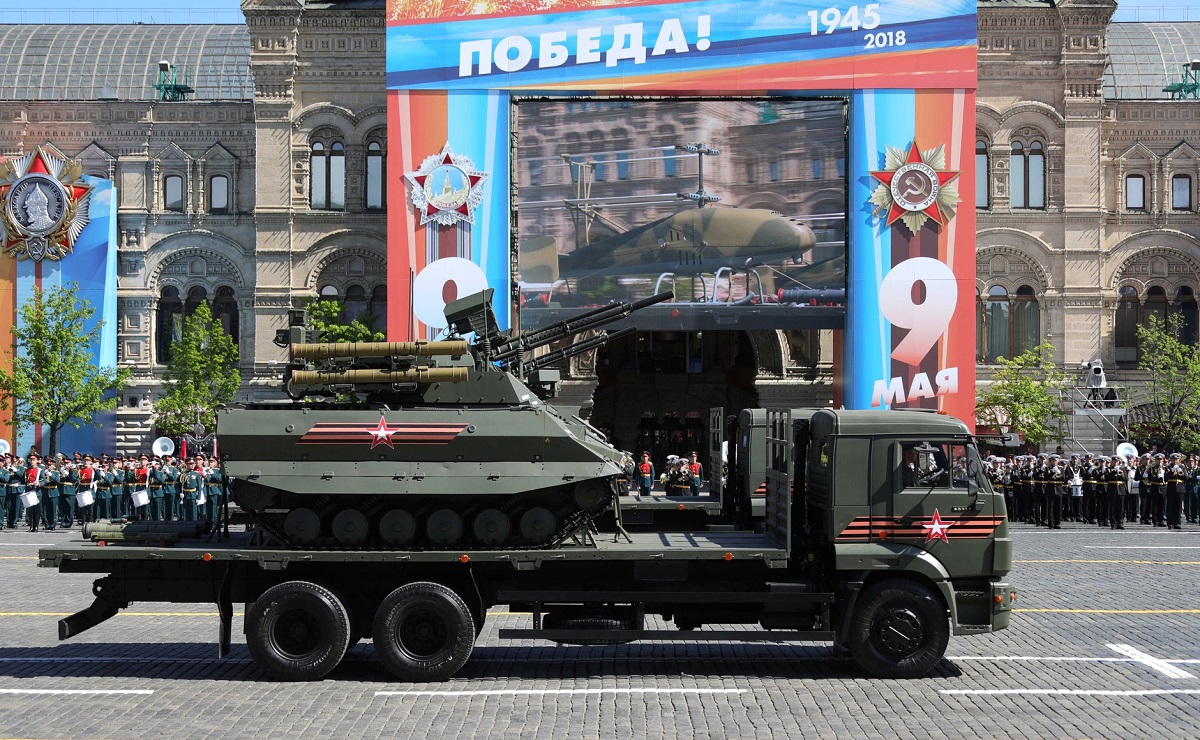 Attendees got a glimpse of the Uran-9 unmanned combat vehicle, which recently saw testing in Syria. (Russian Presidential Press and Information Office)

On the ground — apart from ground forces — attendees got a glimpse of the Uran-6 and Uran-9 unmanned combat vehicles, the latter of which recently saw testing in Syria.

But the biggest hitter seen in this part of the parade was the BMPT-72 Terminator tank. The heavily armed vehicle is built upon a T-72 chassis and armed with a variety of close-quarters and anti-tank weapons to provide infantry support in urban environments. It has been one of the most-talked about development projects since 2015’s unveiling of the T-15 Armata main battle tank. 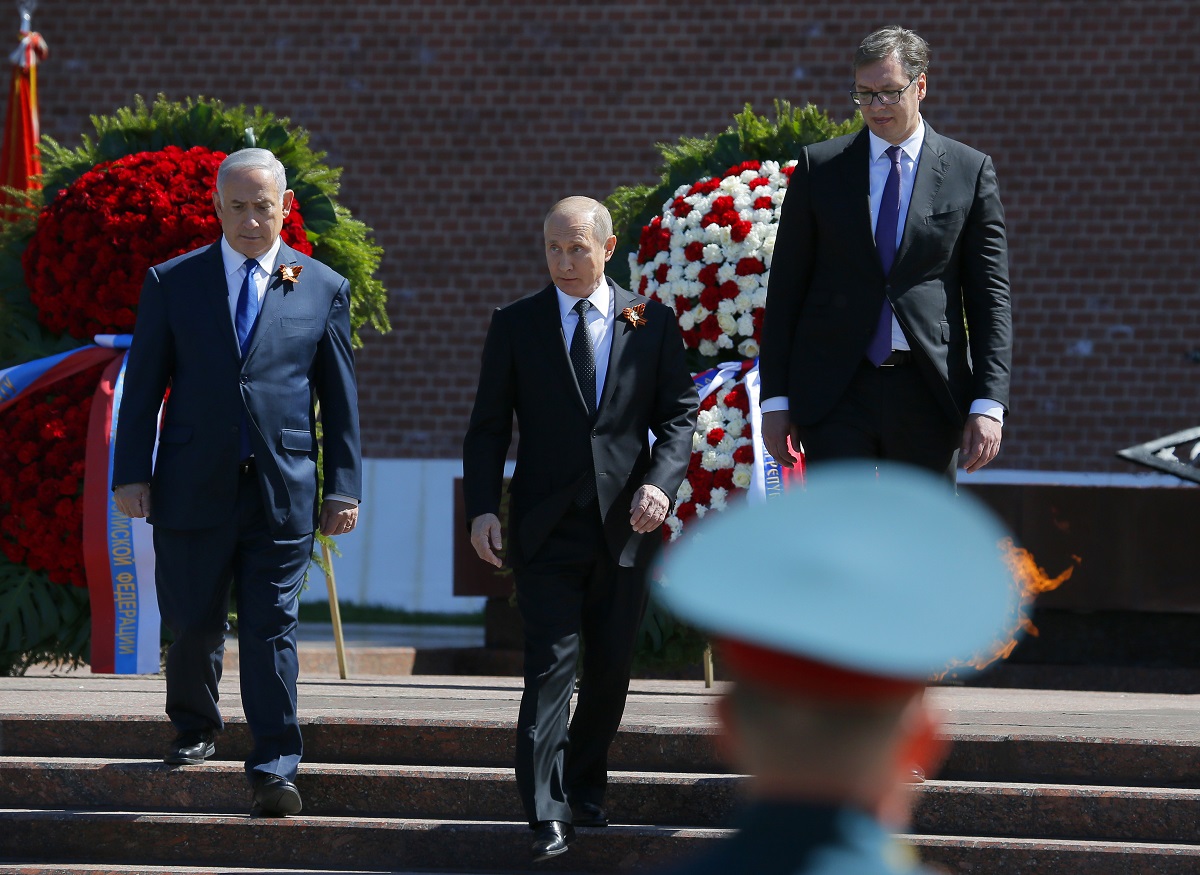 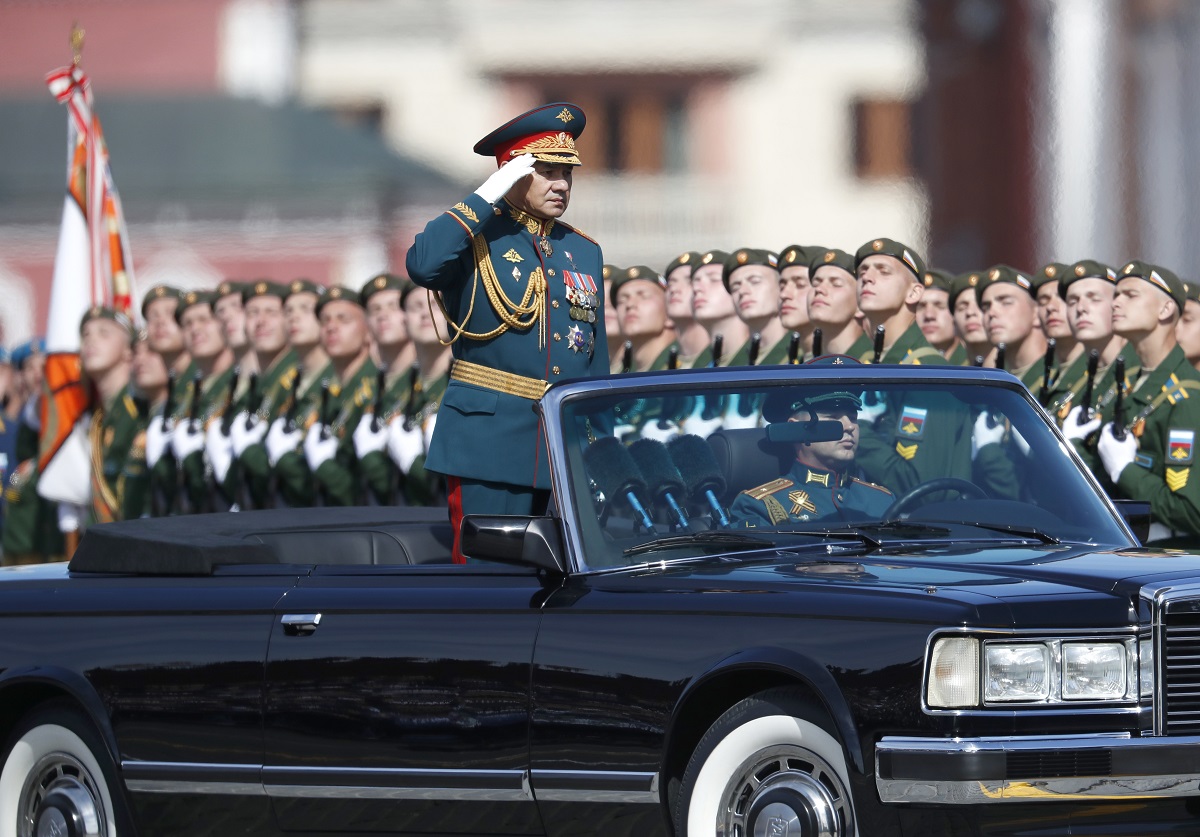 Russian Defence Minister Sergei Shoigu salutes as he inspects the troops during the Victory Day military parade to celebrate 73 years since the end of World War II and the defeat of Nazi Germany, on May 9, 2018. (Pavel Golovkin/AP)
3 of 7 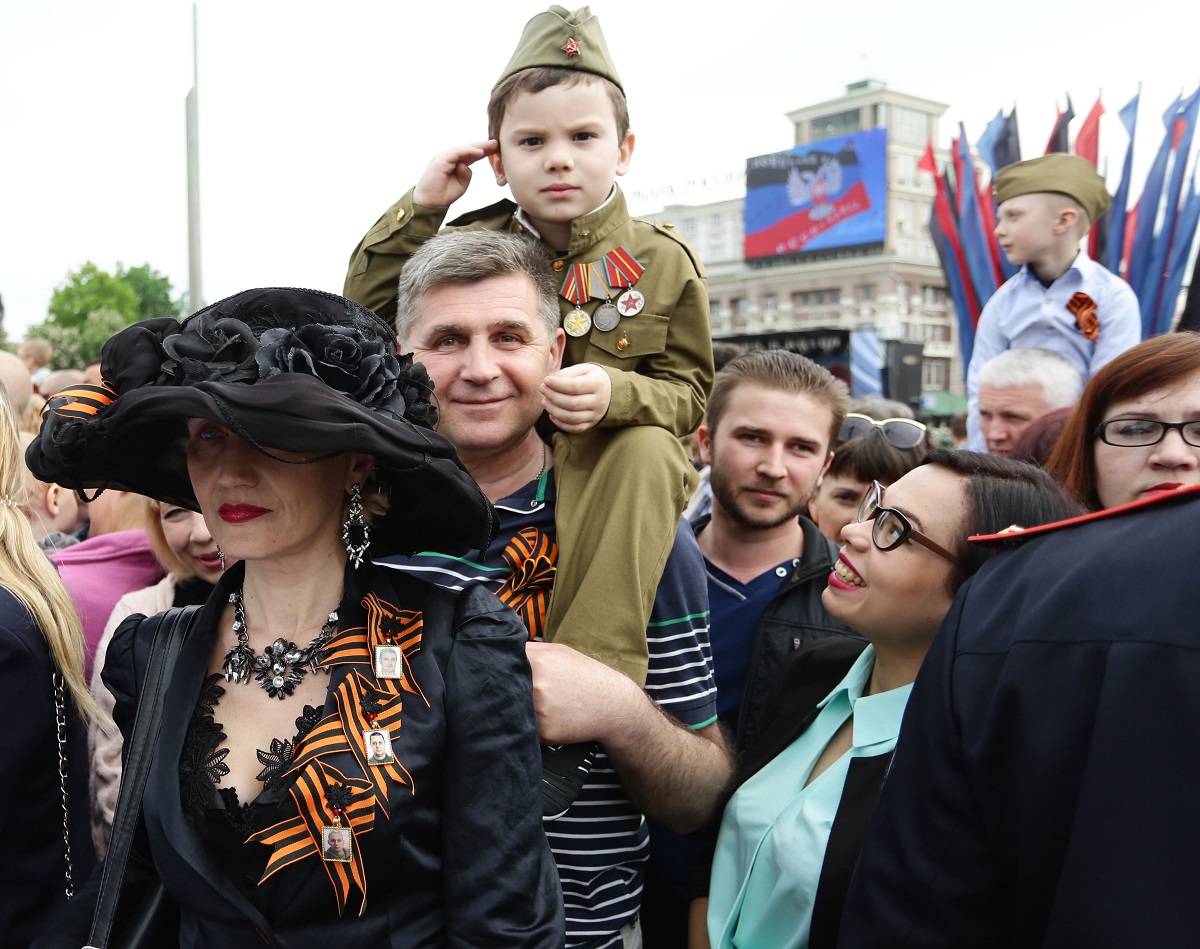 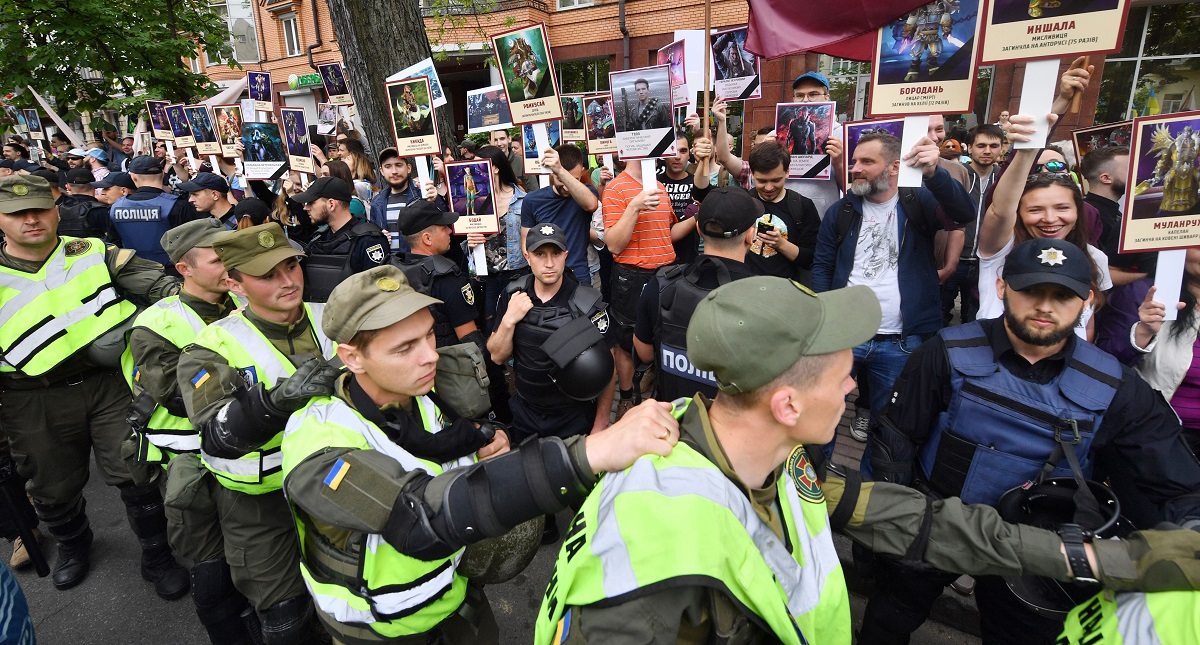 Policemen stand in front of protesters who demand to stop, as they say, pro-Russian actions, during the Immortal Regiment march marking Victory Day in Kiev on May 9, 2018. Some 35,000 people gathered in Ukraine's de facto rebel capital Donetsk to watch the parade. (Sergei Supinsky/AFP via Getty Images)
5 of 7 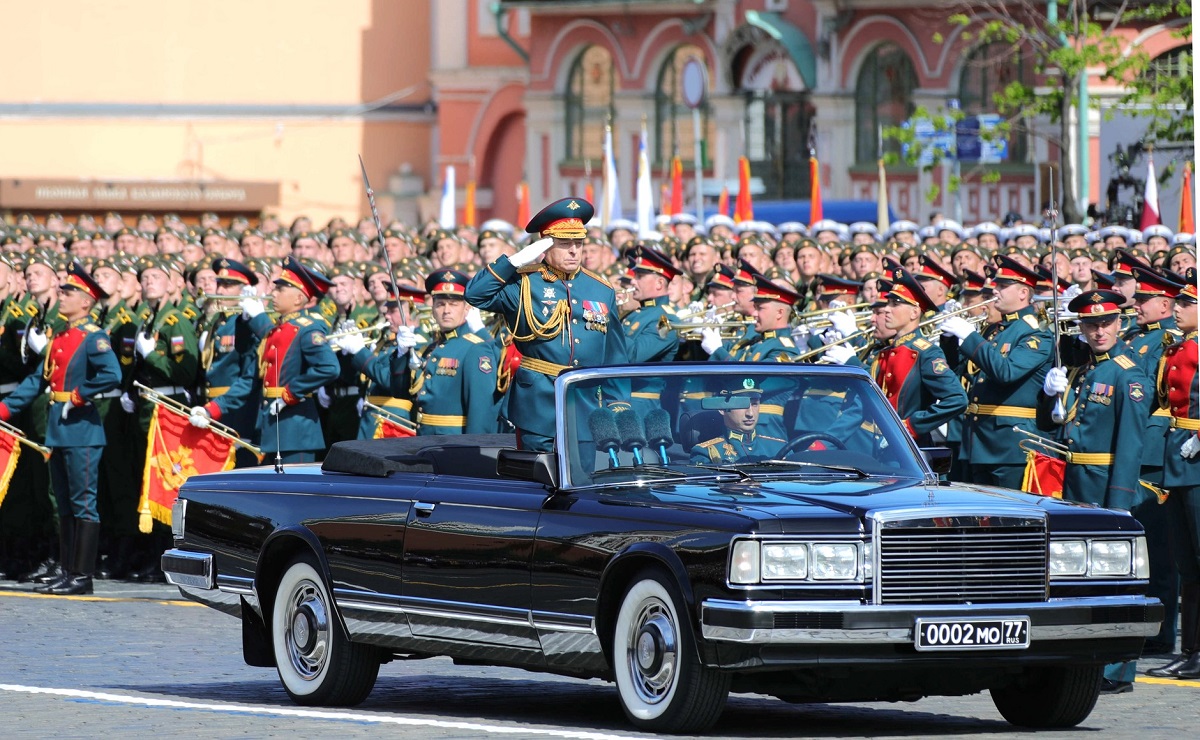 The commander of the Victory Day parade is the commander in chief of the Ground Forces, Col.-Gen. Oleg Salyukov. (Russian Presidential Press and Information Office)
6 of 7 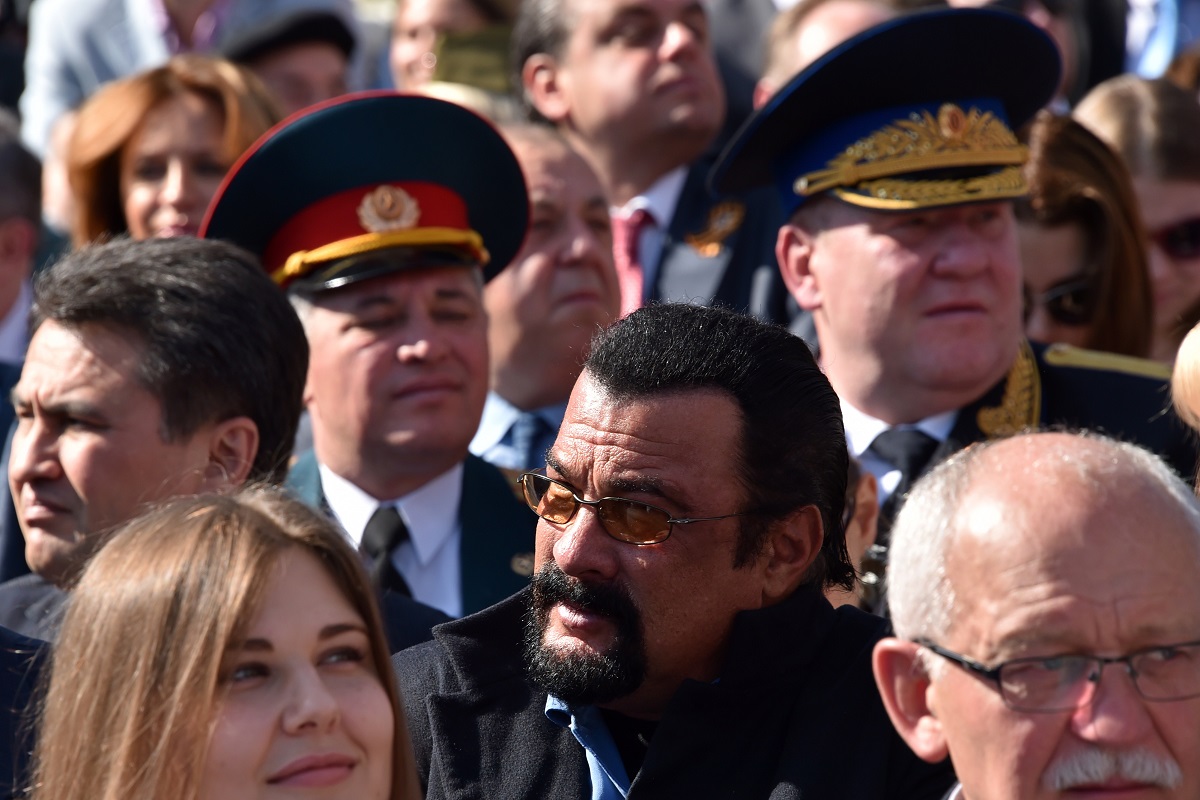 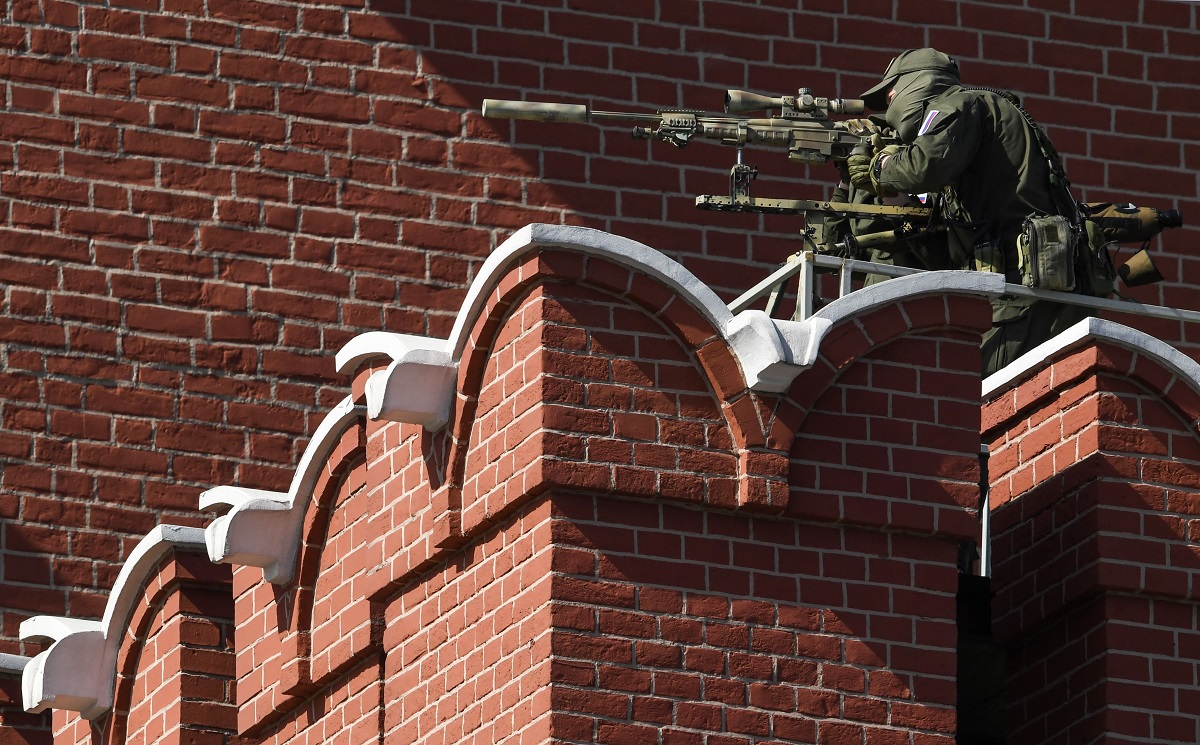 A Russian sniper secures the area prior to the Victory Day military parade at Red Square in Moscow on May 9, 2018. (Kirill Kudryavtsev/AFP via Getty Images)

And, of course, just as interesting as the hardware on display was who attended the parade. Putin’s guests of honor were Serbian President Aleksander Vucic and Israeli Prime Minister Benjamin Netanyahu.

During the parade, Putin gave a speech decrying attempts to rewrite the history of the war (read: challenge the Kremlin’s official patriotic narrative of those events).

In a move that is certain to find controversy in some quarters, Netanyahu was seen wearing an orange and black St. George’s ribbon, a Russian symbol that has seen newfound popularity in recent years as a patriotic token of Russia’s annexation of Crimea. It has strong associations with pro-Kremlin sentiments, and in Russia it is an easy way to signal anti-Western patriotism.

Steven Seagal was also in attendance.