WASHINGTON — U.S. lawmakers plan to closely question the Navy over a string of fatal mishaps at sea, when officials appear on Capitol Hill next week, said Rep. Rob Wittman, who chairs the House Seapower and Projection Forces Subcommittee.

A joint hearing of the House Readiness and Seapower Subcommittees on Sept. 7 will probe “underlying problems” with readiness associated with the collisions of the Arleigh Burke-class destroyers Fitzgerald and John S. McCain, two months apart over the summer. The incidents left dead 10 of the McCain’s sailors and seven of the Fitzgerald’s.

Even before the McCain and Fitzgerald collisions, there were two prior incidents involving the Japan-based U.S. 7th Fleet including a grounding and oil spill in Tokyo Bay and a collision with a Korean fishing boat.

Wittman, R-Va., recently returned from a trip to Japan where he visited the stricken destroyer Fitzgerald and spoke with crew members.

The trip had a profound effect on the lawmaker, who said Congress needs to makes sure the Navy gets to the bottom of what led to the string of increasingly serious incidents. “It’s just unbelievable the amount of damage to [Fitzgerald] and see what sailors went through on that ship,” Wittman said. “I think it causes all of us to ask some fundamental questions about what is happening within the Navy that allowed these incidents to occur.”

“These are the most advanced warships in the world,” he said. “They can do some miraculous things with Aegis and missile defense. But one of the most basic elements of our Navy is to be able to safely navigate. And that means not running into things or having things run into you.” 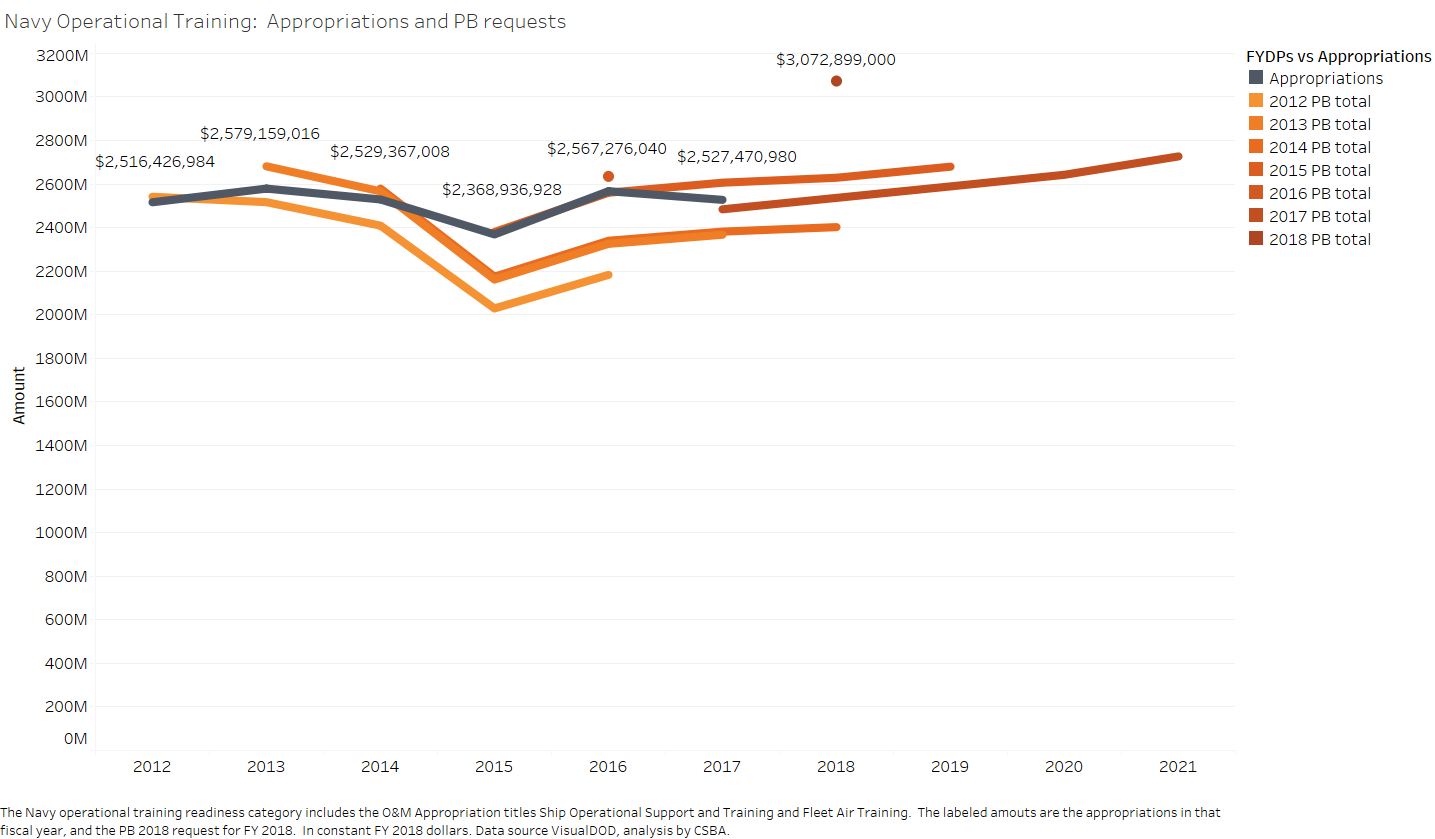 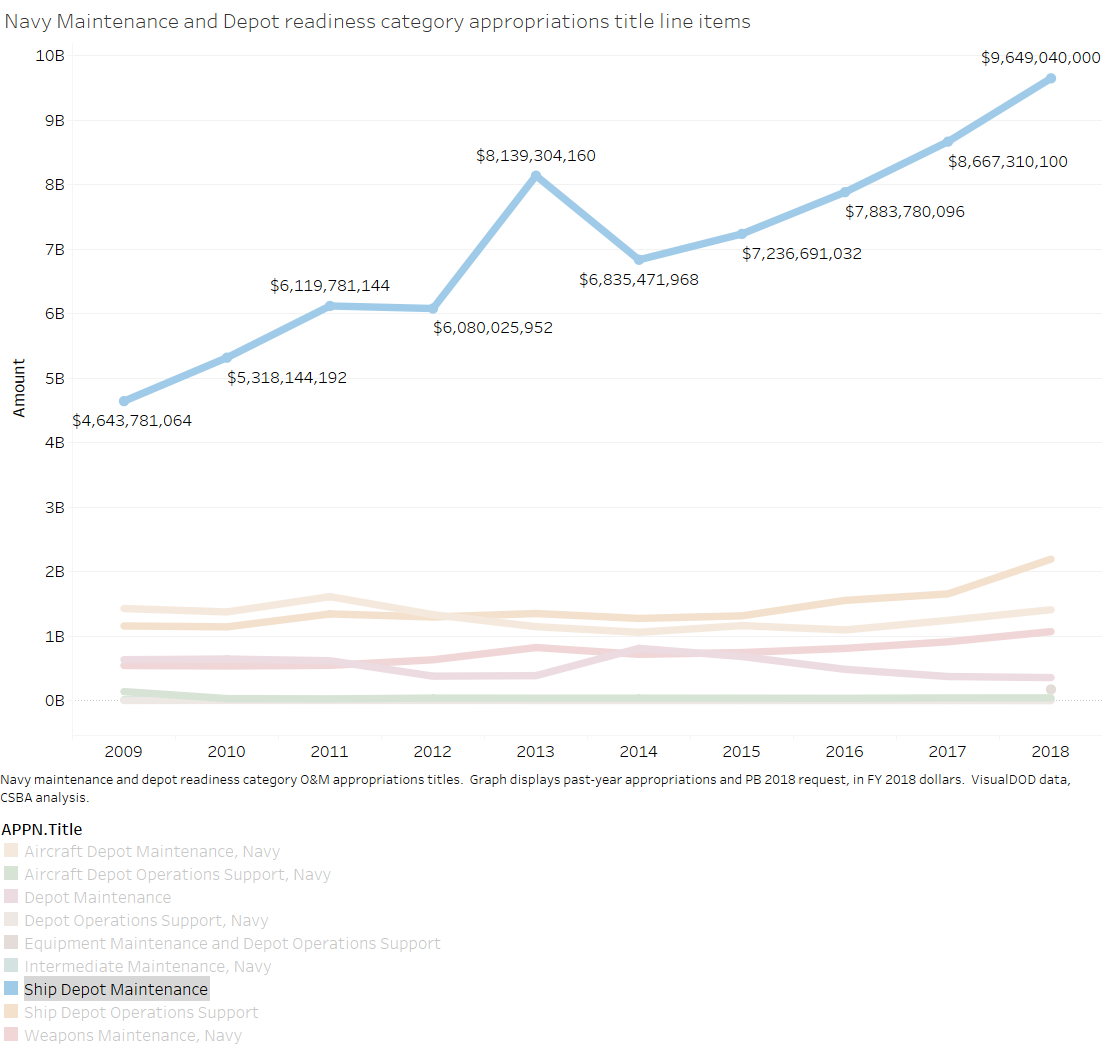 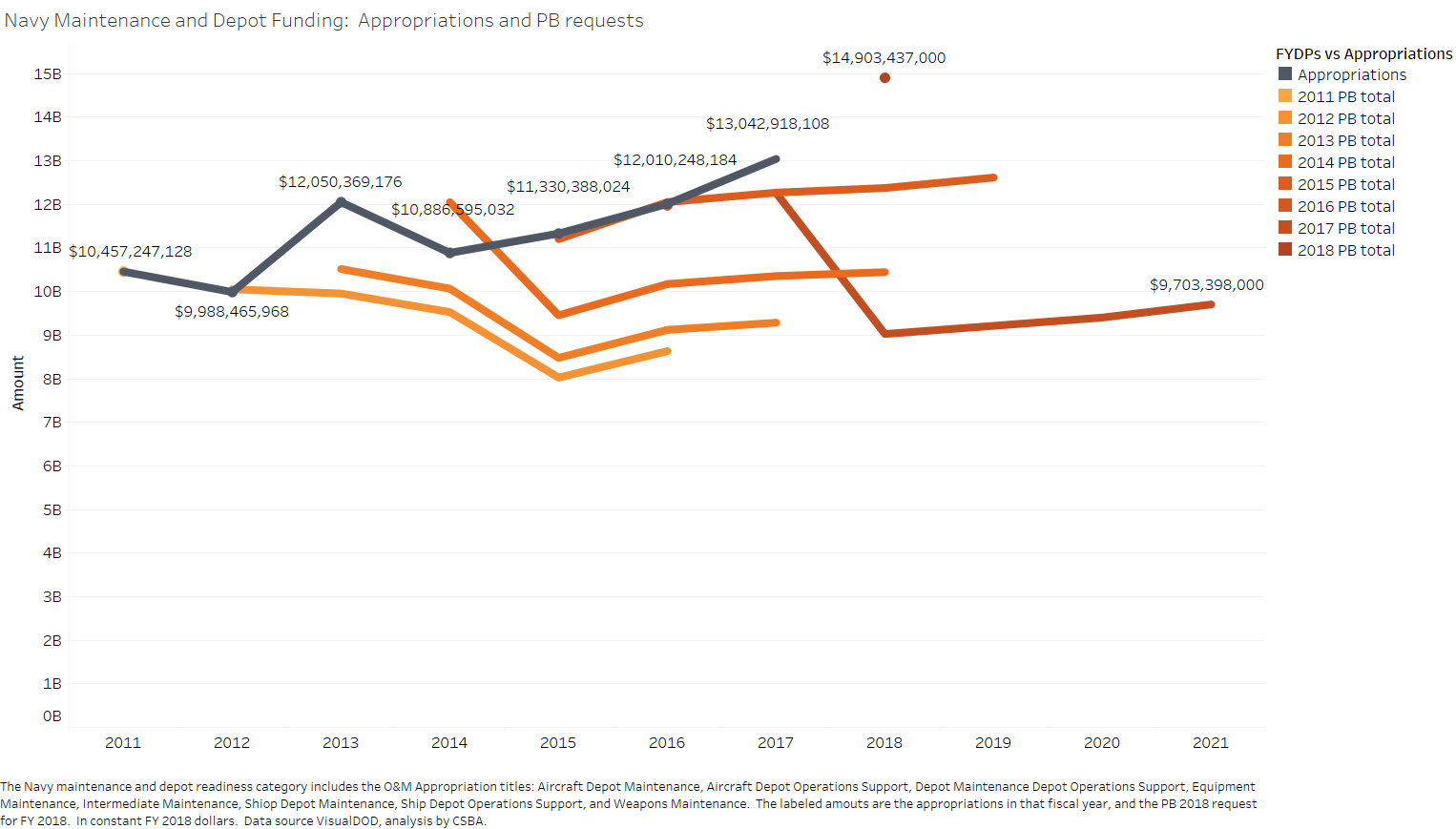 “We ask a lot of our men and women in the Navy. The time they spend at sea is increasing, while their ships age and their funding gets cut. These are just the conditions that can lead to an increase in the kinds of accidents we are witnessing,” he said in a statement.

Navy readiness-related funding has been trending higher virtually every year, according to Katherine Blakeley, a defense budget expert with the Center for Strategic and Budgetary Assessments. She studied the issue as part of forthcoming analysis of the president’s 2018 request for Defense Department operations and maintenance funds.

“If you look at those funding levels between 2009 and 2017, Congress has actually appropriated a smooth, upward line,” she said. “In every year except for two, it’s pretty much on the nose for what the Navy requested.”

While there was a smooth, upward trend for Navy maintenance and depot appropriations from $10.4 billion in 2011 to $13 billion in 2017, Navy budget lines that most directly contribute to near-term operational training were flat at about $2.5 billion annually, except for a dip in 2015 to $2.4 billion.

“From a training perspective it doesn’t look like there is a real pile of missing money for Navy sailors, Navy pilots and flight-support crew,” Blakeley said.

Budget caps do not appear to be the cause either, according to Blakeley. Funding levels have been consistently higher than future Pentagon budget plans offered by former Defense Secretary Bob Gates before Congress passed budget caps that some argue artificially depressed defense budgets.

“That says to me it needs more inquiry, and it’s not a question of there being no money,” she said. “Maybe the Navy is wrong in their estimation of how much money is needed, but Congress has consistently been appropriating more.”

A key question for lawmakers to ask is what percentage of the appropriated funding is being spent, Blakeley said. The Air Force has had problems with using training dollars because there are not enough ready aircraft, and it’s unclear whether the Navy faces a similar issue.

Another question is whether the Navy has been requesting as much for operations and maintenance as it has needed.

Tom Callender, a former Navy director of capabilities, said that often cuts in the Navy budget request mandated by the Office of the Secretary of Defense were taken out of the service’s operation and maintenance account.

“By cutting the operations money, I’m cutting the flying hours, and we’re seeing issues with aircraft in the Marine Corps,” said Callender, now with the Heritage Foundation. “What I used to be able to do as a junior officer is take a week to get my guys qualified and evaluate my own proficiency, and that’s gone by the wayside.”

Callender tied what he sees as a lost focus on basic seamanship and navigation to an inadequately sized Navy and its maintenance shortfalls.

“The Navy’s not big enough and we don’t have enough sailors manning our fleets,” Callender said. “When they’re underway, they’re devoted to operations at hand and what maintenance they can get done. And what’s been left by the wayside is the time devoted to training in port and underway.”

Callender also pointed to cultural issues, including changes in the career path for officers in recent years and an over-reliance on technology for navigation.

“There needs to be a culture change in the surface community, a come-to-Jesus looking at refocusing on basics, and it is going to take money,” he said.

Todd Harrison, the director of defense budget analysis at Center for Strategic and International Studies said it would be wrong to view the issue as solely about shortfalls, given the defense budget today is as high as it was at the peak of the Reagan buildup and given the fleet is much smaller than it was in the 1980s.

Still, in line with Blakeley’s assessment, Harrison said the tough question for Navy leaders is whether they knew they had readiness problems they did not address in budget requests to Congress.

“The question we should be asking is: If the Navy knew it had a readiness problem and that the crews were not adequately prepared for basic navigation and safe operations, then why were they allowed to go to sea?” he said. “If the Navy knew they weren’t ready, they should have never left port.”

(From the Sponsor) Getting pre-approved should be your first step in the home-buying process.